Great art style and interesting story line are not enough to pull Blackguards 2 from mediocrity.

Posted By Oliver VanDervoort | On 27th, Jan. 2015 Under Article, Reviews

When it comes to a game like Blackguards 2, storytelling is a big part of what is going to make or break the game. Unfortunately for Daedalic Entertainment the story telling is just part of what seems a little bit broken when it comes to this adventure game. There are certainly good things about the way Blackguards 2 was put together. The art style is something that stands out among an ever-growing crowd. The graphics are made to look as though they are hand painted and Blackguards 2 is very pretty thanks to this particular effect. The problem is that the rest of the game doesn’t really live up to the promise brought on by that impressive art style.

As I said in the beginning, when talking about an adventure game like Blackguards 2, the storytelling is the thing. It seems as if the writers for this particular game went out of their way to make the beginning of the game especially confusing. I started out as Cassia who had been taken out of her palatial palace and put into the dungeons far below and left with no one to talk to but a single solitary guard and a number of giant mutant spiders. 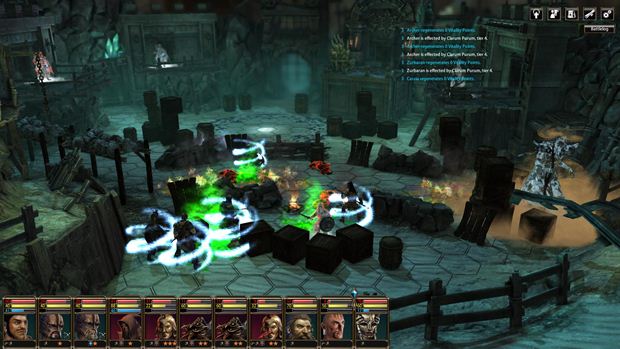 "It seems as if the writers for this particular game went out of their way to make the beginning of the game especially confusing."

It’s possible Blackguards 2 does this specifically because Cassia eventually does go a bit nutty and it plays into that nuttiness to not really know why you have been captured and stuck in prison. To me, it just came off as clunky writing from people who didn’t want to spend all that much time filling in a back-story. That back-story does eventually get filled in, in bits and pieces as I played throughout the game, but not enough and not near quick enough.

The beginning of the game is also a bit annoying because it walks you through a tutorial that literally serves no purpose but to teach you the absolute basics of movement and battle. For reasons passing understanding, while you are a prisoner in the dungeons, you are able to come and go as you please into mazes that run throughout the catacombs. Once I got through the first run-through of this maze, the game might as well have said, “we wanted you to waste five minutes.”

In this first run through, I did figure out how to move around the map and fight the spiders that lived in those catacombs. This also becomes an important plot point because Cassia wouldn’t be able to lose her mind if not for how this particular part of the story is laid out. That doesn’t make starting off all that entertaining or engaging, even once I realized why exactly they had me do it that way. 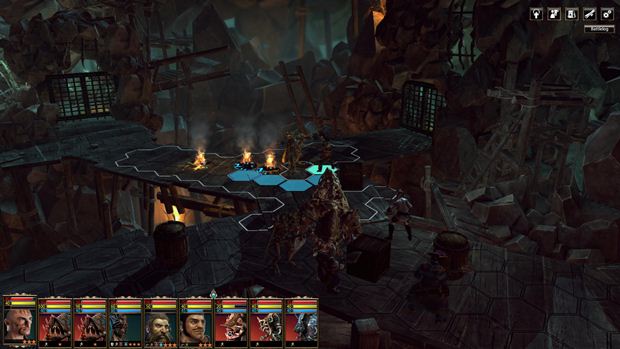 "While there is plenty that went wrong with this game, the art style isn’t the only thing that went right. Despite some rather clunky interactions between the characters, there is also enough dialogue (written, never spoken out loud) that I really did get a feel for the rather dark and foreboding world of Blackguards 2."

This first little bit is also where I found the second thing that makes Blackguards a game that isn’t calling out for me to play it over and over again. The movement controls are rather clunky and seem uneven at times. One “turn” I can simply click a square I want to move to and will see my character move right away. Other times I was having to double and triple click in order for the game to figure out I wanted to move.

The same can be said for manipulating items inside the world. Moving levers is a big part of the early portion of the game, (though there doesn’t seem to be a reason since they are never locked nor hidden). You need to pull a lever in order to raise or lower an obstacle so that you can continue on the map. At times, the lever is easily illuminated and quickly manipulated. Other times, I had to move all the way around the lever in a circle in order to find the right square (which didn’t seem to be any different in position from any of the others) that would actually allow me to pull the lever.

While there is plenty that went wrong with this game, the art style isn’t the only thing that went right. Despite some rather clunky interactions between the characters, there is also enough dialogue (written, never spoken out loud) that I really did get a feel for the rather dark and foreboding world of Blackguards 2. While you start off as the single solitary Cassia, there are other characters along the way, both those that join your party and those you go up against that have plenty of personality. 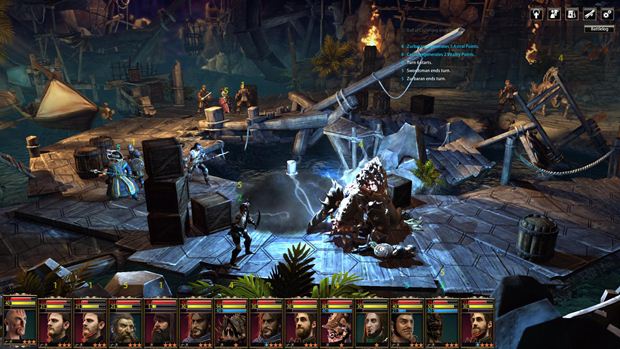 "There is something to be said for an added layer of strategy against the tougher enemies here as well but eventually Blackguards 2 just seems to feel like a game where I’m constantly fighting against a game that was perhaps a bit too smart for its own good."

Blackguards 2 is the perfect game for those who enjoy adventure games for their long battle scenes that can require a great deal of strategy in order to complete them with your party in tact. The further I went into the game, the longer the battle scenes seemed to take. This is great for the side of me that loves to plan out every move and see a real battle unfold. It was less appealing for the side of me that started to really just want to move onto the next scene and see if the story was ever really going to take me to a place that was satisfying.

Part of the problem when it came to the length of the battles is that most of the hits simply don’t take away that much damage. When you’re fighting enemies that only have five hit points, that’s enough to kill in one blow. When you are facing off against tough enemies that are harder to kill, it can be quite annoying to muster up your best weapon or best spell and watch it bounce off nearly harmlessly. There is something to be said for an added layer of strategy against the tougher enemies here as well but eventually Blackguards 2 just seems to feel like a game where I’m constantly fighting against a game that was perhaps a bit too smart for its own good.

The memorable characters and a storyline is certainly different from most other adventure games you’re going to find on the market and it almost makes up for it, but for a game like this, I need to want to spend hours at a time really getting into the world. Blackguards 2 didn’t have that kind of pull for me.

Interesting storyline and a great art style give this game a good start. Being able to embrace the madness of the main character gives Blackguards 2 an original feel.

The storyline might be original but it isn’t flushed out enough. The controls are clunky and unresponsive at times.

This still feels like an Alpha or a Beta version that needs to be fleshed out a bit more before it’s release. The problem is, it has been released.

A copy of this game was provided by developer/publisher for review purposes. Click here to know more about our Reviews Policy.
Tagged With: Blackguards 2, daedalic entertainment, pc