I n many circles, “Anime fighter” can be seen as dirty words, and this isn’t without cause. While many of the top fighting games of the day have amazingly dedicated competitive communities around them, its not unheard of to have an evening of Street Fighter or Smash Bros. with friends. However, the intimidating sub-genre that Blazblue finds itself in does little to seduce new audiences.

Continually growing plot webs thicker than badly prepared ramen, box-standard Japanese character designs and archetypes, levels of exposition that would make Hideo Kojima blush and a fighting system that demands dedication tend to send potential new players running back to more friendly tussles like Tekken. By the third entry, Blazblue: Chrono Phantasma isn’t exactly an exception to the rule, but its not completely leaving those jumping in now completely in the dust either. 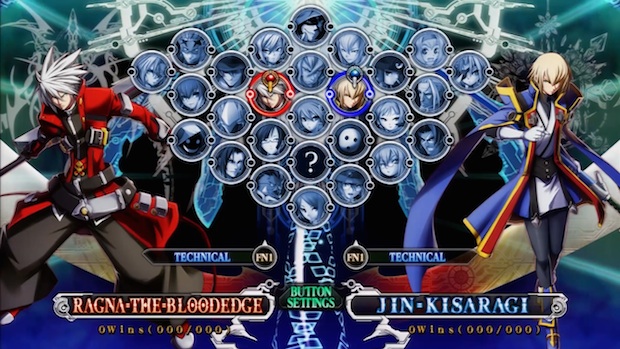 "All the mechanics, genre standard and unique, fit together like Legos, creating a highly offensive fighter..."

Presentation wise, the sleek anime visuals are gorgeous and the entire game runs at a speedy sixty frames per second. The developers, Arc Systemworks have been around the block by now and know how to build a great fighter right down to the pixel. All the mechanics, genre standard and unique, fit together like Legos, creating a highly offensive fighter where finding that balance between getting in your adversaries face and pushing him out of yours becomes key.

An expansive fantasy, rock and j-pop inspired soundtrack meshes with the large, colourful cast of characters to give a distinct style to the series, and all are very well developed, being distinct and interesting in both play style and backstory if you take the time with them. All the modes you would expect are present and accounted for, including arcade, multiplayer both online and off, amazingly in depth training modes and a very extensive story mode, one that might take its name too literally in fact.

Story mode tells the ongoing saga of the series with three intertwining arcs, mainly following a handful of major players as they pursue their personal goals in Ikaruga. It’s not overly difficult for a newcomer to pick up the ongoing thread, and a separate mode even helpfully breaks down some of the more complex jargon in a delightful chibi style. While even a cursory summery of the plot would go on longer than this review, the heavily political tale leverages its detailed characters to keep interest in the story alive, but tensions escalate all too infrequently. 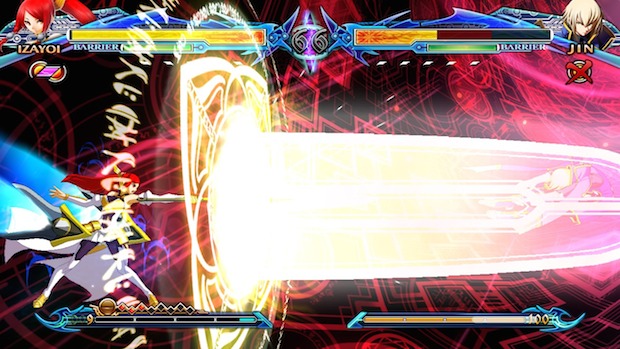 "The occasional one round or half round battles often flit between characters as well, giving players little time to get accustomed."

Affairs will unravel for hours and chapters on end, yet when it comes to actual battles they are stunningly infrequent, even sometimes bordering on teasing when characters choose to talk it out. The occasional one round or half round battles often flit between characters as well, giving players little time to get accustomed. Occasional dialog branches offer non-cannon, often humorous spin-offs to the story that are worth seeing through once stumbled across, but as it’s impossible to know whether you’re continuing the actual story or going into one of these offshoots, they could also be seen as interruptions. Because of how long-winded this mode can get, I frequently found myself putting dialog on auto-play, opting to find other avenues to passively entertain myself while “playing” an entertainment product

A much more gameplay focused and genre standard experience can be found within modes such as arcade, which give a truncated version of the plot over the course of eight battles. The wide cast is available to you from the start to play with, and offers a more character focused take on the story that otherwise switches around and leaves many under explored.

A highly in depth training mode gives you the tools to tune your game and the tutorial introduces the staples of the genre along with unique systems of the game, including two separate control schemes. A newcomer friendly, Marvel VS Capcom-esque “Stylish” mode makes combo’s easier and helps with learning new characters, while “Technical” mode shifts into manual gear, demanding players take command of combos and tuning spotless specials. Score attack style modes challenge players to progress against waves of extreme enemies and demand perfection of technique. 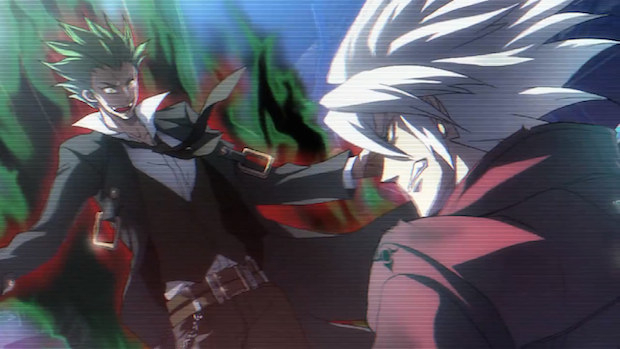 "Other special effects can also be gained, such as extra jumps, health regeneration and meter benefits that can open up new, interesting strategies, only viable in this interesting mode."

Of particular note is the Abyss mode. This unique blend of styles plays something like Tekken’s Ghost Battle, Smash Bros Subspace Emissary and Soul Calibur’s Tower of Souls. Players take their fighter of choice through a variety of gauntlets, As you descend through these increasingly difficult challenges, and take down the boss fighters that pop in every now and then, you grab stat upgrades that function much like the stickers in Super Smash Bros Brawl.

By building up your fighters base speed, strength, defence and meter abilities, among others you gain a sense of real progression and feel more up to the progressive challenge of the mode. Other special effects can also be gained, such as extra jumps, health regeneration and meter benefits that can open up new, interesting strategies, only viable in this interesting mode.

In a genre where you get laughed out of the room for anything less than perfect net code, the basis of what you can expect from a fighting game when it comes to online is fairly consistent. All the usual suspects are present, ranked and player matches offer serious and more casual play respectively. Leaderboards and player cards keep track of win loss records overall and by character to get an overall view of skill and player kept lobbies can be customized to a heavy degree to fight with friends however you might want. 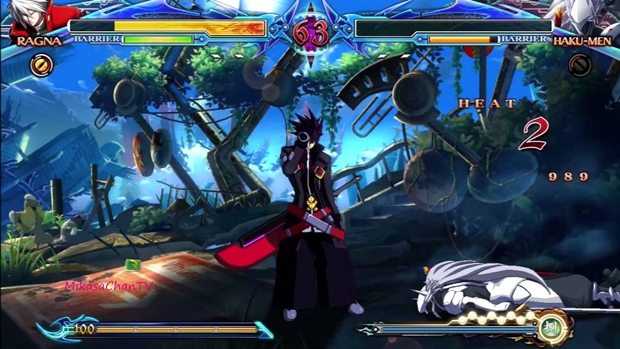 "Spend some time in Ikaruga though, learn the language and meet the people and its hardly impossible to catch up."

Replays can be downloaded and viewed, as well as saved for later study. The game rather uniquely offers a passive online search, letting you dive into practice or play another round of arcade while waiting on a Japanese kid to pummel you. The aforementioned net code is solid as a rock too, making sure that when you are in a skirmish against someone across the globe, your blows are responsive.

Blazblue: Chrono Phantasma knows exactly what it wants to be, and has its audience in its sights already. Fans have already jumped in to follow the continuing story and to pour over the new systems and features. While Chrono Phantasma makes a few concessions towards the newcomers, its tortuously drawn-out story and complex characters that demand a lot of time to learn send would-be brawlers face first into a learning curve like a brick wall.

Spend some time in Ikaruga though, learn the language and meet the people and its hardly impossible to catch up. Once familiar, the staggering amount of content spanning from score attack leaderboard chasing to online skirmishes should keep any fighting fan very busy.

The world of Blazblue, and the people in it are as developed as ever. Abyss mode, as well as the other fighting focused options are great. Stylish mode and the fantastic training options give new players an on-ramp. Visually stunning presentation and excellent soundtrack. Rock solid net code.

Rambling story mode drones on for hours with little gameplay, and borders on teasing at points. Peripheral story branches can't be predicted, interrupting the flow.

Fighting fans will find a lot to dig into here, and if new players know what their getting into with this, Blazblue: Chrono Phantasma gives them all the tools to get into the battle themselves.

A copy of this game was provided by developer/publisher for review purposes. Click here to know more about our Reviews Policy.
Tagged With: Arc System Works, BlazBlue, BlazBlue: Chrono Phantasma, ps3