The new Season Pass kicks off with the beloved yo-yo wielding bounty hunter who returns with a new look and Roger, the deadly teddy bear.

A new beta released for Persona 4 Arena Ultimax now adds the much-requested rollback netcode feature that the community has been asking for.

The 2.5D fighting game features 16 characters from Nexon's Dungeon Fighter Online and is out today for PS4, PS5 and PC via Steam.

Using the power of gravity and portals, the Lost Warrior is capable of quick movement, unpredictable attacks, and energy blasts.

Armed with a shotgun, large sword and lots of explosives, the Troubleshooter is known in the Lawless District for solving nearly any problem. 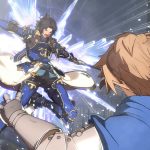 Tactical Moves "Rush" and "Backshift" are being added along with Overdrive which boosts attack, adds chip damage to moves and more.

Players can also view Ranked Match Records for each character along with Battle Records for their Win Streak and other stats.