The first time I saw Blazing Chrome, I knew I had to play it. I don’t know what Joymasher’s impetus for making it was, but I like to think it was because they realized that there weren’t enough Contra and Metal Slug games in the world, and they were tired of waiting on Konami and SNK to give us more, so they decided to do it themselves. It’s the kind of game that wears its inspirations on its sleeve: visually, it looks like something out of a post-Skynet Terminator. There are glimpses of Metal Slug in the game’s melee system. Everything else, though, is a heaping helping of Contra III: The Alien Wars. The game is retro through and through; there are even filters to match the look of old CRT TVs. Once I found them, you can be damn sure I turned them on.

The game’s plot is simple. Blazing Chrome is set in a post-apocalyptic world where robots battle humans. Humanity is losing.  You play as Marva or Doyle, the only surviving members of a suicide mission behind enemy lines. Marva’s a badass who literally kicks ass a chews bubble gum, while Doyle’s a reprogrammed robot with a mohawk and questionable fashion sense. They’re an odd team, but both characters have personality: let Marva idle too long, and she’ll blow an enormous pink bubble, while Doyle likes to rock out at the end of missions. 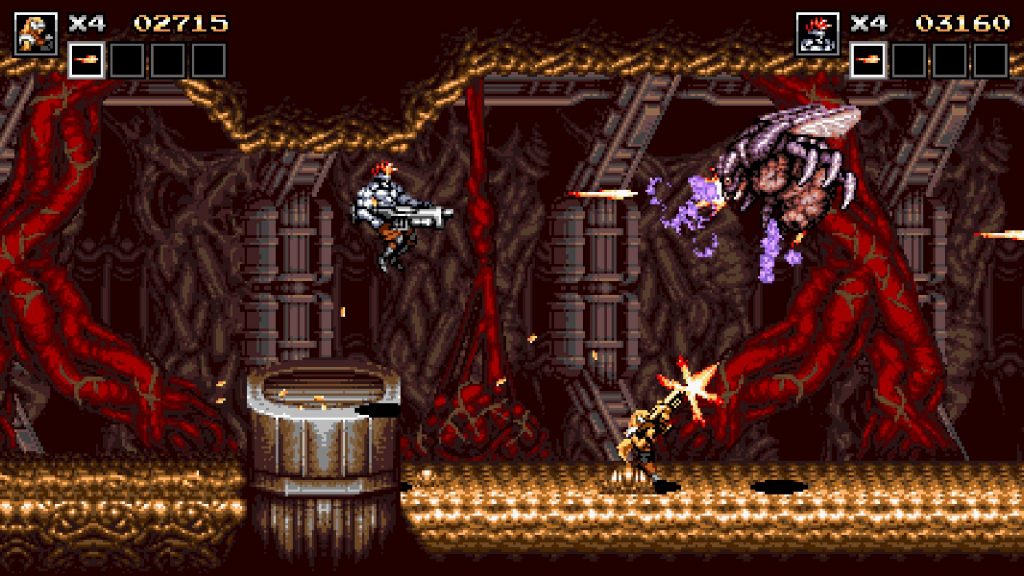 "You’ll start every level with the standard issue machine gun, but there are other weapons and power-ups to collect."

The gameplay is equally throwback: you can move, shoot (pressing the shoot button when an enemy is close to you will make your character perform a melee attack a la Metal Slug), go prone, and roll. You can hold a button to stand still and aim, which comes in handy when you don’t want to manage both moving around and the game’s eight-way aiming system at the same time. There are also vehicles to pilot, from lumbering mechs wielding chainguns to hover bikes that zoom and jump all over the screen. One level even sees you jump into a flying mech suit and go on-rails. It reminded me an awful lot of Star Fox, and I loved every second of it.

You’ll start every level with the standard issue machine gun, but there are other weapons and power-ups to collect. There’s the whip, a pink beam of light that can be swung in all directions and is good if there are a lot of enemies close to you. The grenade launcher sacrifices the machine gun’s range for power, dealing enormous damage to anything unlucky enough to be in the immediate vicinity of one of its projectiles. By far the most impressive, however, is the particle laser. It can shoot small projectiles if you like, but the real damage is done when you charge it. Let it loose after gaining some charge, and it will fire a beam that covers a good chunk of the screen and lasts several seconds, allowing you to sweep it across the screen and murder all but the most powerful enemies in a single shot.

There are also bots to acquire, each of which offers a different advantage. The Attack Bot fires when you fire, increasing your damage output and your ability to control what’s on the screen. The Defense Bot provides a shield, which will absorb two hits before failing, and the Speed Bot boots your movement and firing speed, and gives you a double jump, allowing you to access otherwise inaccessible areas that usually contain things like power-ups or extra lives. You must be careful when selecting a weapon and bot, however. Unless you have the Defense Bot, you die in one hit, and lose whatever you currently have equipped. You can cheat this a bit by switching to your machine gun if you feel like you’re about to die, allowing you to keep your other weapons when you respawn, but bots are gone no matter what. This is classic risk/reward design, and it incentivizes careful play and knowledge of a level. If you’re too reckless, you can lose your power-ups very quickly. 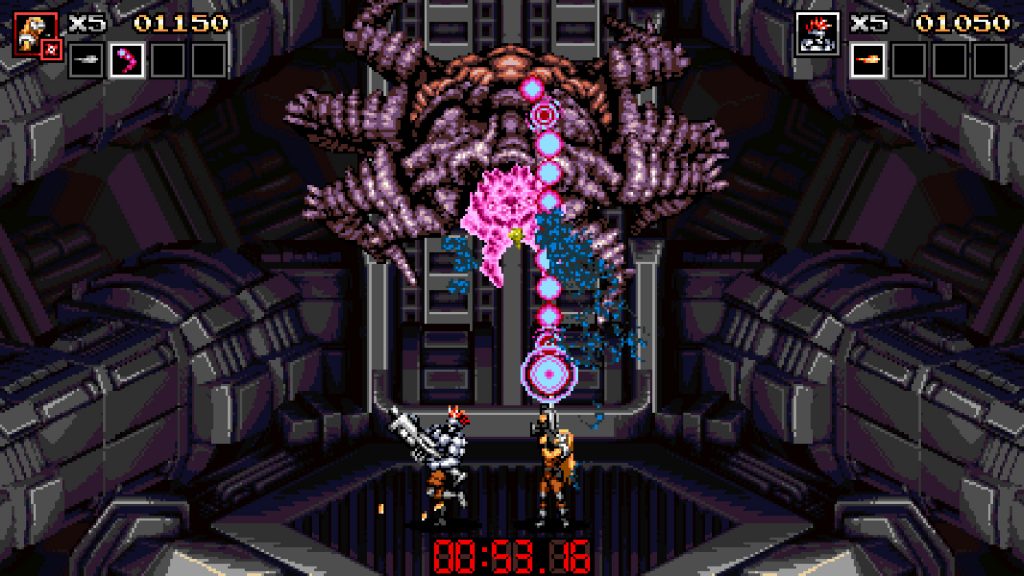 "If you run out of lives, you can use a continue and go back to the lack checkpoint you reached, which will only ever set you back by about one-third of the level."

Blazing Chrome maintains the punishing difficulty that made the Konami Code public knowledge, but it does make concessions to new players. Each level is divided into several sections, usually denoted by a fight with a mini-boss. If you run out of lives, you can use a continue and go back to the lack checkpoint you reached, which will only ever set you back by about one-third of the level. The game also tries to introduce you to new ideas and mechanics in a safe way before bringing them into the game at large. One area, for instance, has you jump your hover bike over several obstacles, and the game lets you practice with a set that’s enemy-free before throwing everything at you.

That said, this is still a game based on Contra, and the fact that you die in a single hit means that it’s still hard, even on easy, which gives you items if you’re having trouble. Still, once you give yourself time to get used to things and learn how things work, the game is a lot of fun, and you’ll find that you improve very quickly. Even if you’re doing poorly, most of the game can be finished if you just stick with it. The only thing that will suffer is your score; the game doesn’t otherwise penalize you for using continues.

Even if you’re having a hard time, Blazing Chrome is probably a game you’ll want to play. It’s utterly gorgeous, even if you don’t use the various filters, and the beautiful sprite work and quality backgrounds make it hard to dislike. Each level is different, and you never quite know what you’re going to get. The game isn’t fond of reusing ideas. It takes them to their natural conclusion and then discards them for the next thing. This is particularly true in the boss fights, which are incredibly varied and universally excellent, especially in the later levels, when the game throws absolutely everything it can think of at you. Throw in a rocking soundtrack and you’ve got everything you need for a run through yesteryear. 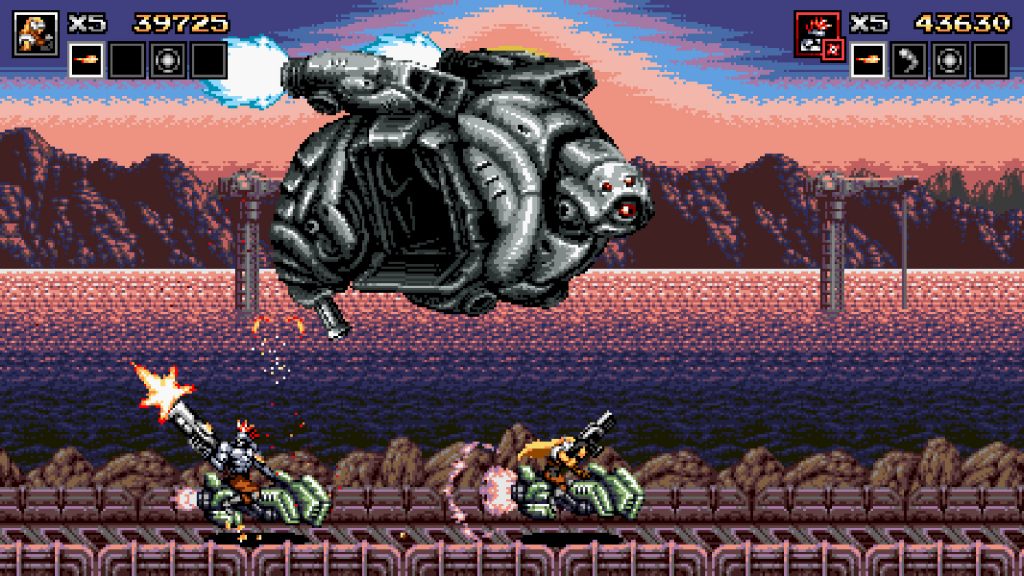 "There are also three difficulties – easy, normal, and hardcore – as well as a mirror mode and a boss rush mode which unlock once you’ve finished the game."

Blazing Chrome isn’t a complicated game. What you see is what you get. Like the games that inspired it, it’s also not particularly long. There are only six levels; the opening four can be played in any order, which then opens the last two, which must be done sequentially. Skilled players should be able to blow through the entire game in about an hour or less, and I have a hard time believing it would take anyone more than 3 or 4 hours to beat, no matter how bad they are. That doesn’t mean that the game is short on content, however. There are two additional characters to unlock, both of whom are melee oriented, and play considerably differently than the standard characters. There are also three difficulties – easy, normal, and hardcore – as well as a mirror mode and a boss rush mode which unlock once you’ve finished the game.

If you want to climb the leaderboards, or just see everything the game has to offer, you could be busy for quite a while, especially if you have a friend to play with. The game supports local co-op, even in the PC release, and it’s the best way to play. Sure, you can have plenty of fun playing by yourself, but co-op is where it’s at for this sort of thing. The co-op mode does introduce some minor issues – there were times either I or my co-op partner were put in impossible positions when we respawned after dying and couldn’t do anything except die, for instance – and there are times where you might accidentally blow something up in a way that leaves them with a weapon of bot they don’t want, but the joy of playing with a friend far outweighs these problems.

If anything, I wish there were more game here, but what is here is excellent and should keep fans of the genre occupied for a while, especially if they want to master it. Blazing Chrome an excellent throwback to the games of yesteryear, and a loving tribute to several series – both in games and in film – that still occupy the public consciousness. Konami and SNK don’t seem to have much interest in making games like this anymore, but that’s their loss. If Blazing Chrome is any indication, Joymasher is more than up to the challenge. Now get out there and kill some robots.

It's still like Contra, so it can be frustrating. Co-op sometimes spawns you in bad places after you die.

Final Verdict:
AMAZING
Blazing Chrome an excellent throwback to the games of yesteryear, and a loving tribute to Contra and Metal Slug that establishes its own identity through beautiful art, fantastic design, and an excellent soundtrack.
A copy of this game was provided by Developer/Publisher/Distributor/PR Agency for review purposes. Click here to know more about our Reviews Policy.