We all had our Warhammer phase back when we were kids but I never quite crossed over into Blood Bowl, Games Workshop’s exreme sports board game. It was thus that I installed Blood Bowl: Legendary Edition on my PC with a sense of excitement, but also trepidation. That was when it occurred to me that Blood Bowl would be a game that I would have to force myself to enjoy, rather than the game doing the work for me. Irritating point number 1: A required internet connection for installation. This was an easily solved issue and Blood Bowl certainly isn’t the only game that requires an online activation prior to installation, but it was these sorts of irritants that sadly marred my time with BB and prevented me from fully enjoying the experience. 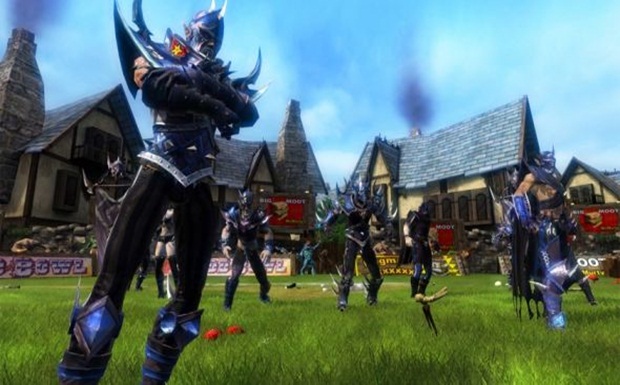 So up pops the main menu, and I mentally prepare myself for some intense and methodical fantasy sports action. Sadly I’m, to all intents and purposes, a Blood Bowl noob. It was thus that I made my way to the tutorial section, where I was rudely molested by irritating point number 2: A very poorly explained game. The tutorial section is just plain awful, and did little to explain to me the complexities of the Blood Bowl rules. Now I’m a reasonably intelligent individual, and yet when I had followed all the steps and instructions in the tutorial I came out without any clue what had happened or why. I decided not to let this bother me and I thought I’d fire up an exhibition game and try my luck. It was here that I tumbled clumsily over irritating point number 3: The clunky user interface. Generally most games of our generation can be easily understood just by getting in there and working it out. Blood Bowl is not one of these games, and my feeble attempts to improvise and work it out on the fly were met with a crushing defeat. Blood Bowl is clearly a complex and deep game at its core, but I honestly feel a better attempt could have been made to improve the interface and make it easier to understand for new players like myself. Take note, if you have never played Blood Bowl before this game is not the place to start.

If you’re a seasoned Blood Bowler however, you may find that the Legendary Edition will offer you a lot of new and exciting content. For a start a whopping eleven new races have been added to the pre-existing nine and the amount of teams has been massively improved. There are also a whole host of new stadiums, skills and bug fixes that deepen and improve the gameplay even further. New game modes are also the order of the day with the new blitz mode that allows for custom rules and real time Blood Bowl action, as well as online leagues and tournaments that are already supported by a thriving community. If you are already well versed in the ways of Blood Bowl then you’re likely to find the Legendary Edition a decent and deep simulator of the board game with a huge amount of content on offer. My only criticism with the core mechanics of the game would be the way the game can get very repetitive very quickly, but this is quite nicely alleviated by the sense of progression and development that you feel as you level up your custom teams. 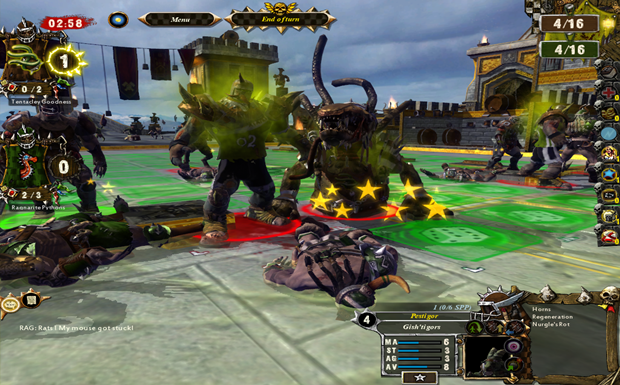 The game does a reasonable of job of keeping up appearances with some solid visuals across the board, even on slightly less endowed computers. I was rather annoyed I couldn’t properly crank up the visuals to match my hardware but at least we know the game will run on a lot of machines, even if the visuals are sacrificed somewhat as a result. It is just a shame that the sound isn’t quite up to scratch. The music does a fine job of setting the scene and pace of the game but the sound effects are weak and not hard hitting enough and the vocal commentaries, whilst varied in their nature, are delivered in a wooden and stilted manner that feels rather amateurish. 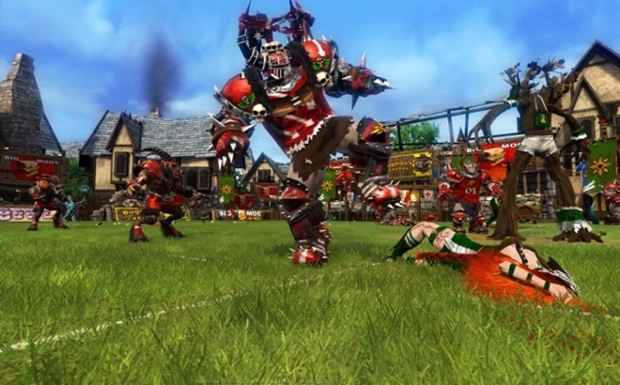 If you’re someone who loves to tinker and tweak with custom content then Blood Bowl will offer a huge amount of bang for your buck. The repetitive nature of the gameplay will put off some players but if you have a creative spark then the in depth creation options for teams, tournaments and internet leagues is bound to keep you satisfied. We also need to take a step back and remember the budget price at which the Blood Bowl: Legendary Edition retails, so now BB fans can enjoy a digital rendition of their favourite board game for less. Blood Bowl is a decent enough title and I was certainly impressed by the deep gameplay mechanics and wealth of content on the disc, but with such poorly explained mechanics and a weak interface it is hard to recommend it to all but the most hardcore fans of Blood Bowl.

Huge variety of modes, Thriving online community, Solid visuals, Deep gameplay mechanics, You get the sense of your team progressing

Final Verdict:
FAIR
Bringing the Games Workshop extreme sports board game to life, Blood Bowl: Legendary Edition adds new races, skills and bug fixes that improve upon the original. Sadly, a clunky interface and poorly explained tutorials make the game rather inaccessible
A copy of this game was provided by Developer/Publisher/Distributor/PR Agency for review purposes. Click here to know more about our Reviews Policy.