Vampires are so five years ago.

Blood Knights tells the tale of a mediocre vampire hunter and his mediocre excuse to slaughter vampires, in the mediocre trend of the past few years that is everything vampire. But on a more serious note this is what Blood Knights is all about. Jeremy is a vampire hunter who serves a weird order, I think. The stereotypical nature of a mid century vampire hunter who battles the undead under the service of the order, is so littered in popular culture through the use of terrible books and knock-off films that it should be cast as a crime from this moment onwards.

Spiritually bound to the creature he hates the most, Jeremy must work with the vampire Alysa in the hopes of driving the rest of her kind to extinction. When Jeremy is turned into the one thing he despises and abandoned by the cult he once fought for, the sad and absurd excuse for playing this game kicks into gear. Destroy the supernatural and battle your former allies. Now this is where things get interesting. One thing that was never fully understood to me and this was partly down to the game’s poor story driven methods for explaining things, was the reason why Alysa has chosen to continue helping Jeremy with his quest. She’s bound to Jeremy but no longer in a hostage situation under the order. Why didn’t she just say No and skip to the end of the game? 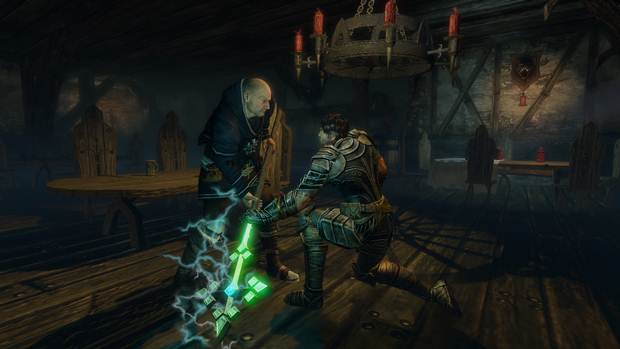 "Frequent slow downs, light stuttering and shadows continuously popping and flickering couldn't be worse if it was an intentional design."

Getting the worst out the way characters are flat and contain emotional hiccups. Jeremy is dull, Alysa is bland, and the player to character attachment that most games attempt to deliver isn’t in this game. Character development was clearly not a focus during the game’s development stages, and this was reflected in my tendency to recap the character’s names…it’s Jeremy right?

There’s nothing more irritating than the combination of flat characters and stiff animations, and that’s where Blood Knights succeeds in being the Undead. Characters look confused and give the appearance of holding no hope in their mission, they look robotic.

This is rounded off by an unhealthy dose of bad voice acting glitchy visuals. Frequent slow downs, light stuttering and shadows continuously popping and flickering couldn’t be worse if it was an intentional design. The only visual element that remained consistent was Jeremy’s strange battle skipping where most warriors would charge or run. I wasn’t sure if he was extremely happy to fight or just needed to visit the bathroom.

The game is played in a top down view, in which you control both its main characters through a switchable method of toggling back and fourth. Playing in co-op which is how the game was meant to be played, the second player controls Alysa and is used more as an assistant rather than an impactful character who’s actually taken notice of. 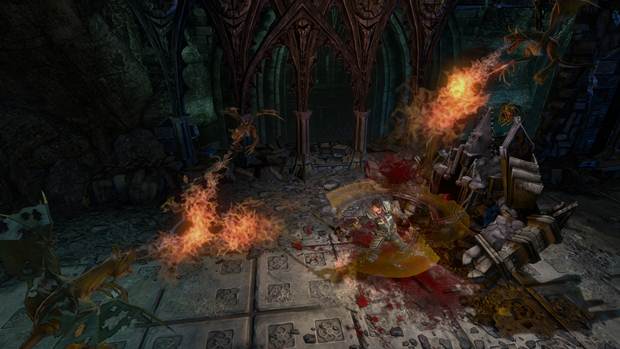 "Playing as Jeremy your control options are split between five buttons, attack with your swords, attack heavier with your swords, use your special attacks with your swords, jump, or spin like a madman. Why the studio chose to implement a Crash Bandicoot throwback into the game's control scheme is beyond me and it looks ridiculous."

Traversing through linear caves and dark island ruins the game provides no options for exploration nor interest in its world environments. You break barrels, smash boxes and engage in combat, that’s about the extent of the game minus its dull and skipped over storyline. The gameplay is about as mediocre as the story that gives it reason and the sense of progression is either bar-none or hidden by its boredom.

The game doesn’t do much to keep the player interested in any of its assets, and this goes right down to its control scheme. Playing the game solo which is something I do not recommend nor how the game was designed to be played anyway. Which is both obvious in its control method aswell as the on-screen prompts, going in solo can be a nightmare. Playing as Jeremy your control options are split between five buttons, attack with your swords, attack heavier with your swords, use your special attacks with your swords, jump, or spin like a madman. Why the studio chose to implement a Crash Bandicoot throwback into the game’s control scheme is beyond me and it looks ridiculous.

Now there’s nothing occasionally wrong with minimalistic attack options, but Blood Knights takes it to a whole new level to the extend that it bores you. The game gives you an upgrade system to increase your attacks and defense and such. But this is just flat-out typical for a game of this type at this point, and it fails to execute anything worthy of a RPG implementation. Blood Knights doesn’t do enough if anything to make you notice any difference from applying the upgrades. The attacks fail to deliver in both combos, techniques, or any kind of tactical advantage when actually engaging an enemy.

It’s a bad deliverance of the Hack ‘N’ Slash genre, and it bores you quickly due to the non existent variety of attacks the character can deliver. When playing solo you would expect a game of this sort to take control of your secondary character. Not here I’m afraid and in some ways this may actually be a good thing as I sense a computer controlled A.I. partner in this game would have done more harm than good, based on my experience battling the game’s enemies. 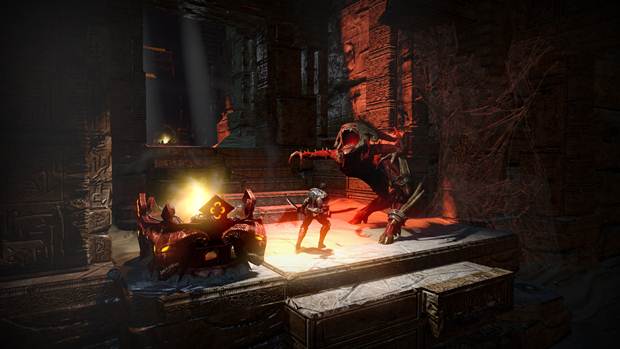 "Both characters are pain to use and an even bigger pain to watch in action. Battling with opposing vampires, werewolves, and other supernatural miscreants, the combat feedback is a disaster."

Instead the player is forced to switch between the two characters, both occupying the same health bar rather than a discrete one which is present within the two-player mode of the game. Taking control of Alysa presents a larger problem to the player and I found myself only actually changing to her when required by the game, or by a slip of the buttons. Alyssa has four attacks, fire your wonky guns in the hope they reach the target, trigger a special attack again using your guns, use an environmental move that’s also effective against your enemies, and jump.

That’s all and since each of the actual attacking moves don’t give any real form of distinction between them, despite the upgrade system paving the way for an illusionary form of a battle advantage. Both characters are pain to use and an even bigger pain to watch in action. Battling with opposing vampires, werewolves, and other supernatural miscreants, the combat feedback is a disaster.

There’s no real awareness coming from your enemy that they’re under attack besides the floating numbers above their heads and an obstructing health bar. If they want to attack they’ll do so and given that all enemies engage you in large groups you rarely get to fully dive into the action, and unleash your fury. Instead you are left with frustration and everything feels back and fourth up until the short moment in which you die. As I mentioned before Blood Knights is best played in co-op mode, and I use the phrase “Best played” very lightly.

Playing in co-op only does justice for player one as the chore of controlling the terrible Alysa is shifted to the second player. While this frustration is no longer in your burden and you regain your own health bar, player two is now in pain as the lacking options to attack with will eventually cause the player to quit the game. It’s a circle of grief regardless of how you choose to tackle the game and it feels like a punishment.

It's an amusing experience to point out the game's faults especially when doing so in co-op.

No real advancement in the control scheme is the game's biggest problem.

Had Blood Knight actually been enjoyable it would be perfect for a Friday night session of all night gaming with a friend. But its frustrating features lead to failure.

A copy of this game was provided by developer/publisher for review purposes. Click here to know more about our Reviews Policy.
Tagged With: Blood Knights, Kalypso Media, Mac, pc, ps3, xbox 360