Death and danger lurk around every corner of Yharnam.

Bloodborne is a spiritual successor to the Souls series, a franchise that is well known for its punishing mechanics, high risk and reward gameplay, sense of adventure and exploration in dark fantasy settings. Bloodborne is no different in that regard and carries on that same legacy, but with better visual fidelity thanks to to current gen hardware capabilities. So, how is Bloodborne differ from the Souls series in terms of theme and gameplay features, and most importantly what makes it such an epic adventure?

Welcome to Yharnam, the cursed city in which Bloodborne is set in. Yharnam is heavily influenced by the Victorian England era and Dark Gothic fairy tales with a strong vibe of horror elements and dangerous beasts. You play as a Hunter whose job is to hunt the vile beasts and to find out the cause of the curse in Yharnam. It’s a simple story that is full of mystery and dark secrets that fits the game’s theme which by the way is portrayed extremely well from the beginning to the end thanks to its art design and lighting engine. 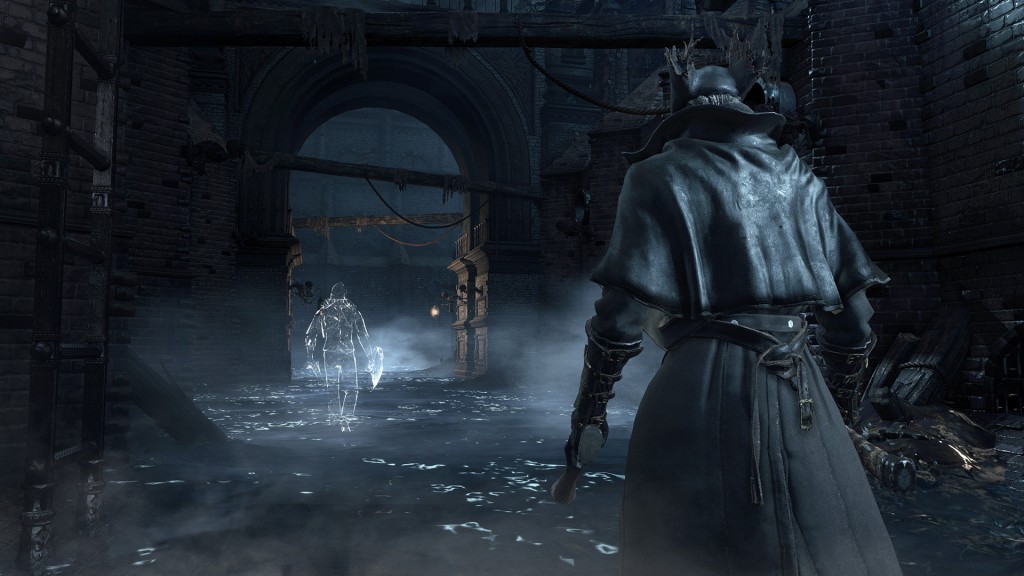 "The most impressive thing about Bloodborne's presentation is how everything in the entire game is interconnected and can be accessed through hidden pathways and shortcuts that you can find throughout your journey.

During your dark journey you will be going through gothic streets, cemeteries and haunted environments that are full of danger and dark secrets. The most impressive thing about Bloodborne’s presentation is how everything in the entire game is interconnected and can be accessed through hidden pathways and shortcuts that you can find throughout your journey. Best example of this would be the original Dark Souls, wherein it was interconnected and you were able to access shortcuts once you find them. That’s how Bloodborne is, however the game also does it on a much bigger scale and because of that it’s even more impressive due to the fact how dense this game is when it comes to content.

Everything is placed in the game for a reason and there is always something interesting to find. For example, you can end up venturing to an area you are not even ready for and find out the hard  way that you’re not supposed to be there. While this may sound like a design flaw, it’s actually the complete opposite of that and this is what the Souls franchise is known for and Bloodborne does it better than ever. Bloodborne has a phenomenal sense of exploration, managing to keep you excited, horrified and curious, all at the same time.

As expected, the game is filled with dangerous beasts, humanoids and many different kinds of creatures that may surprise you. Either way, the enemy designs are beautifully implemented and they are always intimidating in some shape or form. The sound and audio in Bloodborne are top-notch. The game features a fantastic soundtrack along with ambient sounds and monster groans, and everything else that you can imagine in a dark fantasy setting. 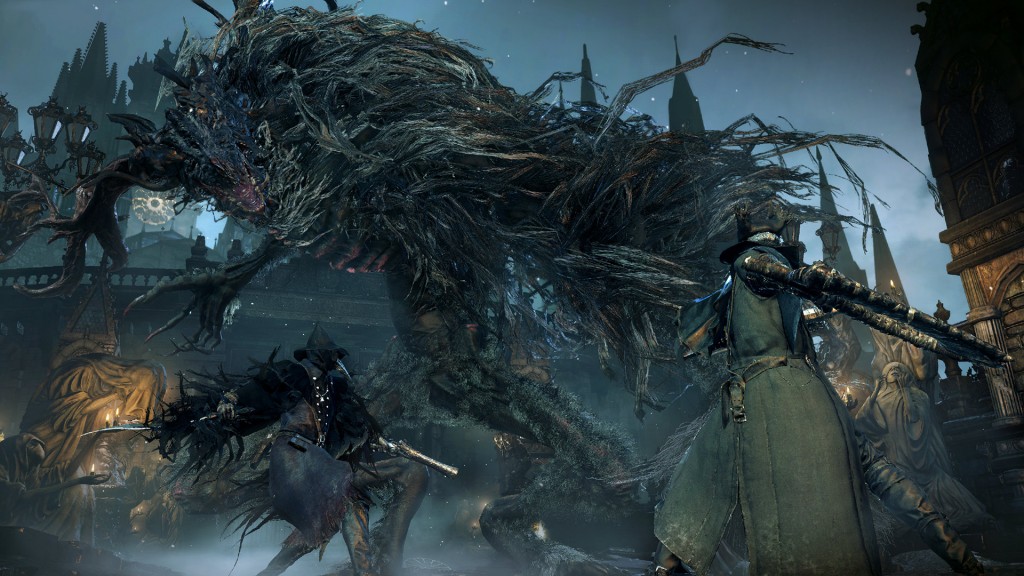 "If you've played previous Souls games then you kind of know what to expect when it comes to combat and gameplay. However, if you're used to the slower paced combat of Demon Souls or Dark Souls, then you might be in for quite a surprise.

If you’ve played previous Souls games then you kind of know what to expect when it comes to combat and gameplay. However, if you’re used to the slower paced combat of Demon Souls or Dark Souls, then you might be in for quite a surprise.

The combat in Bloodborne is a lot more fast paced and more intensive due to the new weapon system including the trick weapons. For example, the Kirkhammer is able to transform itself from a big blunt hard-hitting hammer to a single handed fast hitting sword. Basically, trick weapons are 2 weapons in 1 and you have quite a variety to choose from. At the start of the game you’re only a given a choice of 3 unique trick weapons, while the rest of them you have to find on your own as you play the game and discover its dark hidden secrets.

Bloodborne also introduces pistols, blunderbuss and other sorts of long range weaponry. The player can also carry two weapons at a time. For example, you may have a single handed weapon in your right hand and a pistol or a blunderbuss in your left.

As you progress throughout the game, you will also be able to upgrade your weapons with materials that you will find in the game’s world. Bloodborne also adds extra customization with a two types of collectibles called Blood Gems and Runes. Blood Gems are special gems that can be put into your weapons. The Blood Gems can increase different attributes of the weapons. The attributes can range from poison attacks, stat scaling, regular damage buffs and more. The system is very simple, but yet satisfying and makes the crafting and combat gameplay deeper and a lot more intriguing than the previous Souls games. 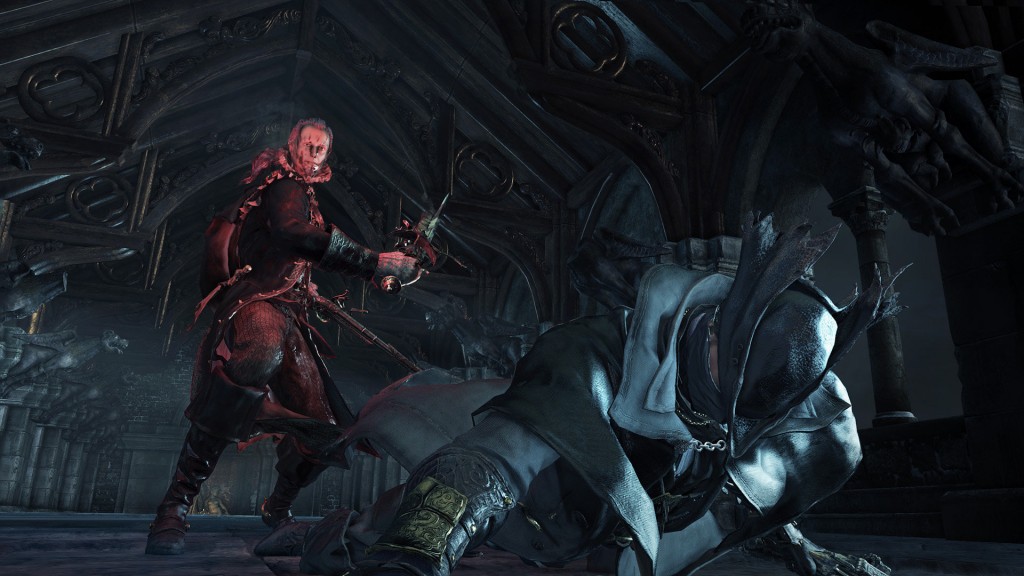 "PvP works pretty much same way as it did in Dark Souls, where you use a specific item to invade other players' world. Although, there is one new interesting mechanic that From Software have added to the invasion and that is related to the Sinister Bell Woman NPC.

Runes on the other hand are self-buffs that you can put in for yourself that give you benefits. One of the Rune’s I’ve used was called a Clockwise Metamorphsis, which increased my Health Points by +5%. You may equip upto 3 Runes at a time. This system adds another layer of customization to combat play and awareness. It goes without saying that if the players wants to get through a specific boss or a certain area of monsters then they will have to take advantage of the Blood Gem and Rune Systems to get out alive and survive the horror of Yharnam.

It wouldn’t be a true successor to the Souls series unless the game has multiplayer invasions and co-op summons that we all know and love from the previous entries. The multiplayer in Bloodborne works quite similarly, although, there are quite a few changes. In order to summon a friend or a random person in the world you need an item called Beckoning Bell which you get very early on in the game. Once you have time item you can use it to call upon others to help you. The players who are willing to help need to use an item called Small Resonant Bell to go into someone’s world and react to the Beckoning Bell.

But how do I make sure that a random stranger does not intervene my gameplay session? Thankfully, From Software was smart enough to develop a password system that both players can input in their Network setting so that only they can get connected together and play.  This make’s summoning a lot easier than it did in previous games, because now you don’t have to worry about a random person joining your game and wasting your precious time. "The PlayStation 4 desperately needed a killer exclusive, especially after the mixed reactions towards DriveClub and The Order 1886. With Bloodborne they finally have it.

PvP works pretty much same way as it did in Dark Souls, where you use a specific item to invade other players’ world. Although, there is one new interesting mechanic that From Software have added to the invasion and that is related to the Sinister Bell Woman NPC. This NPC is an enemy that is trying to kill you by calling in Invaders from other worlds. If you can find this NPC in the level and kill her, then you will prevent an invasion until you die. It’s an interesting addition that gives a fair chance to the person who is being invaded. In the previous games, the invaders always had an upper hand and now it’s even. Secondly, players can also share their created dungeons between friends and complete them in co-op if they wish. This adds another layer of replayability and multiplayer functionality that no previous Souls games had.

For the most part, Bloodborne doesn’t really have any major issues other than occasional small pop in and very few framerate dips as the game manages to keep a steady 30fps. However, my biggest gripe with the game are the loading times. It takes about 30-40 seconds to go from a loading screen to the game. Although, the loading screen only happens once to load the entire game’s world unless you’re using the checkpoints to teleport between different parts of the world. Also, everytime you die it can become quite annoying to get killed by the same thing that is near a checkpoint and wait every 30 second to get another attempt. Loading times will be patched in the future but right now they are major annoyance.

The PlayStation 4 desperately needed a killer exclusive, especially after the mixed reactions towards DriveClub and The Order 1886. With Bloodborne they finally have it. From Software manages to deliver an epic experience like no other. If you love an intriguing atmosphere, long and strategic boss battles, sense of dark journey, in-depth exploration, intimidating enemies and fun co-op and invasion experiences, Bloodborne won’t disappoint you. It’s by far one of the best reasons to own a PlayStation 4 yet.

Final Verdict:
EDITOR’S CHOICE
Bloodborne will keep you addicted for weeks if not months. Sony finally have a winner for the PlayStation 4.
A copy of this game was provided by Developer/Publisher/Distributor/PR Agency for review purposes. Click here to know more about our Reviews Policy.