Serpent’s Curse provides a few solid hours of great gameplay and is good fun while it lasts.

Much has changed in the video games industry in the two decades since the original Broken Sword made its debut and it’s a sad fact that point-and-click adventures are few and far between these days. Fortunately, Broken Sword 5: the Serpent’s Curse is a good old fashioned affair and revives the genre admirably.

The latest addition to the series is a fairly slow-paced game where players scour every inch of the screen for clues to solve puzzles, encounter colourful characters and choose appropriate responses from a simple dialogue wheel.
The result is a charming world, an entertaining story and enough intrigue to keep you playing. The Serpent’s Curse is certainly a great nod to a now neglected game type – and it’s well-written, nicely voice acted and pretty decent to look at too.

This time round our heroes George Stobbart and Nico Collard are dropped in the middle of a murder mystery after a hold up at an exclusive art gallery in Paris, and it’s up to our intrepid couple to find the culprit. The theft of an obscure and mysterious painting, La Malediccio, and subsequent murder of the gallery owner not only leaves a cadaver on the floor but a lot of unanswered questions. 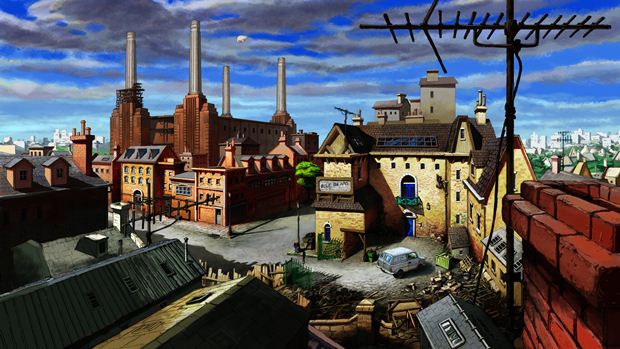 "The control scheme translates nicely to console, the left stick manipulating the ever-present cursor and a couple of buttons selecting where to move to, what objects to pick up and how to use them."

Cue George and Nico to jump in to the fray, solving countless puzzles and visiting various exotic locations to unravel the secrets of the painting in good old point-and-click fashion. The first half of the game progresses at a slightly slow pace, introducing you to the simple control scheme, some of the key characters and setting the scene for what is a very entertaining tale. Fortunately, the pace picks up a little when you leave the Parisian streets and cross paths with a certain Russian oligarch in London.

It’s all strangely absorbing, thanks to the decent plot, the enthusiastic voice acting and the many and varied environments. The art style and beautifully hand-drawn 2D screens are fantastic to look at – helping to pull you in. And just like the environments, the cel-shaded characters themselves are full of colour too – each laden with wit, attitude and often an intriguing backstory.

The control scheme translates nicely to console, the left stick manipulating the ever-present cursor and a couple of buttons selecting where to move to, what objects to pick up and how to use them.

Before long you’ll realise that most of the puzzles are fairly similar and few prove too taxing. Often they require a quick scan around the screen with the cursor to highlight items of interest, which are then either examined or dropped into your inventory. How to employ many of the items tends to be glaringly obvious – although occasionally, a curveball can be thrown in to stump you. 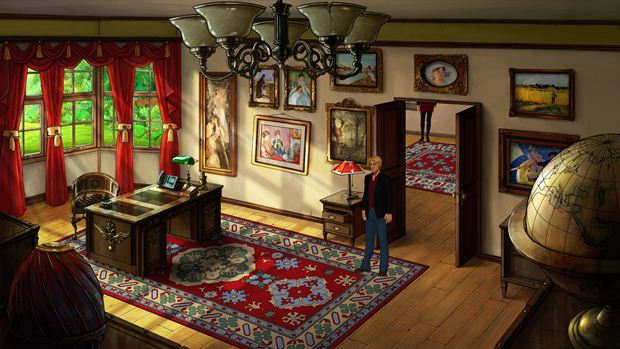 "Nevertheless, the Serpent’s Curse provides a few solid hours of great gameplay and is good fun while it lasts. There’s really no strategy required or quickness of reaction – all you need is a bit of common sense."

Interaction with the many people you come across plays out in much the same way too. Most are a grumpy, obstructive bunch initially – barely anyone willing to help you or answer questions unless you first help them overcome a problem, give them something or rub their ego.

It’s typically a case of introducing yourself, being rebuffed and then selecting various retorts from your dialogue tree. Often the relevant – and most appropriate – line of questioning/discussion topic will appear obvious, but chats with bystanders sometimes tend to descend into simply working your way through each option until they provide the required response and unlock the next phase of the story.

It is a bit of a shame you can’t really make a mistake and say the wrong thing to offend a suspect, or miss clues and head down a dead end. The game is very linear, with each puzzle having to be solved in order before progressing.
If you do struggle at any point, a handy hint system can be accessed through the menu screen – providing a series of tips to nudge you in the right direction. While this is very welcome, it can be all too tempting to cheat your way past a problem, removing much of the challenge.

Nevertheless, the Serpent’s Curse provides a few solid hours of great gameplay and is good fun while it lasts. There’s really no strategy required or quickness of reaction – all you need is a bit of common sense.

Still, you’ve got to give it to Kickstarter and crowdfunding; without this phenomenon, so many great video games would have fallen by the wayside. Fortunately for both fans of Broken Sword and those new to the long-running series, the latest episode won’t leave you disappointed.

A welcome return for George and Nico. Lovely to look at with some fantastic environments and characters. Story and puzzles occasionally predictable but keep you intrigued.

Slow-paced gameplay could deter some gamers and there’s little that’s truly challenging. There’s a lot of dialogue to listen to as well.

A cracking Broken Sword caper brought to life thanks to Kickstarter.

A copy of this game was provided by developer/publisher for review purposes. Click here to know more about our Reviews Policy.
Tagged With: Broken Sword 5: The Serpent’s Curse, pc, revolution software