Bulletstorm: An Exclusive Interview With Adrian Chmielarz Creative Director of People Can Fly

Bulletstorm is an upcoming 2011 first-person shooter video game developed by People Can Fly and Epic Games, and is published by Electronic Arts for the PlayStation 3, Xbox 360 and Microsoft Windows.We recently got a chance to sit with Adrian Chmielarz who is the Creative Director of People Can Fly. We talked about their upcoming shooter and how different it will be from the rest of the competition. Check out the full interview below. 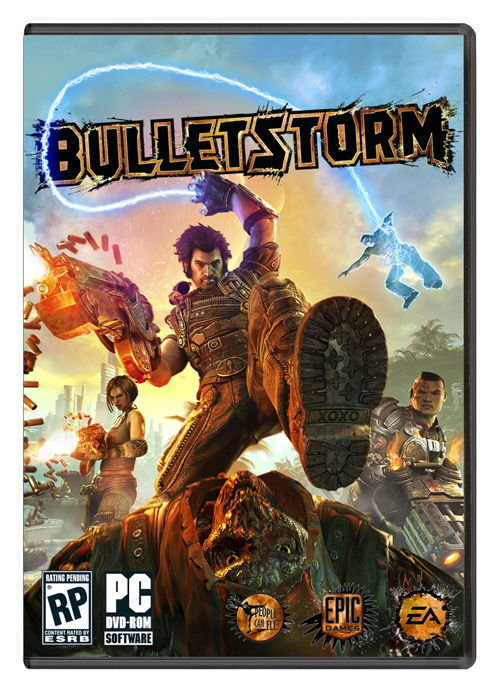 GB: Epic Games is a very prestigious developer, and titles like Gears of War have recently come out of its banner. We have no doubts Bulletstorm will be great, but do you never feel pressurized knowing that you have so much to live up to?

Adrian: This is exactly what gets us going. We’re a part of Epic Games, with the emphasis on “Epic”. Everyone expects big things with this word attached. The team at People Can Fly are a very ambitious bunch, and this is what we always wanted.

Obviously the pressure is extreme and coming from all kinds of places, including the Epic Games mother ship itself. And that’s great. Kicking a developer’s ass is the only way to make a game worth people’s money and time.

GB: Bulletstorm looks like a very different game, from what we have seen till now, set apart from other games in the First Person Shooter genre, something that is very uncommon these days. What keeps you guys fresh? What keeps the flow of thoughts and innovations coming?

Adrian: The fact that Bulletstorm is different is a side effect. It was not our goal. We did not look at other games and go: “Okay, they do this, so let’s not do that and do something else”. We just knew what we wanted to do, what are our strengths and weaknesses, and just decided to make a game that will best fit the studio’s mentality.

But when it turned out that we were different, I’d be lying if I said that didn’t make me happy. It’s proof that First Person Shooters can still evolve, can still offer fresh things and surprises to people who appreciate this side of gaming. I think we managed to find a good middle ground, when you can still play Bulletstorm as you play a traditional shooter, but you can also dive into a new layer that no other shooter offers.

GB: The theme of Bulletstorm seems to be centred around exaggeration- over-the-top moves and huge weapons. It seems pretty original- maybe that is why we have a very vague idea how you’ll implement it properly and in a relevant way. Could you please explain?

Adrian: The source of all this is the hero, Grayson Hunt. How do you make an engaging and challenging game with a hero that is a bad ass mofo from the start? Usually, there’s this clear progression: you have amnesia, wake up in prison, and your first weapon is a knife – and then it’s the pistol, the machine gun, etc. But how do you make a game in which you start with a nuke? Not that you start Bulletstorm with the nuke, but I’m sure you get the point.

We knew we wanted Grayson to be a character empowered with awesome combat skills and abilities from the start, and the challenge was to feature a progress of that character. That’s how the “over-the-topness” of Bulletstorm was born. While most games take you from zero to hero, we take you from hero to destroyer of worlds. 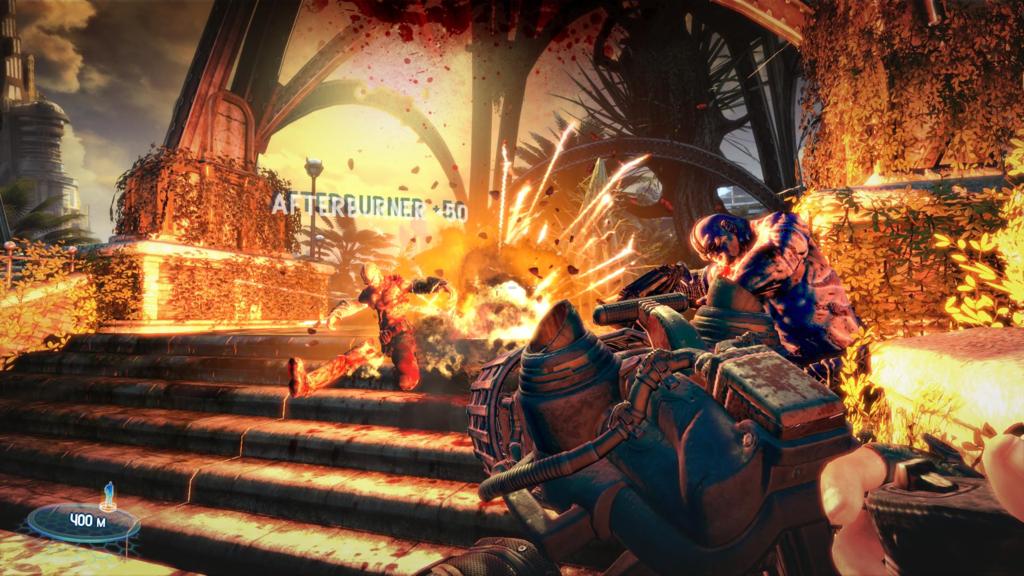 GB: What exactly are these moves and weapons? Could you give us a few examples and tell us how they work?

Imagine a good old explosive red barrel and one enemy you fight against. Here are the different things you can do with just the kick and the barrel:

Note: we’re not even using slide, Leash, any weapon, or any other object at this point. Now if you actually add these into the mix, the amount of possible combinations is so high that …we no longer have any control over it. This is really all up to you, the player.

GB: The “skillshot” mechanic seems like a very original idea- could you please explain what it is in depth for our readers? We would love to find out more about such a fun system.

Adrian: If you just kill an enemy, “pew pew pew” in the chest, you get +10 of the so called Skillpoints. It’s not zero, because, well, after all you did kill him. However, if you kill the enemy in a cool, spectacular, challenging way, you get more points – depending on the difficulty of such kill – and such action, a Skillshot, has a name. Basic example would be killing a guy with a headshot: you get +25 Skillpoints and a “HEADSHOT” Skillshot call out. It’s worth more points than a regular kill, because it’s harder to aim at the head than it is to aim at the chest.

So that’s layer zero. Cool kills are Skillshots and you get more points than from regular kills.

Then there’s another layer; stacking the Skillshots. For example, we have a Skillshot named AFTERBURNER that’s rewarded for killing an enemy who is on fire. But what happens if you kill this guy that’s on fire with the shot to the head? Then you will get both the HEADSHOT and AFTERBURNER Skillshots.

Another layer is when players discover new Skillshots – we have way over 100 of them – they are worth five times more than their normal points value. So the first time you execute the Headshot Skillshot, you get 125 Skillpoints (5×25). This way we encourage players to keep discovering and executing new Skillshots instead of sticking to just one kind of kill.

There’s more to the Skillshots but I hope this description gives you a good idea of the world of opportunities we’ve opened to players.

GB: The aforementioned skillshot system seems to have an RPG-touch to it- what with players receiving points if they are successful and having the ability to upgrade their system. Do you think this will add depth to the entire experience in a meaningful way?

Adrian: I know it does, we wouldn’t have done it otherwise. As much as executing Skillshots and getting Skillpoints is fun in itself, there needs to be a real point to it all – and that point is getting access to great upgrades and unlocks.

Every few hundred meters you will find something we call a Dropkit. When you connect to it with your Leash, you can check stats, access the Skillshot Database (and most importantly), buy ammo, unlocks and upgrades. It’s your choice how you want to spend your hard earned points and it’s not an easy one; we tried to make sure that everything you buy is worth it, but obviously you never have enough points to buy it all at once.

GB: Do you have any ideas for multiplayer or online? Maybe a co-op mode could do well, with each player taking control of either of the two main characters?

Adrian: We have unveiled Anarchy mode, a mode for up to four players to enjoy a co-op experience. In that mode, you play as a soldier who wants to become an elite Final Echo commando. Final Echo is the replacement for the Dead Echo team that went rogue after its leader, Grayson Hunt (the hero of the game) discovered it’s been used for political murder and other atrocities.

In order to prove your worth and become a Final Echo commando, you need to fight waves of enemies and survive till the end. That part is something people know and love from games like Gears of War (Horde mode). However, we have added a twist. While normal horde gameplay resolves around survival, in our case, it’s also about proving you can kick ass. You can only progress to another wave if you get a certain minimum score. In other words, just killing enemies is not enough. You have to keep on executing Skillshots and Team Skillshots and make sure you’re getting the most out of the system, e.g. by squeezing more than one Skillshot out of a single enemy.

GB: It seems the basis/goal of the game the specific way you kill an enemy to unlock certain things. Is that correct?

Adrian: That’s just one of the layers. The point of the Single Player Campaign is to have a great rollercoaster ride adventure, in which the gameplay mechanics are just one side of the coin. The point of Echoes mode is to score better than your friends. The point of Anarchy is to pass all the waves and become Final Echo. But it’s all surrounded by that core combat loop, which is killing enemies in creative ways and being rewarded for doing so with cool stuff.

GB: Do you consider Epic Games to be a big influence when it comes to the games development?

Adrian: Yes, from all possible directions. Gears of War was an inspiring revelation to me long before we even had an idea that one day we might become a part of Epic. After that happened, we just learned a lot from the guys in North Carolina, they are obsessive about quality and are an amazing group of some of the most professional and talented people in this industry. They are very successful for a reason.

GB: Is there anything else you want to tell us about Bulletstorm?

Adrian: I think people will be very surprised with how incredibly addictive Bulletstorm’s Echoes mode is in the game. In short, we took the juiciest, combat-oriented, 2-5 minutes long sections from the game, stripped them off any dialogue and cinematics and present these to the players to fight in for the high score possible.

Simple idea, right? And maybe that’s what’s beautiful about it. What convinced me that it works is that the whole PCF team became addicted to this mode. We actually had to officially forbid people to play Echoes mode during work hours because our productivity suffered heavily. So here’s hoping that if we like it, players will like it too. We write more about it on our blog, which you can find here:  http://www.peoplecanfly.com/blog/

We thank the team at People Can Fly and specially to Adrian Chmielarz for giving us their valuable time.

Note: Kudos to our Editors, Shubankar and Jim for preparing the interview questions.