Bulletstorm: The Revolution of the First Person Shooter Genre?

After playing the Bulletstorm demo on the Playstation Network I personally wasn’t absolutely in love with it, although it does show some very high potential. There are definitely no complaints about the voice acting and visuals but I’d really like to get in depth on exactly what you can expect to see, play, and experience in Bulletstorm.  Along with semi innovative weapons and game play there is also is a bit of depth in the story.

Bulletstorm takes place in the future on a planet that appears to be over run with all different types of enemies. You play as one Grayson Hunt an elite mercenary in a squad most commonly referred to as Dead Echo. When you and your “co-mercenary” Ishi Sato reveal that they have been working for the wrong side the two of you essentially switch teams and are exiled to the far edges of the galaxy.

As far as game play mechanics go, it was running very smoothly and there is a twist on how to earn big points. Skill shots are what you want for earning big points; these can be racked up with many combinations of mele and weapons attacks. More or less, the player is rewarded for the more unnatural styles in which they wreak havoc. More importantly than the large collection of large scale guns, there are innovative features that you can have a bit of fun with.

The energy leash and yes it’s about as cool as it sounds, is a whip like energy weapon that Grayson uses to solve obstacles, toss and pull enemies, and most importantly make him a dominant force. Using the energy leash will automatically throw the game into a lack luster and over used bullet time effect, but none the less gets the job done and creates those big combos we were talking about. One more very cool thing I couldn’t get enough of whilst playing was using the energy leash to pull an enemy at me and when he gets close enough front kick him away while shooting up his entire body.  Many laughs were had, but it never really changed much so it can be assumed it will definitely wear off after a few hundred punts.

There is also a slam attack that can be utilized with the energy leash.  Basically Grayson will lift you up and bring you down just in time for a giant explosion of energy that suspends said enemy in the air for around 10 seconds. This is great for getting those desired skill shots. Over all I’d have to say that the energy leash is super fun to play around with and I think you’ll get your kicks with it, if you know what I mean. 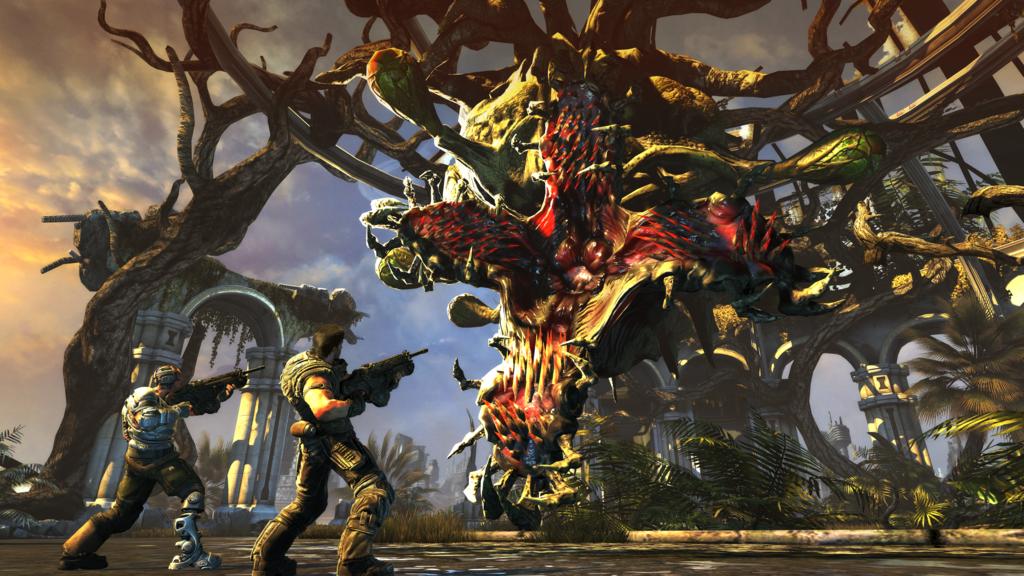 What can we really expect from the Bulletstorm story?  Will it have replay value? These are pretty valid questions for any game that releases these days. From what has been speculated we can be expecting a very detailed and depth filled single player, with plenty of twists and action scenes. It has been noted that it is linear and has multiple paths although nothing really beats true omni directional free roaming worlds.

There is a leveling system that is based around the points you earn with the skill shots. You will be able to upgrade your character and unlock all kinds of weapons to make yourself the most lethal mercenary around. You can max out your character, which means that he is no longer able to get stronger and it is said that when you reach this level you will gain more skill shots with one shot kills.

Bulletstorm online has co-op for those of you who like to work together, which is called “Anarchy Mode. It also features competitive game modes for your online gaming needs. There other gaming mode announced is “Echo” where they remove all the story from some of the more action packed single player moments and have leader boards for global and friends to see who can rack up the most points at the end of the mission. This way you can focus mainly on killing without having to worry about the story distracting you.

There are expected to be a whole bunch of trophies out and players are rewarded for all types of malicious behavior in game. In fact the controversies are all ready running high at Fox News, giving Bulletstorm a hard time for its violence, sexual content, and foul language. Yes there will be violence, and foul language, but how else are you supposed to be realistically emerged into a completely fictitious and fantasy world if the characters don’t sell it to you properly.

Speaking on presentation alone, Bulletstorm looks and feels huge. The graphics are seriously mind blowing and you get a real sense that you’re in some future paradise. The audio is wonderful, and the voice over work is spot on. Its important to me to feel like I’m really in the action and voice acting can make or break a single player game. Fortunately for Bulletstorm, voice actor Steve Blum did a great job.

Over all Bulletstorm looks and feels pretty good, and I think that if you’re a fan of other types of futuristic shooters that involve great stories and crazy game play than this will fit snuggly into your collection. You can expect high intensity shootouts, overkills, all kinds of achievements, multiplayer co-op and versus, and all types of other features to keep the title pretty fresh. Give the demo a shot, and if it seems like the right thing to do, it probably is.