Sledgehammer’s take on the vaunted Call of Duty franchise goes under the microscope.

Call of Duty: Advanced Warfare may have been borne into a franchise that is scrutinized the year round – and almost seems destined to stick to a particular gameplay style, regardless of the fresh new elements in this year’s iteration – but it has made a very significant graphical leap from its predecessors.

Unlike Call of Duty: Ghosts in 2013, Activision divided development duties between two studios with Sledgehammer Games handling development on the Xbox One, PC and PS4 as High Moon Studios handled Xbox 360 and PS3 development. This approach of assigning dedicated studios to development worked wonders for Titanfall – we’ll see how that approach pans out for Call of Duty: Advanced Warfare.

In the meantime, it’s amazing to note just how much progress has been made. Facial details and animation feel much smoother than Ghosts with FXAA instead of a custom post-process anti-aliasing. Though there isn’t too much of a difference in terms of features, Call of Duty: Advanced Warfare manages to get far more out of the current generation platforms than Ghosts.

Comparison between the PS4, Xbox One and PC versions of Call of Duty Advanced Warfare.

Both the PS4 and Xbox One versions of the game run at 1920×1080 resolution and 60 frames per second. The difference in the resolution arises during gameplay – the PS4 version keeps a native 1080p resolution consistently. However, the Xbox One version has a dynamic resolution which shifts from 1080p to lower at times. It’s not a major hindrance in the campaign mode (though reports have indicated that the gameplay is predominantly on a lower resolution in multiplayer).

Screen space ambient occlusion (SSAO) and fast approximate anti-aliasing are consistent on the PS4 and Xbox One. The quality of textures is amazing at times and the 60 FPS frame rate gives it that added bit of realism and fluidity. Admittedly, image quality is superior on the PS4, most likely due to its consistent screen pixel density and the FOV (field of view) clarity being better than the Xbox One.

Gameplay is capable of holding strong at 60 frames per second. There is a drop to 50 FPS and little fluctuation during heavy sequences with lots of explosions and drones flying around. Again, it’s minimal and unless you’re used to consistent 60 FPS on the PC, you’ll hardly notice it. Note that multiplayer on the Xbox One and PS4 hardly sees any drops in frame rate, staying between 58 and 60 frames per second. 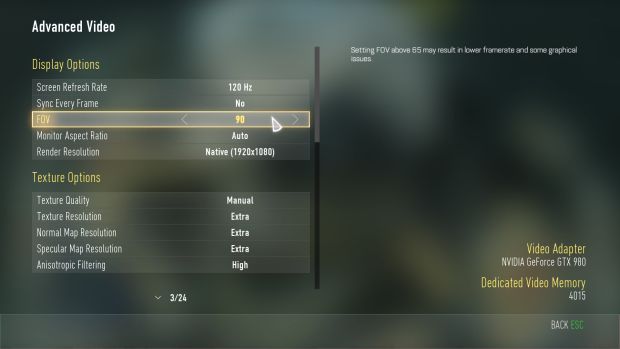 The PC version comes packed with a ton of variable graphical options.

The PC version is the obvious benchmark for current gen platforms given the range of graphical options available. PC gamers can choose a myriad of settings including the dynamic light limit, depth of field, motion blur, subsurface scattering, enhanced subpixel morphological anti-aliasing, supersampling, depth prepass and much more. Those with stronger GPUs will definitely benefit more.

We tested Call of Duty: Advanced Warfare on two key configurations to demonstrate the optimization done by Sledgehammer. The first was an Intel i7-4930K and a GeForce GTX 690 with the resolution set to native 1920×1080 and with 2x SMAA. Frame rate was almost consistently at 60 FPS with less observable drops when the same scenarios were compared on the PS4 and Xbox One.

The second configuration utilized an Intel i3-4310 and a Radeon R9 280. The game’s reliance on the GPU was laid bare in this test as the frame rate varied between 30 to 60 frames per second. Regardless, Advanced Warfare manages to scale itself admirably on the lower powered Intel i3 processors. Those facing issues with the frame rate should lower settings for shadows and the dynamic light limit along with disabling subsurface scattering, SSAO and medium distance ambient occlusion.

Gameplay comparison between the PS4, Xbox One and PC versions.

The real kicker is in comparing the Xbox One and PS4 versions to the PC. In terms of texture quality, anti-aliasing, frame rate and draw distance, all platforms are on fairly even ground with the PS4 version coming the closest to the PC’s quality. Cut-scenes tend to cause subtle frame rate drops as well across all platforms with higher-end PC GPUs facing less issues.

Several other key areas where the console versions fall short is in their choice of SSAO while the PC version takes advantage of NVidia’s HBAO+ for texture shading. There are also some oddly blurred textures when viewed close-up as compared to the PC’s sharpness, likely due to a less heavy grade of anisotropic filtering compared to the PC version.

Oddly enough, we noticed some issues on the PC when “Cache Sun Shadow Maps” and “Cache Spot Shadow Maps” were enabled. Textures became messy in some ways. Enabling these results in to texture disorientation and everything looks messy.

Comparison between the PS3 and Xbox 360 versions.

Sadly, as is to be expected, the PS3 and Xbox 360 versions are definitely not the best platforms to experience Call of Duty: Advanced Warfare’s graphics. There’s no physically based rendering which significantly affects how the lighting is reflected and refracted off various objects. The lack of diffusion and absorption of light across various character models and environmental items makes the game come across as less realistic overall, especially when looking at faces. It also doesn’t help that there aren’t any advanced lighting options.

It seems that the task for a locked 60 FPS frame rate across all platforms was too much for High Moon Studios to handle, even with all the cuts made to the graphical options. Both the Xbox 360 and PS3 run at below 720p resolution resulting in blurrier images and shabby draw distance. Texture quality is low and suffice to say, they simply don’t compare to the PS4 and Xbox One.

Sledgehammer Games has worked extremely hard to make sure that PS4 and Xbox One users got their money’s worth with Call of Duty: Advanced Warfare. Though the PC is still the superior platform for experiencing everything the game’s visuals have to offer, the PS4 and Xbox One versions are a close second. The parity between the Xbox One and PS4 is equally amazing but the latter ekes out victory in several key areas, especially with a stable 1080p resolution.

It’s a shame that the Xbox 360 and PS3 are already being left behind in terms of what they’re capable of in this generation. At the very least, Call of Duty: Advanced Warfare provides more of a reason to experience the game on PS4 and Xbox One as opposed to the PS3 and Xbox 360. That’s a testament to the refinement and utilization of the current gen consoles’ resources by Sledgehammer Games.

Even without comparing the graphics to Ghosts, Call of Duty: Advanced Warfare’s visuals stand on their own amazingly well. This is arguably one of the better looking first person shooters of 2014 and undoubtedly the most graphically superior Call of Duty title till date.