Treyarch has done possibly one of the greatest jobs creating the ‘Escalation’ Map Pack, which is the latest DLC for Call of Duty: Black Ops, I have seen in a long time.  First of all there was Modern Warfare 2 and a combined decision was made Activision, among others, that future Call of Duty Map Packs were going to cost 1200 Microsoft Points or $15.00 which was originally downright outrageous.  At first it literally was a rip off but they new as big as the franchise was people would buy it anyway and of course they were right, making A LOT of money in the process.  Before this all happened, Treyarch was used to bringing the fans a good deal on map packs for 800 Microsoft Points which included a new zombie map in each one with Call of Duty: World at War.  Well now I have played a map pack that seems that Treyarch put their heart and soul into to bringing you five maps that are very well made with a Zombie map that has a whole new twist added to it. 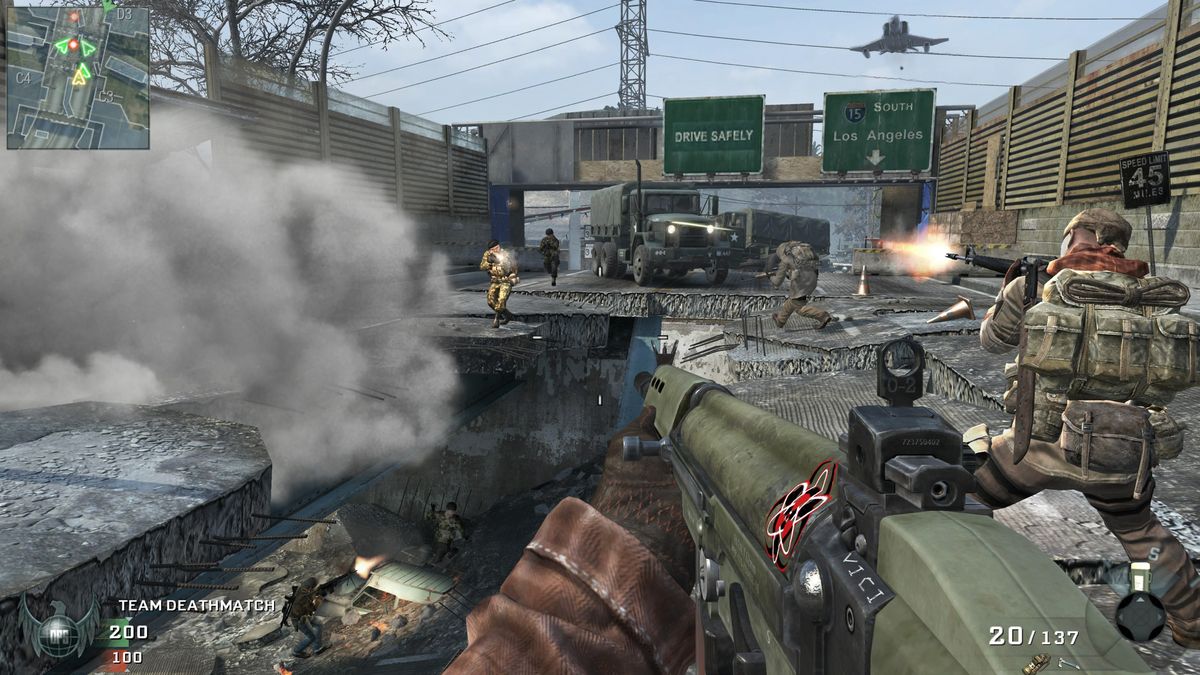 While the new Zombie map is quite frankly amazing by itself, I will start off with the other four multiplayer maps.  Each of the four multiplayer maps have their own unique aspects to them that bring more to the table when it comes to putting out DLC maps for the game.  In my opinion as small as some of these things are, they are what can make a map much better than previous maps and can also give opportunity for random, unique or well strategically planned events to happen over the course of a the match.  This is something that definitely makes the ‘Escalation’ Map Pack in its entirety more worth the money.  All the maps also seem to try to bring it back to the beginning as well being laid out for less camping and more run and gun gameplay as well as adding much more complex ways to add strategies.  I am not saying there is no where to camp, but I am saying that it is much more satisfying as much as it is enticing to use the map in combination with the games mechanics to go about and enjoy the match rather than camping somewhere, while still giving snipers what they need to snipe. 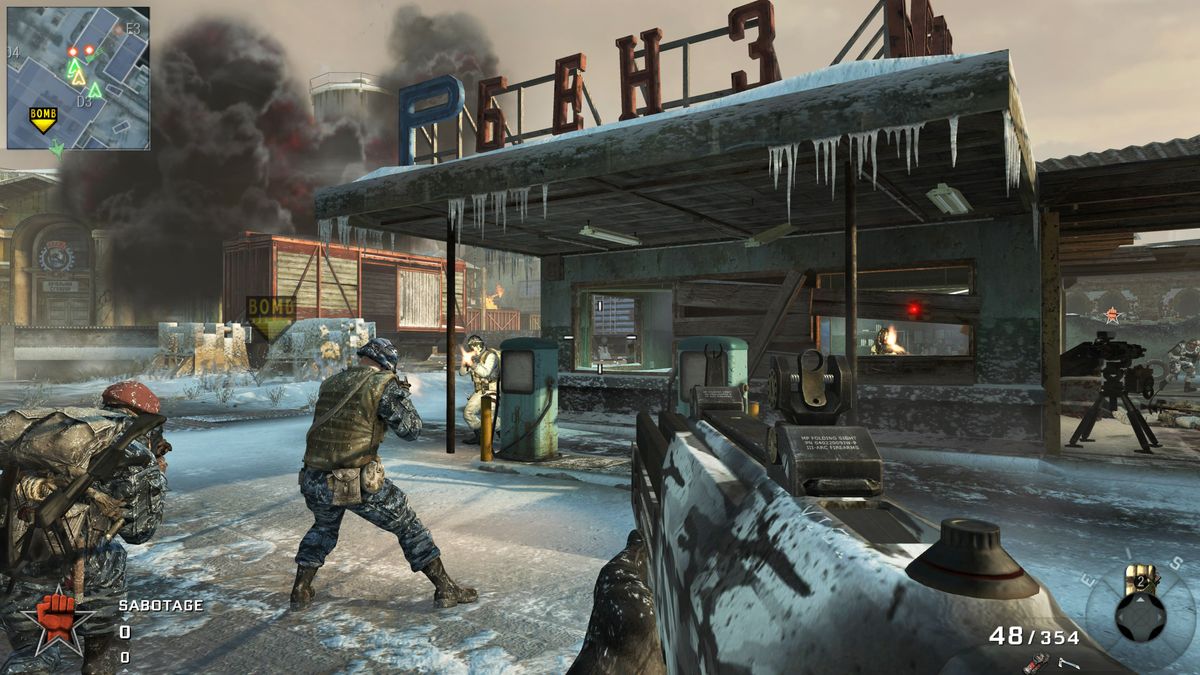 Starting off with the map Convoy as the name says, it is or was a US Convoy that has seen the battle of an ambush from the Soviet forces.  Convoy is a rather large map and that is being modest, because it really is huge compared to the average Call of Duty map.  This a good thing for snipers especially as there are multiple levels of the map.  A highway runs through it, being able to drop down underneath it, with bridges and debris from the aftermath of the ambush everywhere.  You will have to watch you back because anything could be going on anywhere on this map, with every nook and cranny the battle has created it makes for some intense gameplay.  Next up is Stockpile which is a map where you find tight quarters around the whole vicinity with there still being long stretches and roads perfect for sniping.  The map is a rural Soviet town and has a sense of familiarity to it when it comes to Call of Duty.  The most unique thing about Stockpile is the building in the center of the map that has multiple entrances.  They entrances are gates that can be opened via switch from the outside as well as the inside but an alarm goes off when a gate is being operated.  You can have fun trying to hold down this building with some friends or you can really use strategic methods and take advantage if the buildings aspects in objective modes. 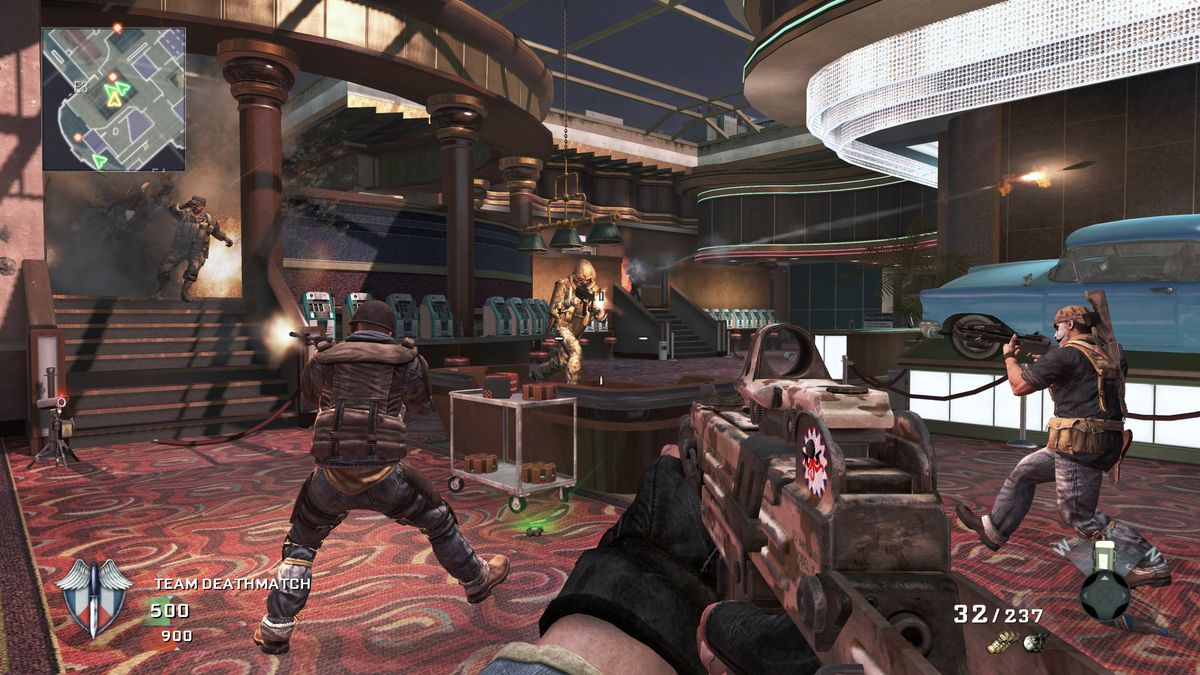 The other two multiplayer maps are Zoo and Hotel, which both do not resemble your typical Call of Duty map… I mean a Zoo?  But they are actually both very cool maps and I’m not just saying they just look cool either.  Hotel is  a map set in Cuba where occupying the upper ground is a good thing.  The map is filled with things like a pool and even working elevators which might prove to surprise you in certain situations.  As funny as elevators might sound, you would be surprised how they could be used strategically as decoys or for real depending on what game type you are playing, to gain the upper hand.  With the pool area in the middle the Hotel surrounds the outside area, making it easy to spot anyone outdoors with all the windows in the place, but there is still plenty of cover outside.  Moving on to the fourth map, Zoo is rather interesting.  It is kind an odd map on my opinion, but still fun and don’t worry it is abandoned so you won’t run into any lions.  You really don’t want to get caught out in the open on Zoo and there is a monorail system that has a narrow track that goes all around the map.  If you can get up to the monorail track, you are basically nearly unstoppable, as long as you grab onto the scarce cover along the track.  It is almost like a king of the hill type of deal with no matter what mode your playing, being in control of the above track usually always gives you the upper hand.  Zoo is also a good map for snipers giving them long range battle especially if you are up top.  Down below it is not like it is completely open though, it is a Zoo so there are a bunch of animal enclosures with rock tunnels and with the map being at night it is hard to see at times. 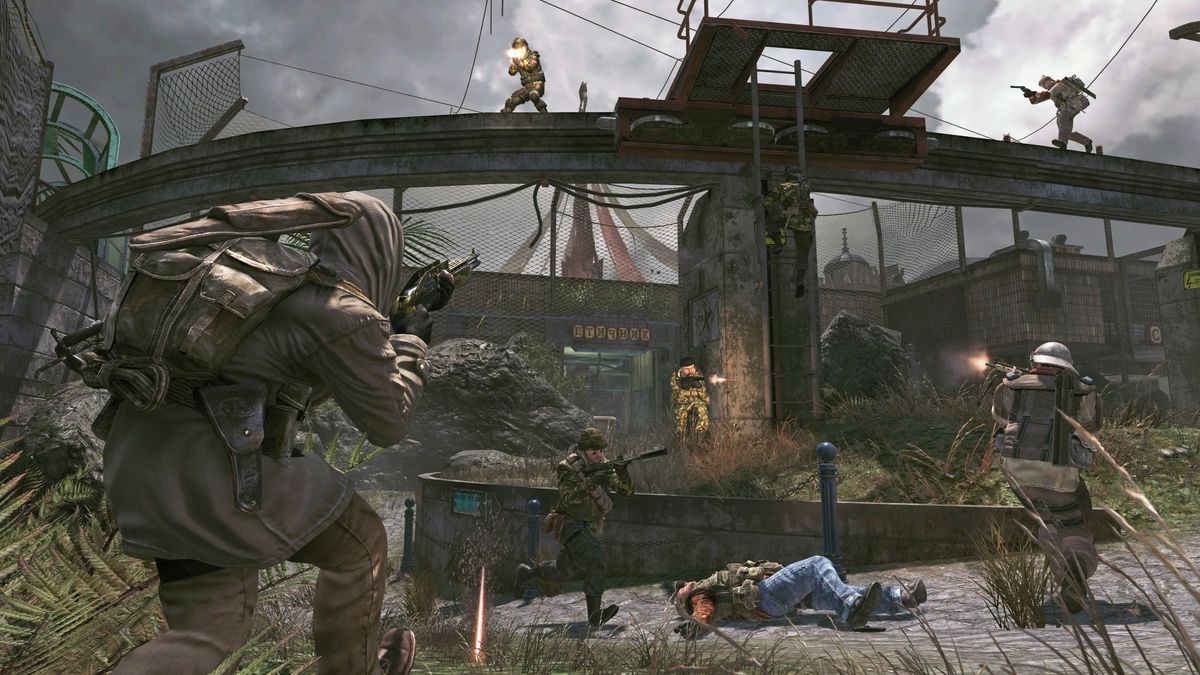 Finally lets get down the zombie map Call of the Dead which I know for a fact some people just bought Escalation strictly for this.  I will certainly not judge those either because Treyarch as usually really went overboard on this one, with stuff you never saw coming.  I suppose we will start with the all star cast that you play as that everyone knows if not directly then indirectly.  The one and only ‘Buffy the Vampire Slayer’ (TV Series), Sarah Michelle Gellar is one of the characters and she looks like she is ready to kick ass.  Along with her you have Danny Trejo (from Machete, but has been in so many films & TV shows), Robert Englund (the one and only Freddy Krueger from Nightmare on Elmstreet) and Michael Rooker (once again an actor who has been in many films & TV shows).  To top it off TreyArch also got the king of all zombie films George A. Romero who has produced Night of the Living Dead, Dawn of the Dead, Land of the Dead and the ‘Dead’ list goes on.  Of course you have your classic four player co-op, but starting single player up on Call of the Dead shows off an awesome cut scene where George Romero is trying to direct a zombie movie that goes wrong when the zombies are real! 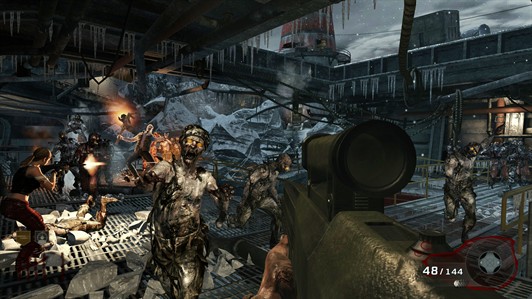 Call of the Dead

Now as cool as that is, that is only the beginning as George Romero turns into some sort of super zombie that is nearly unkillable as he follows you around as waves of zombies are coming after you.  To break the ice.. no pun.. the map is on a snowy, icy lake house with a giant ship behind you that once you have the money can run around in as well as a light house.  Big map with zombie coming out of the ground, cave ceilings, basically everywhere.  So you have water at the bottom which if you stay in to long you will freeze to death but is good way to get around as well as slow good old George down when he gets pissed.. oh yeah when you you shoot at George he gets pissed and won’t stop running after you until you lead him into the icy waters.  Then they have added stuff like a zip-line and a platform that will fling you across the map.  Not to mention that the map is filled with Easter Eggs with the most notable one being the previous World at War Zombie Cast speaking to you behind a steal door, asking you to do things which will ultimately grant you a Wunder-Waffle which you should all know by now is a zombie killing machine.  That specific Easter Egg though has a different method of solving depending on if you are playing singleplayer or co-op, but there are also plenty of other Easter Eggs like radios and more.  Bottom line is that this has to be the most fun as well as interesting Zombie killing map I have ever played… period. 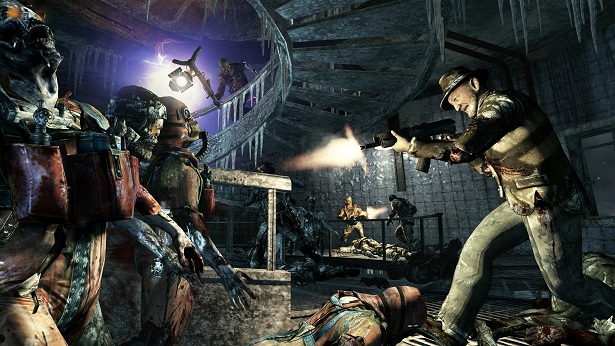 In closing I would have to say all in all this is the best DLC I have ever played in any of the Call of Duty games.  All the multiplayer maps are fun and have intense combat a lot of the time in them, with out things slowing down while you are looking for five enemy snipers.  It really kind of brings back the kind of gameplay Call of Duty was meant to be, where it was not about camping but out thinking your enemy or just plain shooting first.  It is too bad that Playstation 3 and PC users will have to wait a month to play this Xbox 360 currently exclusive map pack, because if I could have any map pack it would be this one.  I know it is not saying much with there only being one other map pack that was released months ago(First Strike), but it is tons of fun with a lot less aggravation.  I found myself ripping through kill-streaks and I am no pro, but I think it was simply because I didn’t get shot in the back by someone camping crouched in a little corner in the midst of my spree.  When it comes to the Call of the Dead zombie map, Treyarch went above and beyond to make it a whole new experience for this one, so  if I were you I would certainly not want to miss it.

This map pack actually adds to the multiplayer giving players more options to be creative with a shooter. The Zombie map is as always a big surprise and the best I have seen.

A bit pricey but worth it, if you have friends to play with.

A Map Pack with 4 multiplayer maps and 1 zombie map that is actually of the best quality of its kind.

A copy of this game was provided by developer/publisher for review purposes. Click here to know more about our Reviews Policy.
Tagged With: call of duty, Call of Duty: Black Ops, Call of the Dead, Escalation DLC, pc, ps3, xbox 360