Call of Duty: WWII Review – War Is Still Kind of The Same

This sure is more Call of Duty.

Since 2003, Activision has released sixteen full-length Call of Duty games, if you count standalone spin-offs like Call of Duty: Finest Hour and Call of Duty 2: Big Red One. Games in the series have been created by original developer Infinity Ward, Treyarch (who has made the franchise’s most commercially successful games with the Black Ops sub-series), and newcomers Sledgehammer Games.

The series has traveled from the beaches of Normandy to the rivers of Vietnam and even into space. While the series started in World War II, there hasn’t been a game set in the conflict since Treyarch’s awesome Call of Duty: World at War, which was released in 2008. It’s been nearly a decade since a Call of Duty game explored the most costly armed conflict in human history, and Sledgehammer Games has never made a game set in the time period. The goal is here is twofold: to return the series to its boots-on-the-ground roots, which were lacking in the last two titles, and to the conflict that defined the series before its excursion to a technology-focused future for a change of pace. 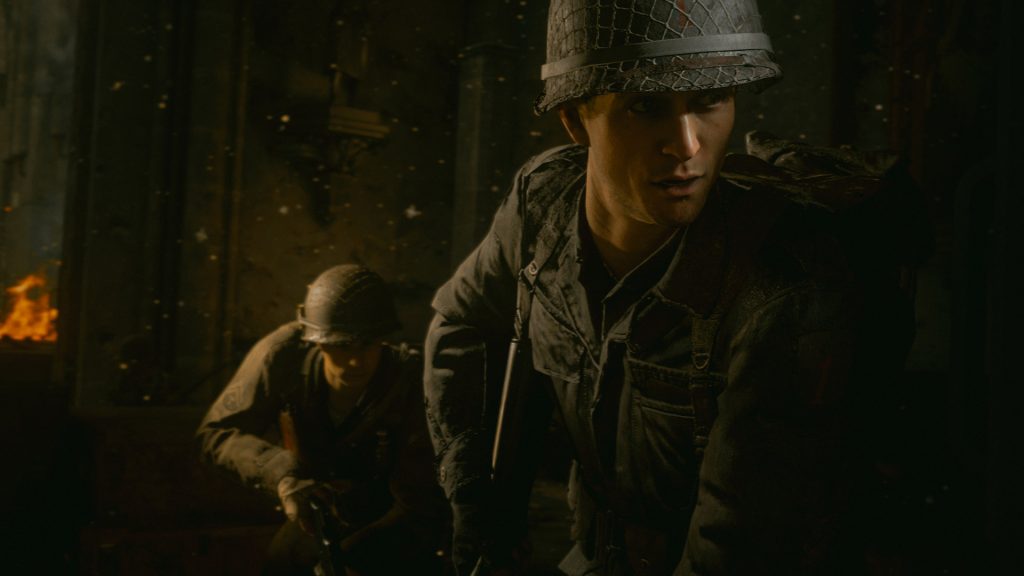 "WWII wants to be both a game that works on a narrative level and a bombastic, big budget first-person shooter. As a result, you get a lot of scenes that alternate between the excellent and the outright laughable."

The core is the new campaign, which is intended to be a more serious, thoughtful meditation on the sacrifices of the Greatest Generation and the horrors of war. Unfortunately, while the game really tries, the bar for narratives that marry the elements of their gameplay with their stories has been raised significantly in recent years, and it doesn’t quite come together. WWII wants to be both a game that works on a narrative level and a bombastic, big budget first-person shooter. As a result, you get a lot of scenes that alternate between the excellent and the outright laughable.

Characters will have heartfelt conversations about the girls back home in one scene, and in the next, after a traumatic event, your lieutenant will pat your character on the shoulder and tell him things will be okay, only for your character to literally look down at the blood on his hands. Perhaps Sledgehammer is an accurate name for the studio behind WWII, because what’s here is about as subtle dropping an anvil into a swimming pool. And don’t even get me started on how stupid and absurd the train sequence is in a game that takes itself this seriously. When you see what happens there, you’ll probably only be able to laugh. None of this is “Press X to pay respects” bad, but it gets close.

Frankly, if you’ve ever played a video game set in World War II in the last two decades, or have ever seen any World War II film make since 1980, you’ve seen almost everything WWII has to offer in its campaign. You play Daniels, a farm boy from Texas and a private in the famed 1st Division. Your squadmates are made up of well-worn tropes: the hard-as-nails Jewish kid with something to prove, the whiny, college-educated nerd, the kindly lieutenant who only has the best interest of his men in mind, the squad wise-mate with an Italian last name, and a sergeant with a tragic past. 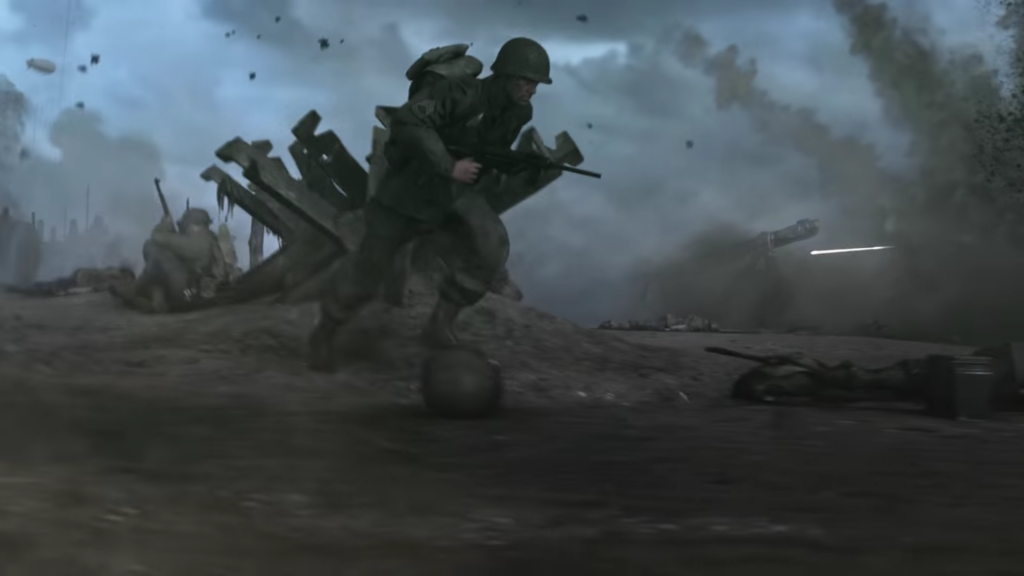 "You have been here before, landed on these beaches before, cleared these streets before, and stormed these houses before, and despite how good many of these missions are, it is impossible to escape the constant feeling of déjà vu, or to avoid making comparisons to older games."

The game wants you to care about these characters, but the only ones who inspire any sort of complex emotion are Zussman, your aforementioned hard-as-nails best buddy, and Pierson, the sergeant. The former you get when you save Zussman’s life in one the game’s opening mission, and the latter you get from Pierson’s importance to the story. Everyone else is window dressing, designed solely to fill a purpose. It’s a shame, because war films and games ride on the relationships you build with their characters, how you come to appreciate their sacrifices, and the things they go through with one another. Without a strong cast, WWII lacks that emotional connection.

The story is a banal affair. Unlike many of the original Call of Duty games, you’ll largely stay with one squad, guiding Daniels and crew from the D-Day landing to the liberation of Paris and the Battle of the Bulge. World War II games have done these events to death, and it’s easy to feel like you’ve done all of this before, especially if you’ve played Call or Duty or Call of Duty 2, or even Medal of Honor: Allied Assault. Other games in the series have gotten around this problem by being the first to tell these stories or by focusing on different aspects of the war, as World at War did with its emphasis on the Pacific Front. WWII doesn’t do that. You have been here before, landed on these beaches before, cleared these streets before, and stormed these houses before, and despite how good many of these missions are, it is impossible to escape the constant feeling of déjà vu, or to avoid making comparisons to older games.

Unsurprisingly, WWII is at its best when it deviates from the traditional Call of Duty formula. My favorite mission involved a stealth operation in Nazi-occupied Paris, in which you played as both Daniels and a female member of the French Resistance in disguise. This is true of the gameplay, too. The biggest change is the return of health packs. They’re the only way to restore your health, which means that you have to use them sparingly, and constantly search for more. This switch works really well, creating genuine tension in situations where you’re low on health and without a way to heal. 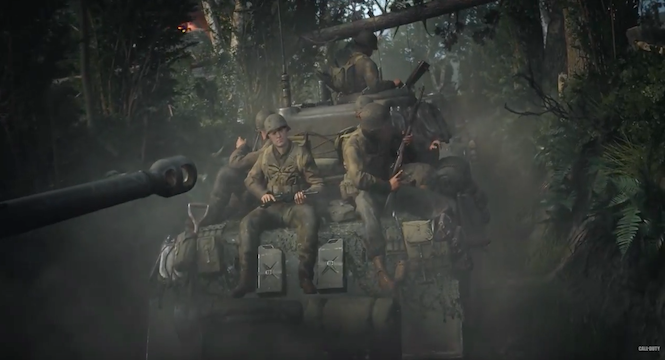 The other new addition to the campaign is the addition of abilities for your squadmates. Kill enough Nazis, and you’ll fill up their respective meters. Zussman, for instance, tosses you health packs, while another will refill your ammo, replenish your grenade supply, and allow you to call in artillery. These abilities are meant to build your relationships with these characters, and to an extent, it works. You’ll have to keep track on who’s with you at any given point if you want to succeed, but the mechanic’s implementation often causes problems. Using someone’s ability requires being very close to them, which means you’ll spend some firefights sprinting across the battlefield, hoping to grab a health pack or some more ammo before you’re gunned down. That is, when you’re not stuck in an obnoxiously long scripted sequence or being forced to endure some of the worst Quick-Time Events in recent memory.

Don’t get me wrong. WWII’s campaign isn’t outright bad, but its quality veers wildly, and it’s extraordinarily derivative. Once you’re done with the campaign, which is little more than six hours long, you can hop into the multiplayer, which is where the real action is. WWII has slimmed Call of Duty down, opting to return the focus to the days of old. The biggest change here is the addition of Headquarters mode, which acts as a sort of social hub, much like the Tower in Destiny. You can walk around with other soldiers (when it works. The system has been such a disaster so far that Sledgehammer has temporarily made it single-player only it so that it will run properly), practice at a firing range, enter the one-on-one arena, or call down loot boxes. Yes, there are loot boxes. They don’t affect game balance yet, but you know they will down the road.

Headquarters is fine, if unnecessary. The multiplayer is more or less how Call of Duty used to be – some customization options built around period specific guns and modes. The main change here is Divisions. You choose one when your build your class, and each offers specific upgrades. The Infantry, for example, allows you to bayonet charge with your assault rifles, while joining the Airborne allows you to equip your SMGs with silencers. Naturally, leveling each one unlocks more perks. Other than that, Call of Duty is more or less the same as it’s been– gun attachments, perks, and killstreaks – just streamlined. The modes are similar too. War mode even returns from World at War, just with better series of objectives that are fought over huge maps and change should the attacking team make progress. One team, for instance, might be trying to storm a beach while the other defends it. It’s a fantastic mode and a welcome return that feels more like something out of Tribes or Overwatch than Call of Duty.

"Yes, it all looks gorgeous, and it’s largely well made, and if content and game hours per dollar is what you care about, then WWII delivers."

Oh, and Nazi Zombies returns, too. Like most other things revolving around Call of Duty’s multiplayer, it hasn’t changed much. You’re still B-list celebrities and you still fight Nazi zombies for cash to get better abilities – infinite ammo, lighting strikes – but this is still Nazi Zombies mode. It hasn’t changed too much since 2008 (it was introduced in World at War, funnily enough), and it seems unlikely to change much next year either.

Yes, it all looks gorgeous, and it’s largely well made, and if content and game hours per dollar is what you care about, then WWII delivers. But we have done all of this before, multiple time, and we’ll probably do it all again. Call of Duty WWII is a good game, and there are welcome changes, subtractions, and additions here. But that’s all it is. The more things change, the more things stay the same, and WWII sure is more Call of Duty.

Looks gorgeous. Some unique campaign missions. Good gunplay. Solid maps and modes in multiplayer. Lots of way to play. Lots of value for your dollar.

Exceptionally derivative. Attempts at seriousness either work great or are laughably bad. Poor use of QTEs. Some sequences are way too scripted. Headquarters mode doesn't work properly as of this writing. It's just more Call of Duty.

Final Verdict:
GOOD
A derivative, middling campaign, good multiplayer, and a ton of content means that Call of Duty: WWII is more Call of Duty - for better and worse.
A copy of this game was provided by Developer/Publisher/Distributor/PR Agency for review purposes. Click here to know more about our Reviews Policy.