This is a game journal for Empires of the Smoky Skies, a steampunk scenario for the Civilization 5: Gods and Kings expansion. My name’s Robert Green, and each week I’ll write a new journal for Gaming Bolt. I call it Campfire Gaming.

Welcome to the world of tomorrow!

Step right up and witness the marvels of progress. I beg you please, put down your sword. And pick up a machine gun! Get off your high horse. Get in a tank instead! Need to kill someone? How about 10,000 people? Buy a Flying Fortress!

This, my dear friends, is progress. This is Civilization 5: Empires of the Smoky Skies!

There’s only five factions to choose from, but all of them are unique to the scenario. I decide to be Cyrus Rotheram, leader of the Eruch Empire, because their airships get +2 movement and they build something called the aerodome. Both of these things sound awesome because airships are awesome. With this bonus in mind, my self-assigned goal is to build a massive fleet of airships and rule the smoky skies. 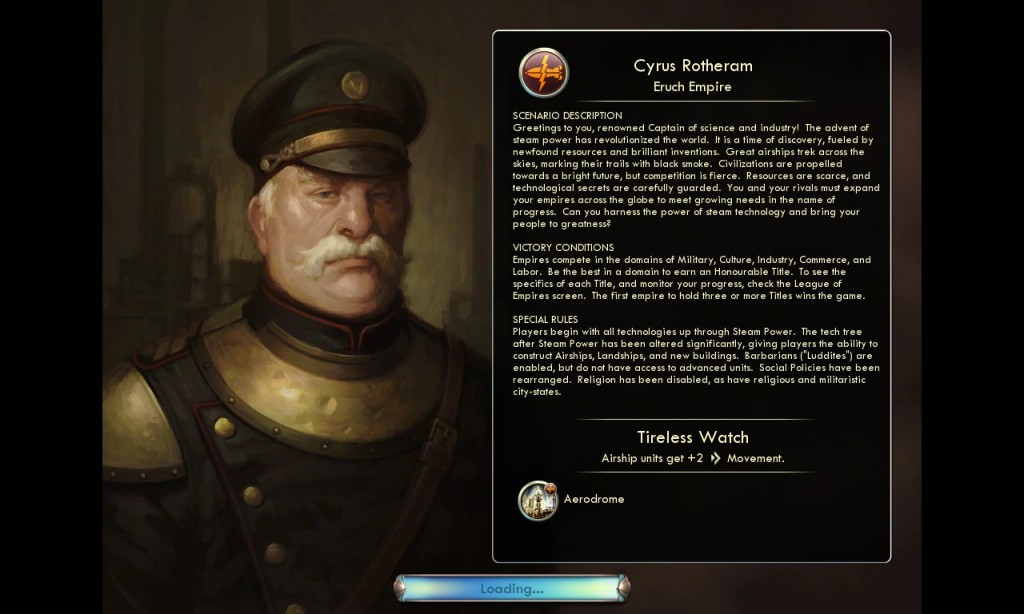 I start out with 3 settlers, a couple of scouts, and a couple of land ironclads, which are exactly what they sound like. They’re ironclad ships, except, you know, on land. With wheels. Which is awesome. They’re essentially tanks but bigger. I tell one settler to start a city right where he stands. This will be the capital of the Eruch Empire, creatively named Eruch. 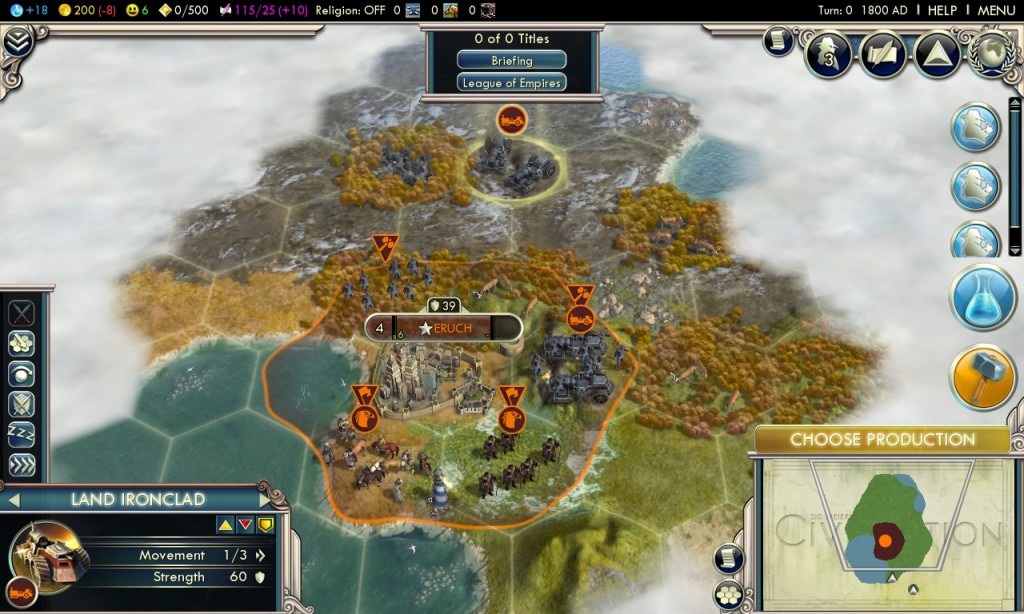 From the very beginning I send my land ironclads out looking for trouble. They find the city/states of Capetown and Hong Kong. That’ll do. In the meantime, I’ve sent one settler north and one south, giving me three cities for the Eruch Empire. I don’t plan on building anymore. Other cities will be gained through conquest. 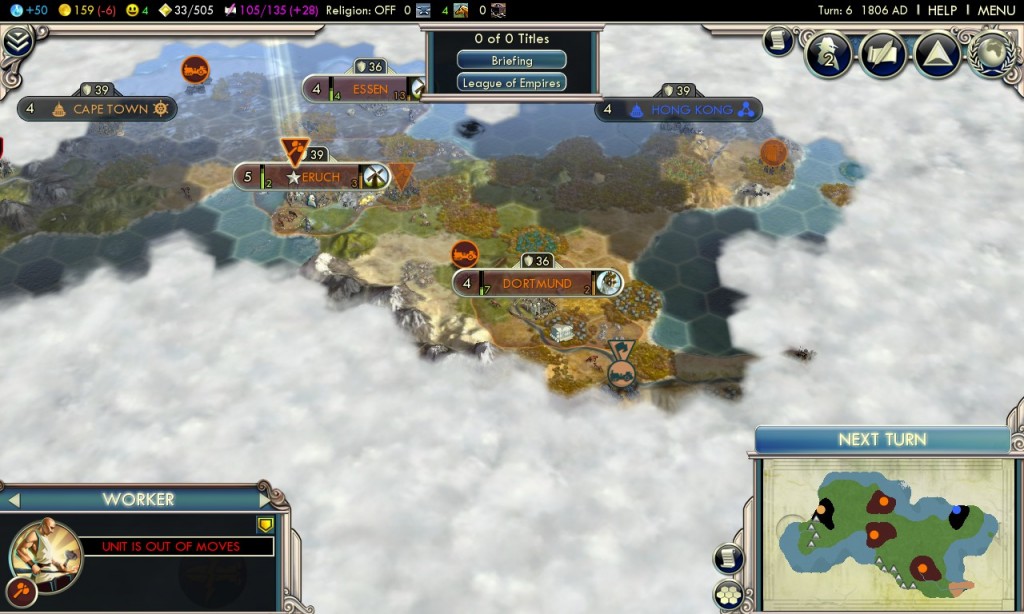 I get my first social policies and decide it’s time for us to go communist. I’m going to build a production and scientific powerhouse, then I’ll be able to quickly create the best military units available. I also adopt a planned economy to make my factories better.

I research analog computation. It allows us to build the science and production boosting Difference Engine. Build a Difference Engine in every city and you can build the Analytical Engine national wonder. It counts as a wonder for victory conditions, and greatly increases science and production further still. Once I complete that and build a factory in every city, my economic war machine should be ready for battle. Phew. That was exhausting just to describe.

I have a lot of work to do.

The problem with this approach is that in order to get my enemies to bleed blood my empire will have to bleed money. My economy is failing and I’ll be out of gold in just a few turns, which would be quite embarrassing seeing how the game really just started. To make matters worse, compared to the rest of the civilized world my citizens are miserable. 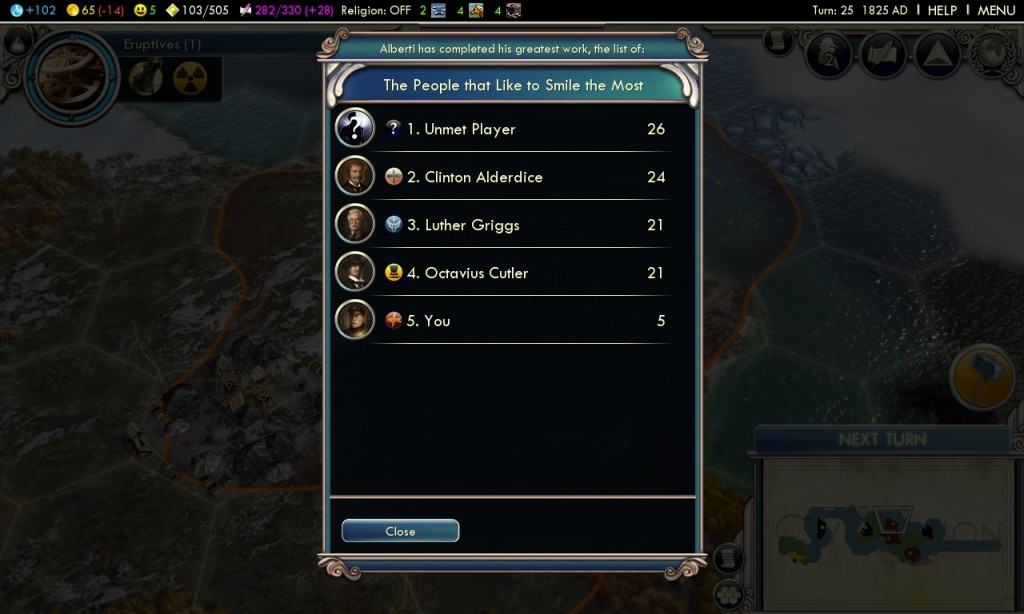 A good day for an Eruch Empire citizen is a day where he doesn’t kill himself.

Yikes. Also, notice at the top that I only have 65 gold but I lose 14 every turn. I’m no economist, but if this pattern keeps up I’m pretty sure I’ll be bankrupt very soon. If I can get my production and science up early, I can worry about the rest later. Will I develop an unstoppable warmachine, or bankrupt myself in the process? It’s the classic communist dilemma.

As much as I want to take down Capetown, I’m just not ready. I find some nearby barbarians southwest of there that give me an excellent opportunity to test my steamy muscle. 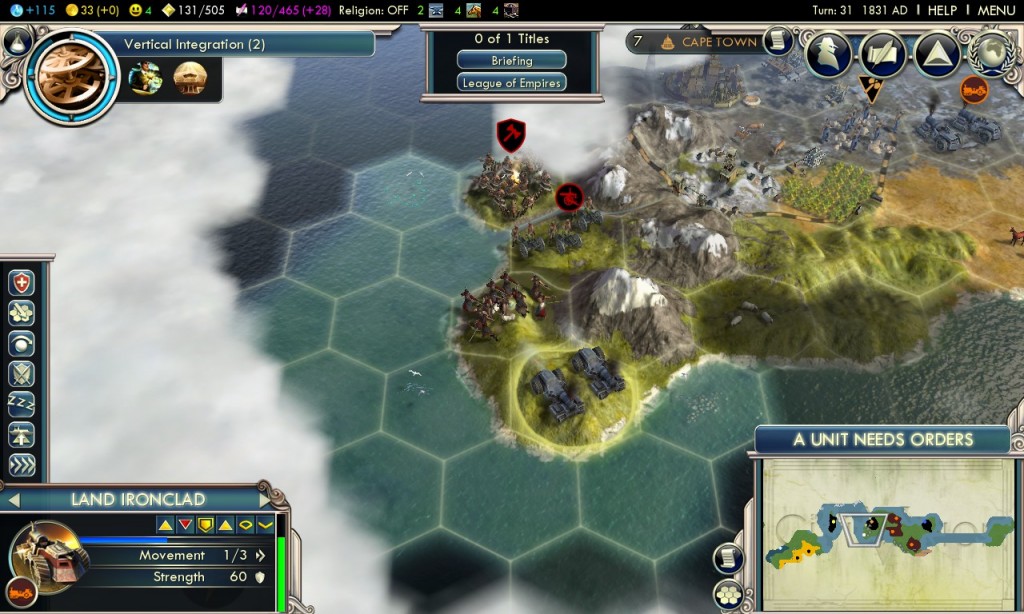 As I’m civilizing the enemy archers with bullets, I get a message from Capetown that changes everything. Apparently the barbarians I’m currently murdering have been a thorn in Capetown’s side for too long, and they’ll ally with anyone who takes them out. I decide that I will be that anyone.

Allying with Capetown will give me their resources without actually having to take them over. At the same time, one of my spies has rigged the elections in the nearby city/state of Hong Kong. The new puppet leader immediately forms an alliance with me, and my formerly militaristic approach is turning sickeningly diplomatic.

I defeat the barbarian enemies of Capetown with relative ease, and between Capetown and Hong Kong an abundance of luxury goods pours into my empire. These luxury goods distract my citizens from their dreary lives of factory work and arms assembly. The happiness of my empire is starting to climb, and so is my economy. Allying with Capetown and Hong Kong has fixed a lot of my major issues, allowing me to focus on the production and science that will make my military the envy of the civilized world.

The only problem now is I still don’t have anyone to shoot. And I was really hoping to shoot someone.

The victory conditions open up throughout the game as people discover new technologies. The first victory condition, building the most sophisticated military machines, goes to one of my opponents. Titles can be lost and gained even after initially given though, so if I ever do build more than him the title will go to me. The current man with the biggest army is my neighbor to the direct south. I’m sure this won’t cause future problems.

Finally, the moment I’ve been waiting for arrives. My empire finishes researching airships and we enter the cleverly named Airship Era.

Yet I can’t build a single ship. It turns out my glorious airship fleet will need a lot of a resource I don’t have. Until I acquire it, I’ll only have a glorious pile of scrap metal. The resource is called aetherium, and I take a look at the world map to see if there’s any in my empire.

So I do what any 19th Century empire does in situations where they don’t have something they want. I bully it away from someone smaller than me.

There’s a huge cache of 12 aetherium nearby. It belongs to the city/state of Ragusa, just southwest of the Eruch Empire. It’s a bit of a catch 22. I need aetherium to build my deadly fleet, but I need my deadly fleet to get aetherium. I’ll have to settle on ground forces and prepare for an amphibious assault. 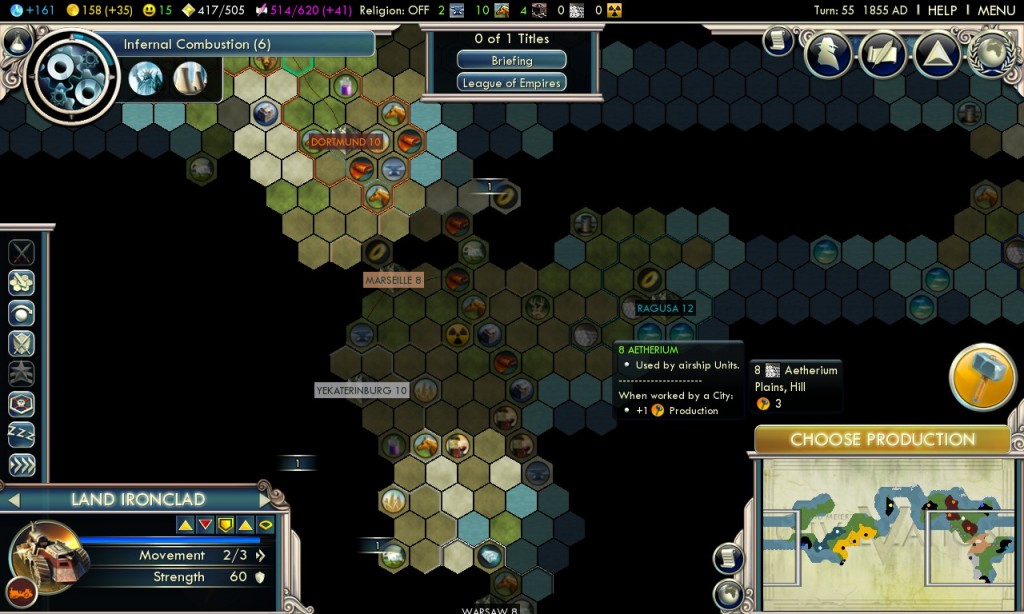 You can see my southern city of Dortmund at the top of the map, and Ragusa in the center of the map southeast of my empire. The plan is a grand naval invasion that will move across the huge gulf between us and them. As I begin to make preperations, it becomes clear that I’m running out of time. 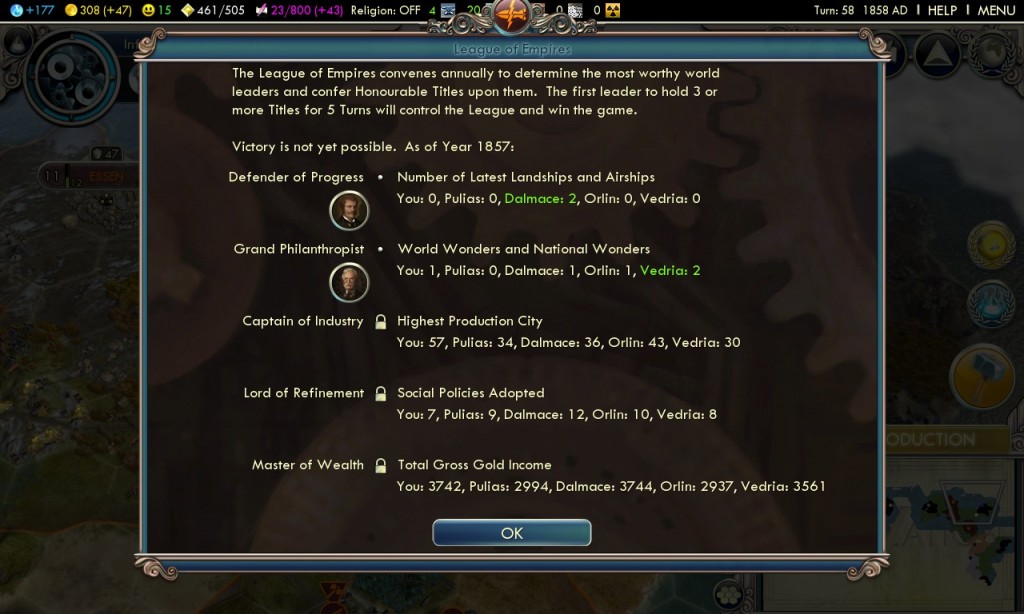 Another title is handed out, and it’s not to me. One of my rivals has the most sophisticated army, and another has more wonders than anyone else. I have nothing, and no time to waste on this invasion. I’m still confident my slow economy building will pay off in the long run, but only if this invasion goes well.

The great engineer Leonardo da Vinci is born in my empire, a sign that my production is worthwhile after all. I have him immediately build a world wonder to get myself back in the race. He completes the Pentagon, allowing me to upgrade my units at a much cheaper price.

A golden age dawns at the beginning of the invasion. I mean this quite literally. 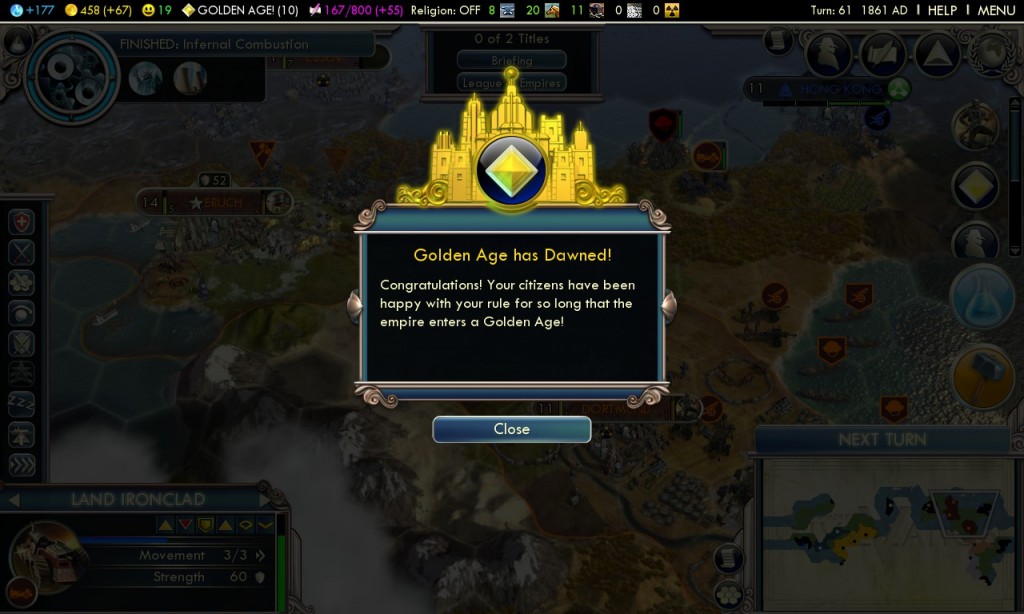 Things are turning around. My people are happy, or at least no longer suffering from chronic depression. We’re making a lot of money, and I think production and science are going well. The invasion to make my sky fleet of doom a reality is underway. This will either be our finest hour or a humiliating defeat. Place your bets now. 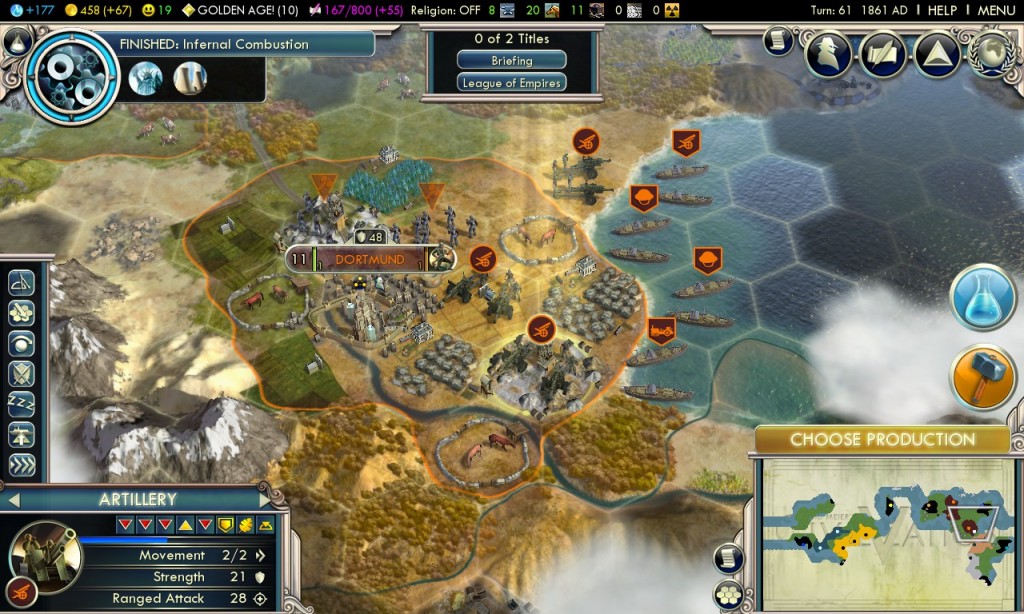 The army lands on the enemy shores and quickly surrounds the city of Nagusa. We bombard it with long-range artillery as the land ironclad blasts away up close. Soon my bolt-action rifle wielding infantry occupy the city of  Nagusa. The victory was swift and desisive. The war against this city/state is already over and I am the victor.

To the victor go the spoils.

I now have 22 aetherium (there were 12 in Nagusa, and I have a special ability that doubles my strategic resources). That’s essentially an endless supply. In celebration of this victory against the evil freedom hating Nagusa, I complete the Statue of Liberty in my capital. This gives me three wonders right when a new title opens up: city with the highest production rate. Yes, it’s my capital.

I’ve gone from 0 to 2 titles just like that. One more and I win.

I’ve made a huge power play in just a few short turns, and the other players aren’t happy about it. Three of my four opponents denounce me immediately. My empire has become a gigantic target, and I couldn’t be happier. I’ve been itching for war this whole time. I’m still last as far as happiness and culture, but those things were never my goals.

With a monster production and very good science I begin the construction of the airship fleet and immediately settle on a target. I’m going to declare war on Dalmace, the only nation with a better army than mine. If I can destroy their units while keeping my losses to a minimum, then I’ll secure the title for best military and victory will be mine. Dalmace is also the only nation that hasn’t denounced me. Declaring war on them will mean every foreign power hates my guts.

It’ll be the Eruch Empire vs the world.