Welcome to Campfire Gaming, a weekly feature on Gaming Bolt where I dazzle you with stories of video game heroics. This is the second half of the Civilization 5: Gods and Kings scenario Empires of the Smoky Skies. Start with the first part right here.

On paper, the enemy has a better military than me. I’m attacking the current Defender of Progress, a title that goes to the person who has the highest number of advanced units in the world. I’ll need a plan.You can see my troops south of Dortmund. The goal is to take Marseille, and use that as a jumping off point to take Dalmace, the enemy capital. The troops near my city of Dortmund will go ahead and move into enemy territory. As they draw the enemy north to defend, my soldiers in Ragusa will swing around and hit the enemy in the south.

What I don’t know is that an enemy city bigger than their capital is in the fog of war to the west. They’re about to hit me in the flank with everything they’ve got.

With the battle lines drawn I declare war on the only opposing faction that doesn’t already hate me. This is Empires of the Smoky Skies: Part 2.

By destroying enemy units and building more of my own I can secure the Defender of Progress title, awarded to the empire that has the most numerous state-of-the-art weapons.

Wait. Did somebody say state-of-the-art? That would be the sky fortress, which I’m currently researching. By sky fortress, they in fact mean a fortress in the sky. Not only can it hold biplanes like a hovering aircraft carrier, but it’s also a powerful attacker as the best airship in the scenario.

Once again I’m going to be late on my plan. I like to be prepared, and before I build airships I want to complete the Eruch Empire’s unique building, the aerodome. Airships built with an aerodome start with a level up so they’re more powerful than regular airships right out of the gate. I want this, but it’ll take time. The rest of my army will start things off as I prepare the fleet.

I upgrade my land ironclads to land leviathans, the most sophisticated tanks the scenario allows. Imagine a tank the size of a city block. Now imagine about three of them rolling towards your city block. Oh yeah. 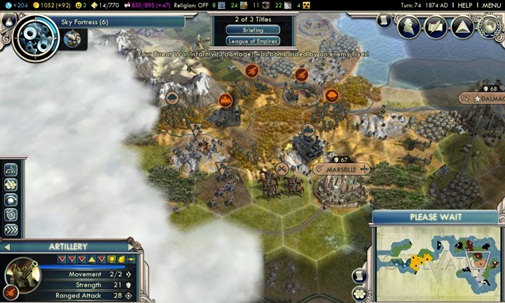 “Stay sharp men. The enemy has the most advanced army in the world. This will be the greatest challenge we… are those horses?”

My enemy has the most advanced army in the world, so I’m amused and somewhat insulted by the horses. Arrogant swine!

My infantry shoot ’em up nicely. To repay the favor, the enemy blasts both of my infantry units to pieces with a combination of artillery and leviathan machine guns. 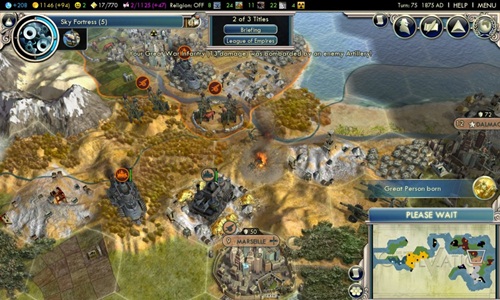 With all signs of natural life dead, the machines rule the field. Leviathans are now the primary unit on both sides of this war as the Battle for Marseille continues. I send in a second leviathan to keep up the pressure, but it has a river to cross and will be a while.

We finally knock their leviathan out of the way and reach Marseille, but it’ll be a few turns before we can occupy. My forces are looking thin and right now I’ve got nothing to reinforce them with as I continue to build the airship fleet. I only have one leviathan on the front line at the moment, and with everything else gone it’s about to face a barrage from two artillery units, the city defenses, and the enemy leviathan next to it. 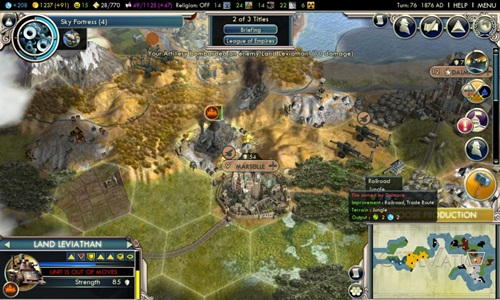 That’s when the backup arrives. A leviathan from the Ragusa invasion arrives on the scene, right behind the enemy artillery. It’s just as I’d hoped. I still have some infantry trudging through the thick forests between Ragusa and Marseille, but I’d sent the leviathan ahead in case I needed it. 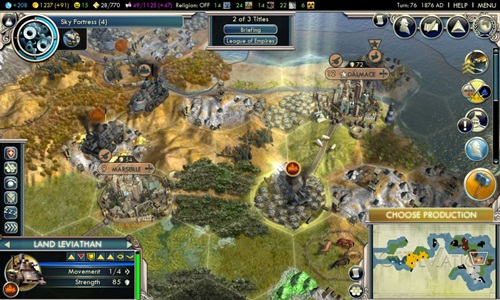 It’s beautiful, and I now have the enemy somewhat surrounded. My artillery can finish off the enemy leviathan while the rest of the forces go to work on the city of Marseille.

That’s when the flank attack comes. Four enemy leviathans roll across the battlefield from their now revealed metropolis to the west, completely catching me by surprise. I hadn’t even known there was a city there. It’s the biggest city in the Dalmace nation.

My leviathans line up with Marseille on our southern flank and the mountain range on the northern side. It’s four leviathans vs three in the enemy’s favor. I have some artillery, but they have city defenses. This is it. We’re both about to lose units that count towards the victory condition I need to win. This battle is what will decide everything. The bullets start flying.

I lose a leviathan.

They lose one too.

I lose another one.

My airship shows up. A streak of black smoke smears across the sky to the cheers of my soldiers.

That’s right. My first airship finally enters the party and drops its vast payload of bombs on another enemy leviathan. It was perfect timing. Just a turn or two more and I probably would have completely lost the battle for Marseille.

My second airship shows up. I’d built two, and both were upgraded with armor penetrating shells thanks to the aerodome I built in two cities. The airships take significant damage, but with an impressive movement of 7 spaces a turn I can retreat them back to my empire with ease. Backup leviathans that I sent out before reach the front line in time for mopping up duty. The war is almost over. My preparation to focus production and wait until I could build a super fleet is paying off right now.

Dalmace and I both lost a lot of units during this war, but only I have the production to quickly replace them. 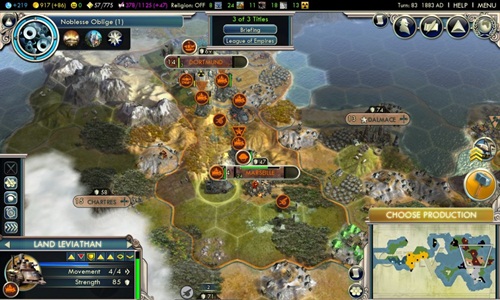 The infantry from Ragusa arrive on the scene and occupy Marseille. I just now took my first of their cities, but I crushed the backbone of their army.

Titles are once again handed out, and I’m given the one for best army. I have three, and if I can keep them for five turns I win. I’m actually a little worried, because another faction on the other side of the world has just one unit less than me. I keep the gears of my war machine turning and continue to crank out units to ensure they can’t catch up.

I finish researching and upgrading my airships to sky fortresses. It’s just a formality now. I’m unstoppable. Here’s me surrounding the enemy capital on all sides. 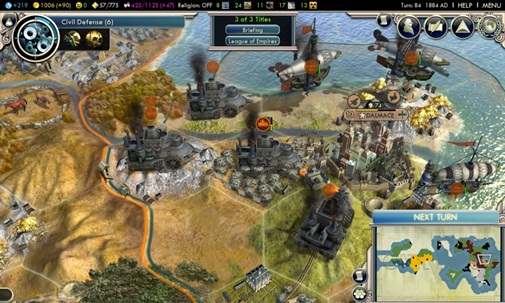 Suddenly, a sound is heard even over the roaring airship steam engines. It’s the sound of the entire population of Dalmace collectively shitting themselves.

This is how it ends. I win the scenario completely surrounding the city of Dalmace. The victory screen appears, and victory is sweet. 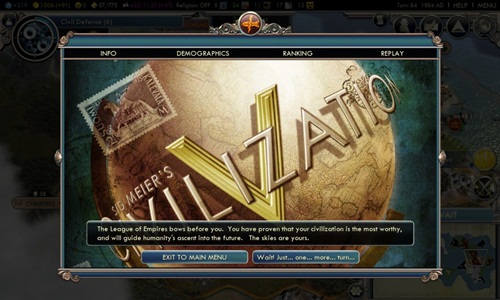 I really wasn’t expecting such a huge win on my part. I’m a big fan of the Civilization series, but I wouldn’t say I”m all that great at them. I figured playing on the default difficulty was the way to go since so much in this scenario is completely new.

I’d been hoping for more unit types, but because there was essentially just ironclads and airships, armies started feeling very similar. Still, it’s just a scenario and I think it’s cool that the developers tried to do something really different with this, even if it wasn’t the huge steampunk overhaul some people hoped it would be.

Honestly the biggest change seemed like the victory conditions. Requiring multiple titles to win forced me to diversify my empire more and that was an interesting change of pace. If you’re looking for a review of the scenario, I’ll say this and only this: don’t buy the Gods and Kings expansion just because of Empires of the Smoky Skies. Buy Gods and Kings because you’re excited about the new religions, or spies, or new civilizations to play as. Empires of the Smoky Skies is just a nice bonus.

With that, the Eruch Empire goes on to spread their brand of imperialist communism across the entire world. But the good news is people get to ride around on airships, so that’s pretty cool.

Join us next week for a new game and new journal at Campfire Gaming.