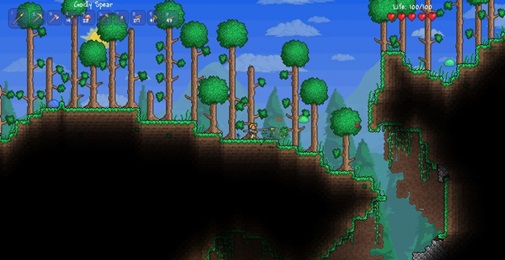 Welcome to Campfire Gaming. This week we have Terraria, an indie game that’s often called a 2-D Minecraft with an emphasis on combat. A couple of weeks ago I did a journal on The Story of Red Cloud, a mod for Terraria, but today we dive into the vanilla game with a twist. I’ll be playing on Hardcore mode, meaning if I die my character is erased.

Boris Ironbreaker isn’t like other video game characters. When Boris dies, he won’t respawn at the last save or checkpoint. When Boris dies, he’s dead. He has one life. When he loses it, the game will erase him forever. This is because I’m playing Terraria on Hardcore mode. The way I see it, this will be a success no matter what. If Boris lives a long time then that’ll be cool. If he slips and tumbles off a cliff, then we can all have a good laugh at my buffoonery.

This is the saga of Boris Ironbreaker. It’s a story of gold, large holes, and rabbits that inspire men to do wonderful things. This is Terraria on Hardcore mode!

Boris Ironbreaker has traveled far in search of gold and glory! Let me recount his many heroic deeds!

“All of nature shall soon bow, trembling before me!” Boris growls as he stumbles into the land of Terraria. He sees an evil green blob thing, and quickly sets to work on it with his copper short sword. “Gooey evil must die!” He dispatches it in short time, and as he wipes the green goo off the bottoms of his shoes he decides it’s time to gather wood to build a house. “I must murder some trees to craft a palace for a king!”

As the sun sets, he can smell evil in the air. He knows that something terrible will soon emerge from the darkness, so he heroically barricades himself in a hole in the ground. 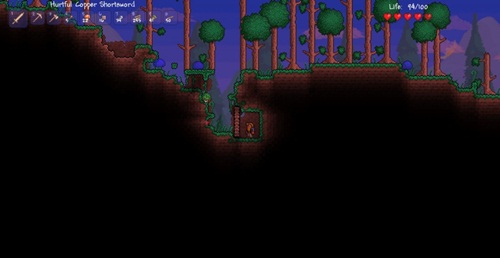 Boris is having a staring contest with a wooden post. He’s a lonely man.

“Foolish blobby thing! You cannot penetrate my underground fortress of doom!” Out of pure boredom, Boris clenches his pickax and sets metal to stone in search of adventure! He finds none, but he does have enough room to build a crafting table and furnace. From there, he builds a mighty broadsword. Now he’s ready to take on the night. But then he sees the zombies. 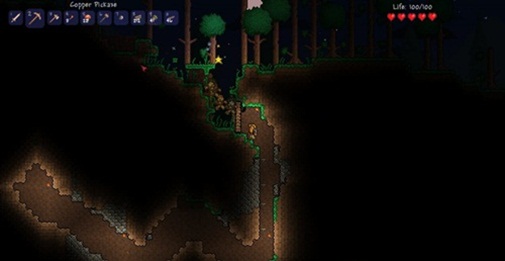 Lots of zombies. Boris heroically decides to wait until the sun comes up after all. Then he’ll take it to evil!

He finds a place high atop a mountain to build his house. With headquarters ready to go, he’s ready for his first adventure! “My palace for a king is complete, more triumphant than I ever could have imagined!” 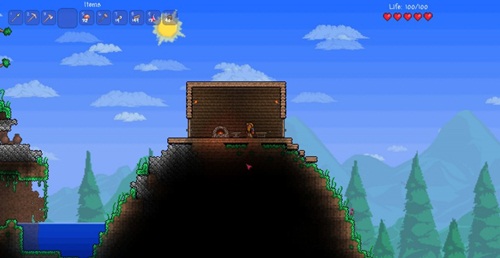 This story almost certainly ends with Boris plummeting down the steep cliff right by his house.

Upon spotting a cave near his house, he goes spelunking deep underground for treasure… and danger! 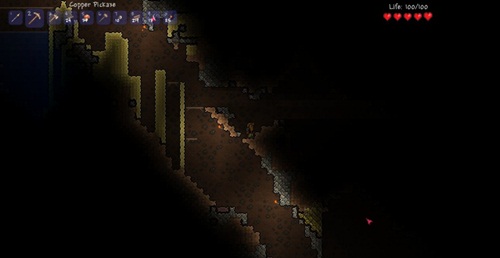 Because he only has a lance and no armor, he heroically avoids most monsters. He gathers copper and iron for better armor and equipment, and even finds some gold. When his pockets are bulging with assorted metals, he leaves the cave and returns home.

Throughout the night he sets to work on some new equipment. Leggings and helmet of bronze, chest plate of iron, and a sword made of solid gold. Non-hero types might argue that building a sword of solid gold is a stupid idea, but Boris understands that in video game land gold is always a good idea. Fully suited and with gaudy sword in hand, Boris is ready to test his metal. As usual, there’s a small army of zombies knocking on his door. But this time, he’s ready for them!

“Die smelly evil ones!” He opens the door and leaps into the crowd of zombies, sending body parts scattering in every direction. “In celebration of my triumphant victory, I shall add another level to my house! I shall add a basement to act as a forge! Oooo! Oooo! And some windows! And a couple lovely vases! And a cute balcony where I can relax after a hard day of monster killing.” 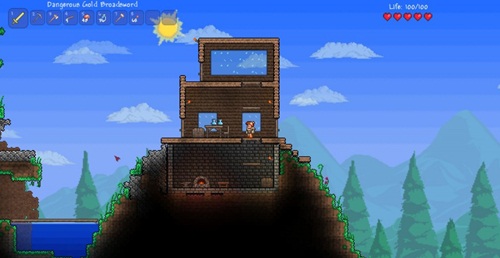 In his early days, Boris was an interior decorator.

As he walks down the mountain in search of more trees to kill, he stumbles upon a pair of rabbits. “Little bunnies!” Considering it to be a sign from the gods, he decides to found a village on this site. He starts building. 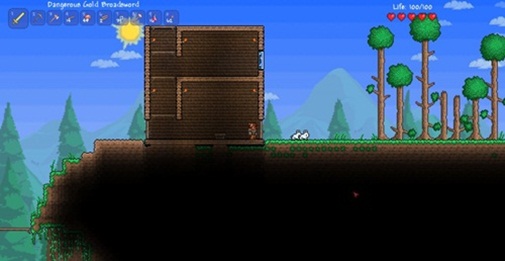 But evil is everywhere, and the rabbits pay the ultimate price! A blob leaps in and murders them both! Blood everywhere. “Oh, the horror!” Boris gets his revenge by plummeting his gold sword into the blob’s blobby flesh, but it’s too little too late. The Rabbits are dead.

The blob making its speedy getaway. What a mess.

“Damn you! Damn you all to hell! I vow to have my revenge on all evil-kind! Before I was only killing for glory! Now… now it’s personal.”

He’ll find whatever is causing these monsters and he’ll destroy them once and for all! But first, he’ll continue his town. That is, after all, what the rabbits would want.

And sure enough, people move in. He builds an inn that the guide moves into, and he builds a general store that a traveling merchant decides to call his home. 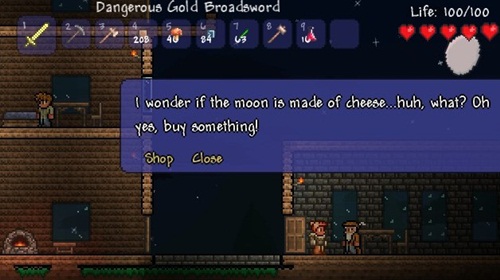 It’s been a while since Boris has talked to anyone, so he doesn’t realize what a bad conversationalist the merchant is.

A nurse moves into a hospital, and a demolition salesmen moves into an odd underground bunker. An actual town has formed. Boris has learned his lesson from the rabbits, and sets out to protect the townspeople immediately. He builds a wall and names the town in honor of his lost friends. 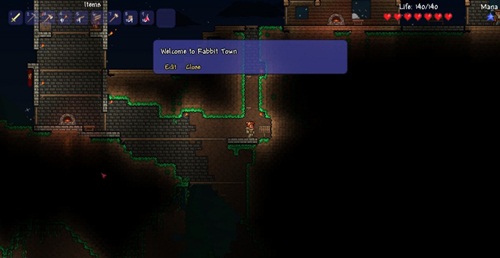 Boris and the rabbits is truly the love story of this generation.

There is a great feast to celebrate. The merchant ruins the joyful mood by mentioning Cthulu’s Eye, a giant floating eye that’s been terrorizing the countryside. 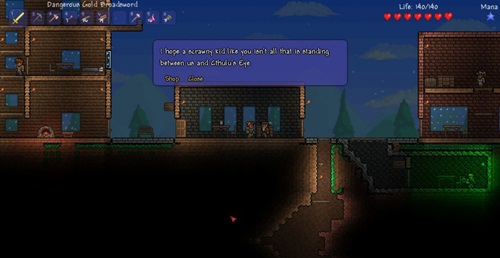 Boris is so filled with rage by the existence of the Eye that the ‘scrawny’ remark goes right over his head.

“This Eye is no doubt responsible for the senseless murder of my two bunny friends. The eye must die! Goodbye friends! Next time you see me I shall be bathing in the blood of wickedness!” He doesn’t really have any evidence that the Eye is behind all of this, but he won’t let that stop him.

After buying some grenades from the demolition salesmen, Boris travels underground to gather supplies for the final confrontation. He finds huge amounts of iron to complete his armor set. Most monsters fail to give him any trouble. He knows his victory on the Eye is assured. He tares his way through the caves, slaughtering everything in his path. This is a new Boris. A powerful Boris. He decides he’s ready to take on Cthulu’s Eye, and sets out to the surface for a final battle.

On his way up, he spots two skeletons trapped in a pit. Boris smiles and laughs. “Bony fools! You are trapped at my mercy, and I shall provide none!” Boris takes a grenade out of his pack. He hasn’t used one yet. They’re dangerous. But this should be a perfect opportunity to test one out.

“Boris is your god now!” he shouts as he pulls the pin.

Boris heroically tosses the grenade at the defenseless skeletons. It’s an awkward throw born of arrogance, and the grenade bounces back at Boris’ feet and explodes with a mighty blast. 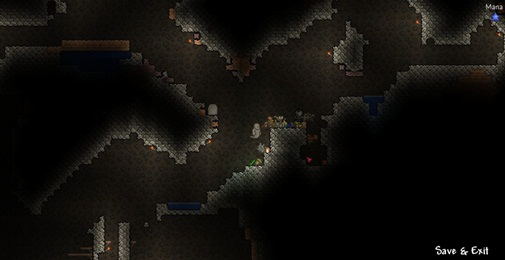 And Boris is dead. Oops! Boris is with his two rabbit friends now, hopefully in a happier place. Legend has it, on cold nights, when the air is still, if you venture into the caves and listen really carefully, you can still hear Boris whispering the words, “Epic fail”.

The game erased Boris forever, so he’s completely unusable, but the world is still intact. Perhaps I”ll return to Rabbit Town with a new hero someday, if for no reason than to prevent this from being the most awkward game journal of all time.

So that’s Boris’ saga. He was able to start a village, and he taught us all a valuable lesson about what not to do with a grenade. Then he died. In any case, this concludes the uncomfortably anticlimactic adventures of Boris Ironbreaker! He died for your entertainment, so don’t be too hard on him for his humiliating failure.