Though the game may have come out in time for the film back in August, the powers that be have only just granted me a review copy of Captain America: Super Soldier for 3DS. With my slightly less than favourable review of the Wii version of the game in mind, (which I’d recommend you check out here) I got to work on testing Captain America for 3DS. Though the game is identical to its Wii version I reviewed some time ago, it’s effective use of the 3DS’ technical prowess lifts it above the other version, if only slightly.

The game follows the plot of the film, with everyone’s favourite patriotically themed Captain fighting against the evil Red Skull army in a World War 2 setting. The game plays out in traditional third person action format, albeit with some automated platform sections and combat scenarios breaking up the monotony; or at least I assume that was the intended effect.

You spend the majority of the game traversing a series of rather linear levels. There are a few branching corridors that deviate from the set path to allow for collectibles and additional challenges, but they never really go any further than the odd distraction of destroying an object or negotiating some platforms. These all grant you experience points that can be invested into a variety of new skills for the Captain. Most of these relate to the combat which, whilst functional, becomes an increasingly tedious affair; new moves and all. If you’ve ever sampled the freeflow combat system of Batman Arkham Asylum/City then you’ll feel a real sense of Deja Vu with Super Soldier. The combat system is identical, with combos consisting of well timed single buttons attacks and counters, rather than a mind-numbing crescendo of button presses. It’s certainly enjoyable in small bursts, but it lacks the satisfying animations and smooth grace that bolstered the action in the recent Batman titles. Some stealth segments come in later that also serve to somewhat alter the proceedings but, whilst they are enjoyable enough, they don’t feature enough to really have the desired effect of diversifying the Captain America experience.

Though the production values of the console Captain America games failed to impress everyone and anyone, the 3DS version shares the same graphics as its Wii counterpart, making it fairly impressive. It won’t redefine the boundaries of realism, but the visuals are a feat as far as handheld consoles go, with full 3D worlds and a decent attention to detail when it comes to character models. The levels and textures look a little flat and samey, but the rest of it is handled well. My only issue was with the 3D effect not being particularly pleasing. It added a bit of depth, but lacked the “wow” that many other titles on the system have provided. The sound deserves some praise though for, though the sound effects may not pack much of a punch, most of the game’s dialogue is fully voiced, with many of the film’s actors voicing their respective characters. Say what you want about the gameplay, but Captain America: Super Soldier can’t be faulted on its authenticity. 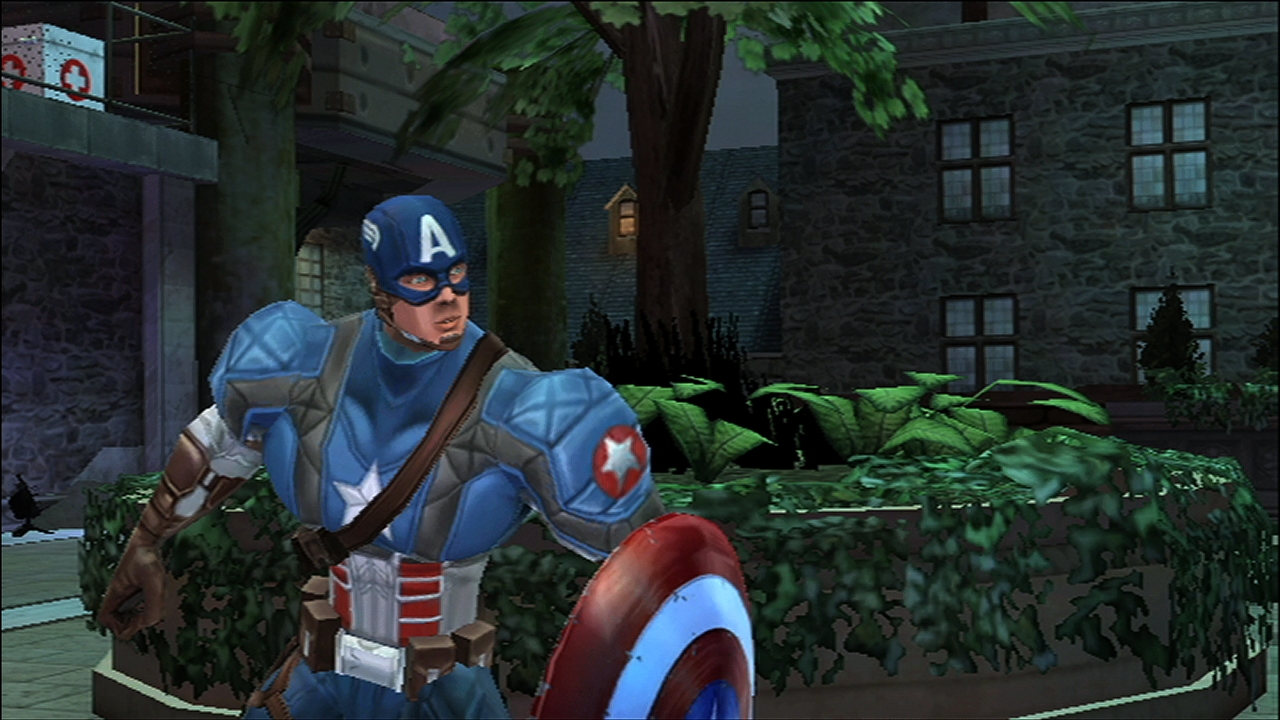 The graphics weren’t great on home consoles, but they use the power of the 3DS well

The big deal breaker that rears its ugly head is the game’s value for money. It doesn’t quite have the quality gameplay that would be needed to justify such a dismal quantity of game time. The main adventure is over fairly swiftly and, much like an unsatisfying lover, the extras and asides aren’t satisfying enough to excuse the early finish. On the other element of the scale we have some gameplay fat that could’ve done with some trimming, especially in regard to the controls. They are small flaws to call out but, when you have two buttons seemingly assigned to the same action and stodgy aiming, it makes you wonder how these control niggles weren’t ironed out during development. The touch screen never works too well when you need to switch to using it in the heat of the moment and, whilst it isn’t a deal breaker, having to use it to aim Cap’s shield is frustrating. It’s a shame too, as the shield deflection and throwing abilities are probably the two really unique and enjoyable elements of the whole game.

On any other format Captain America would be a laughable defamation of a classic super hero, but the 3DS version achieves a quality of presentation that is impressive for a handheld game. It’s a shame then that some uninspired gameplay design and a short campaign spoil it. If you’re a big fan of Captain America, then Super Soldier could offer you a fairly robust handheld experience. If you aren’t a fan of the movie, then don’t expect a game like this to change your mind.

Levels can get repetitive, Touch screen controls aren't always responsive, Not a huge amount of content, 3D effect doesn't add all that much

Final Verdict:
FAIR
Whilst console versions of the game lacked any real polish or interest, the portable version of Captain America: Super Soldier offers functional, if uninventive action gameplay that uses the power of the 3DS well
A copy of this game was provided by Developer/Publisher/Distributor/PR Agency for review purposes. Click here to know more about our Reviews Policy.