Posted By George Reith | On 07th, Aug. 2012 Under Reviews | Follow This Author @GNReith

As much as I hate to admit it, there seems to be a certain audience these days who want to play carnival games virtually. The idea of continuing to get swindled by bug-eyed carnies in the comfort of my own home doesn’t sit well at the best of times, but the continued success of such carnival games on Wii means there were bound to be imitations cropping up at some point. Staff from developer Magic Pixel Games’ previous work on Wii puzzle title Boom Blox shows in the game’s competent motion controls and visual aesthetic, but there isn’t enough fresh content to make Carnival Island a stand out title. 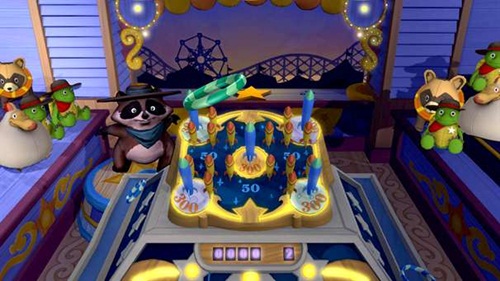 What, I suppose, resembles a story frames Carnival Island, as you take on the role of a nameless boy or girl as they attempt to restore the eponymous floating island of carnival to its former glory. Whilst the actual scenario is about as derivative as it gets, the way it is presented is surprisingly well handled. Cinematics take the form of anime-style FMVs that are gorgeous, and the in-game visuals keep a similar pace. Though technically a bit jagged at points, the graphical style is so bright and colourful that it’s almost impossible not enjoy it. Seeing the carnival/theme park spring to life around you is a delight and, whilst the carnival attendants can be as creepy as you’d expect, the various animal mascots that follow your progress are smile-inducing in their own way.

In order to restore Carnival Island to its full glory once more, players are tasked with completing a variety of traditional carnival games. Rather than offering medals based on scores as in other mini-game compilations, Carnival Island instead has a variety of distinctive challenges for each event, with various supporting animals being awakened for completing a certain number of them. The challenges themselves are interesting, ranging from anywhere between getting a set score to other extraneous feats of accuracy with your Move wand. They probably offer the biggest sense of challenge in Carnival Island, and make for a fun incentive in each game. It’s such a shame then that the animals you actually unlock for completing challenges feel largely superfluous. The designs for them are in keeping with the magic of Carnival Island, and the fun descriptions of the critters give them a sense of character, but they don’t really do anything. Likewise, the points you earn in the games grant you tickets you can spend on accessories for your character that, much like the animals, have no real bearing on your game outside of the purely cosmetic. More tangible rewards may have given Carnival Island’s single player mode more of a sense of direction. 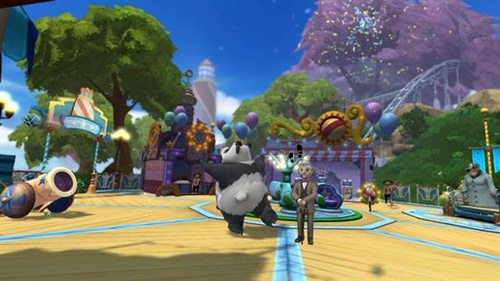 I don’t know about you, but I just want to explore the living hell out of this place.

The games themselves are competent. That’s probably the only real way to describe them as, whilst the Move controls work really well and offer a decent sense of weight for each event, the games themselves are lacking in variety and vision. Most are functional target style games that involve shooting targets, or throwing and guiding objects into point-tiered zones. Hoops and shooting ranges basically, as would be expected of a Carnival Game. Of these eight or so main games, each one has another three variants, but these are strikingly similar to their respective main game, often adding very little in the way of new or fresh mechanics to the proceedings. If this lack of variety weren’t enough, your only method of exploring the Island and its mini-game bounty is via a menu. A game world as colourful and vibrant as Carnival Island is just asking for the ability to actually explore the various elements of the carnival to break up the mini-games. Obviously this is a big ask for a game at the budget price point, but it does seem like a missed opportunity all the same.

The sheer lack of direction somewhat injures the lifespan of Carnival Island, but the multiplayer is more than enough to bring things up to speed in a title such as this. The turn-based style of gameplay means you can get everyone involved with a single Move wand, an absolute boon if you’re as stingy as myself when it comes to shelling out for peripherals. The ability to dish out mini-games at random for multiplayer matches also offers a needed element of chaos that can make this game a real hoot among friends. Add in a fairly fleshed out set of trophies, and you’ll find Carnival Island can offer an impressive amount of content for its budget price tag, provided you have some buddies to share it with. 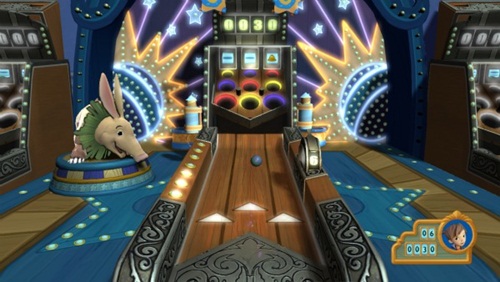 No matter how you dress it up, it’s just bowls.

Mini-game compilations are often the most depressing thing to arrive at my door, usually due to the poor quality held up by the genre. Carnival Island then pleased and upset me simultaneously for, whilst it is definitely a better quality title than a lot of the dross I’ve had to review over the years, it is also a missed opportunity in many ways. The games handle well and offer a novel multiplayer bonanza of silliness, but greater game variety and a proper adventure mode for single player could have really turned this into a must-have purchase.

A vibrant stab at the Carnival Games craze for PS Move, Carnival Island's colourful visuals and solid motion controls are somewhat let down by a lack of mini-game variety

A copy of this game was provided by developer/publisher for review purposes. Click here to know more about our Reviews Policy.
Tagged With: Carnival Island, Magic Pixel Games, ps move, ps3