The PS minis range has been distracting us with its little addictive slices of gaming since its inception in 2009. Without any real depth to the games though, the service has failed to garner any real killer apps that would have the populace glued to their PSP/PS3s indefinitely. Carnivores: Dinosaur Hunter is sadly unable to buck this trend but, what it lacks in raw execution, it heartily makes up for in ambition.

The game is, unsurprisingly, about hunting various breeds of dinosaur. There is no story involved, with the game instead just dumping you into a series of maps with a variety of weapons with which you must hunt a plethora of prehistoric lizards. It sounds simple and quick, but this belies the core of what Dinosaur Hunter really is.

The game is presented in first person shooter fashion, with players tasked at hunting and killing a specific type of dinosaur for points. More dangerous carnivores net higher points, and these earnings can be used to buy new maps and further upgrade your repertoire of dino slaying toys. Said weaponry offers a pleasing level of variety, but they all feel a little hollow. Without any particularly satisfying sound effects and weight to accompany each shot, it all feels a bit empty and unsatisfying; a feeling that would sadly dog my time with Carnivores: Dinosaur Hunter in general. 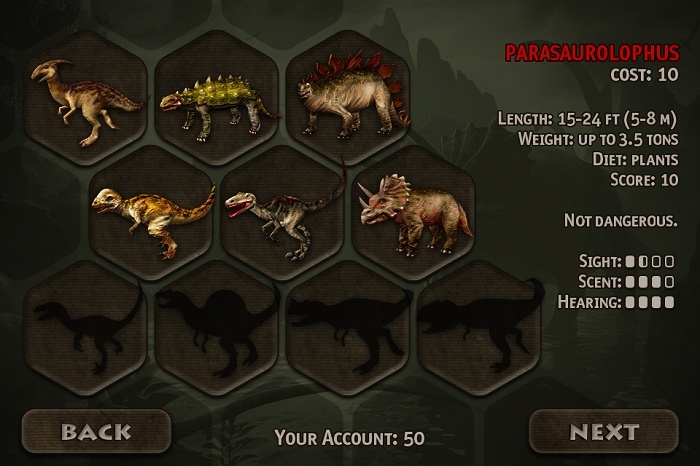 The upgrades give the game a pleasing depth, but going after them isn’t as addictive as you’d think

The general action of Dinosaur Hunter is pretty impressive. Having been used to little more than Tetris and Breakout clones ganging the Minis section of the Playstation Network, the open maps and 3D visuals of Dinosaur Hunter are a real step up. Whilst the scope of the graphics is a milestone for the platform, there is a serious issue of repetition that seeps into the game’s visuals and gameplay. From a graphical standpoint the maps, whilst numerous enough, all feel samey. The textures are flat throughout and, aside from the odd hill or pool of water, there is little geographical need to ever adapt your tactics in the game.

These same maps are a cause of the game’s pacing, which at times boarders on the excruciatingly slow. There just aren’t any definable elements that make the levels memorable or engaging, aside from many drops and hills. These don’t sound like such a big deal but, without a jump button, they become the constant bane of any players with a particular destination in mind. The lack of jumping is the first of a few control issues that felt niggling. The big one is the analogue stick issue. Being a FPS style game on PSP, Dinosaur Hunter maps the analogue nub to aiming with the face buttons used to move your character. I understand this was done to help with targeting sensitivity but, in an age where players are so used to using the right analogue stick to adjust aiming, this control method was a constant source of irritation. The option to aim with the face buttons would have greatly alleviated this problem, but regular console players used to dual stick controls will just have to be left out in the cold on this particular issue. The final killer to the game’s pace is speed. The movement speed of the game is slow. Too slow. Without a sprint feature or any kind of running pace, getting from A to B is a mind-numbing chore. There’s the option to relocate to different areas of the map but, without any kind of control over where you’re going, this is a poor excuse for the fast travel option this game so clearly needs. 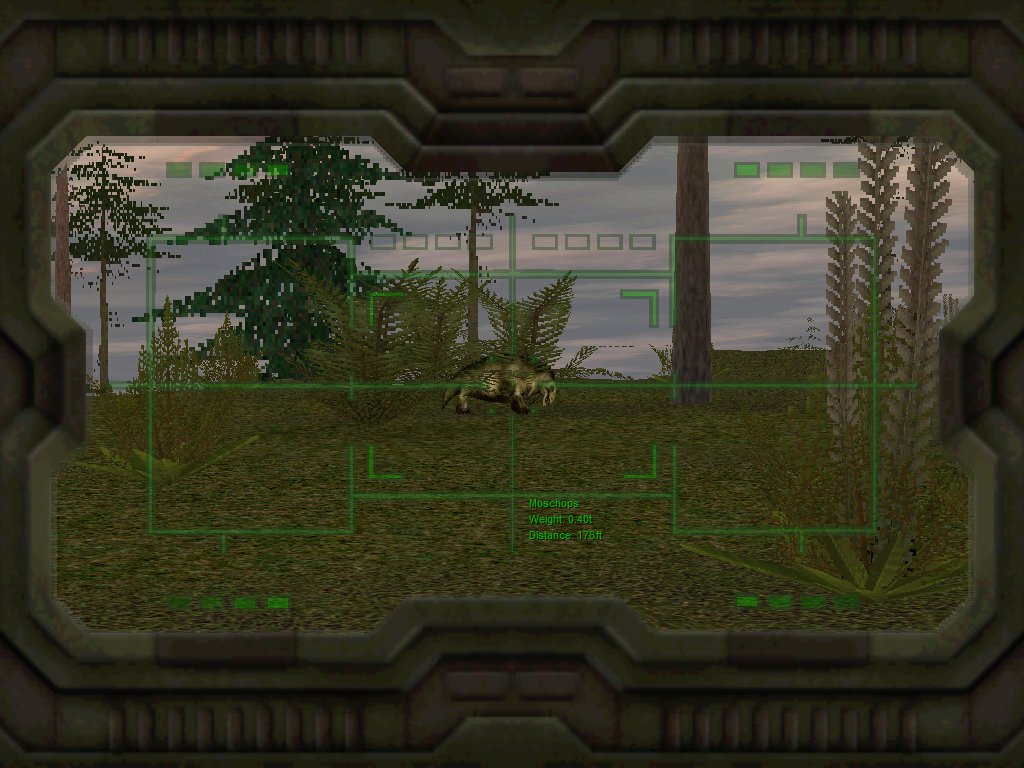 The scale of the game is ahead of the competition, and the dinosaur AI impressive

I’ve focused a lot on the negatives so far, but that’s not to say that Carnivores: Dinosaur Hunter is without positive qualities; quite the opposite in fact. The graphics have already been covered, but the sheer sense of scale is impressive for such a budget and portable title. Though the maps have their problems, they are big and expansive. Though there are pacing issues, the sheer feel of commandeering a decent hunting sim on the minis platform is pretty awesome. Not to mention the fact that the weapons, though lacking in weight and feel, offer enough variety within themselves to provide the game with a certain hidden depth. The dinosaur AI contributes to this particular element too, with your prey being able to track you with sight, sound and smell based on the direction of the wind.

There’s a lot of good to be had in Carnivores: Dinosaur Hunter, especially for the price. That said, there’s just a certain something lacking. You keep slaying dinos for points and then spending them on new equipment to help you slay more reptilian ancestors for yet more points. It’s just a shame that the game’s technical successes aren’t enough to free it from the cycle of repetition that it falls into. That said, if you are a fan of the series or want a really cool mini hunting sim to distract you from time to time, Dinosaur Hunter has few enough flaws for them to be overlooked.

Impressive visuals, Good sense of scale, A variety of weapons, dinosaurs and locations, Offers a hidden sense of depth

Final Verdict:
FAIR
A PS minis hunting sim with a prehistoric twist, Dinosaur Hunters is a technically impressive shooting distraction that is let down by poor pacing and a lack of player feedback
A copy of this game was provided by Developer/Publisher/Distributor/PR Agency for review purposes. Click here to know more about our Reviews Policy.