Chicken Riot is an on-rails shooter published by City Interactive, and is only available on the Nintendo Wii. The game supports one or two players in both story-mode and minigames. The player(s) control a farmer as he tries to reclaim his farm from endless waves of militant chickens. Minigames are unlockable dependent on performance in story- mode.

The game has two difficulty settings – Easy and Normal – and has the simple gameplay mechanic of all rail shooters: see thing on screen, point gun at screen, shoot thing on screen. The player progresses through each level shooting various types of enemy (all variants of chickens and roosters). Mid-way through each level sees a quasi-boss fight, where a new kind of enemy will be introduced through the medium of film cameos. These include the obligatory Matrix and Terminator references, as well as many others. For this reason – and the cartoon violence – the game seems to be paying tribute to Conker: the game which set the Gold Standard for the sheer amount of incredibly crude humour, graphic violence and prolific swearing which could be gotten away with by making the characters cartoon animals. 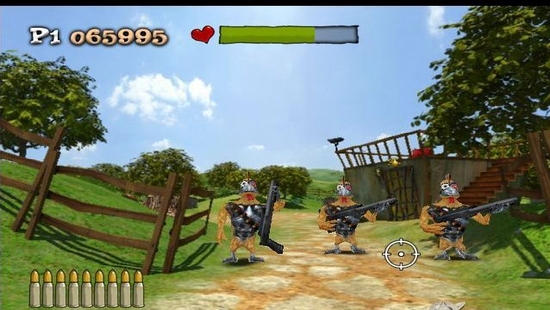 Sadly, Chicken Riot sets its sights on appealing to the Wii’s target demographic of casual and non-gamers by restricting its content to the 7+ rating. This is not to say that the game is childish, as a surprising amount of fine-control is needed to peg distant enemies and the fiddly-to-hit bonus items dotted around levels. The enemies come thick and fast, and some take more shots than others, so prioritising targets is a necessary skill. Annoyingly, the camera will pan through some areas even though you’ve already killed all the enemies there and shot all the bonus items. This could be to disguise loading times, but is usually short and infrequent, so this is questionable.

The game supports play with either the Wii Zapper peripheral or just the Wiimote, and has different controls to accomplish this. Sans zapper, B fires and A reloads. Alternatively, you can shake the controller to reload, but I found pressing A to be more useful during the thick-and-fast segments of the game, as it is quicker to perform. Using the zapper, B again fires, but the Z button on the nunchuk instead reloads, and players can dip the assemblage down and up again (á la Crisis Zone/Time Crisis) if so desired, for that ‘arcade’ feeling. Adding to the arcade feel are the pick-ups, including energy (health), shotgun and machinegun ammo (as opposed to the standard ‘handgun’) and items which award bonus points. The option to play each level/minigames in co-op is selected before the level starts, so drop-in/drop-out it is not. This detracts somewhat from the arcade feel, but not noticeably. 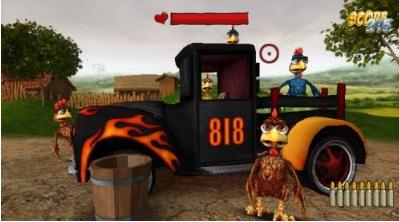 The hens are crafty foes, and will often hide in the most awkward of places.

The game is delightfully cel-shaded and has crisp, colourful graphics. The player’s health bar is at the top of the screen and the remaining ammo is in the bottom-left. That’s it as far as the HUD goes, and although the health bar can sometimes obscure enemies or projectiles, the game allows you to shoot ‘though’ it, so this is not a game-breaking feature as it otherwise might have been. Special enemy character models will have physical qualities from the film moments they are inspired by, and accompanying special effects. The plot (such as there is) is advanced by a series of one panel comics depicting the actions taken by the dastardly chickens, and the farmer’s efforts to combat them.

The protagonist is mute, as is often the case, but he lets his weapon do the talking for him. Weapon SFX are realistic-enough to satisfy any gamer. The voice-acting is limited to various squawks of rage from the foul fowl – sorry, I had to 😉 – you will encounter. Music is a range of suitably ‘country and western’ pieces, with harmonicas, guitars and banjo’s making you tap your foot in time to the shots. 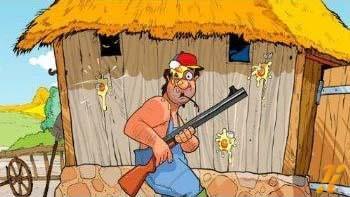 The one-panel comics advance the plot and show the plight of the farmer.

Chicken Riot surprised me by being both fun and playable despite its young content rating. It is definitely the sort of game you could wheel out at a party if the various WiiSports games and rip-offs are growing stale. It is engaging and entertaining yet simple enough that no player should feel out of their depth whatever their skill (or lack thereof) and should remain playable even after a good meal/drink. This title is recommended to Wii owners everywhere.

Fiddly bonus items, some slow segments, co-op is static rather than dynamic.

Final Verdict:
GOOD
If Conker’s Bad Fur Day was a rail shooter, and about chickens, and rated 7+ it might just be something like this.
A copy of this game was provided by Developer/Publisher/Distributor/PR Agency for review purposes. Click here to know more about our Reviews Policy.