A subliminal success in graphics, gameplay and story-telling.

In today’s gaming industry, a sense of wonderment and fantastical endearment is becoming harder and harder to convey. Games are getting bigger and bigger, their install sizes reflecting their inflated budgets and hyper-realistic, bleeding edge visuals. Even the vaunted Japanese RPGs of old are making way for more action-oriented trudges that want to be the next Skyrim when they’re actually settling for being a tacky Tales Of clone. What happened to the questing days of old, when even the slightest fetch quest felt like a journey? Where you had to go out of your way to find secrets, exploring levels and levelling up to take out the next beastie?

If you haven’t noticed yet, Ubisoft Montreal’s Child of Light has all of the things you could crave from both a modern platformer and JRPG – and no, it’s not just the nostalgia telling you the older days were better. 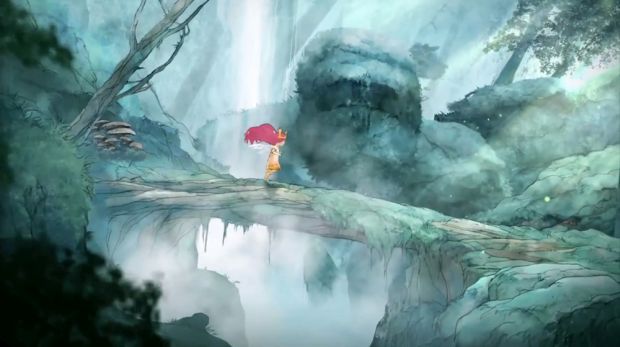 "Just when you thought the art style was becoming a bit tired with Rayman Legends, Child of Light comes along to prove that there’s nothing Ubisoft can’t accomplish within the quasi-animated realm."

You play as Aurora, a “princess” who contracts a disease that puts her to a coma-like sleep. While her father, the Duke, takes ill at the loss of his child, Aurora wakes up in the fantasia that is Lemuria. Defined by greenery and otherworldly beings, along with monsters born from the corruption seeping into the land, Lemuria is represented by beautiful water-colour paintings rendered with the UbiArt Framework engine. Just when you thought the art style was becoming a bit tired with Rayman Legends, Child of Light comes along to prove that there’s nothing Ubisoft can’t accomplish within the quasi-animated realm.

But as beautiful as the game’s palette of colours and rich character design appears, they pale in comparison to the starkly nuanced animation throughout. Aurora’s hair flows depending on the speed you’re running – and eventually, the direction you fly in. Storms cause her hair to frizz up while knock backs during battle knock the little crown from her head. Other characters are as lovingly animated in their own ways, which we’ll get to in a bit.

As the venerable Dorothy of Oz, the only way Aurora can possibly return home to prevent her father’s demise is if she somehow retrieves the celestial bodies from the Black Queen. Her quest will take across the various lands that make up Lemuria where she will encounter a firefly named Igniculus, a traveling circus performer named Rubella (defined by her inability to properly rhyme in time with other characters), a cowardly dwarf who wields powerful magic named Flinn, Aurora’s sister Norah who has been dragged into the fantasy world and inflicts her vain nature on the remaining cast and many more.

Norah’s white flowing locks and dress evoke the same aura of royalty as Aurora, while Rubella’s jester-like antics – including stretching out of the way of attacks – are only a few little details you’ll notice. Each character is intrinsically defined and for a game that relies on iambic pentameter to tell its story – yes, everyone rhymes – Child of Light masterfully conveys a deep sense of character and story progression. What could start out as a majestic bedtime story transitions into an epic tale befitting the ancient odes of yore. 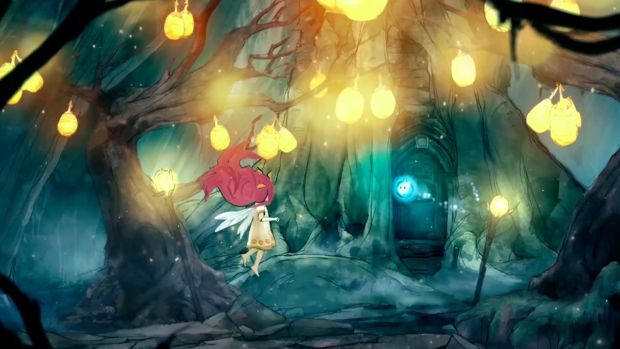 "The combat system borrows from the mechanics of the Grandia series. The activity bar is divided into two segments – the waiting phase and the casting phase. Depending on your speed and status effects, you’ll move either slower or faster than your enemies."

Traversing Lemuria is as much a joy as witnessing it. You’ll come across several simple puzzles to solve, many of them with the help of Igniculus as he reflects light from crystals and monuments to open the way forward. You can also ruffle certain plants to collect “Wishes” – simply follow the lighted row of icons with the mouse and you’ll restore you HP/MP accordingly. Igniculus can also act as a source of healing for Aurora – holding left click causes him to light up and this can also be used to blind enemies for sneak attacks in combat.

The combat system borrows from the mechanics of the Grandia series. The activity bar is divided into two segments – the waiting phase and the casting phase. Depending on your speed and status effects, you’ll move either slower or faster than your enemies. In the casting phase, you’ll have a set amount of time to execute your spells and attacks. The kicker is that if you attack an enemy when it’s in the casting phase, you can interrupt it and return it to the waiting phase. Attacks can thus be chained together to keep enemies from even laying a hand on you. In another twist, Igniculus can be used in combat to blind enemies, causing them to slow down in both phases. He can also heal characters and uncover Wishes to heal MP and HP.

Child of Light makes use of a basic elemental and equipment system. You’ll discover different Oculi, which can be equipped to your weapon, armour or boots to confer different effects. You can use a flaming sword against wooden enemies, grant elemental resistance against watery foes, increase your chances of dodging or even increasing your maximum health, and much more. Oculi can be fused together for stronger effects and bonuses, and knowing the right elements to defeat enemies with is tantamount to surviving in Child of Light. The litany of enemies inherent in the game range from gruesome woodland creatures to three headed underground Hydras. Even on the Normal difficulty, you’ll have your work cut out for you in fights if you’re not paying attention.

Luckily, there are plenty of items and abilities to help you out. Rubella functions primarily as a healer in combat while Nora works to protect you from status effects while paralyzing foes. Finn is good for spell casting and is a real trump card in battles with varying elemental creatures since he has spells for each element. Aurora is no slouch either – her light-based attacks are capable of annihilating foes wholesale. 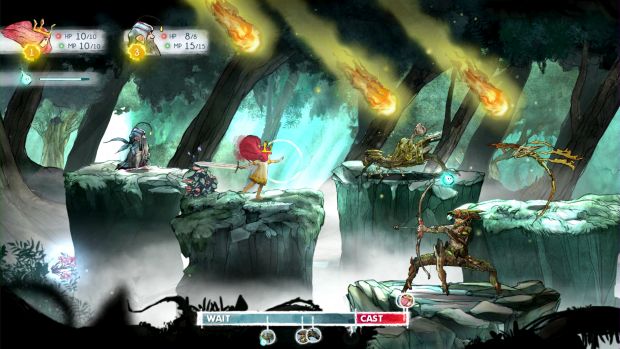 "It’s a colourful, engrossing adventure that keeps you invested in its characters and story, waiting to see what happens next while still being able to kick back and enjoy the ride."

There simply isn’t enough to be said about Child of Light’s environmental design. Lemuria is simply spell-binding and as if challenging itself to deliver on the game’s name sake, light plays more than just an artistic role in the proceedings. Several areas will be caked in darkness until you hover Igniculus over them. Some areas are engulfed in fog, while forests see little slivers of light rays peeking through the canopy. It’s all so subtle and yet so detailed that you’ll find yourself simply stopping and admiring the beauty before you.

If there any criticisms to be made against Child of Light, it could be that there isn’t much reply value. Beyond the main quest, side quests and collecting various confessions, there isn’t much reason to return to the game other than the harder difficulty and co-op. That being said, Ubisoft delivers a significantly strong campaign throughout. It’ll take you more than a few hours to see and hear everything that Lemuria has to offer. Some may find the Normal difficulty to err on the side of “Easy” most times, but for casual users, it’s the perfect blend of adventuring and high stakes battles.

Child of Light won’t revolutionize the industry or cause you to reconsider your taste in games. It’s a colourful, engrossing adventure that keeps you invested in its characters and story, waiting to see what happens next while still being able to kick back and enjoy the ride. Action platformer, puzzle solver or JRPG tribute – Child of Light is an expert in its numerous roles and masterful as an endearing whole.

Normal difficulty may be too easy for some. Not much replay value.

Child of Light is everything you ever ask for in an RPG platformer and oh so much more. Whether it appeals to you or not, you owe it to yourself to visit Lemuria.

A copy of this game was provided by developer/publisher for review purposes. Click here to know more about our Reviews Policy.
Tagged With: child of light, pc, ps3, ps4, Ubisoft, ubisoft montreal, xbox 360, Xbox One