I don’t deal well with simplicity. I grew up in a time when games had a million and one stats to track for no apparent reason and instruction manuals were bold and imposing tomes. It wasn’t necessarily a good time for gaming, but it’s one I’m used to. The modern age of game design has seen a paring back.

This reduction in game mechanics has led to some truly refined titles, but it has also been regularly abused as an excuse for dull designs. Cloudberry Kingdom initially appears to be too simple for its own good, but a hefty roster of cool powers and some of the best procedurally generated levels ever won me over in a big way. I’m sure, given enough time, it will win you over too. 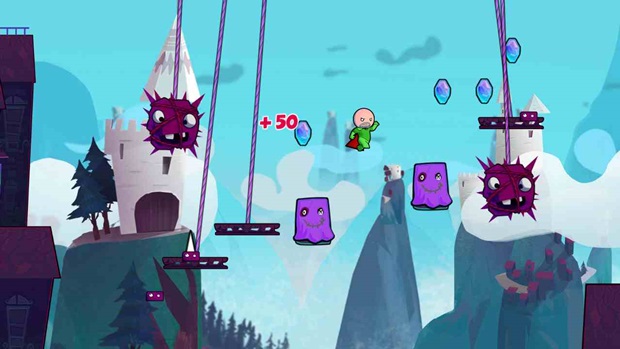 Cloudberry offers one of the most simplistic controls schemes ever, with movement and jump keys being all that is required. Platforming is of the classic 2D mold, with a variety of traps, monsters and collectable gems standing between you and a convenient exit placed on the right side of each map. It doesn’t try to be any more than a Mario clone, but the handling is executed with a panache that bests even the most heavily canonised of 2D platformers. The weight feels solid, jumping feels precise and the whole game has a sense of pace that leads to hours of you “just having one more go.”

"If Cloudberry Kingdom was just a decent platformer with fun powers, we could slap a nice seven out of ten on it and get on with the day."

A story mode is offered as a gentle introduction to Cloudberry, but it is here that the game is at its least interesting. It tells a painfully sedentary tale of a washed up superhero questing for a princess and, though a thinly veiled attempt at humour is present, it never feels like anything more than a missed opportunity. Lame story aside, the campaign provides a series of increasingly difficult stages to sink your teeth into. They aren’t especially inspired and, were it not for the regularly introduced powers, you would get bored very quickly.

I suppose the same could be said of the rest of the game, as the powers really add a new layer to the proceedings. Genre staples like rocket packs and double jumps are woven into more creative efforts that totally turn the game on its head. I won’t go into detail for fear of spoiling the surprise, but there’s always something fresh to look forward to in Cloudberry Kingdom. 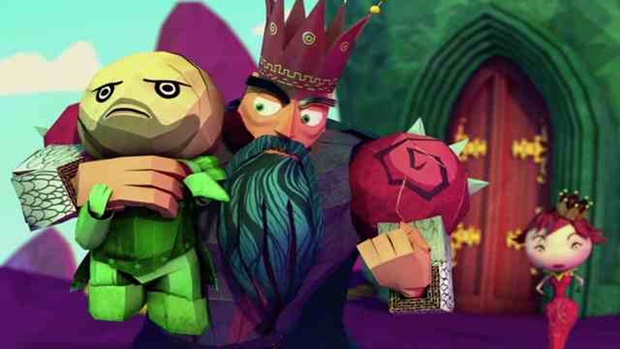 If Cloudberry Kingdom was just a decent platformer with fun powers, we could slap a nice seven out of ten on it and get on with the day. It’s not that simple though, as randomly generated levels enter the fray. Platformers with procedurally generated stages have never been done that well, often acting as interesting tech demos rather than fun games.

"Arcade mode is where the real meat of Cloudberry Kingdom is, giving you the chance to clear an infinite string of increasingly complex stages for high scores, satisfaction and, ultimately, glory."

Cloudberry Kingdom finds the holy grail with its algorithms, creating stages that offer a perfect mixture of challenge and enjoyment. Even more surprising is how well they respond to new stimuli, offering a decent difficulty curve whilst accommodating the introduction of new power ups. It introduces a few arbitrary level elements that somewhat spoil the illusion of randomly created perfection, but it is a mighty achievement all the same.

Arcade mode is where the real meat of Cloudberry Kingdom is, giving you the chance to clear an infinite string of increasingly complex stages for high scores, satisfaction and, ultimately, glory. The normal mode gives you a set number of lives to continue with that you can bolster by collecting enough crystals in each stage.

A time attack mode offers an imposing time limit to work around, with hero mode doing much of the same but varying what power you have periodically. Hybrid Rush is the wackiest by far, affecting your character with multiple powers simultaneously. 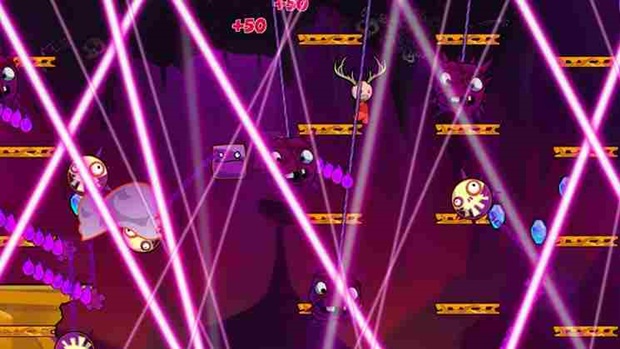 There’s also a free play mode where you can create your own individual levels by setting difficulty, powers and how much of each block and hazard should be present in the stage. It’s a great way to get to some of the hardest content quickly, with Cloudberry’s hardcore difficulty offering a thumb-bleedingly hefty test of skill.

"In terms of raw gameplay, Cloudberry Kingdom is a new powerhouse within the 2D platforming genre."

If you happen upon a level you’re really fond of in any of the modes, you can save it to play through here later. You can also share saved levels with your friends. All modes offer up to four player local multiplayer, but it is a fairly irrelevant addition. There is a certain draw to having your friends in the same game together, but there are no ways for players to interact with each other, making the mode feel like little more than a last minute inclusion. It isn’t bad per se, but it makes the action on-screen far more cluttered than is necessary.

In terms of raw gameplay, Cloudberry Kingdom is a new powerhouse within the 2D platforming genre. Looks aren’t its strong point though, with paper cut-out visuals looking like a basic Flash game, and not in a good way.

They do the job, but more complex sprites or a more creative visual style would have made a big difference. The music is actually rather interesting, with a heavier sound that rather complements some of the more intense levels. Still, you’d be a fool to judge Cloudberry Kingdom on looks alone. 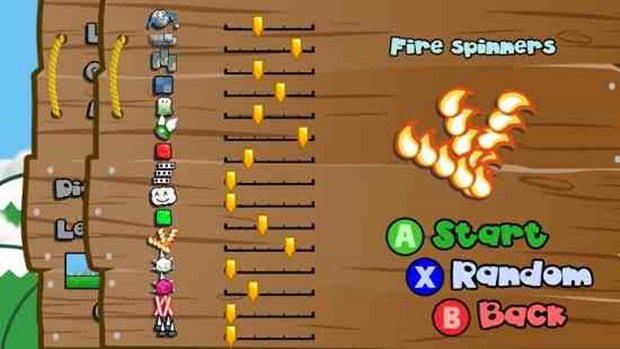 A generic name and limited aesthetic may cause you to ignore Cloudberry Kingdom, but you do so at your own peril. It’s a master-class in classic platforming, managing to create an algorithm for level creation that offers seemingly limitless content. The simplicity will draw you in, but the satisfaction of a job well done will keep you coming back to one of the more surprising titles of 2013.

A well-honed and refreshing platformer, even lame presentation is not enough to slow down Cloudberry's awesome gameplay and randomly generated levels.