Compound Fracture Is Looking Like A Great Throwback To The 1990s

Iteria Games' upcoming Compound Fracture is a game that's both a nostalgia to the medium's glorious past while being its own thing with its original ideas.

It’s no surprise that dinosaurs are at the epicenter of so many works of fiction spanning different mediums. Video games in particular have made excellent use of this subject material, and fans have experienced great games featuring these ferocious creatures such as Turok and Dino Crisis among a slew of others.

But much like these creatures, prominent games featuring dinosaurs seems to have become a thing of the past in the current day and age. Sure, there have been some recent releases like Jurassic World Evolution, but they are so few and far between. Thankfully though, indie and AA developers are working hard to fulfill the needs and demands of fans with games based around this very concept – and one such upcoming game is Compound Fracture. With its retro aesthetic and action-packed gameplay, Compound Fracture is looking to be a game that’s going to be worth looking out for. With that said, let’s dive deep into the world of this game and dissect its many aspects one by one. 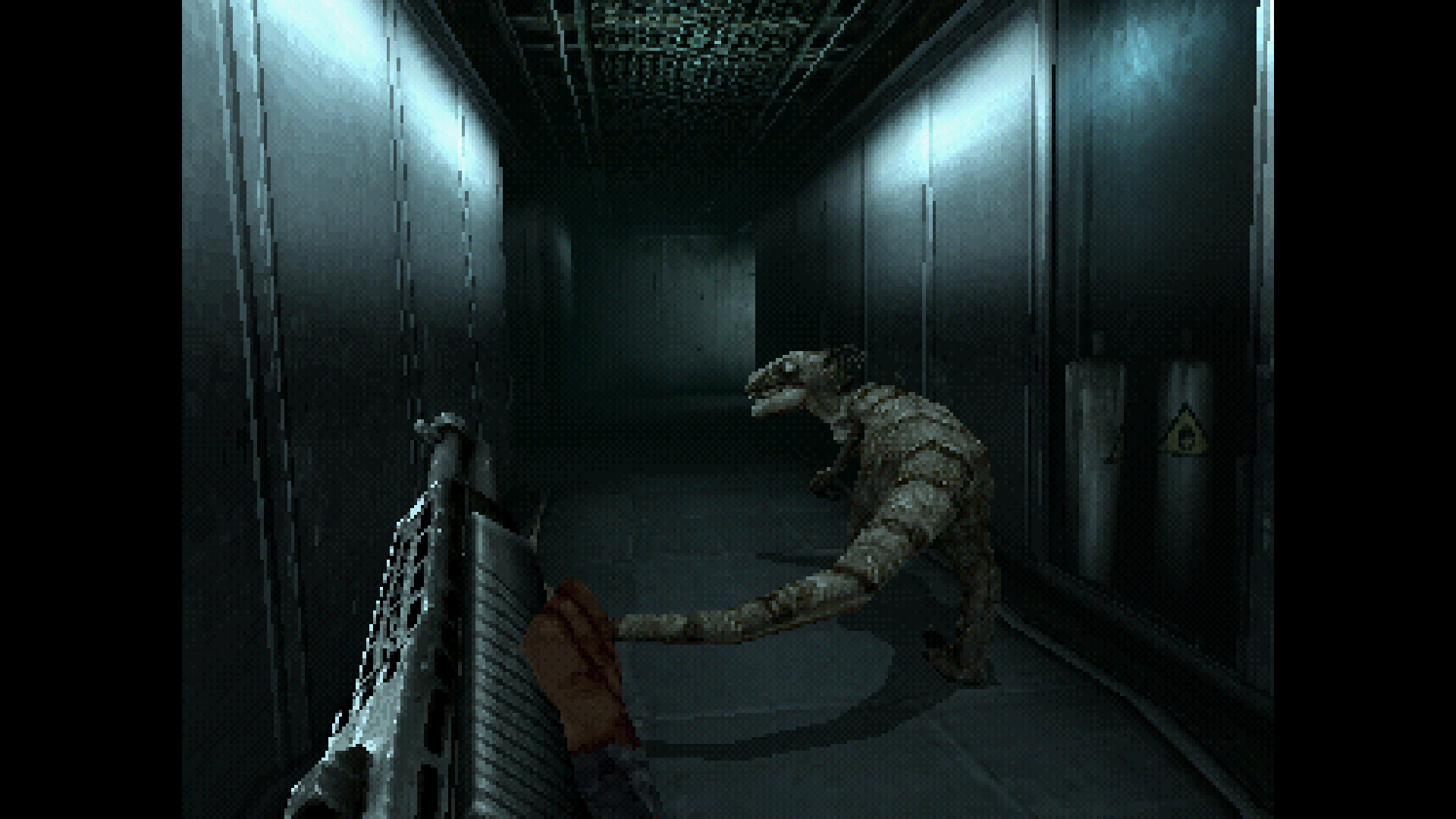 The game itself is set against the backdrop of a retro-futuristic 1996, and sees the player character embark on a dangerous journey through a dimly-lit facility. You see, an organization has violated some rules and regulations surrounding the use of time-travel in an alternate history 1996. In response to these violations, the OSEA has sent an enforcer officer to investigate the matter. As the enforcer himself, players will be thrust into a narrative that takes them through the dimly-lit corridors and alleyways of the factory as they work to contain the threats that this organization has unleashed upon mankind. The story seems to have been built upon an interesting premise with due efforts paid to world-building, which is astonishing considering that this is just a three-man project at its core.

Over on the gameplay front, Compound Fracture’s moment-to-moment gameplay will entail exploring this abandoned facility and dealing with the many threats that lurk within its dark corners. The game certainly seems to lean towards action, but there are elements of survival horror that are neatly brought into the fold. So while players will obviously have to fire a ton of bullets and explosives to take down these ferocious prehistoric beasts, they would also have to do it in dimly lit and at times, claustrophobic environments with little leeway for movement and dodging. A short gameplay snippet showcases the player character making his way through the facility while marking the path with flares as they go deeper into the facility, which has us excited at how exploration would be implemented in the final release.

Compound Fracture will most likely feature mandatory enemy encounters, but players will also have the option to bypass some of these encounters if they are running low on supplies or just want to take the easy way out. The developers claim that the latter of these options might be the wiser choice of the two at times, since not every fight will be worth taking. This is a neat twist on the tried-and-tested formula of action games, and we’d really like to see how it works out with the other design aspects of the experience. 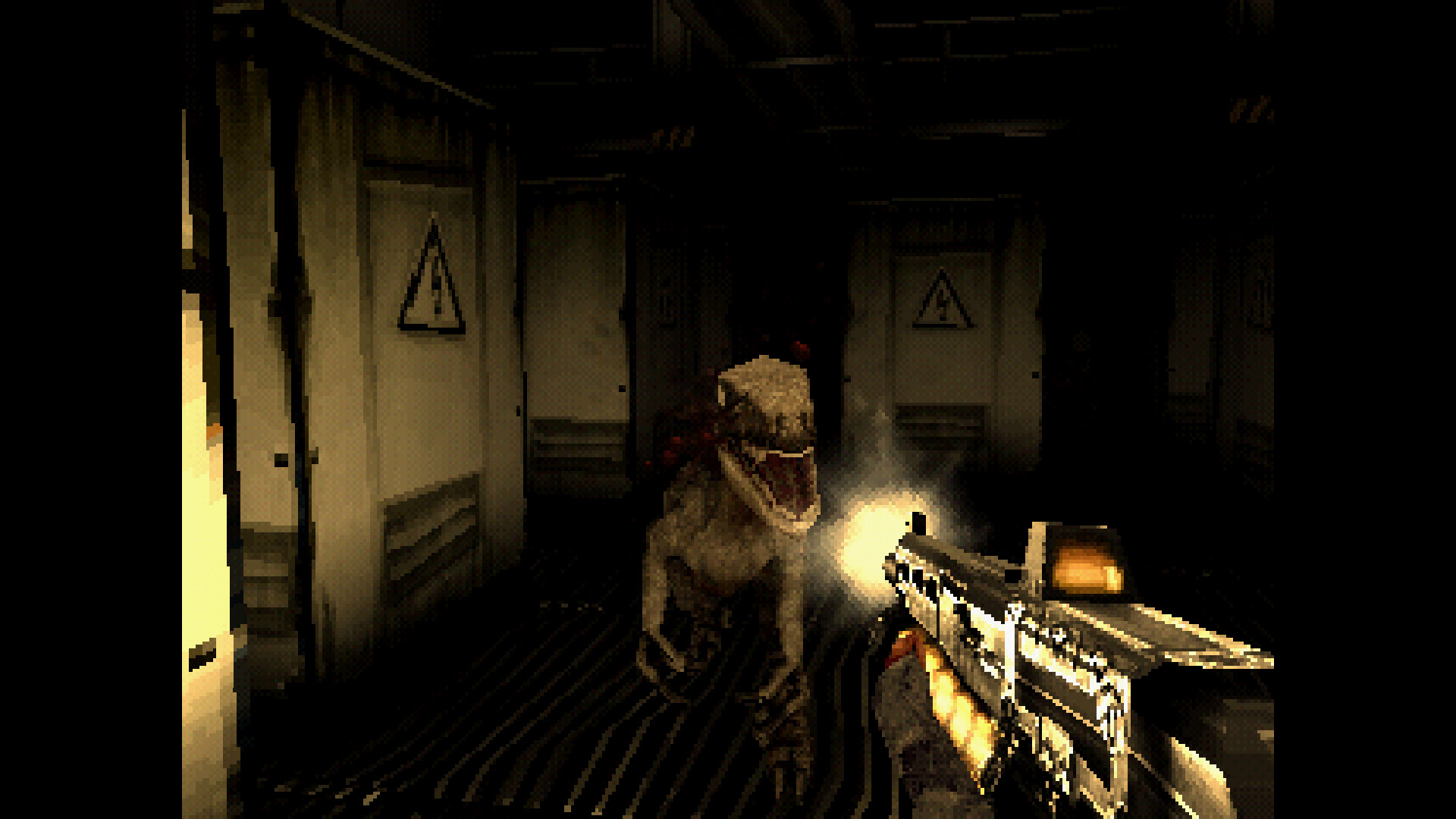 And of course, dinosaurs are going to play a big part in gameplay as well – with Compound Fracture featuring different species each with their strengths and weaknesses. While we only saw raptors in the trailer, we are sure that more enemy types will be unveiled with the next showing of the game. Apart from just pumping them with red hot lead, players can try some creative ways of dispatching these beasts like shooting off exposed steam pipes to stop them in their tracks. Our enforcer character is obviously going to be really proficient with weapons, and will have the ability to wield weapons ranging from a simple pistol to an assault rifle to shotguns and many more.

The levels themselves will be sprawling and varied, and will most likely feature multiple side paths and optional areas that will shower players with additional supplies and loot. Uncovering these areas would require collecting bits and pieces of maps and documents, which might help in finding new and hopefully, safer ways of reaching your objective. And once you are done with the campaign, you will also have the option of hopping back thanks to an Enforcer mode – which will add some new twists to the mix – which should help make Compound Fracture a highly replayable experience.

While all these are impressive aspects of the experience on their own, undoubtedly the biggest drawing factor in the case of Compound Fracture is the incredibly stylized visuals. The developers have nailed the look of a PS1-era game, complete with elements like polygon jittering which directly stemmed from the original hardware’s shortcomings. It looks like a nostalgia trip through and through, but the developers are adding some well-needed options such as sliders for FoV and adjustments for modern resolutions alongside toggles for visual elements like the aforementioned polygon jittering and texture warping. All in all, you will have plenty of headroom to customize the experience and find the perfect balance between nostalgia and modern sensibilities. 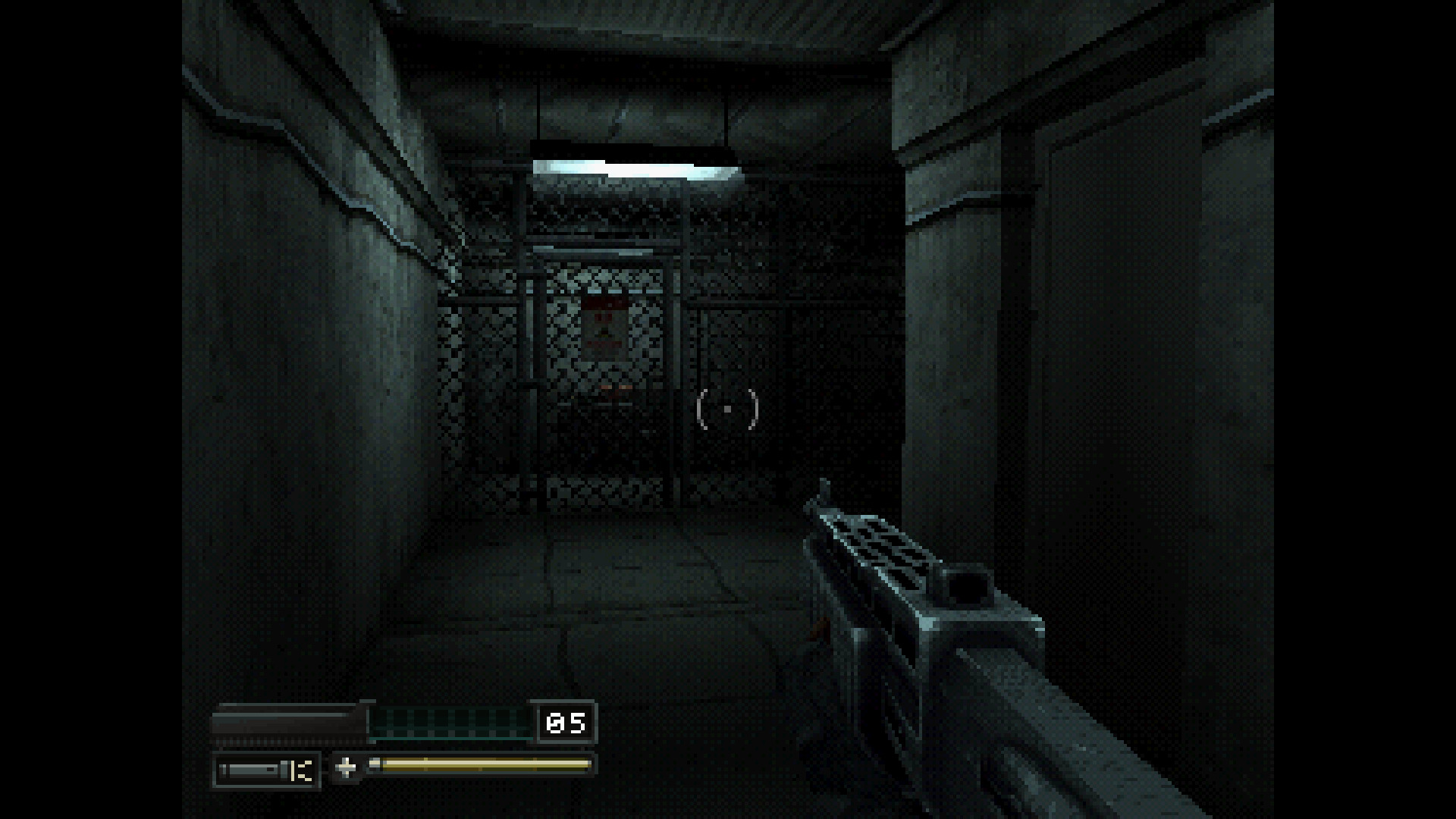 Last but not the least, there’s the topic of release. Compound Fracture is being self-published by Iteria Games, and the game seems to be entirely funded through Patreon memberships. The game will be released for PC through Steam, but no release dates have been announced as of yet. But considering the current state of the project and the resources available for the same, it seems like a fair guess that the game wouldn’t be out until at least next year.

But of course, delays are pretty frequent in such indie projects – so it’s best to keep expectations in check. As for console releases, the developer might end up porting the game over to Switch if it garners enough critical and commercial games. And we say Switch specifically because indie titles such as these tend to do well on the platform, but it’s just a guess at the end of the day so fans shouldn’t bank on these expectations just for now. To conclude, Compound Fracture is an interesting game with a lot of potential, and considering the sparse number of competitors in this specific niche at the moment – the game could end up becoming huge if it delivers on most if not all of its lofty promises. Here’s hoping it does exactly that, and then some more.