Contra – What The Hell Happened To It?

You wouldn’t be able to tell now, but in the past, Contra was one of Konami’s flagship franchises. While there are many franchises known for a punishing sense of difficulty, Contra specifically is about a classic and precise style of gameplay, though it takes different forms forms. Aiming and character control have to be on-point.

In Contra games, you play as a soldier, progressing through waves of enemies that approach you from varying angles, all the while keeping cognizant of hazards and using precise character control. Contra games express all of the tension of a carefully-advancing guerrilla unit, through the difficulty of design. You are not a superhuman, or a robot. Though in some games, you can do cool somersaults, and duck or shoot while ducking to more safely place fire on screen, or spin around…

Movement in early Contra games is restricted, which places more demand on the need to be precise and cautious with timing jumps and progressing forward. Basically, your firearm is your offense and your defense. However, players can pick up different weapons to use, in the form of item drops found in levels. These are typically much more powerful than your default gun, with their primary benefit coming from the greater reach or speed that the weapons enable. And thankfully, you can aim your weapon in multiple angles, and shoot while in the air. 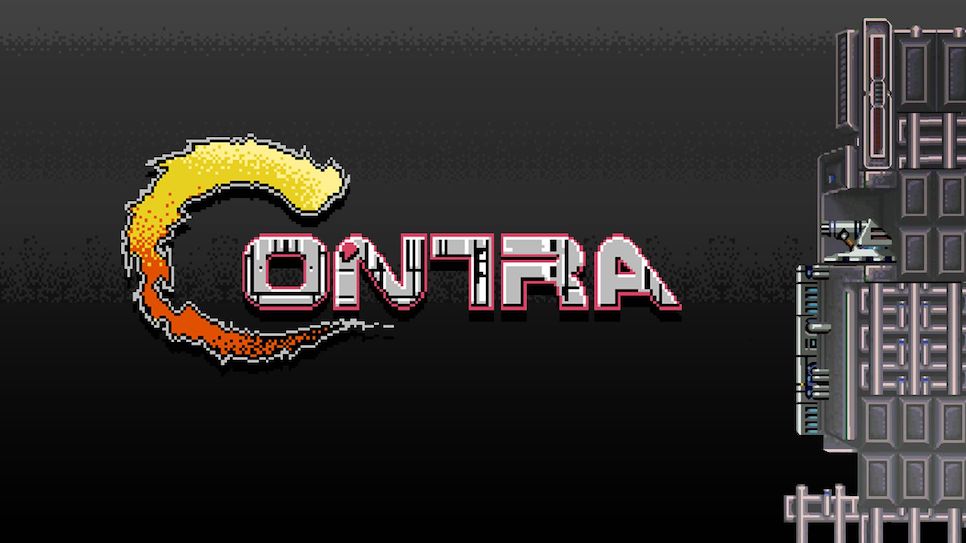 The first Contra game dates all the way back to the arcades, and was later released on Nintendo Entertainment System. When people might hear of “Nintendo difficulty”, Contra certainly lives up to and perpetuates that reputation. Players progress through varying gameplay display perspectives –  2D with multiple elevations, and dungeon-crawler-style – to clear stages. Don’t forget that you’re sometimes racing against a time limit in some stages, lest you lose a life. The earliest Contra games were designed around an arcade-style sensibility particularly popular during the late 80’s, wherein you had as many chances as you had coins to allow you to retry from your game over point. Contra also has the distinction of being a co-op game, one of the earliest games of its kind as a scrolling shooter, and later Konami games such as the licensed beat-em-ups they developed for the Super Nintendo were arcade-style co-operative games as well.

The second Contra game, Super Contra, followed a similar format of being first released for the arcades before being ported to the NES and other platforms. It introduces a stage designed around a top-down perspective, but is also shorter than the first game’s seven stages. The sequel did not arrive without new gameplay ideas though – weapons can now be upgraded by picking up the same weapon upgrade twice, stages now include slanted surfaces for varied and challenging level design, and jump height can now be adjusted by holding up or down after leaving the ground. Contra III: The Alien Wars, the third mainline Contra game, was released on the Super Nintendo years later. It introduced climbing on walls, ladders, and ceilings, and attaching to poles. Additionally, players can switch between two weapons at any time, though both are lost if the player character dies. Some in-game sequences made use of the SNES’s Mode 7 graphical depth impression generator for stages and for boss fights. There are also three difficulty modes to choose from as well, with a true ending only available by clearing the final boss on the most difficult setting. Arguably one of the most lauded of the Contra games, it was eventually ported to the Game Boy and Game Boy Advance, and re-released on the Wii Virtual Console and the SNES Classic.

Strangely enough, despite the franchise’s jump to the next generation of consoles, there was one Contra game, Contra Force, developed for and released only on the NES, and radically different in some ways from previous games. Players could choose between four different characters, each of which have gameplay distinctions such as movement speed and weapon choices. Contra Force possesses the wall and ceiling traversal found in Contra III: The Alien Wars. Interestingly, it was never intended to be a Contra game, but rather its own entity called “Ark Hound” – which may explain why the game released even though there was a Contra title already on the SNES. “Ark Hound” was developed in-house by Konami in Japan, but “Contra Force” ended up only being released in America.

Contra: Hard Corps would be the series’ sole entry on the SEGA Genesis, bringing with it some interesting gameplay directorial decisions. Choosing between different playable characters would return, but the shifting view perspectives – a mainstay since the franchise’s beginning – was no longer, with players progressing solely through horizontally side-scrolling stages, though sometimes hoverbike sequences were present. New features included descending through platforms, which is especially helpful if all stages are side-scrollers, an invincible slide, and branching paths wherein the stage players will progress through next will depend on questions that the game sometimes prompts them with. 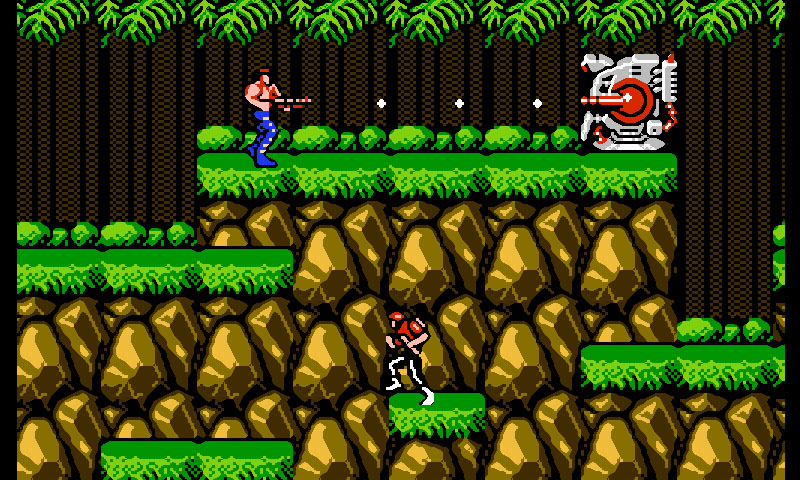 Following Contra: Hard Corps, the next games would all see release on Sony platforms, with the exception of Contra: Legacy of War also being released for the SEGA Saturn. Legacy of War and the next Contra game, C The Contra Adventure, were both developed outside of Konami by the now-defunct Appaloosa Interactive, which you might have heard of if you are a fan of Ecco The Dolphin. These two games represented an attempt at shifting the games to 3D, en vogue with the generation of gaming consoles at the time as console power scaled upwards, but also represented some new directorial decisions. Legacy of War decreased character individuality increasingly introduced in previous games, but also employs a health meter, and introduces saving game progress. C The Contra Adventure did away with the co-op option present in the mainline releases thus far, oddly enough. Otherwise, the two games share a good majority of design choices. The move to 3D allowed Appaloosa to introduce new movement and environmental interaction options, such as strafing. It is worth noting that neither of the two games were released in Japan, and C The Contra Adventure was released only in North America.

After these releases, Contra also made the jump to the PlayStation 2, but with two very different game design visions. Contra: Shattered Soldier, releasing on the PlayStation 2, saw Contra game development return in-house to Konami, and also saw the return of 2D side-scrolling gameplay though with the introduction of 3D polygonal rendering. Shattered Soldier also utilized charge shots and introduced grading per stages. There are no power-ups; instead players switch between one of three weapons. And, the game features multiple endings based on stage performance grading rather than choices made throughout gameplay in response to dialogue prompts. Neo Contra, also releasing on the PlayStation 2, sees the return of stage progression perspective variety, alternating between horizontal side scrolling, dungeon-crawler-view, and isometric view. However, Neo Contra differs from Shattered Soldier in its weapon loadout customization and the introduction of dashing for quick bursts of speed and spinning in place for a brief moment of invincibility, both as a substitute for jumping. Neo Contra also retains the stage performance grading system introduced in Shattered Soldier.

The following generation saw the release of Hard Corps: Uprising, developed by Arc System Works of BlazBlue and Guilty Gear fame (and with art and music composition credits from Daisuke Ishiwatari of Guilty Gear) was a digital-download title released for the Xbox 360 and the PlayStation 3. It featured an aesthetic that took notes from anime, and was positioned as both a prequel to the original Contra game and as a start of its own continuity. Hard Corps: Uprising utilized a health bar and a points system that could be used to purchase upgrades. Contra: ReBirth, a WiiWare title,  was developed by M2 and for the most part skewed to the gameplay formula established by Contra III while allowing for players to choose between three difficulty settings as seen in several Contra games. 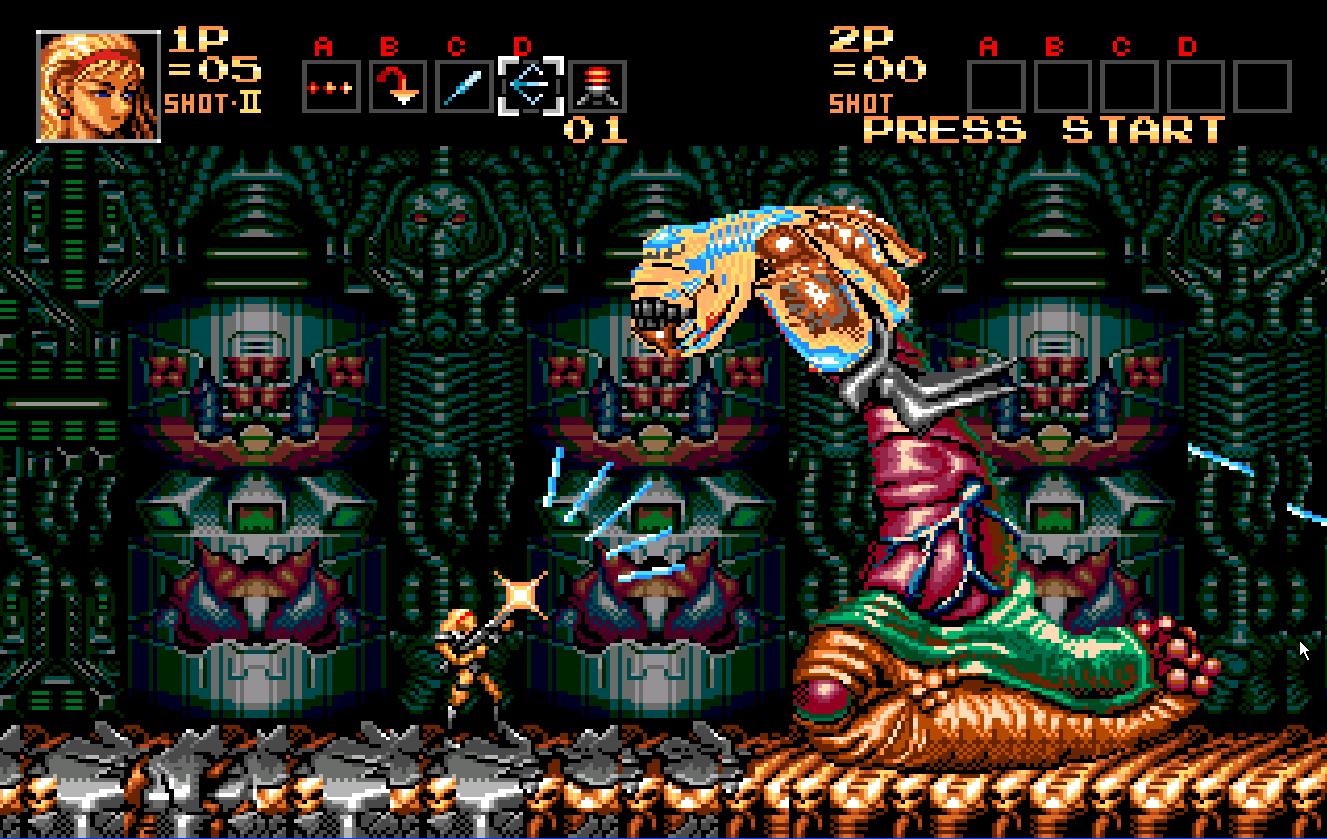 Since its last major releases, the Contra series has not really had any comparable new games. The current gaming climate would seem particularly favorable to the development of a new Contra game, if one were to look at the rising success of indie platformers along with the resurgence of classic platforming games in the 2D space, such as the Mega Man games.  However, by design, Contra is a simple game to play but incredibly difficult to be successful with. The games are not that long, which may be a difficult sell for both consumers and developers who may shy away from making a high-investment sequel on consoles.

It has been quite some time since the short E3 2011 trailer that apparently announced a new Contra game. Not much was featured other than the classic fire arc that forms the “C” in Contra. Besides some stylized pixellated font, there’s no telling what it might have been alluding to – some sort of re-release package or individual, an entirely new game, anything. It is difficult to be conclusive, even in spite of the consistency of Contra releases thus far

It really isn’t out of the question, though. Similar in design to the classic Contra games, Shinobi III: Return of the Ninja Master was re-released for the Wii Virtual Console and the Nintendo 3DS. For the past few years, SNK of King of Fighters renown has been regularly releasing some of their oldest but most respected individual arcade titles on Nintendo hardware, and also making them available through compilations – one recent notable example being the SNK 40th Anniversary Collection. 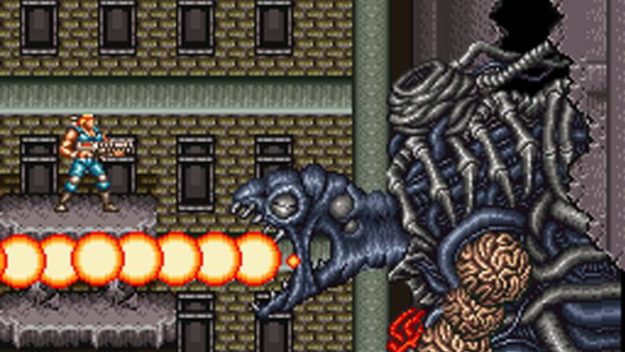 What we do see here is a series with a couple of different directions but with a set of formulas that can always be revisited and repurposed. But there simply isn’t much indication of a new game otherwise. Hard Corps: Uprising, launched back in 2011, and what’s been released since then are ports (including Contra III for the New Nintendo 3DS and the Wii U Virtual Console) or pachislot games. While Konami certainly respects the legacy of the Contra series, it’s hard to say what a new game would look like.