Intelligent Systems took a game that was almost perfect, and made it better.

At this point, it’s well established that Nintendo’s third attempt at an online storefront, the eShop, is where they finally nailed it, at least in terms of content. Some of the best 3DS games are eShop exclusive, games like Sakura Samurai, Dillon’s Rolling Western, Ketzal’s Corridors, Unchained Blades, and Crimson Shroud, all of which are hands down some of the most compelling experiences offered on Nintendo’s newest handheld.

Of course, in this blaze of glory for the eShop, it is perhaps somewhat easy to forget the game that really kickstarted it all, the game that to this day remains one of the 3DS’s must own titles, and a true showcase of its capabilities, a game that is destined to go down as a handheld gaming classic. That game was Pushmo (known as Pullblox in the PAL territories), Intelligent Systems’ first released 3DS title that was a puzzle game unlike no other, and instantly turned the perception of the eShop at large around. It became on of the 3DS’s first success stories at a time when the system was struggling to find its footing in the market, and along with Super Mario 3D Land and Mario Kart 7, cemented its status as a legitimate and valid gaming platform.

Just one year later, then, Intelligent Systems return to the 3DS with their sequel to Pushmo, a game that expands on the original’s concept so ludicrously that it renders it obsolete in every way possible, and plummets to the top of the all time greatest puzzle games list. Make no mistake, Pushmo was brilliant, and it still remains brilliant. It’s just, Crashmo somehow outdoes it in every possible way, becoming the game that every 3DS owner should put on their system as soon as they unpack it for the first time.

In case you aren’t familiar with the original’s concept, Pushmo was a delightful puzzle game, that somehow managed to differentiate itself in a market full of cheap made for mobile puzzle games. It had a remarkably simple concept- there would be multiple blocks of varying shapes (and they could be any kind of a polygonal shape) arranged into one solid block. You could push and pull these blocks, with stipulations, trying to arrange a path for yourself to the goal at the top that you would then have to traverse, platforming style. The sheer addictiveness of the game’s simple design took everybody by surprise, and after you were done with the 240+ levels that the designers had included with the game, there was so much more to do, because you could make your own levels, any way you wanted, and you could even share them online via QR codes. Indeed, an entire thriving community of downloadable Pushmo levels sprung up online, and extended the life of the game even further. 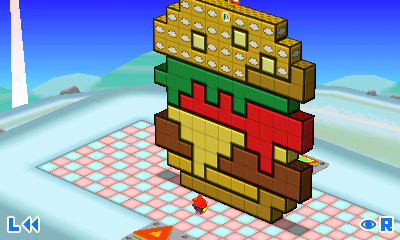 Crashmo builds on that concept. Most of the mechanics that it adds sound so simple that it feels like they shouldn’t make any difference to the core gameplay. And yet cumulatively, they completely rehaul the experience, until where Crashmo almost feels like an entirely new game, with a new concept.

The most obvious change is perhaps the simplest one: you can now slide blocks from side to side. Instantly, and right off the bat, this opens up incredible possibilities for puzzle building (particularly since you have a lot more space to work with, with these sideways blocks, as opposed to moving them just ‘into’ and ‘out’ of the screen, which provides only three spaces of movement). Really, something as simple as this shouldn’t change the gameplay that much, but it does, until it almost becomes hard to go back to Pushmo, because Crashmo trains you to think in all directions at once.

Other improvements abound: there are new kinds of blocks, called the ‘Float’ blocks, which defy gravity, and stay afloat, again adding a wrinkle to the traditional gameplay mechanics of Pushmo. The camera has been substantially improved (veterans of the older game might remember some frustration with the camera, which could only be manipulated to strafe sideways, and only in a limited sense). Now, you get complete 360 degree control over the camera in the game, and the difference this makes on your puzzle solving cannot be understated, allowing as it does, for you to plan your next moves ahead more efficiently.

In addition, the old tricks and shortcuts from Pushmo return. Yes, you can still reset the puzzles should you go wrong, and you still can turn back time to where you think you might have made the mistake instead of completely erasing everything you did. Yes, all the old pipes and ladders reappear, as do new additions in the form of doors, which allow for horizontal teleportation. 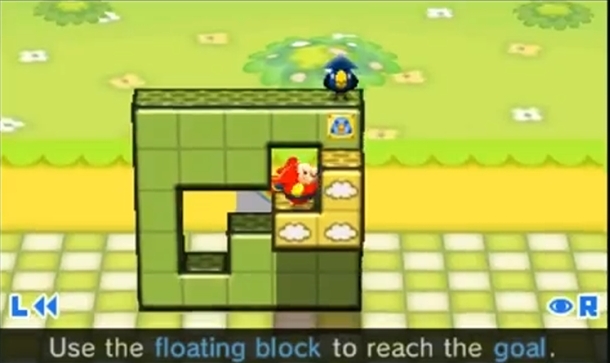 Literally, the possibilities that these new additions allow for are infinite, so that by the time you are done by the game’s (admittedly beefy amount in number) built in puzzles, it feels like you have barely scratched the surface. Happily enough, Crashmo, like Pushmo before it, allows for sharing of puzzles via QR codes; considering how devious the puzzles made by the community got last time around, it is a safe assumption that Crashmo’s best puzzles will come after the game has been out and about for a while.

Really, there isn’t a whole lot to complain about here. Intelligent Systems somehow took a game that was almost perfect, and made it better, to the point that Crashmo is now officially in the same league as Tetris when it comes to puzzle games: infinitely replayable, forever enduring, a true classic that manages to delight and challenge you everytime you play it, against all odds. Coupled with the traditional Nintendo charm, and the Intelligent Systems veneer of polish, you get a game that absolutely and at all costs deserves to be on your 3DS, no questions asked. This one is non negotiable.

Incredible and addictive design, brilliant puzzle designs, the improvements over Pushmo all add up to provide an experience miles ahead of the original game, retains everything that was good about Pushmo, great value for money

Intelligent Systems somehow took a game that was almost perfect, and made it better, to the point that Crashmo is now officially one of the greatest puzzle games of all time.

A copy of this game was provided by developer/publisher for review purposes. Click here to know more about our Reviews Policy.
Tagged With: 3DS, crashmo, eShop, intelligent systems, Nintendo, pushmo