Didn’t you just love Mouse trap as a kid? Sure it took ages to set up and it was a really standard board game aside from the mechanical pieces that barely worked anyway, but the joy of seeing these machines work seemed strangely fascinating as a child. Crazy Machines follows a similar line, with players having to fill in missing parts to create complicated machine mechanisms that link together to perform mundane tasks. As tedious as it all sounds it can be rather enjoyable in a primitive way, but severe balancing issues prevent it from being a real winner.

The main bulk of the game is the puzzle mode, which tasks you with finishing off a variety of machines in order to finish a certain task. It may involve rolling a ball down a series of platforms to hit a target, or a candle that needs to be driven by an RC car that pops a balloon at the end of a course. The scope of these wacky contraptions is impressive, with a huge amount of different objects to use. When you bring in chains and ropes as well, the variety of it all is quite impressive. The problem lies in how self explanatory some of the solutions are. You’ll have a wooden plank in your inventory and a series of planks that carry a ball with a conspicuous gap somewhere in the middle. It doesn’t take a Sherlock Holmes to solve this particular mystery, and more often than not you’ll be clearing stages with relative speed and ease. I was initially taken aback by the game’s claim to having over a hundred levels but, when they’re all this short and simple, it isn’t quite as awe inspiring. 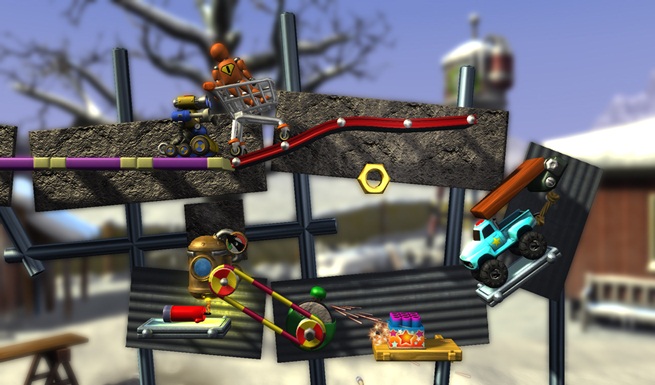 The variety of tools on offer builds upon the concept successfully

I say all the game’s stages are easy, but this is where the balancing issues come in. The game has no identifiable learning curve. I was clearing stages by the seconds up till around the ninth level, where it took me absolutely ages. All the hand-holding the game had done up to that point was completely removed, leaving me with a puzzle far more challenging than any of the ones before. After eventually beating it, the the next few levels reverted back to being really easy. Who tested this thing? I’m not trying to say all games should hold the player’s hand indefinitely, but the difficulty increase just makes no sense in Crazy Machines, leading to an often jarring experience.

Now we come to another balancing issue, this time one that is actually related to physical balance: The physics engine. A game such as this requires impeccable physics that must be both realistic and enjoyable. The engine employed in Crazy Machines doesn’t really do either of these things. It certainly works, but the whole thing just feels unsatisfying. You get used to it eventually, but the balls seem to roll and drop so fast that it seems unnatural to begin with. A smoother physics engine would’ve benefited this game greatly. 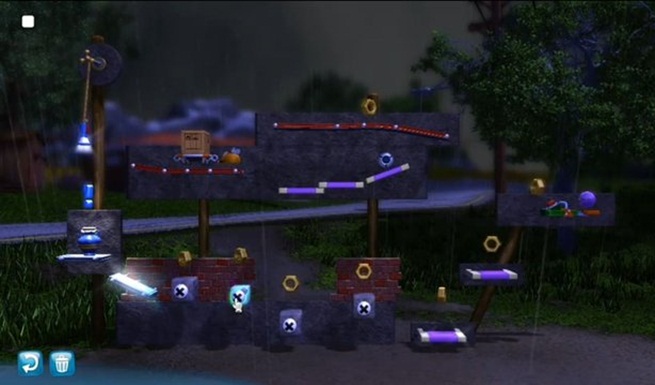 The difficulty curve is all over the place

As far as how the game looks and feels, it’s not too bad. The graphics are polished and effective, though there isn’t much they could do wrong considering the simplicity of the game. There are a few design choices though that make no sense. There’s this wacky looking professor guy who appears on all the menus who just looks a bit weird. Is he in any elements of the game? No. Is he meant to be some kind of endearing mascot? I sure as hell hope not. He serves as little more than a poorly linked design element that diverts from the game. The sound too didn’t really do it for me. The soundtrack is interesting enough in how varied it is, but it is wildly inconsistent as a result of this. Not only that, but it also doesn’t really sound like a game soundtrack, being far too jagged and standing out too much. The music should be much smoother and more subtle for a game like this. In fact, it might have been a better idea for there to be no music at all.

Once you’re done with the main bulk of the puzzle mode, there’s still a little bit more life left in Crazy Machines. Challenge mode unlocks half way through the game, but it serves as little more than extra levels. The addition I thought would be a real winner is the game’s level creation mode, but it’s crippled in so many ways. For a start it’s blooming complicated. The game has enough control issues with you constantly having to move a cursor around the screen with a joystick, so when you throw in poorly explained logic controls and physics editing it’s a recipe for irritation. There’s an upside to it though of course, as complicated tools mean that the dedicated few who master them will make some really awesome levels we can all download, right? Wrong! You can’t upload and share levels you make. What do you do with them then? You just let them fester on your hard drive is what. This might have been acceptable ten years ago, but we live in a very different time now. As if to add insult to injury, the only online functionality in the game comes in the form of an arbitrary leaderboard. I’m usually not a great fan of the leaderboard, but it can lead to addictive battles with your friends for the best score when implemented well. This can’t be said of the leaderboard in Crazy Machines. It doesn’t even tell you what it measures. Is it points? Time taken to complete? Greatest level of boredom reached? Hell, it might as well be. 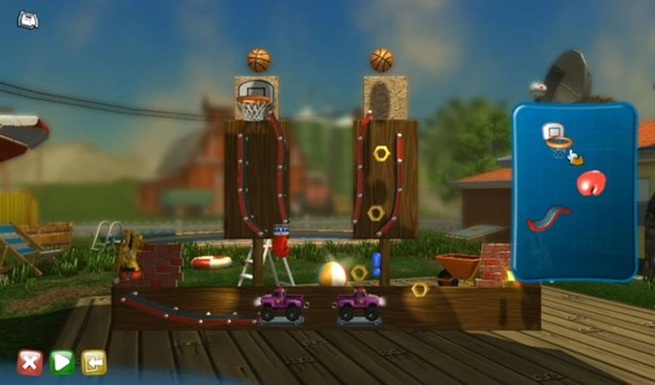 The graphics are decent but the sound is… weird

It frustrates me discussing Crazy Machines Elements, as the core game is actually quite enjoyable. The developers have an interesting concept on their hands, that just hasn’t reached its potential. Bizarre presentation elements, a poor difficulty curve, slightly ropey physics and a completely crippled and pointless level editor all conspire to prevent this game from maximising its potential. If you can’t think of any other games you want at the moment then Crazy Machines will entertain you enough, but there are plenty of better titles out there.

Decent Visuals, A lot of levels, Puzzle solutions can be satisfying, A good selection of different objects, Custom creation tools

Final Verdict:
FAIR
A puzzle game revolving around using complex machines to do simple tasks, Crazy Machines is a unique and enjoyable enough experience that is somewhat crippled by balancing issues and a lack of appeal
A copy of this game was provided by Developer/Publisher/Distributor/PR Agency for review purposes. Click here to know more about our Reviews Policy.