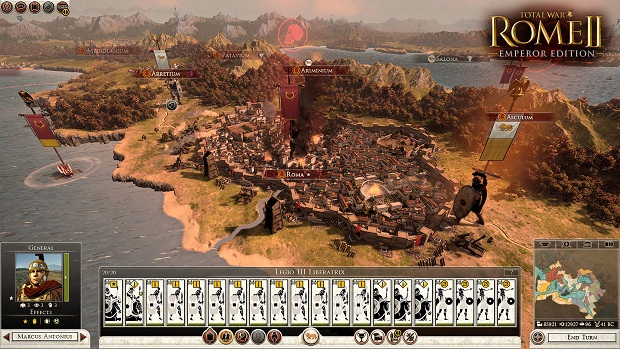 The Total War series is one that is near and dear to my heart, I’ve been playing them for a very long time be it in the vanilla format or a modded variant. So I’m quite pleased to tell you that the Creative Assembly have announced a The Total War: Rome II Emperor Edition. The Emperor Edition brings together all of the existing free content and adds a new campaign, the Imperator Augustus campaign.

Further more, if you already own  Total War: Rome II then you get a free upgrade to the Emperor Edition via an automatic update when it launches. The Imperator Augusts campaign adds a new campaign with hundreds of hours of warfare and gameplay on a new campaign maps that shows the state of things during the Second Triumvirate War, that’s the important one.

When Total War: Rome II first launched it came under heavy criticism from both new players and veterans like myself for being an inferior game to its still impressive predecessor, but since then the Creative Assembly have been paying close attention to the fans and their feedback, this allowed them to issue numerous patches and updates to the game alongside new content and free content.

The Creative Director of the Total War Team, Mike Simpson has said, “ROME II was far and away our most ambitious game. We see more people playing, and playing for longer, than any other game in the Total War series. However, we take our players’ feedback very seriously. Through the multitude of improvements and free content updates we’ve brought to ROME II since its launch, we’ve worked hard to try and meet their expectations. We want Emperor Edition to be remembered as one of our finest games.”

So, will it be remembered as one of their finest? Probably not, I think to much harm has been done. But the community is still there and the game continues to sell rather well, so time will tell.