In the absence of actual AAA releases for the PlayStation 4 and the Xbox One (at least so far), indie games have filled up the void. This is great news, as AAA games have increasingly suffered from bloat and an often misguided emphasis on cinematism in recent years, whereas indie games continue to thrive as they return to the basics of emphasis on gameplay, and player agency and accountability in video games.

PlayStation platforms have led this indie game renaissance from the forefront, and we’ve had some amazing games as a result- Dead Nation, Journey, Resogun, and Transistor come to mind immediately as great indie games that broke out on PlayStation. The other side of this is, games that were previously big only on other systems, such as PC or iOS, get a new lease of life as they are exposed to a more engaged, mainstream audience on PlayStation. So we have seen a lot of games make their way over to Sony’s newest console and platform.

One such game is Crimsonland, which is a remake of the 2003 shooter of the same name for the PC. Crimsonland essentially sees the player fighting off waves upon waves of enemies, featuring the same kind of quality twin stick shooting action that players might already be familiar with thanks to aforementioned games like Dead Nation or even Resogun to an extent. However, while Crimsonland shares in these basic gameplay similarities with those two games, it does not necessarily share in their quality or high standard of polish. Don’t get me wrong, Crimsonland is technically a good game, with all the right elements in place. It just seems to lack a soul that gives it any overall cohesion, making everything feel disparate, and causing the entire game to feel mechanical, banal, and repetitious. 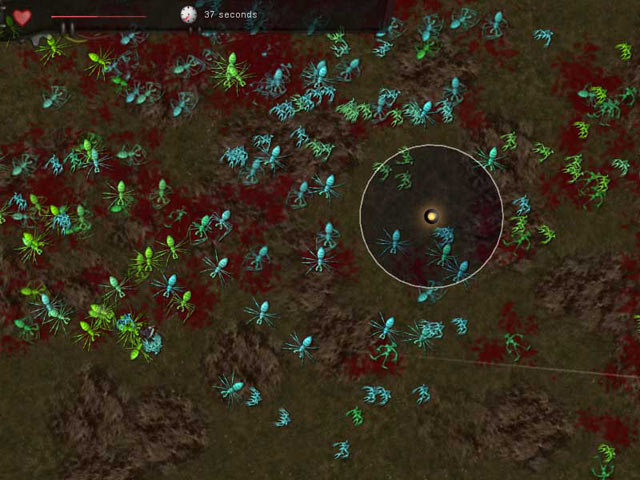 "Crimsonland is technically a good game, with all the right elements in place. It just seems to lack a soul that gives it any overall cohesion, making everything feel disparate, and causing the entire game to feel mechanical, banal, and repetitious."

This sterile and soulless feeling is perhaps immediately apparent when you see the game’s graphics- you wouldn’t be able to tell what is wrong with them at a glance, as they seem to be 1080p and 60 FPS, with some pretty particle and lighting effects. But you play it a little more, and that’s when you realize, the graphics are just there. They have no identity, they have no charm, and they do as little as possible to get the message across. Visual mnimalism by itself is not a bad thing- Proteus, for example, achieved incredible things with a very minimalist graphical palette- but in this case, it’s indicative of a larger problem.

The graphical style’s issues are enhanced by, and further enhance, the similar issue of banality in the gameplay. Crimsonland is basically a ‘wave’ shooter- you are tasked with clearing out each level of all enemies, taking out wave after wave, earning better weapons (you start out with the puniest gun which only has one, very weak, very ineffective shot), and better point multipliers along the way. It’s tried and tested, the genre is known to be fun, and keeping players coming back, and Crimsonland, in those moments, seems to play well, as you lose yourself in just trying to clear out those enemies before they can get to you.

But then that nagging feeling comes back, and it’s an issue with the game that’s far more intangible than having all the technical aspects in place- the game just feels trite, there’s no escaping it. Maybe it’s because, unlike, say, Resogun, where everything you do is given spectacular context thanks to the game’s presentation, your exploits in Crimsonland are sort of exploited to pretty basic squiggles and lines on the screen, with only the very literal splatters of blood on your screen giving you an idea of the ferocity of the battle the game is probably trying to convey, but it doesn’t actually feel like anything you are doing in Crimsonland is meaningful, even within context of its own game world. The game’s actual story mode doesn’t even seem to have any overarching context (despite the fact that it actually does, it’s just lessened by the triteness of the game itself), rather feeling like just a stringing together of arenas from its Survival Modes. 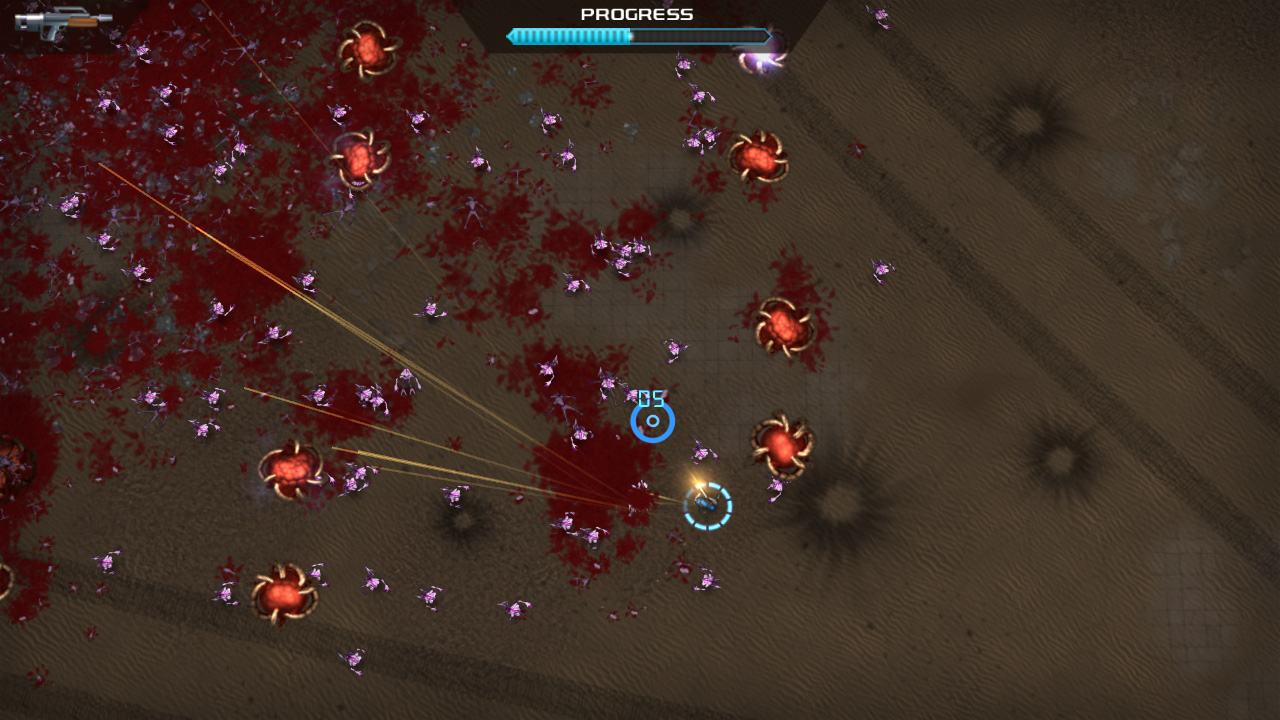 "Maybe it's because your exploits in Crimsonland are sort of exploited to pretty basic squiggles and lines on the screen, with only the very literal splatters of blood on your screen giving you an idea of the ferocity of the battle the game is probably trying to convey, but it doesn't actually feel like anything you are doing in Crimsonland is meaningful. "

These are just your initial impressions. Later on, the actual mechanical failings of how Crimsonland plays also becomes apparent, as it quickly becomes clear that winning in Crimsonland isn’t entirely up to you.

You remember how I said above that the basic weapon in the game, the one that you start out with, is useless? Yeah, okay, so you need the other weapons to actually effectively do anything, which is fine, that’s how these games usually are. The issue is, unlike other games in the genre, which seem to follow a scaled curve in weapon drops, giving you better and more effective weapons the better you play, Crimsonland’s weapon drops seem to be entirely luck based. You can have a full level of gameplay where you get nothing but terrible weapon drops, which makes the game much harder than it actually is.

I understand what must have been the ostensible purpose for this kind of a setup (I think?): to ensure that players would get to familiarize themselves with all weapons, and then use them all, instead of just sticking to favorites. But this concept is fundamentally flawed for two reasons: 1) this idea only works if all the weapons within a game are meaningfully balanced (they aren’t in Crimsonland), and 2), this is an arcade wave shooter. The point of this game is to kill off the enemies in the most efficient way possible, and yes, that means that players will inevitably gravitate towards certain weapons that they like the most. That’s how these games work.

I don’t know, really. I mean, I guess, like I said, in the heat of the moment, this game can be fun. Unfortunately, overall, it simply falls flat, and when you especially consider the exorbitant price that this game asks for, and the general level of quality of the games on PSN, you sort of begin to question whether you actually, really want this game after all. Maybe you really like arcade wave shooters. Maybe you just want something that can be fun in short bursts and nothing more. Maybe you like the idea of luck based item drops in a wave shooter. If you fall under any of those categories, feel free to go ahead and get Crimsonland. Others, however, may keep a safe distance from this game and rest assured that they are missing out on nothing.

The game can be fun for short periods of time, as all score attack wave shooters are

The graphics are shockingly bad, luck based drops for power ups and weapons lose any semblance of skill based gameplay the game may have otherwise had.

Final Verdict:
MEDIOCRE
There are much, much better games, and even much better similar games, on the PS4. Get those unless you really are a major fan of this genre.
A copy of this game was provided by Developer/Publisher/Distributor/PR Agency for review purposes. Click here to know more about our Reviews Policy.