In 8 long years of development, CrossCode has been an ever-changing project. Developer Radical Fish has journeyed from an ambitious 2012 demo, through crowdfunding, to ultimately releasing a final product on PC in 2018 and now finally on consoles. Set in a deep, ever-changing MMO, CrossCode’s extended development is evident in its complex story and layered gameplay.

While it starts as a straightforward journey through its game-within-a-game, it soon delves into deeper understandings of its setting and beyond, all the while complementing its interesting story with clever writing and rewarding combat that works as both a love letter to the 16-bit era of gaming’s past and a worthy modern RPG that mostly achieves what it sets out to do.

CrossCode draws instant comparisons to Ready Player One by being set in an in-game MMO, called CrossWorlds, where players can synchronize their bodies into the game and effectively fully immerse themselves into its world. In CrossWorlds, players can join guilds, complete quests, and, like Ready Player One’s OASIS, look for hidden clues and lost treasures. You play as Lea, who from the outset has lost her memory and is told she is in a coma in the outside world, only staying conscious within the confines of CrossWorlds. For a good chunk of the first part of the game, your experience playing CrossCode mirrors that of someone playing CrossWorlds.

Aside from occasional hints at Lea’s true story, you follow CrossWorlds’ main quest line, meeting other players, completing the dozens of side quests, and leveling up along the way. While it can get overwhelming, the game within the game is absorbing, with its well-written side quests and diverse environments, and I sometimes felt an urge to stay in the game itself and play it like there were no larger plot.

Though you are playing an in-game MMO, you’re not actually playing with other actual people. Instead, the characters you meet are meant to mimic what interactions would look like, with people giving their own in-game motivations and explanations of their real lives. As you meet new people along the way, you can add them to your party and let them follow you around the world to collectively complete quests. Not everyone is logged in at the same time, though, and the characters are filled with personality to make them seem like actual people. 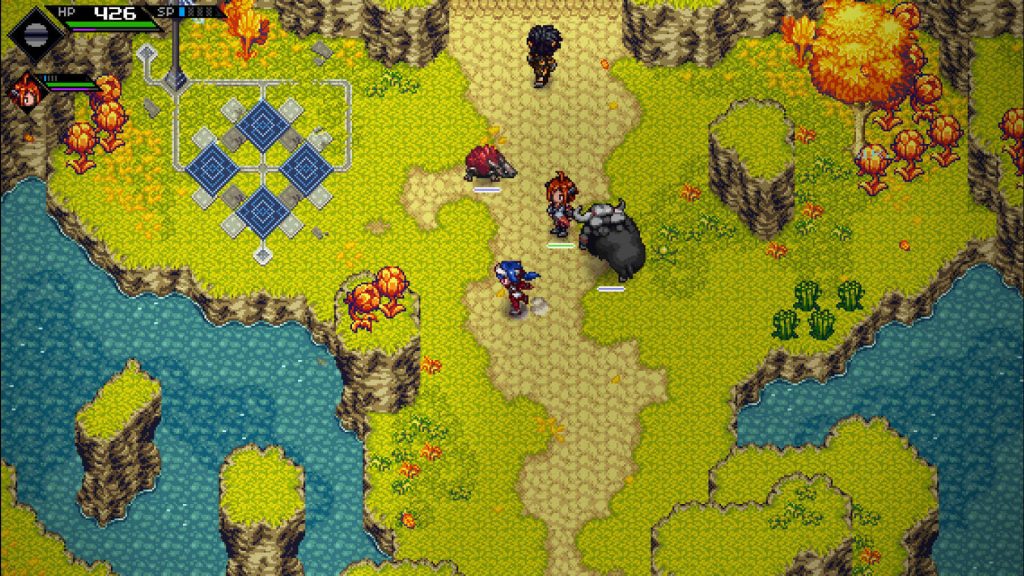 "Lea, on the other hand, is effectively mute, suffering from so-called voice synchronization issues that keep her from being able to speak within CrossWorlds."

One of the first people you meet, Emilie, is a student who keeps telling you about her school projects and unbearable group members, which, alongside her French exclamations and detailed animations, gives her some relatability and a hard connection to reality. Every character has beautiful detailed character models for their dialogue sequences that showcase their expressiveness without much movement. The clever writing leaves a lot of funny moments to go around, though it often falls into the trap of quipping about the game’s problems and refusing to actually address them, such as noting lazy quests or repetitive puzzles that you still ultimately have to complete.

Lea, on the other hand, is effectively mute, suffering from so-called voice synchronization issues that keep her from being able to speak within CrossWorlds. She communicates with a software developer who wants to help her regain her memories, but she can only speak through a handful hard-coded words, like “Hi” and “How?” Despite this, she’s still surprisingly expressive and impressively emotional. She uses her sparing words effectively, and even moments like an exclamation point or question mark convey exactly what they intend. As she comes to find out her true identity, it’s hard not to sympathize with her despite having so few words at her disposal.

By the end, CrossCode’s story predictably has taken control, with the last 3 chapters taking up nearly half of the 35-or-so hours it took me to beat it. Its pacing is back heavy in its revelations, and some of them definitely could have been interspersed throughout the early stages to give more context to Lea’s story in the first 20 hours. Despite this, though some story beats are predictable from the outset, I found it to be ultimately complex and interesting, and the late moments where everything comes together make a lot of the journey worth it and left me wanting to go back to retrace some of the clues laced around earlier moments. 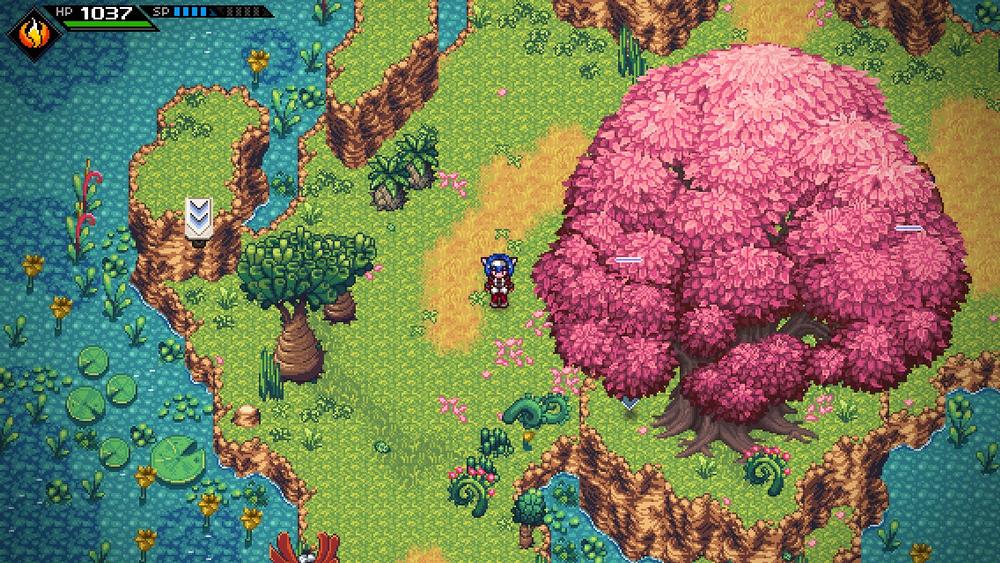 "You can also tone down the difficulty in the menu with sliders to decrease damage taken or enemy attack rates, which is an appreciated option to have when a boss is really kicking your teeth in."

In playing the game within the game, you naturally become accustomed to its gameplay as a retro-style 16-bit action RPG. It mirrors many classic RPGs in its combat, as you fight its varied enemies with your own sets of melee and ranged attacks or powerful special moves. As you level up, you increase your baseline stats of HP, attack, defense, and focus, but you also equip armor and weapons that increase them even more.

Compounding this is the addition of elemental attacks that you gain throughout the course of the story, each of which has its own specialties and unique skill tree with individual upgrade points. This gives you a lot of freedom in where you want to specialize without forcing you to choose a particular style or element. Knowing that enemies have varying weaknesses, you have to balance your use of each element, but you can decide within them if you want to focus on ranged attacks, increasing your baseline stats, or improving your special moves.

I found the combat to be incredibly rewarding over time. Enemies usually don’t attack you unless you hit them first, meaning you can pick and choose your fights, but it’s imperative that you don’t just run through every area. Killing enemies predictably lets you level up faster, and it’s consistently satisfying to take down enemies, even after fighting the same ones dozens of times. Combat is intended to be difficult, as the game informs you before you even start, and it lives up to its promise.

Regular enemy encounters can become overwhelming if you’re not prepared properly or just lose track of your targets. Bosses, too, are extremely powerful, and they force you to learn their moves the hard way before being able to beat them. Most deaths come as fair culminations of being underequipped or making mistakes, though sometimes the screen can get overloaded with enemies, at which point a lock-on mechanic would be useful. It also often falls back on raising stakes within combat by following up a fight against a single enemy with a fight against two or more of the same enemy, a sequence that not only becomes frustrating when the first fight depletes your health but also defeats its own purpose because it becomes so predictable over time.

Naturally, you can buy, trade for, or find better weapons and armor around the world and in towns, which organically make you more powerful. Using new weapons for the first time is always satisfying, and even seeing the stat boosts is a great feeling when you know you’re gaining strength. Also helping you with the difficulty are the other members of your party, who are actually as powerful as other players in an MMO would be, allowing you to have a reliable second or third set of hands to take down bigger enemies. You can also tone down the difficulty in the menu with sliders to decrease damage taken or enemy attack rates, which is an appreciated option to have when a boss is really kicking your teeth in. 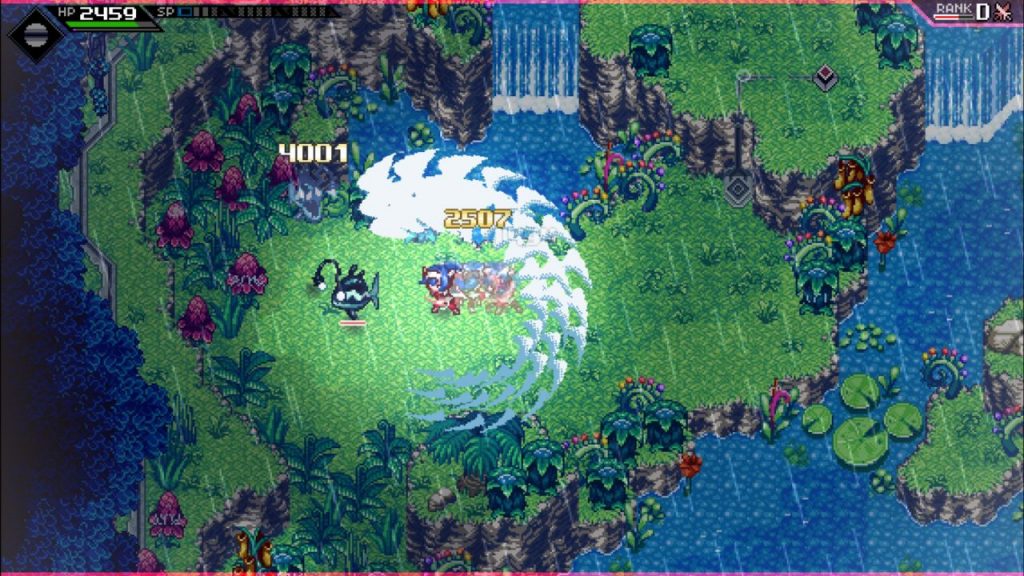 "CrossCode is a great example of how to create a retro-style RPG that still fits perfectly into today’s gaming landscape."

The other side of CrossCode’s gameplay is its puzzles, scattered generously around the world. These utilize your elemental and environmental knowledge to get you to hit certain out-of-the-way targets with a single bullet or cross a particularly large path with cleverly placed blocks. Most of the puzzles are fun to solve, toeing the line between obscurity and accessibility, though there are some obtuse ones that stumped me. They’re calming breaks between enemy encounters that slow the pace, and they’re usually crafty enough to subtly give you hints but still make you feel clever for figuring them out on your own.

CrossWorlds itself is an open world game, so CrossCode inhabits one, too. Environments are appropriately diverse, and they all contain both clear paths forward and more difficult paths to follow that lead to collectibles or loot. Navigating these usually consists of finding out how to get to higher areas and around obstacles, which makes environments much more vertical and efficient with their space, and they’re fun to explore, especially while listening to the infectious soundtrack and watching the fluid animations. The complexity within the map did cause me to get lost fairly often, though, and the lack of a mission marker for main quests and their absence from the quest log makes it difficult to find your next move if you’ve gone off on a tangent.

CrossCode is a great example of how to create a retro-style RPG that still fits perfectly into today’s gaming landscape. While exploring its metagame and the characters that come with it, there is a deep and complex RPG within that gives you a lot of freedom while forcing you to intimately learn its systems to progress. Despite some predictability in its story and confusion around its map, CrossCode creates a fully-realized game-within-a-game that’s interesting on its own and in the context of the world around it. It’s not only an interesting exploration of the world within a game, but it’s a great action RPG on its own merit.

Final Verdict:
GREAT
CrossCode creates a wonderful world for its characters to immerse themselves and for us to explore, and its gameplay allows it to also be a wonderfully complex RPG.
A copy of this game was provided by Developer/Publisher/Distributor/PR Agency for review purposes. Click here to know more about our Reviews Policy.