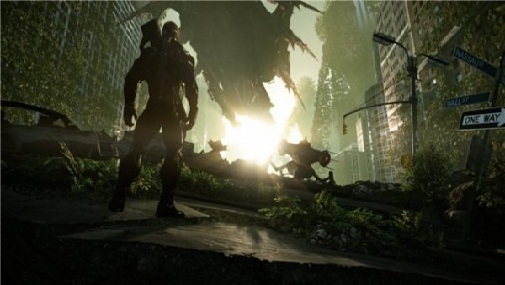 Crysis 3 has been in the news a lot recently, and it doesn’t look like that’ll be changing anytime soon. A new screenshot from the game has been leaked, and it hints at the setting, the enemies and the general tone and atmosphere of the yet officially unannounced sequel.

The screenshot shows the Nanosuit-ed up protagonist- possibly the same person we played as in Crysis 2 (looks like him), standing in the post apocalyptic streets of New York. As you can see in the screenshot above, the entire city has been overgrown with greenery (the bad kind) everywhere, and everything seems to have an air of isolation. So probably, the game will be set a long time after some cataclysmic event.

We also seem to have a new enemy in Crysis 3- look at the huge spaceship-type thingie in the background. It looks like New York is under a new alien threat, and it’s much more dangerous and more formidable than ever before.

Crysis 3 was leaked earlier this week, and later again, when the setting was hinted at the first time. The second leak also promised an official reveal on April 16, that is, tomorrow. Read the full report here.

With Crytek beefing up the CryENGINE 3 SDK, you can expect Crysis 3 to have significant upgrades over its predecessors.