It’s hard to think of many games in recent years that have generated as much hype and anticipation as Cyberpunk 2077 did in the lead-up to its launch, but to say that things went monumentally wrong for the CD Projekt RED RPG upon release would be a massive understatement. Missing features, questionable design issues, a bevy of technical issues (especially on last-gen consoles), and a number of other significant flaws collectively dragged down the experience in ways that none of us really anticipated.

The last 14 months have certainly been rough for CD Projekt RED then, as the Polish developer deals with the fallout of that disastrous launch, having lost so much of the goodwill and fanfare that The Witcher 3 had earned them in 2015- to say nothing of the class action lawsuits, delistings, refunds, and everything else the developer has had to deal with. The stance that CDPR has maintained since then is that Cyberpunk 2077 is going to come good in the long term, with multiple updates, fixes, and additions planned- and a major milestone on that road to recovery is a native PS5 and Xbox Series X/S launch for the game.

This is just another step towards that still-distant destination though, so if you go in expecting a completely overhauled game that makes good on all the lofty promises that CD Projekt RED made for years before Cyberpunk 2077 launched, you’re going to be disappointed. After over a year of updates and a touched up launch on new-gen machines, Cyberpunk 2077 is certainly in a more technically stable condition than it was in December 2020, while a few of its gameplay issues have also been addressed- but this is still a deeply flawed game, a serious case of missed potential, and though the improvements made here are certainly noticeable, the issues they’ve addressed are just a drop in the ocean.

"Cyberpunk 2077 is certainly in a more technically stable condition than it was in December 2020, while a few of its gameplay issues have also been addressed- but this is still a deeply flawed game, a serious case of missed potential, and though the improvements made here are certainly noticeable, the issues they’ve addressed are just a drop in the ocean."

The most noticeable improvements have been made to the game’s technical condition. I reviewed Cyberpunk 2077’s PS4 version via PS5’s backward compatibility when it first launched, and it was an abysmal experience on this front, to the extent that the game was crashing completely on an average of once every hour. It was by far one of the most technically rough and unpolished games I’ve played in recent memory (and I reviewed Fallout 76 at launch, so that’s saying something).

Coming back to the game for the first time in over a year, the improvements are obvious to see. I haven’t experienced any crashes, and where once going through the game was like walking through a carnival of hilarious glitches and game-breaking bugs, now, it’s more like any other technically flawed open world game. There are still issues here, and not small ones- the frame rate still dips every so often, NPCs can often be found t-posing, and texture pop-in is still a little too intense, especially when you’re driving through the city. But so far, I haven’t run into anything game-breaking. It’s still a buggy game- but not so much that it’s literally unplayable, as it was at one point.

Visually, it looks solid enough. Cyberpunk 2077’s graphics were one of the areas where the game did impress, even on last-gen consoles, even at launch, so it’s not surprising to see it taking that a step further on more powerful hardware. There’s an option for enabling ray-tracing as well, which makes the neon-drenched environments of Night City pop that much more, though that does come at the cost of performance being halved from 60 FPS to 30 FPS. Even without ray-tracing being enabled though, Cyberpunk 2077 is still a good-looking game, for the most part. 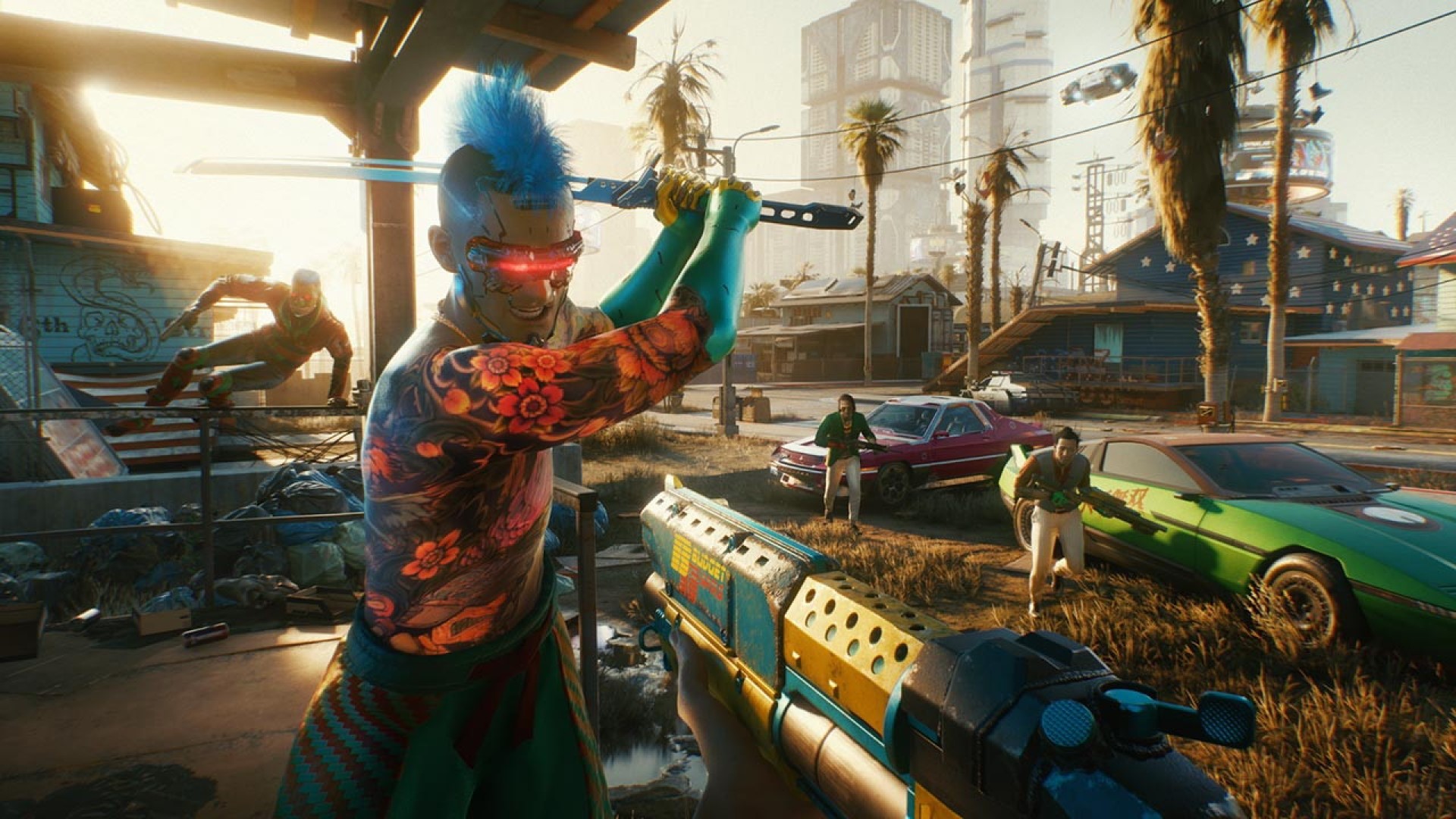 "It’s still a buggy game- but not so much that it’s literally unplayable, as it was at one point."

Tweaks have also been made to gameplay in several ways. Driving, for instance, is improved now, with traction and handling feeling tighter and more responsive. I was in the very small minority of people who actually enjoyed Cyberpunk 2077’s driving even at launch though, so keep that in mind- because even with improvements, it’s still not a radical shift. If you enjoyed the game’s driving in its original state, like I did, you’re going to enjoy it a little bit more here, but if you didn’t, then these changes won’t do an awful lot to change your mind.

Meanwhile, the AI is another area where CD Projekt RED has made done some polishing, with enemies now being able to function like actual human beings in combat situations (or close enough, anyway). Firefights still feel a little too rudimentary, and any enemies you come across don’t ever really do much to truly threaten you in any meaningful way- but at least they’re not as completely braindead now as they were not so long ago. On top of that, AI has also seen improvements outside of combat, most notably with how NPCs (both on-foot and in vehicles) react to you or what’s going on around them- so if you pull a gun on a civilian, they’re not just going to cower on the ground in front of you.

The running theme of all of these improvements, as you must have caught onto by now, is the fact that none of these are anything to write home about. They’re basic improvements that you expect to see in any game in today’s day and age, or at least any game that’s trying to do what Cyberpunk 2077 is trying to do as a story-driven open world RPG. With these tweaks and refinements, the game’s now in a state where it at least wouldn’t get taken off storefront upon launch because of how broken it is. But is it a good game?

"As things stand right now though, Cyberpunk 2077 still has a lot of glaring issues that need to be fixed. For now, all I can say is that it’s gone from being a mediocre game to one that’s slightly better than mediocre."

Still no. It’s a decent game, sure. Cyberpunk 2077 has some genuinely good story moments, some legitimately well-written quests and characters, and occasional flashes of brilliance with choice and consequence mechanics. But it still feels so vapid, so shallow. The open world is there to be looked at, not to be engaged with, serving as little more than set dressing, and most of the game’s role-playing systems still feel too messily executed, if not as much as they were before. Drastically dropped standards might give the perception that this is a huge leap forward, but it’s actually just the bare minimum. This is a marginal improvement at best.

Of course, it’s not reasonable to expect sudden and massive improvements overnight. Given the state the game launched in, it’s going to take many significant updates over a long period of time to get it at least somewhat close to the level that many had hoped it would be at over a year ago- and even that might not be enough. As things stand right now though, Cyberpunk 2077 still has a lot of glaring issues that need to be fixed. For now, all I can say is that it’s gone from being a mediocre game to one that’s slightly better than mediocre. If you have been waiting to take your first steps into Night City until meaningful improvements are made to the game, my advice would be to wait a little bit longer.

Still a deeply flawed game that needs major reworking to come close to making good on its pre-launch promises.

Final Verdict:
FAIR
Cyberpunk 2077 isn't the disaster that it was at launch, but even on more powerful hardware, it's just a slightly more polished version of a deeply disappointing game.
A copy of this game was provided by Developer/Publisher/Distributor/PR Agency for review purposes. Click here to know more about our Reviews Policy.