Cheaters and completely innocent players alike have been softbanned. 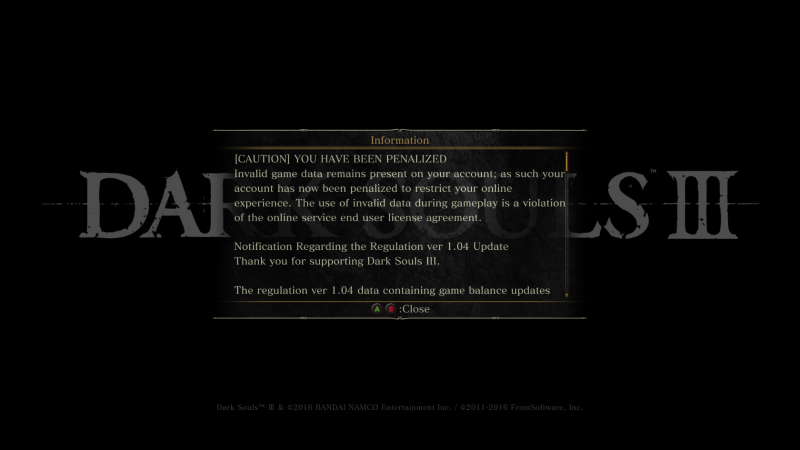 Dark Souls III appears to have a major cheating problem online. But rather than being proactive about the situation, Bandai Namco appears to have taken the easy route by laying heavy on the soft ban hammer. Kotaku reports that many Dark Souls III players were greeted with a “you have been penalized message” upon logging in.

Apparently, anyone who’s game contains invalid or corrupt data is fair game for the softban, which will restrict to playing with other “cheaters.” Invalid game data can arise from player tampering and cheating. But it could also arise from simply running mods. The first Dark Souls game was an infamously shoddy PC port, with a 30 FPS cap and the resolution inexplicably locked at 1024×600. The community-produced DSFix mod went a great ways towards making Dark Souls an actually decent experience on PC, and since then, a small but dedicated modding community established itself around the games.

While Bandai Namco’s concerns over cheating are certainly understandable, we feel that a more proactive, community-friendly approach would’ve been in everyone’s interests. As it stands now, the softban hammer’s sweep is wide: Cheaters are penalized. But so are people running mods, or even people who unwittingly picked up items dropped by cheaters.