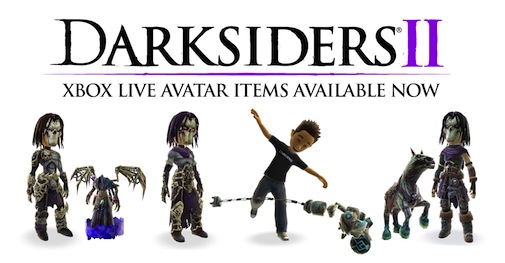 To celebrate the upcoming August release of Darksiders 2, THQ have launched a delicious premium Avatar collection for Xbox Live, with a large collection of items ranging from animated props, to full-on satanic armour. The items themselves range from a paltry 80 to a meaty 400 Microsoft Points.

A similar collection is expected to canter its way onto the Playstation Network in the near future.

In conjunction with this launch, THQ are also giving away a limited quantity of Avatar t-shirts on the Darksiders 2 Facebook page, designed by the game’s Creative Director Joe Mad.

Darksiders 2 follows the exploits of another of the four horsemen of the apocalypse, the ominously named Death, running in tandem with the events of the first game, trying to redeem his ill-fated brother War.

Those pre-ordering the PC version of the game game from shopTHQ will receive free DLC, as well as the entire retail edition of the critically acclaimed Metro 2033.

Darksiders 2 is scheduled to hit consoles and PCs in August, with a Wii U version trotting in at a later date.

For more information about the game, visit the official website www.Darksiders.com