Dawn of the Monsters Interview – Kaijus, Destructible Environments, and More

The brawler genre has been seeing a bit of a resurgence of late, with many promising looking titles still to come. One such game is Dawn of the Monsters, which sees players playing as different kaijus with unique abilities in destructible environments, with all the variety in weapons you’d expect to see from a brawler. It’s certainly a solid elevator pitch, and so to learn more about the game, we recently reached out to its developers. You can read our interview with 13AM Games CEO Alex Rushdy below. 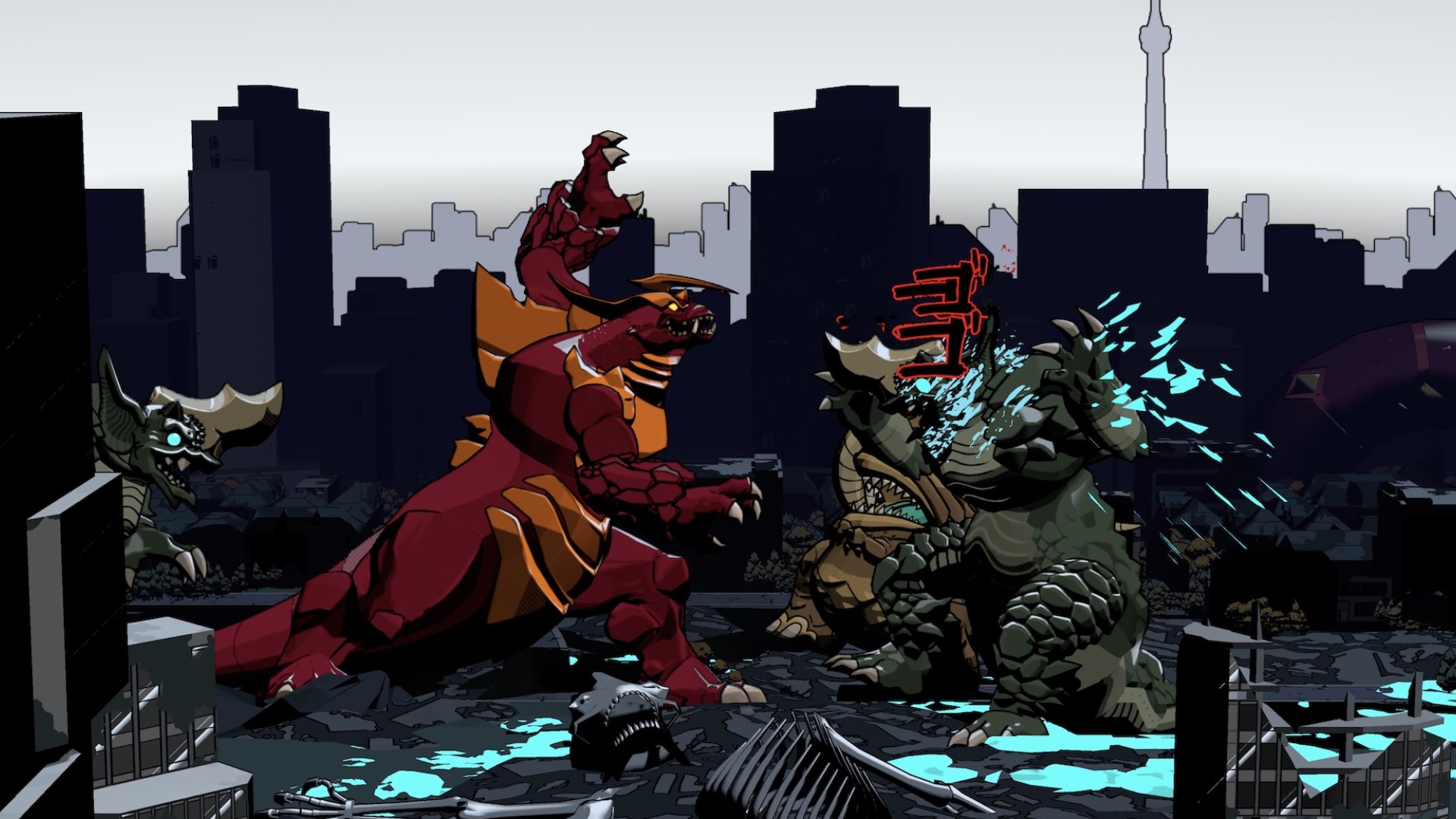 "Environmental destruction is something we knew had to be a key element from day one. There are a lot of different ways you can use the environment to your advantage."

How much of an impact will the destructible environments have on combat?

Environmental destruction is something we knew had to be a key element from day one. There are a lot of different ways you can use the environment to your advantage.

First off is that you can smash any building you can reach and destroying buildings generates “Rage” – a resource used for devastating Rage Attacks. (Don’t worry, the humans have already evacuated!)

You can also whack enemies and launch them into buildings, which deals more damage! Some buildings, like gas stations and electrical towers, will even explode and shock or burn enemies launched into them.

Some levels even feature further environmental hazards like tsunamis, volcanoes, and more, so you’ve got to stay sharp.

We don’t want to spill too much information yet, but the game takes place over a series of missions spread over a handful of famous landmark cities. Each mission has its own unique challenges, and because our game has a PlatinumGames-style ranking system, you’re encouraged to revisit every mission and score that coveted “S+ Rank!” Players that take the time to do this will be rewarded… 😉

How many playable kaijus are there in the game? How much will they differ from each other in terms of play styles and abilities?

There are four playable characters in the game, and we tried to push each one in a unique direction with an entirely original playstyle. First, we’ve got Megadon – a fire-breathing volcano kaiju with magma pumping through his veins. He’s an all-around bruiser-type character. He has really high damage output as well as good crowd control with a flame-breath attack and a fiery AOE explosion to keep people off your back. Great for aggressive players.

Second, we’ve got Ganira – a giant sea beast that can summon tsunamis. She’s got a slower-paced, more methodical style, well-suited for beginners. She can summon a crab minion to attack for her (keeping enemies off your back) and she can even summon a single-hit shield for her and her crab minion to tank through attacks. She’s more defensive, but very fun, especially with her “get over here!” style extendable arm attack.

I’d love to chat about the other two characters, but I’ve got to bite my tongue until we unveil them. All I’ll say is that they push the limits of what I’ve seen in 2D belt-scrolling beat-’em-ups and offer some more technical play opportunities. We can’t wait to share them with you! 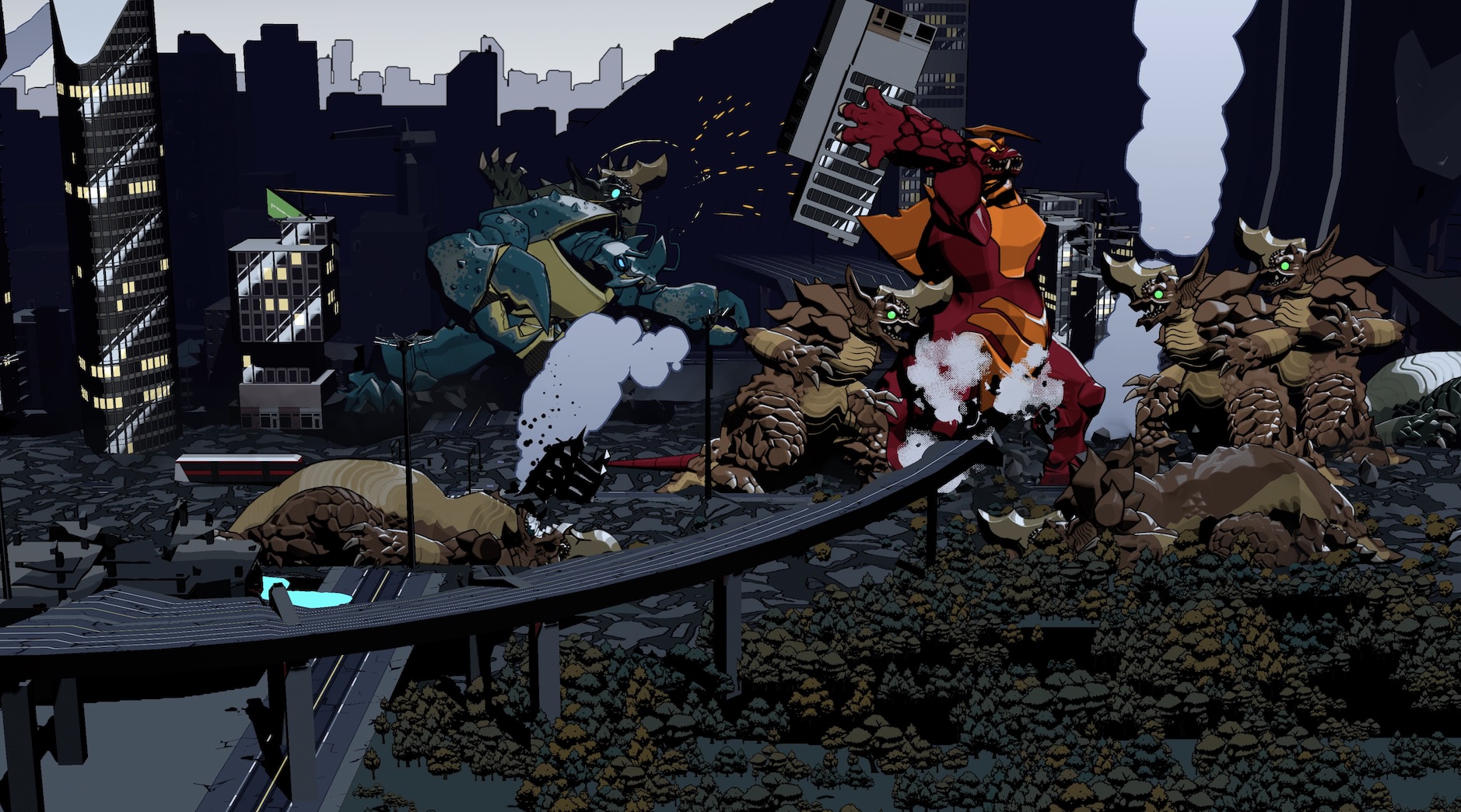 "There are four playable characters in the game, and we tried to push each one in a unique direction with an entirely original playstyle."

Dawn of the Monsters features quite a striking 2.5D aesthetic. How did you land on this look for the game?

Well, we want our games to stand out and when we started work on a kaiju game, we knew we couldn’t do something hyper-realistic and traditionally rendered because it had already been done. We wanted to offer something more striking, bold, and evocative of the imagery we see on kaiju movie posters!

So we decided to look at action manga, the works of Mike Mignola, and striking 2D/3D game hybrids on the market and came up with something that is bold and striking, but still very readable as “kaiju” and “beat-’em-up.”

It took a while, but we’re really happy with it.

How extensive will the upgrade mechanics and progression system in the game be?

Our game is an action game first, so the upgrade mechanics are there to serve the action. What I mean by this is that we don’t find it terribly exciting or interesting in other games when you equip a piece of armor and all it does is give you “attack +2, defense +3” and that’s it. We want every decision you make about your kit to be big and meaningful, and our system does exactly that. How you build your character really changes how you play your character, and it’s a big part of the fun we have playing through the game and comparing strategies.

When it comes to the different worlds that players will be going through in the game, how much variety can players expect?

Players will get to visit several diverse locales from around the globe, and we wanted to make sure we made the most of them. It would be boring if the entire game was just spent smashing cities over and over – a lot of big cities tend to look the same! So we picked places that could offer variety. You’ll be fighting in cities, absolutely, but you’ll also get to head to waterfronts, rivers, mountains, etc. We think it’s a good mix!

Will Dawn of the Monsters have online co-op?

We can’t go into details yet, but yes, this will have online co-op! Please look forward to it.

Right now the game is around 8 to 12 hours long. If you collect every S+ Rank, do every achievement, and read every archives log, it will definitely be longer!

Dawn of the Monsters