Unfortunately, 1080p/60 FPS are all that distinguish Last Round from the original release.

Ridiculous as it may sound, Dead or Alive 5 marked an important transition in the series for me. It was the first game in the series not directed by series creator Tomonobu Itagaki and also marked the return of the franchise to the PlayStation after Dead or Alive 3/4 were both exclusive to Xbox. The visuals also took an important step forward, evolving from the doe-eyed anime-esque teens to more realistic, tougher-looking women. While Dead or Alive 5 may not have struck me as the best fighting game in the world, it still took several necessary steps forward for the franchise.

That was back in 2012 when it first released for the PS3 and Xbox 360 though. Dead or Alive 5 has been through multiple iterations since then with Plus, Ultimate and now with Last Round. The first major change of note is the jump from a 720p dynamic resolution on the PS3 and Xbox 360 to a native 1080p resolution on both the PS4 and Xbox One. DOA 5 has always been a good looking game and now, we get to admire the background details, level design and characters.

Unfortunately, that was the only real change that Team Ninja really implemented into Last Round when it comes to visuals. It’s odd because in this generation, for the most part developers have been working hard to significantly improve the visuals on their PS4 and Xbox One remasters. Go look at Tomb Raider: Definitive Edition which brought a revamped Lara Croft to current gen consoles. Grand Theft Auto 5 is another key example in making your game look so much better on new technology, even if you’re not significantly revamping your textures.

Instead, Dead or Alive 5: Last Round’s engine has been slightly modified for the PS4 and Xbox One. We won’t fault Team Ninja for this since the original’s engine was built from scratch for last generation consoles. Both versions manage to run at 60 frames per second with few drops in between. Hayabusa and Hayate leaping around in various battles was a slightly smoother sight on the PS4 (58 frames average) than the Xbox One (55 frames average) for what it’s worth. But that’s pretty much it. Dead or Alive 5: Last Round bears many similarities to Saints Row 4: Re-Elected which simply received a bump in resolution and frame rate to reach “remastered” status.

In one of the odder design decisions ever made, Team Ninja decided to keep character introductions at 30 frames per second. Although this has always been the case since the original game came was released a few years back. but ponder that for a second and think about switching from the introductions at 30 frames to the actual combat in 60 frames. Jarring? You bet and though it could be justified as adding a cinematic feel to introductions, it’s still a weird transition that will become annoying the more one plays.

More head to head screenshots between the PS4 [right] and Xbox One [left] versions. 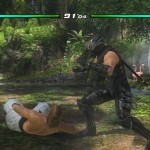 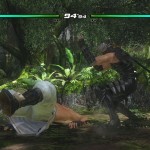 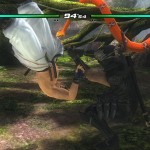 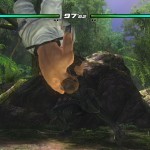 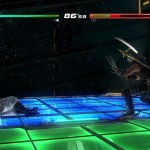 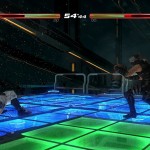 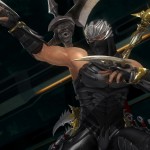 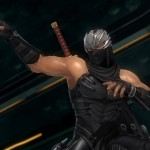 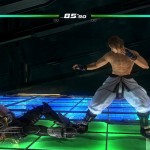 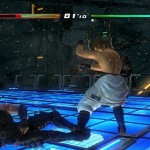 Team Ninja also took it upon itself to offer no discernible post process anti-aliasing or anisotropic filtering to the game which would have improved the quality of the visuals immensely. If you check the character selection screen on the PS3 and Xbox 360, you’ll notice MSAA 2x on the characters. The idea to transition this to current gen characters, especially with the added power of the PS4 and Xbox One, was apparently lost somewhere.

The process wouldn’t even be that difficult – if you look at Dead or Alive 2 Ultimate on the Xbox versus Dead or Alive 4 on the Xbox 360, you’ll find three times the number of pixels and better texture filtering. After more than two years on the market and with better hardware available, would it have killed Team Ninja to use a simple renderer to achieve some kind of anti-aliasing for the actual fights?

A selection of screenshots showcasing the PS4 [right] and Xbox One [left] versions in action. 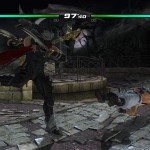 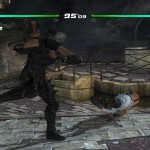 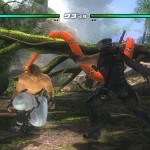 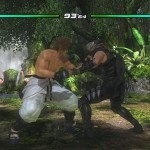 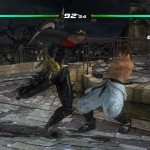 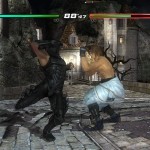 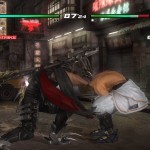 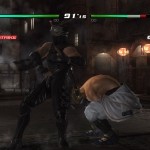 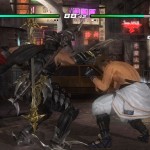 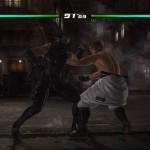 As a result, you’ll see plenty of jagged edges while playing and the overall texture work seems like a direct lift from the previous generation. Keep in mind that many of the new things in the jump from DOA2U to DOA 4 were attempted for the first time such as the MSAA 2X. Rendering tech was fairly similar but there was a little more than a year’s gap between the release of Dead or Alive 2 Ultimate and Dead or Alive 4. With the PS4 and Xbox One providing so much more power and with a longer gap between the original release and Last Round, Team Ninja should have been capable of more than just a 1080p resolution and a 60 FPS frame rate that isn’t even locked.

There was a time when Team Ninja was a pioneer in outstanding visuals for consoles. Dead or Alive 2 wowed a world obsessed with Soul Caliber on the Dreamcast and Dead or Alive 3 showed us just what the Xbox’s hardware capable of. It didn’t stop there as Dead or Alive 2 Ultimate proved the studio could create an effective remake or remaster or whatever one wants to call while significantly improving the visuals.

Dead or Alive 5 was meant to be an evolution of the series towards a more serious fighting game, stepping away from the cartoonish styling of the past. While it may have satisfied fighting fans on the PS3 and Xbox 360 in 2012, Dead or Alive 5: Last Round’s visuals represent a huge missed opportunity. No improved lighting or better shadow quality, no AF, no ambient occlusion for the environments…there isn’t even anything by way of new animations to be seen. This is the exact same game that was available more than two years ago with a higher resolution and a slightly variable 60 FPS frame rate.

For some fans, that may be enough but those expecting another revolution from the series that always impressed us with the technology available today, you’re better off waiting for a possible Dead or Alive 6.

Tagged With: Dead or Alive 5: Last Round, Koei-Tecmo, ps4, Team Ninja, Xbox One