Although it’s been four years in the making, you could be forgiven for thinking little had changed in Capcom’s zombie-killer sim Dead Rising 2. At first glance, it looks just like a slightly glossier version of its predecessor; the protagonist may have changed and the game is no longer exclusive to the Xbox 360, but underneath its new veneer, the fundamental gameplay mechanics appear identical. Once again, you’ll find yourself spending much of your time running between a zombie-infested shopping mall and a security room through a maze of tunnels. But don’t be so hasty to write it off as a retread; there’s plenty more to sink your teeth into.

Dead Rising 2 – developed by Canada’s Blue Castle Games – takes place several years after photojournalist Frank West’s escapades at the Willamette mall. The zombie virus has since spread throughout the US.

Chuck Greene, our new square-chinned protagonist, is down on his luck. His wife’s not the woman he married (like most of the population, she’s succumbed to the contagion), his daughter is infected and is heavily reliant on medication to prevent her turning into a ravenous beastie too, and to make things worse, poor old Chuck is being blamed for a whole new outbreak.

The former Motocross champ is in gambling paradise Fortune City to take part in the hit Terror Is Reality gameshow – a cross between TV’s Gladiators and 1980s action flick The Running Man – where contestants compete to kill as many captive zombies as possible for vast sums of cash. His motivation for taking part in this unseemly gorefest is his doe-eyed daughter Katey who needs regular hits of Zombrex to stop her joining the ranks of the undead. And Zombrex doesn’t come cheap. 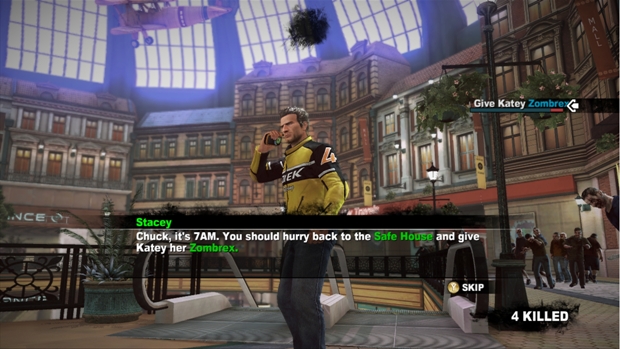 But grainy television footage has emerged of what appears to be Chuck sabotaging the event and causing another outbreak. So there you have it, he’s got just three days to uncover the truth, clear his name and escape the zombie-infested hellhole. And there’s little chance to catch your breath as you’re thrown right in at the deep end after those introductory cutscenes.

You tread the familiar ground of the original game, running about completing missions within strict time limits – but with the added tension of having to dart back to your ailing daughter every 24 hours to give her the antidote. Along the way you’ll encounter stranded civilians who need to be led back to the security room stronghold, as well as various weapon-wielding psychopaths who are hellbent on stopping you. In many ways, it’s a little too similar? But saying that, did we really want too much to change? 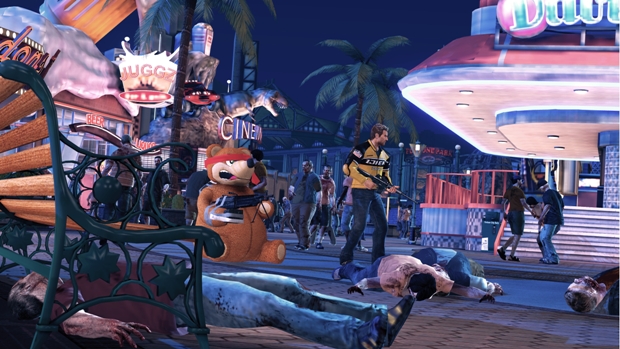 The night life is great

Some of the grievances from Dead Rising have been addressed, notably the ability to save the game more frequently using any of the three available slots. The much-maligned photography element has also disappeared, with PP – or prestige points – that allow you to level up your skills now acquired by disposing of zombies in increasingly inventive ways.
This time round, Chuck is able to dive into one of the many red-doored maintenance rooms dotted about the map, and combine objects he finds about the place. There are apparently hundreds of permutations, which certainly adds some fun to the game. Pulling together two seemingly innocuous objects to create a devastating weapon is very rewarding – as is the animation that kicks in when you prod, poke or pummel a nearby zombie. Collecting combo cards provides tips about which items are best for combining – and allow you to pull off more powerful attacks.

The map is vast and the Las Vegas-like environment, with its diverse zones, offers plenty of variety – both graphically and in terms of gameplay. Yes, there’s the shopping atrium and food courts familiar to the first outing but there is so much more to explore from the casinos to a huge TIR arena. The shuffling undead fill every square inch of this enlarged landscape – the number appearing onscreen now numbering in the thousands rather than hundreds.

There’s also the welcome addition of two-player co-op for the first time, allowing friends to leap into your game and share the experience. Just give them a call on your receiver and they’ll soon pop up alongside you. 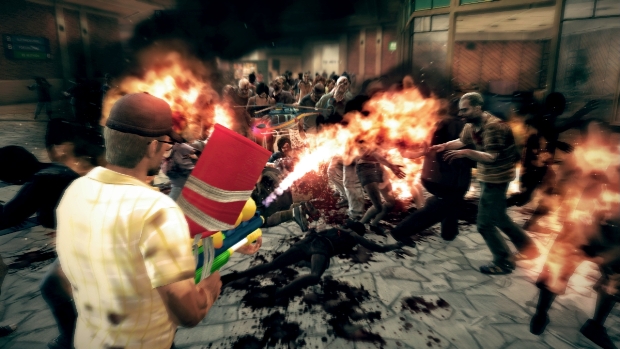 There are literally hundreds of weapons available

An online multiplayer mode should add some longevity to the proceedings long after Chuck and Katey have headed off into the sunset (assuming they both do!). Here you actually take part in the various events of the uber-violent Terror Is Reality show. Pit your wits and zombie-slaying skills against three other contestants in a series of inventive mini games. Win matches and you earn cash, which can be transferred to your save slot for use in the story mode – extremely handy for procuring that elusive and overpriced antidote. Each event is split into four mini games, culminating in a “Slicecycles” – where you have to ride a chainsaw wielding motorbike and slice and dice more zombies than your opponents! Particular favourites are “Ramsterball” (control a giant steel hamsterball, ram your opponents and flatten the undead), “Pounds of Flesh” (use your antler headgear to slice and dice zombies as quickly as possible – you must collect the most flesh to win so head for the fatter guys), “Zomboni” (drive your zamboni over the horde, grind up their gizzards and shoot as much blood n’ guts as possible into giant containers at the side of the rink) and “Stand up Zomedy” (dress the shuffling ghouls in as much crazy clobber as you can within the strict time limit).

All in all, it’s a thoroughly enjoyable package that should provide plenty of replayability. There’s no way you’ll see all there is to see in one playthrough, or manage to rescue everyone, defeat all the bosses or find all the weapons.

You could argue that there’s little that is different from the original – but I’d suggest that this is part of its charm. Issues have been addressed and new game modes added. The size and scale of the game is impressive, the graphics far better and the AI much improved. If you loved the original, Dead Rising 2 is highly recommended. If, however, the original just didn’t do it for you, this is still well worth a try because it improves on its predecessor in almost every way. Even though the market is oversaturated with zombie titles and game modes, Dead Rising 2 remains one of the most anticipated games of the year. Capcom’s effort is a must have for fans of the genre.

It's good looking and there's plenty to do. Being able to build hybrid weapons is a nice touch and adds a whole new dimension. The Terror Is Reality concept works well - and is good fun online. More save slots and no more photography!

Ultimately it is more of the same. Missions can become repetitive and the time limit element is still frustrating. Some of the psychopaths can be insanely difficult. You'll certainly be retreading the same ground over and over to progress.

Final Verdict:
SUPERB
Dead Rising 2 doesn't vary too much from its predecessor but that's part of its charm. The flaws of the original have been addressed and this time round, the multiplayer modes add some real longevity.
A copy of this game was provided by Developer/Publisher/Distributor/PR Agency for review purposes. Click here to know more about our Reviews Policy.