The Dead Space series has come a long way since its inception a few years ago, and we have seen a noticeable shift in the game design which has made it more accessible to newcomers. The studio, Visceral Games, had experimented with a competitive multiplayer component–which failed spectacularly–and have also made the series more action-oriented.

None of these are bad things–but in a way once people get accustomed to a certain formula it becomes difficult to accept new dynamic changes to it. Dead Space 3–the third game in the series–is what you call a classic survival horror game, sprinkled with action elements. Yes, there have been massive changes to the internal structure, specially with the addition of a co-op mechanic, but the multiplayer mode that we saw in Dead Space 2 doesn’t return here. 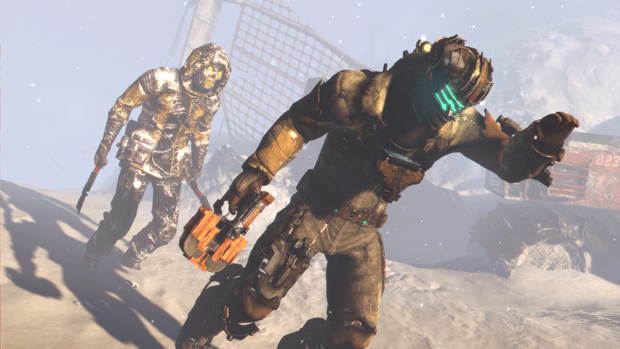 Isaac Clarke, the main protagonist of all the games in the series so far, has had a tough ride. He’s been battered, bruised, mentally tortured, and by that I mean who would want to be stuck in an abandoned space ship with undead enemies like the Necromorphs? He’s also a strong protagonist, and somewhere he’s also very, very likable, because he is also quite believable.

The third game takes you to planet Tau Volantis–a supposed home world for the markers. Of course, the plot is quite intriguing here albeit with a bunch of plot holes. Isaac and Ellie Langford–the woman he met in Dead Space 2–are romantically linked here, and she plays a vital role in this game. 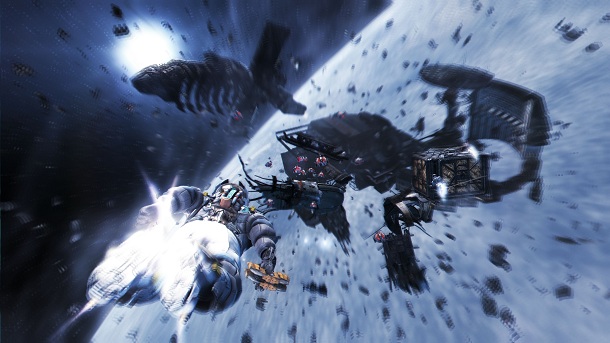 I really loved the beginning of the game at least up to chapter 7, where you get to do some space missions. It’s incredibly cool seeing a frozen planet below you as you hover around in style, doing fetch quests for everybody. I think that’s what Isaac has been reduced to in the three games–doing stuff for people. I guess it has more to do with the mission design, because these fetch quests can get incredibly boring as you start backtracking and doing the same monotonous things in the game.

Pacing-wise, the game is flawless. You can really play this in one or two settings and it’s quite a lengthy game too; totaling 18-20 chapters. That’s the main USP of these Dead Space games though, it really feels like you have to push on, find what’s going to happen. I think it rivals Resident Evil 4 as far as pacing is concerned. 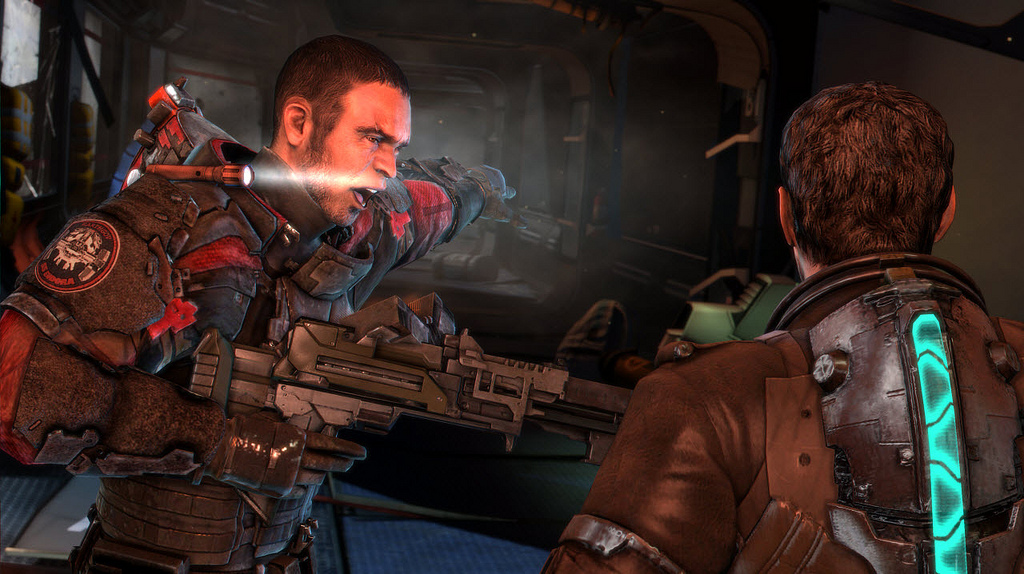 After messing around in Space, you finally land on the planet seeking answers and way to stop the Necromorph infection. The plot does get a bit convoluted near the end as you discover a lot of things that are not only intriguing but also feels tacked on. They could have handled it a bit better but the last few levels had a huge spike in difficulty and in a way I just felt like running around without taking enemies head on, in an attempt to finish the game and see what the ending is all about. 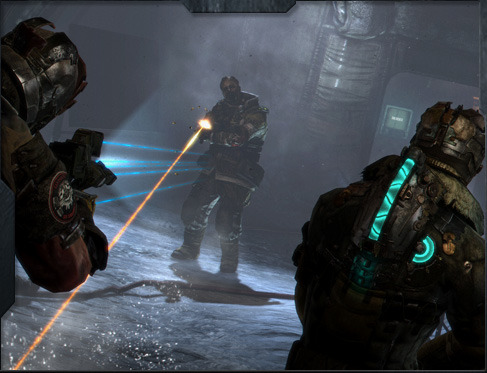 I really disliked the boss fights and the enemy variety in the game. For some reason, Visceral wanted you to show more expansive environments and fight more humans this time around. That’s what makes it a bit action-oriented, because I wouldn’t say they have abandoned the survival horror design completely. Some areas in the game were genuinely scary and it really felt like a solid survivor horror game.

You also meet those regenerating enemies early on in the game and after finishing that said level, Isaac was like, “Damn I hate those guys”, which is what I was feeling at that point as well. The enemy variety was a bit disappointing considering most of the Necromorphs you encounter in the game were in the previous games as well. You do encounter those skinny little guys who come at you in a group and can make short work of you, especially the darker ones later on in the game.

There is a new crafting system in the game which I felt was utterly pointless. You have to collect various resources and using that you can build new weapons, modify existing ones or create new items. It’s done with micro-transactions in mind as you can either use a bot to find all these resources, or just pay $1-$3 to get whatever you want quickly. The micro-transactions aren’t forced here as you definitely don’t need to spend money and can just play the game normally. 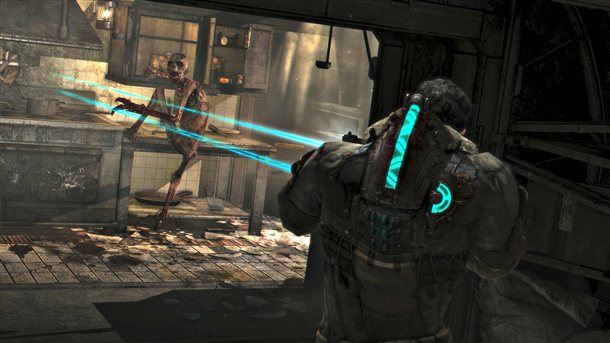 There are a lot of weapons you can create, and different combinations of them. On my playthrough, I only used the probe gun, which can fire electrified bolts at enemies, and can massacre any enemy in the game. You can combine two weapons in one by adding an upper and lower tool. For example, it’s possible to create a Line Gun and a machine gun, if you have all the resources for it.

There’s a new co-op mode in the game. It’s something that adds a lot of value to the game as you can your partner (Sgt. John Carver), can blast some enemies together. The game has to be played in co-op at least once because there are some side missions in the game which requires two players, and playing with a friend can make the fetch quests a lot more bearable. 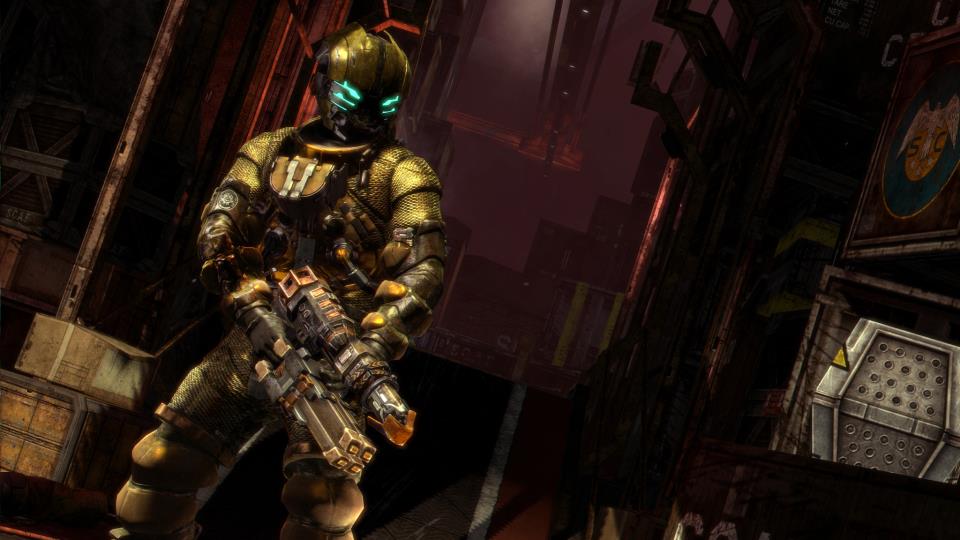 The game looks gorgeous and the interior environments early on in the game are nicely designed, but it’s the exterior ones like the snowy terrains of the planet that make it a bit more fun to play and you get to admire the scenery. A game like this really needs the sound design to excel, and Visceral has done a good job in that department. If you own a 5.1 sound system, the game will definitely make you feel a bit uneasy.

Dead Space 3 gives you a pure survival horror experience in some places, and also contains a lot of action-oriented elements. The core formula hasn’t been diluted a lot, and fans of the past game will get more of the same here, but with a few tweaks. Overall, it’s not something that really stands apart or pushes the genre ahead, but it’s a good game on its own and deserves to be played.

Lot of content. Co-op is fun. Sound design is amazing. The game looks great. Hovering around in space is exhilarating. Good pacing.

The plot could have been handled better. The enemies and bosses are underwhelming. The crafting system is pointless.

It's not something that really stands apart or pushes the genre ahead, but it's a good game on its own and deserves to be played.

A copy of this game was provided by developer/publisher for review purposes. Click here to know more about our Reviews Policy.
Tagged With: dead space 3, pc, ps3, visceral games, xbox 360