Dead Space – What The Hell Happened To It?

One of the best horror franchises of its time is now little more than a distant memory- what happened?

Fans of survival horror didn’t a lot of modern choices in the previous gaming generation. Resident Evil 4 had come and gone a few years earlier, and outside of a handful of mostly unremarkable underground experiences available here and there, which mostly limited to PC, its was slim pickings for us horror fans before Amnesia came out and revived the genre and elevated it to the glorious relevance we find it at today. But there was one game developer that saw that void and wanted to fill it with something special, so, in 2008, Dead Space blasted and dismembered its way on to the PlayStation 3, Xbox 360, and PC via Visceral Games. And visceral it was.

Dead Space featured a mix of gore, disturbing imagery, and just enough defencelessness to keep players scrambling for ammo which was always just plentiful enough to barely get us through the next encounter. Since Resident Evil 4 was the last great horror game in most gamers’ minds, Dead Space followed suit with the over-the-shoulder presentation that made aiming easy and fun but kept players close enough to the action to feel similar to a first person game. What made Dead Space an improvement over recent horror action games though was that the main character, Isaac, wasn’t a cop or a soldier of any kind; he was essentially a futuristic blue-collar worker who just ended up at the absolutely worst place at the absolute worst time, and had to fight his way out. Dead Space featured a relatively unique monster species that perfectly justified a wild assortment of variations and situations.

The game also increased immersion by displaying stats on or around Isaac within the world, eliminating the need for much of a hud at all. Dead Space never tried to be pure horror though, and definitely straddled the line between horror and action as many survival games do, but it did lean heavily in the horror direction contrasting itself from most similar games of the time. This was a delightful, horrific breath of fresh air for fans of the genre and Dead Space was greeted with great reviews and respectable sales. Much like those notorious Necromorphs, the Dead Space series kept coming back with a second and third instalment and even a couple of side-stories with books, movies and smaller games that were all generally received well with only descent emerging from some fans about the third game losing sight of what made the original so special. So why, after the series gained so much momentum in such a short period of time, did the Dead Space completely fall off the map? What the hell happened to Dead Space?

Part of the answer to this is probably embedded in that criticism of the third game I just mentioned. Dead Space was an overall solid series that did sell and review well across the board, but the once perfectly-balanced horror to action ratio did see a very slight gradual slide toward action through the main trilogy. In Dead Space 2 it was barely even noticeable as the mechanics and gameplay from the first game was almost entirely untouched outside of Isaac controlling a little snappier and ammo being made a little more plentiful. Isaac was more of a character in Dead Space 2 as well, and actually had dialogue, which some players liked as it made him easier to care about but others disliked as it de-mystified the tone of the game and divided focus away from the atmosphere. Either way, these changes, while subtle, did make Dead Space 2 feel a little more like a typical sequel than a return to the strange, cryptic experience of the original. Plus, the half-baked online mode reeked of Electronic Arts’ meddling, and while it was sort of fun for a short a while, it lost its appeal quickly for most and largely felt unnecessary. 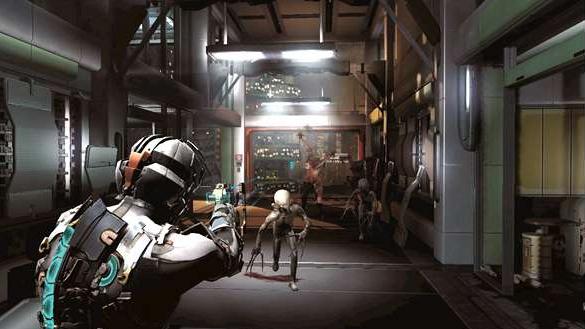 Dead Space 2 did add some nice variety in a lot of ways, but it came at the cost of some of the original’s enigmatic charm. while not preferable to a lot of fans of the original, this was ultimately an acceptable trade-off for most until Dead Space 3, or rather, the lead up to it. Ultimately, Dead Space 3 just continued on the trajectory that Dead Space 2 put the series on, with more action elements and tightening of the gameplay, but the fact that there would now be human enemies, which meant a cover system and straight up gun battles, was too much for some, and the lead up to 3 was riddled with complaints from disheartened fans who felt that the identity of Dead Space was all but completely blown out the air lock. And they weren’t entirely wrong about that. Yes Dead Space 3 looked like Dead Space, and sounded like Dead Space, and at times felt like Dead Space, but it just wasn’t Dead Space any longer.

Scavenger bots that would bring you resources, despite resources being the more prolific than ever, subtracted most of the scarcity and frantic scavenging element, and weapon crafting allowing you to arm Isaac to the teeth subtracted from the struggle to compensate for certain weapons’ shortcomings, so essentially what you were left with was a great action game set in the Dead Space universe. Dead Space 3 did succeed with an interesting online co-op mode that featured another character, Carver, who’s story was, in my opinion, far more interesting than Isaac’s was at that point, and its a shame that it couldn’t have been experienced by more players. The interesting extra story wasn’t enough though and all these elements just added on to the pile of reasons for fans of the original game to feel like the series had lost its way. The game didn’t sell or review horribly, as it wasn’t a bad game per se, but it was and is widely regarded as the worst in the series, and perhaps it made sense to put the series on ice for a while after that.

Unfortunately, during that while we saw a series of issues arise from Visceral Games. Their work on Battlefield Hardline was not well-received, and probably served as a proverbial strike 2 in the eyes of EA, as it was objectively a pretty boring uninspired game that most self-respecting battlefield fans have forgotten about by now. Not too long after that, rumors of a linear story-focused Star Wars game lit up many Visceral and Star Wars fans alike, but that also ran into trouble shortly. This unfortunately lead to the end of Visceral Games and even though EA still owns the Dead Space IP, now that the team is fragmented and the studio is gone, the likelihood of another Dead Space game is lower than it has ever been, and with each passing year it just seems to get lower.

That is more or less what happened to Dead Space. A very unfortunate outcome for all, as I’m sure many of the original team would love to have another crack at the franchise, perhaps to bring it back to its roots, it would probably sell well, pleasing EA, and fans largely still have love for the franchise and would probably take a chance on a fourth instalment. However, the fact that no hints or clues whatsoever have emerged in all this time, and we haven’t even gotten word of as much as a remastered collection, its looking like, as of now, if you want to dismember some Necromorphs aboard the Ishimura ever again, you’re going to need to fire up some older hardware.