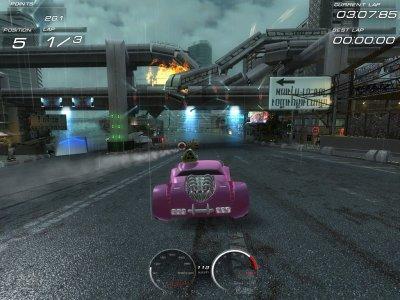 Death Track: Resurrection was released for PC last March, but according to the Entertainment Software Ratings Board, its on its way to PlayStation 3.

The game has been rated Teen, due to ‘Alcohol and Tobacco Reference, Fantasy Violence, Language, Mild Suggestive Themes’.

Here is the full summary of the games rating:

This is an action-racing game set in a futuristic, post-apocalyptic world. Players drive vehicles armed with machine guns, rockets, lasers, and mines through urban landscapes and race courses. Players earn cash rewards for outpacing opponents and destroying their vehicles. Laser and gunfire, explosions, and car crashes can be seen and heard throughout the game. Cutscenes sometimes depict female characters wearing tight, provocative outfits that expose a lot of cleavage. The word sh*t is occasionally heard in dialogue.

The presence of alcohol and tobacco is both explicit and heavily implied. For the tobacco, a cutscene depicts four separate images of cigarettes close-up on a table. As for alcohol (never explicitly named), the same scene shows a clear liquid being poured from a liquor-shaped bottle. This cutscene is stylized such that players can infer the bottle’s contents: frayed cigarette butts, portioned ritualistic serving, a “machine-powering-down” sound effect, screen blurring.

The game was published on PC by 1C Company, but the ESRB list the publishers as Gaijin Entertainment Corporation.