When talking about Death’s Door, comparisons with The Legend of Zelda are impossible to avoid, given just how much Acid Nerve’s action-adventure game borrows from Nintendo’s franchise- more specifically, from that classic Zelda formula that persevered for so long before Breath of the Wild came along and completely tore up the rulebook. As great as Breath of the Wild was though, there’s still ravenous hunger for that old-school Zelda experience amongst the masses, and Death’s Door is here to give the people what they want. The best part? Not only does it borrow plenty from the Zelda template, but unlike so many other games that try the same, it also does it very successfully. As someone who loves games like A Link to the Past and all the other games like it that it spawned directly or indirectly, I’m ecstatic about how good Death’s Door is.

In Death’s Door, you play as a crow employed by the Reaping Commission, essentially working a 9-to-5 job reaping souls of the creatures whose time in the world of the living has come to an end. When one of your jobs goes wrong because of an unforeseen complication, you’re forced to go back out there and fix your errors. But what starts as a simple mission to reap the soul that you were originally told to reap turns into a journey of much larger proportions- one that may very well end up changing the very cycle of life and death itself.

"As someone who loves games like A Link to the Past and all the other games like it that it spawned directly or indirectly, I’m ecstatic about how good Death’s Door is."

Story isn’t exactly front and centre in Death’s Door, but the narrative bones here are solid. Depending on how much you choose to explore at certain points in the game, you can uncover more flavour text to flesh out the story, which reveals some pretty interesting details, and though I wouldn’t go as far as calling it “captivating”, I would definitely say that I was pleasantly surprised at how invested I was in Death’s Door’s narrative. Of course, what helps is that the game is just overflowing with charm and personality, thanks to witty dialogue and an assortment of bizarre characters that are impossible not to adore- like a guy who has a pot for a head and is appropriately named Pot Head, or a musician who sings and write some pretty unforgettable so-bad-they’re-amazing songs.

Once you set out on your journey, from there, you’re basically playing a Zelda game- from the top-down camera to the dungeons-based structure, from the focus on puzzles and exploration to the lock-and-key metroidvania level design, Death’s Door wears its Zelda influences on its sleeve.

What’s striking about Death’s Door is how it instantly just feels great to play. The movement, the combat, the way it keeps building on its ideas, the simplicity with which it conveys so much through pure gameplay- it feels very old-school in its design sensibilities, and I mean that in the best way possible. The pacing here is immaculate, and you’re always constantly moving from one challenge to the next. Puzzles, (most) combat encounters, entire dungeons and areas last exactly as long as long as they need to, and do everything they can with their distinct themes.

What helps with that, of course, is the excellent level design. The dungeons and the areas leading up to them are all impeccably crafted, characterized by metroidvania-esque design that sees them looping in and around themselves. This means you’re constantly returning to areas that you’ve already been to, either because you’re backtracking or because the path you’re on just naturally takes you back there, and unlocking shortcuts to cut down the distances you have to travel in the future feels as satisfying as you’d imagine. If there’s one thing I can fault the game for in this area though, it’s that it has no map function. For a game that emphasizes exploration and backtracking in intricate and layered environments as much as Death’s Door does, the lack of a map is downright baffling. 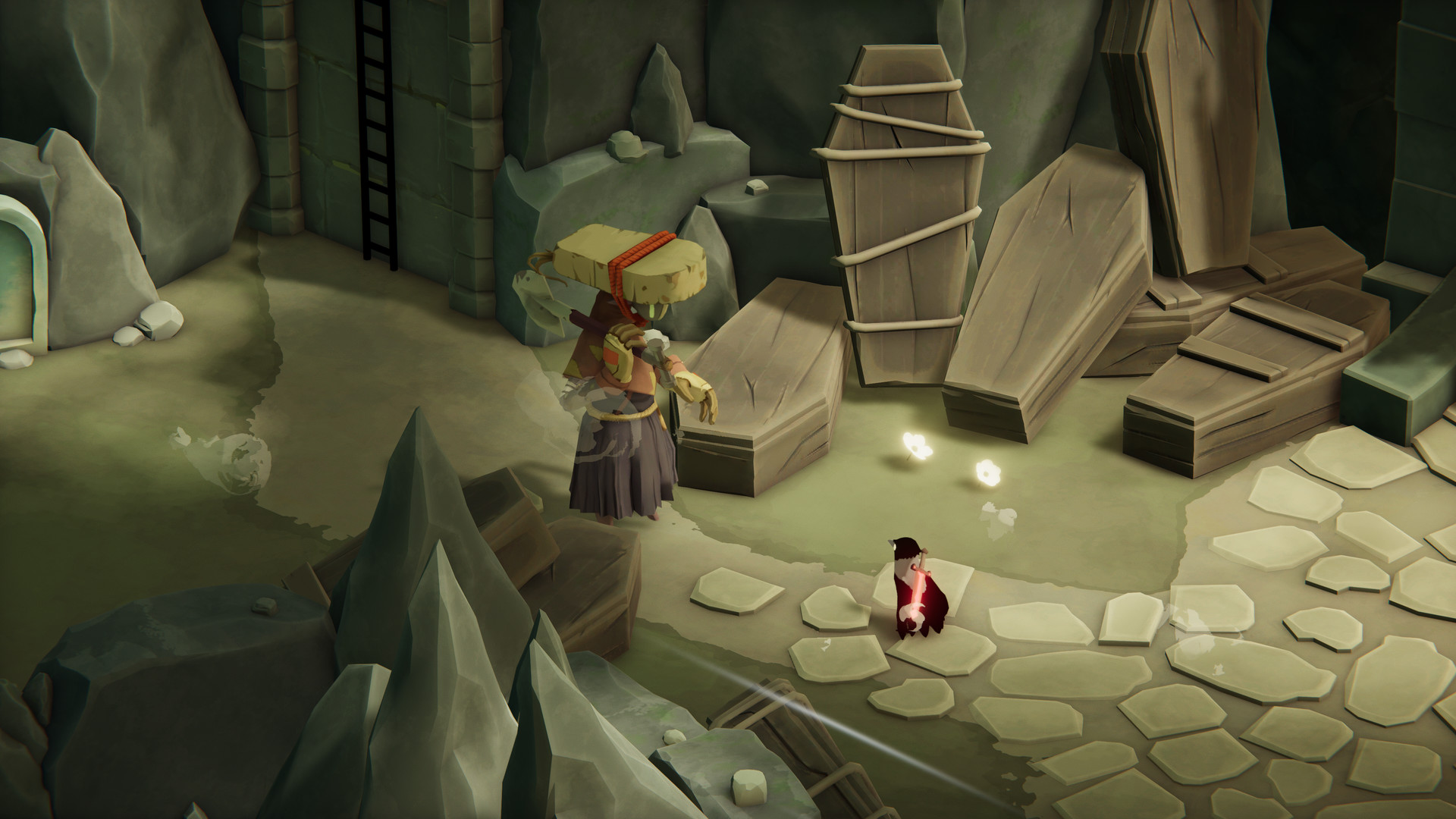 "What’s striking about Death’s Door is how it instantly just feels great to play. The movement, the combat, the way it keeps building on its ideas, the simplicity with which it conveys so much through pure gameplay- it feels very old-school in its design sensibilities, and I mean that in the best way possible."

Like Zelda games, Death’s Door also puts heavy emphasis on item-based progression, which means you’ll regularly come across spots in the world or in dungeons where you can’t progress until you’ve got a certain item. Something like that never fails to compel players to backtrack and explore, and Death’s Door is well aware of the fact- it leverages that technique time and time again, and does it quite well. Beyond that, things such as hidden collectibles, optional mini-bosses and combat encounters, and other rewards – such as new weapons – also constantly encourage you to explore every nook and cranny of whatever environment you find yourself in.

Alongside exploration, combat is the other big pillar that holds Death’s Door aloft, and it’s the very definition of simple yet compelling. Light attacks, heavy attacks, and ranged/magic attacks are pretty much the only thing you have at your disposal, which means that at its core, combat in Death’s Door is quite simple. But with an impressive amount of variety in the enemies you run into and the attacks and movement patterns they employ, and with how the game keeps mixing and matching these enemy types to constantly keep you on your toes, combat ends up feeling far more complex and nuanced than you’d imagine.

Archers that like to hang back, enemies that throw magic balls at you and like to teleport, brutes that like charging at you with a shield and a giant hammer, ape-like foes who like to jump around and throw a boomerang at you from afar, and of course, the set-piece boss battles- Death’s Door keeps introducing new enemy types at a steady pace, and it keeps finding increasingly devious ways to use them. Suffice it to say, combat encounters can get pretty tricky at times, especially when the game starts using environmental hazards, like lasers or moving platforms or crumbling bridges, and tricky arenas where dodging without paying attention to your surroundings can mean falling to your death.

For the most part, Death’s Door’s difficulty hits the sweet spot – more than a few times, I swelled with satisfaction after getting through a particularly challenging boss fight or combat encounter – but there are a few encounters in the game that end up feeling a bit too frustrating. They feel like they’re trying to brute force their way into being challenging rather than achieving that level of challenge with smart design. In these encounters, the game simply throws too much at you, and the pace comes to a grinding halt as you try repeatedly to get past a frustratingly designed encounter. The issue feels all the more aggravating given how perfectly paced the game otherwise is. 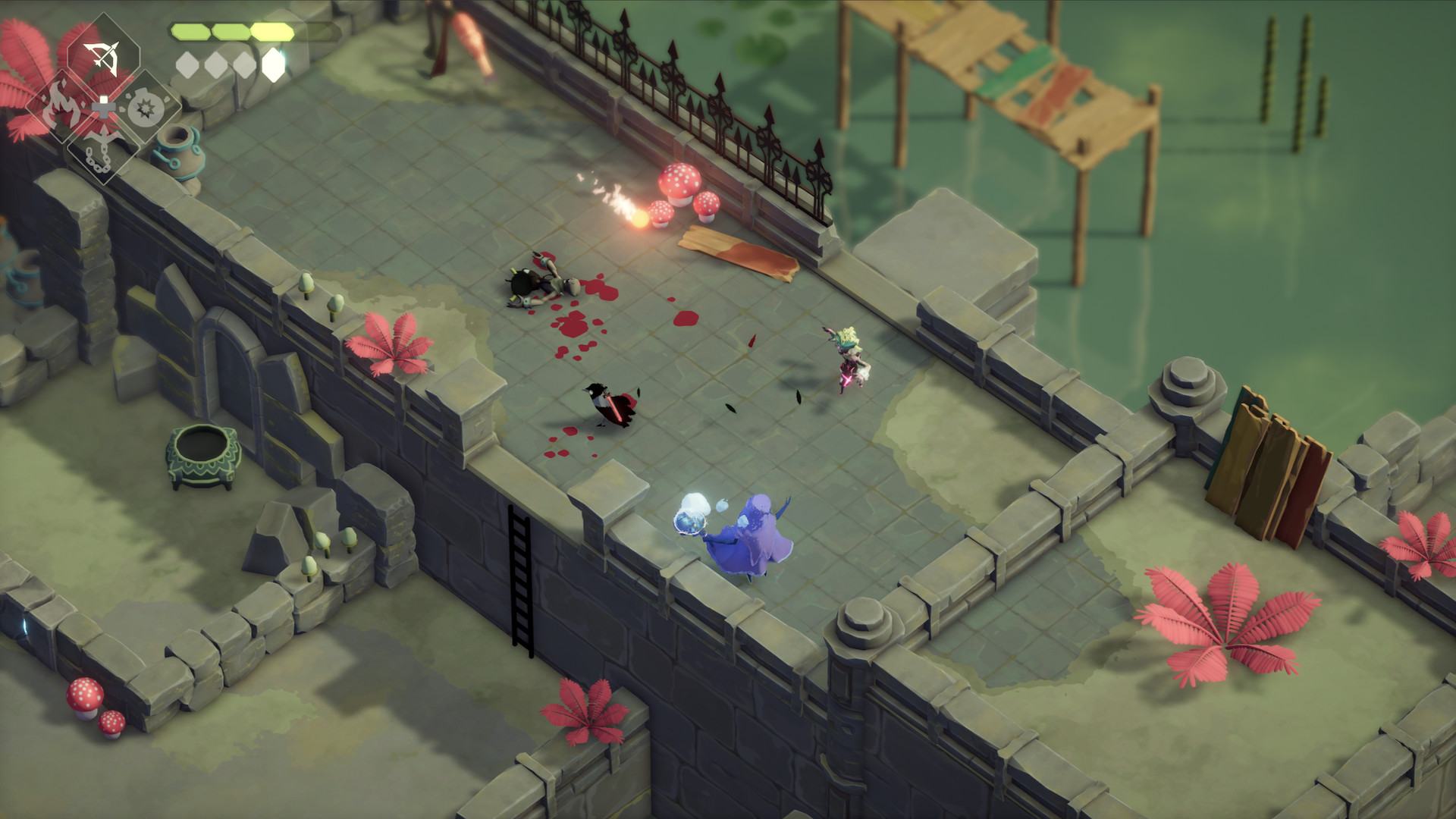 "Death’s Door keeps introducing new enemy types at a steady pace, and it keeps finding increasingly devious ways to use them."

While exploration and combat in Death’s Door are top-notch even in spite of a few niggling issues, one area where the game stumbles in crucial ways is the progression. Killing enemies gives you souls, while you can also net large quantities of them by finding soul orbs (which is another way the game encourages exploration), which you then spend in the game’s hub location on one of four different trees- but the rewards feel far too granular. On paper, things such as more attack power or greater speed to reduce the time between dodges sounds excellent, especially in light of how combat in Death’s Door functions, but the results don’t feel tangible. On very rare occasions did I feel like the souls I was spending were making any noticeable difference to my abilities. Mostly, I was doing better because I was getting better at the game – which is its own kind of reward, of course – but it’s disappointing that the system that does exist in the game didn’t engage me on a deeper level.

Death’s Door does stumble, but never so badly that its many immaculate strengths are overcome by its shortcomings. Excellent design, brisk mechanics, and a lot of charm make this feel like it belongs in the pantheon of Zelda games by any metric except for its name- and if you’ve been looking for something to scratch that classic Zelda itch, there’s no better game releasing on the market this month than Death’s Door to meet that need.

Final Verdict:
GREAT
Even with a few issues, Death's Door is a tightly designed, challenging game that does wonders with its classic Zelda-inspired formula.
A copy of this game was provided by Developer/Publisher/Distributor/PR Agency for review purposes. Click here to know more about our Reviews Policy.