Deathverse: Let It Die has some interesting things going for it, but it ends up sorely lacking in other elements.

The battle royale genre has been fairly played out at this point, with most developers having incorporated this mode in their major releases with little in the name of personality or distinguishing factors. That said, SuperTrick Games’ latest Deathverse: Let It Die has a lot of interesting ideas that helps it stand out from the barrage of similar titles in this genre, but a general lack of content at launch and other minor gripes come together to sour this otherwise promising experience.

Set in the year 2026, a natural calamity known as the Earth’s Rage has driven the population into a wild frenzy. Now, a violent and brutal bloodsport by the name of Death Jamboree is raging across television screens throughout the globe. Players assume the role of one such player in this very popular bloodsport as they try to make a name for themselves by winning matches and amassing fame. The story or the world-building isn’t anything interesting, but in a gameplay-oriented title like this one – this particular criticism shouldn’t come as any surprise. 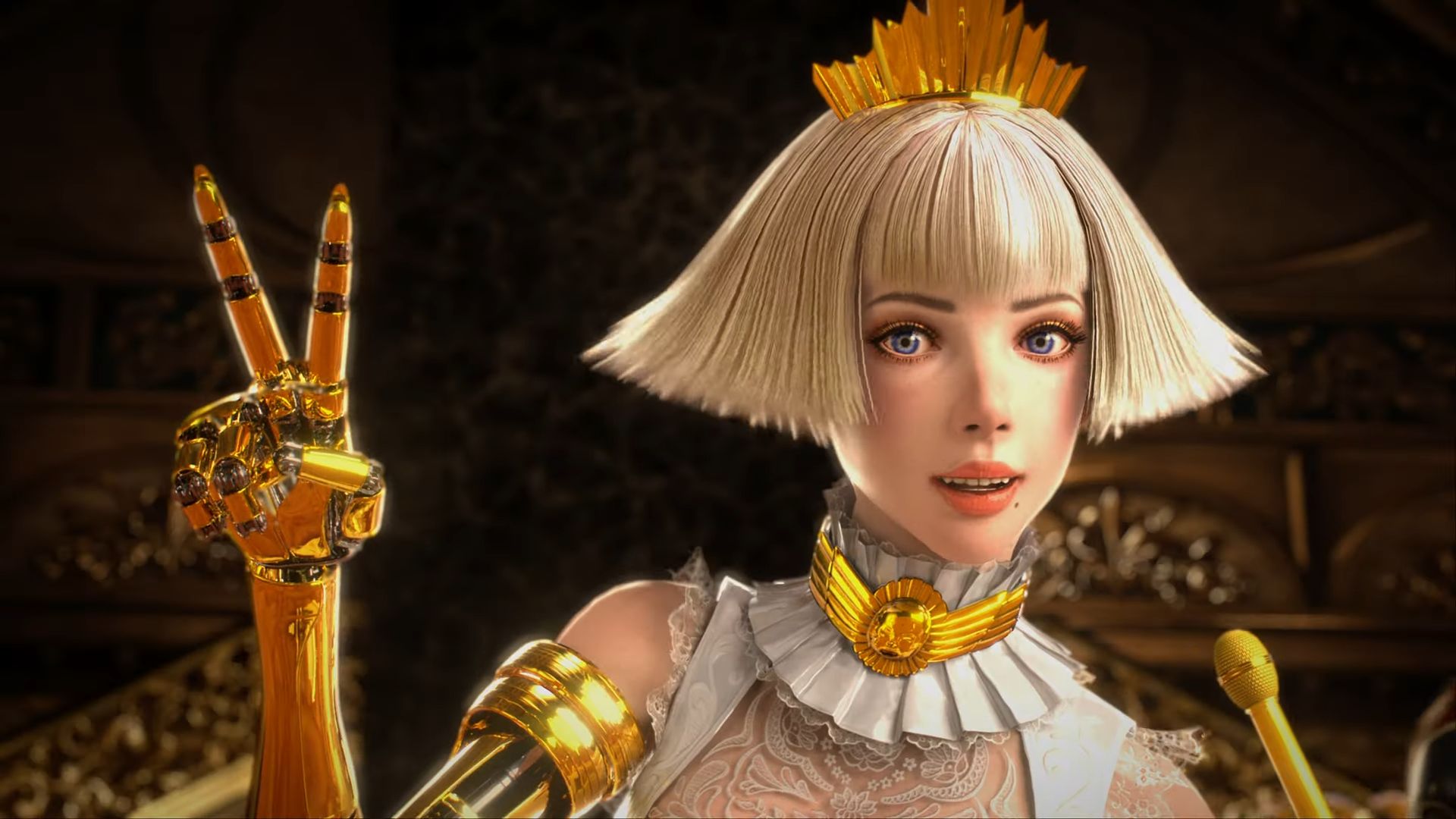 " The story or the world-building isn’t anything captivating, but in a gameplay-oriented title like this one – this particular criticism shouldn’t come as any surprise."

You start by creating your character by selecting from a bunch of options in the character creator, and following that – you are thrust into a tutorial that takes you through the basics of movement and combat. Deathverse: Let it Die is entirely based around close-range combat through melee weapons, and you have your general assortment of light, heavy, and special attacks. There’s also a shield that has a limited capacity for blocking attacks, and once that limit exceeds – you are momentarily stunned which leaves you open to critical attacks. You can also dodge, dash, and jump – and chaining your regular attacks with these movements opens up even more avenues for attacking your adversaries. In addition to this, there are a couple of special perks that you can pick up from the battlefield to get an edge over your opponents in combat.

SuperTrick has crafted a pretty potent combat system that strikes a fine balance between accessibility and depth. While it can take a couple of matches to get up to speed with the combat system and its many mechanics, it quickly becomes second nature afterward as you effortlessly start to chain moves and dodge enemy attacks. But a major issue with the combat system is that there is no lock-on system. While the game does adjust your perspective to align with the enemy, but with enemies being as mobile as they usually are – it can all start to feel finicky at times. The issue becomes even more pronounced when there are multiple enemies on screen at a given time. 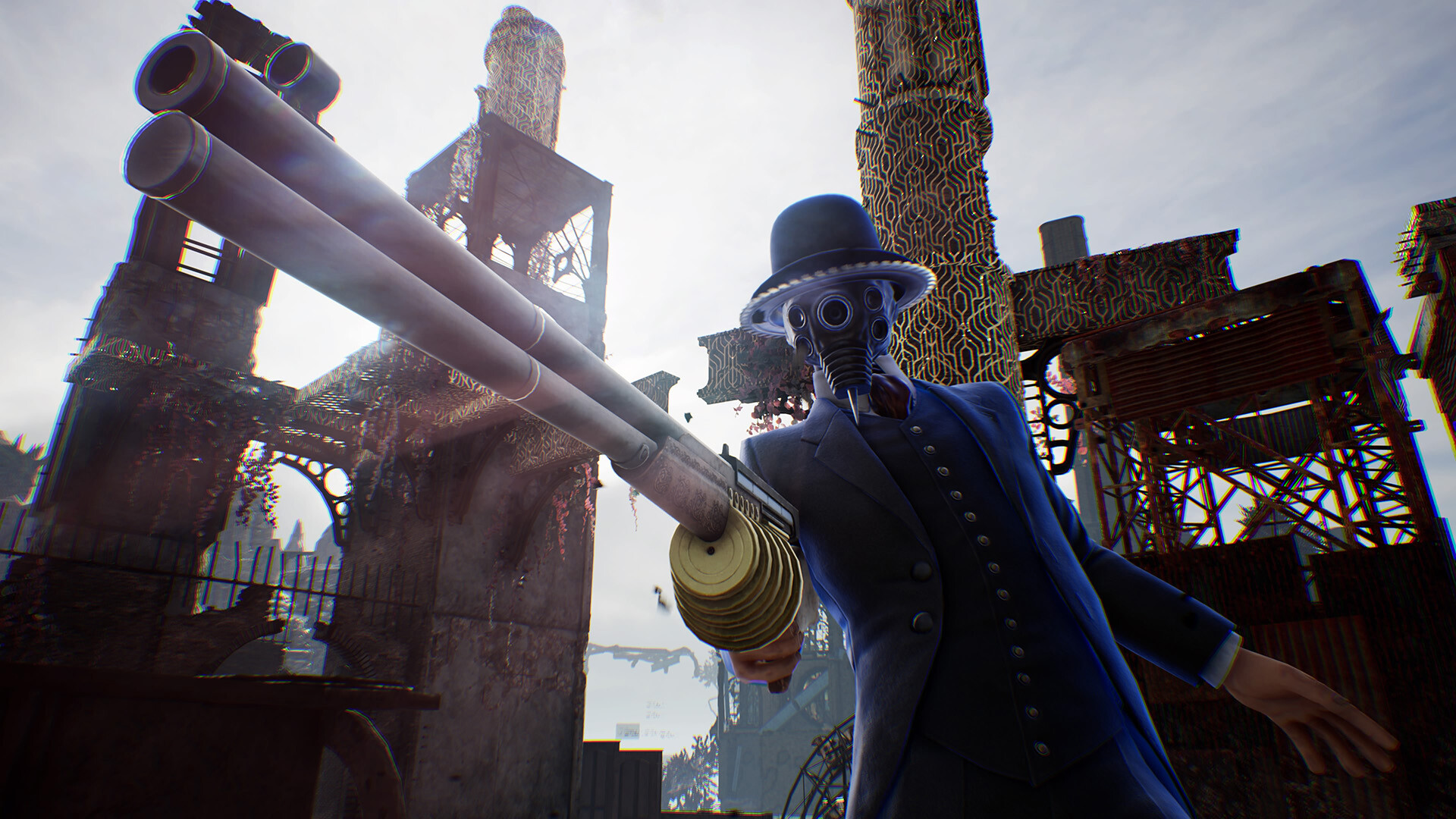 "But a major issue with the combat system is that there is no lock-on system. While the game does adjust your perspective to align with the enemy, but with enemies being as mobile as they usually are – it can all start to feel finicky at times. "

Deathverse: Let It Die features two types of game modes – a ranked and an unranked quick match. Both of these modes are based around Death Jamboree, the popular bloodsport which sees a total of 16 players dropping into a map as they try to survive up until the very end and hopefully, emerge victorious.

Each map is divided into multiple open arenas, and each of them is connected with others through short passageways and doors. As the match goes on and players start to fall, select areas start to get contaminated – which forces the remaining players to move towards the safe areas. Deathverse: Let It Die also adds a hunter player to the mix, which is an unkillable character that ruthlessly hunts the players on the field – which of course, requires you to stay out of its line of sight. You are free to use all sorts of tricks and strategies on the battlefield, ranging from hiding in bushes to all-out-frontal assault or intercepting two fighting players to anything that your mind conjures up. 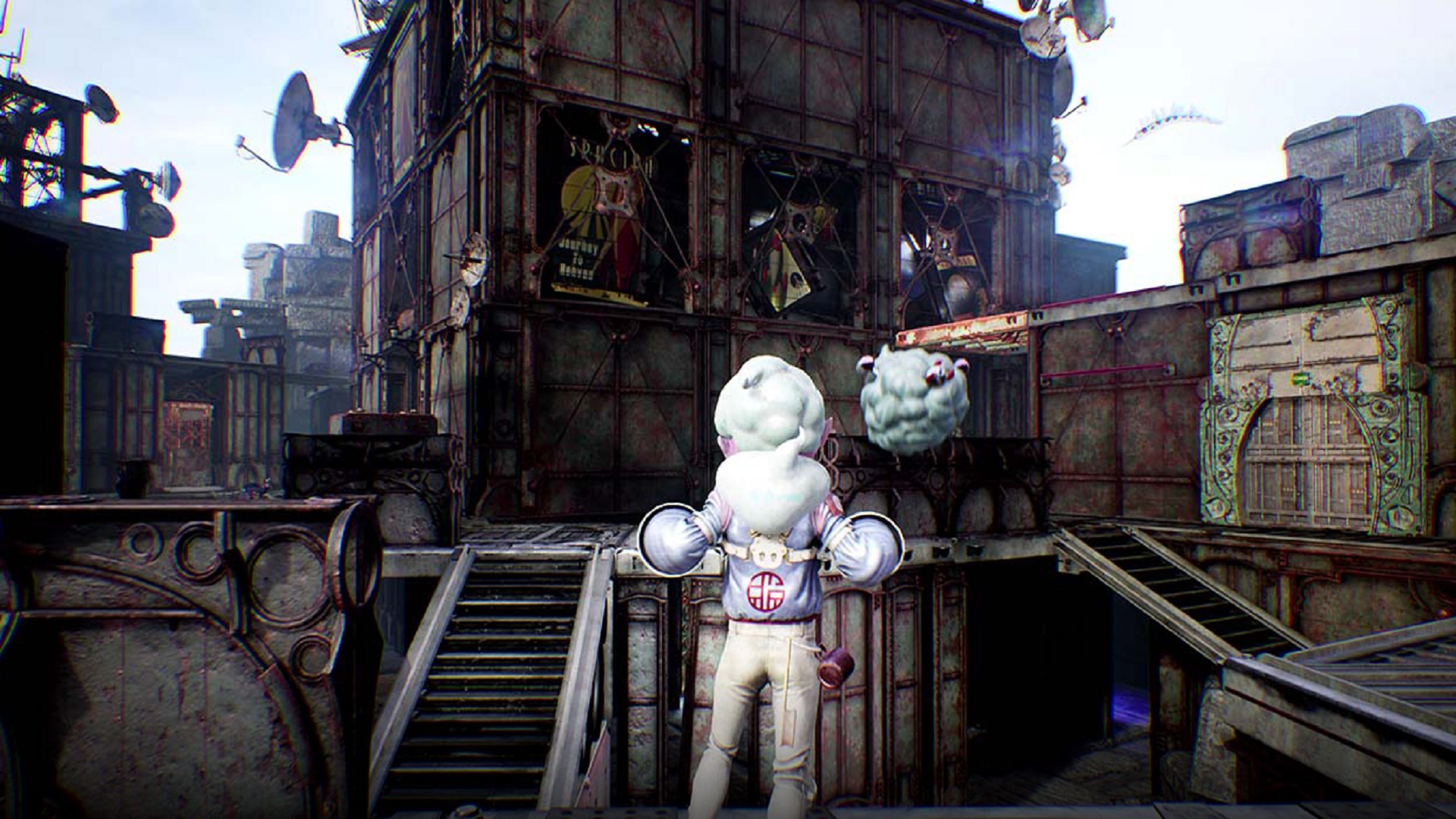 " You are free to use all sorts of tricks and strategies on the battlefield, ranging from hiding in bushes to all-out-frontal assault or intercepting two fighting players to anything that your mind conjures up. "

The maps themselves are also pretty distinct, both in form and function. Furthermore, the level geometry of different maps is well suited to a particular strategy. For instance, a particular map might have plenty of cover – so using stealth to pass out the time might be a better option for that situation. On the other hand, a second map might lend itself very well to aerial takedowns because it has a lot of verticality in its geometry. All in all, there’s decent variety amongst the maps. But you don’t get the option to select which maps you want to queue for, which can become frustrating after a while.

But apart from Death Jamboree, Deathverse: Let It Die doesn’t feature any additional game modes. It would have been great if there were some mini-games, any other team-based game modes, or anything in that vein. You can play the same game unranked match with your friends through an online invite, but that’s it. It’s very likely that SuperTrick may introduce new modes and ideas with future seasons, but at the moment – Deathverse feels pretty lacking in terms of content variety.

But thankfully, Deathverse: Let It Die has a decent progression system where players can unlock all sorts of cool things from weapons to materials to skins and whatnot. Using the currency gained from playing matches, you can craft all sorts of weapons ranging from buzzsaws to power gloves and katanas and other weapons. But you also need to have the required materials with you to craft these weapons, and they can be obtained by hunting animals and collecting resources found on different maps. But with no ability to select maps or farm these materials, crafting a desired weapon can become a frustrating affair. You can also gain currencies and other rewards by completing daily challenges, or you could also spring up real cash for a battle pass that works just like you’d expect it to. 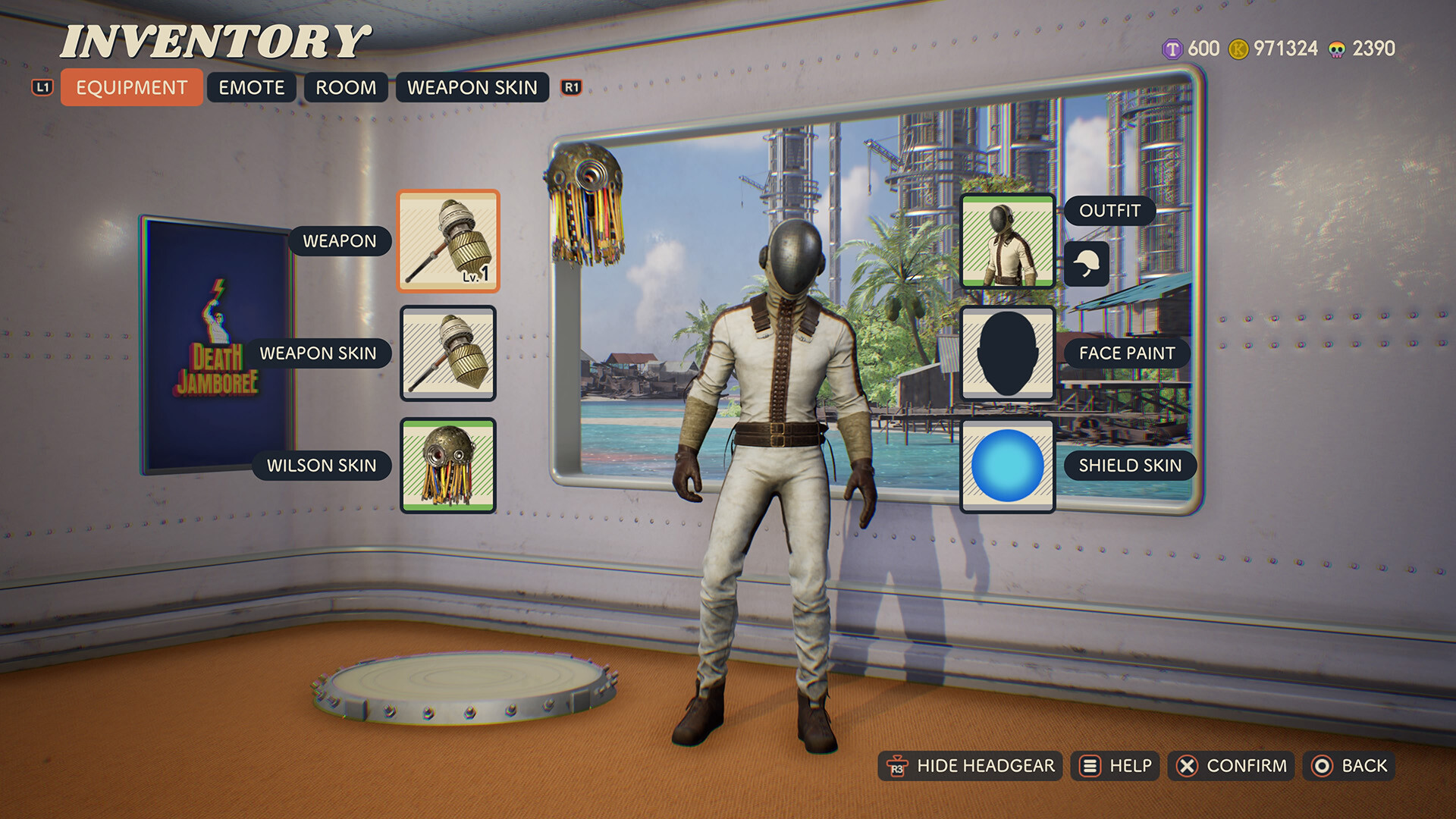 "But with no ability to select maps or farm these required materials for progression, crafting the desired weapon can become a frustrating affair."

Deathverse: Let It Die’s visual presentation isn’t anything to gawk at, but it’s nothing bad either. The game has a very bright color palette and abundant use of gold, and the character design also looks pretty unique, to say the least. The levels also use popping colours like red and maroon abundantly, and they look fairly good. Deathverse: Let It Die is a pretty technically sound game as well, and I didn’t notice any significant bugs or glitches during my time with the game. That said, I did experience a recurring connectivity issue whenever I logged in – which required me to reconnect at least two or three times before the game finally logged me on its server.

In conclusion, Deathverse: Let It Die is a solid game in this overcrowded market of battle royale games. SuperTrick has created a fairly decent combat system that strikes a good balance between accessibility and depth, and the gameplay loop is also enjoyable with varied levels allowing for different strategies. But everything surrounding that core gameplay loop – such as additional game modes and the ability to queue for certain maps are missing from the game at the moment. Furthermore, Deathverse’s progression system can also be frustrating to deal with at times. But at the asking price of absolutely nothing, Deathverse: Let It Die is at least worth checking out, and with some meaningful content updates and additions – it can become a great game on its own.

Final Verdict:
GOOD
Deathverse: Let It Die has a strong foundation in terms of gameplay, but it falls flat when it comes to content variety.
This is a free-to-play game downloaded by the author for the purposes of this review. Click here to know more about our Reviews Policy.