The setup from Avatar without the blue forced Native American allegories, with the general framework of an MMO and a very Borderlands aesthetic. Of course that isn’t very marketable, so Trion Worlds instead tries to get your interest in their new free to play MMO with “The next chapter in the Defiance Universe!” instead.

Of course Defiance 2050 is a follow up to the older Defiance MMO you probably didn’t play, itself a tie in to a Syfy TV show that you probably don’t remember. The most immediately striking thing about the game is how close it expects you to be to the source material. Within the opening cutscenes alone before I had even seen the painfully limited character creator, I was having jargon like Votans, EMC and Ark tech thrown my way. The game stops briefly to give knowing winks to what I assume are characters from the show, which falls totally flat to someone trying to be introduced to the universe. 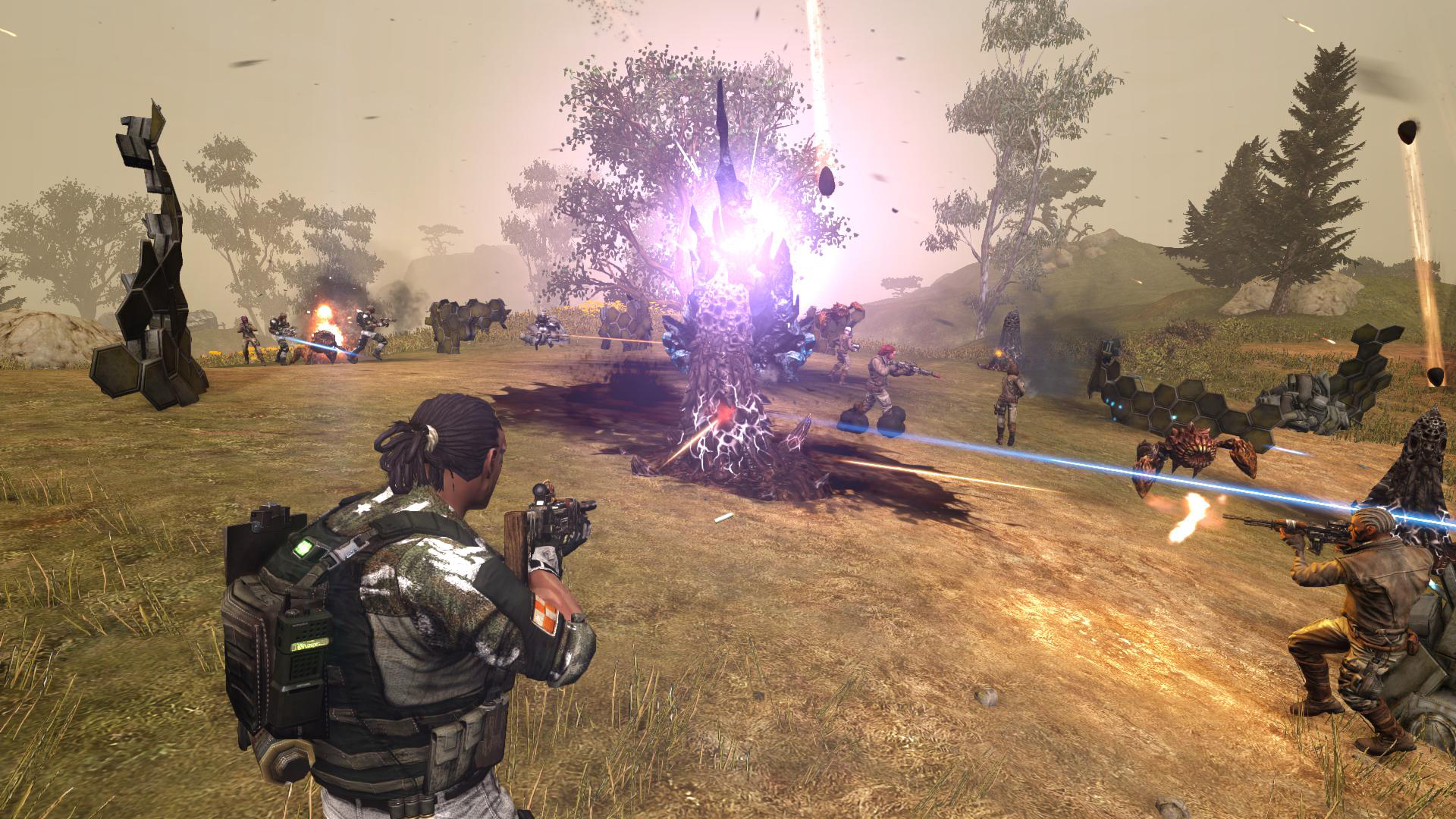 "When you glide right by the terribly done narrative and allow the emergent narratives created by the gameplay take hold, all the pieces are almost exactly in exactly the right places"

Compared to many other titles, even in the MMO space, the character creator is rather incredibly bare bones as well. Granted a choice between three races that amount to cosmetic differences on the same male and female rigs, you then have to click through different numbers to select your features. It’s far more obtuse than it needed to be, and restricts you putting yourself into the world. It’s not exactly a small part of the game either, that character you had to make compromises on sticks with you, thanks to a character creator that couldn’t even match something like the Souls series.

But the paper thin premise that just feels like a slapdash duct taping of Battlestar Galactica by way of Gearbox Software is probably one of my few gripes with the game. When you glide right by the terribly done narrative and allow the emergent narratives created by the gameplay take hold, all the pieces are almost exactly in exactly the right places. As opposed to the more esoteric MMOs where you’ll need to dance all over the keyboard, you’d be forgiven for mistaking Defiance 2050 for an open world third-person shooter where others happen to be around.

The main missions from the story move at a fairly brisk pace, and avoid the usual trope of going to find so many wolf scrotums for nameless NPC #23423 that so many MMO missions fall into in the early game. Within the first 30 minutes of play I had figured out my controls, and was mowing down a swarm of mutant soliders, scanning a valley to locate signs of life, and raiding a base that was suppressing a rescue attempt. Defiance keeps you active and moving, and always getting yourself into exciting new situations and biomes, which goes a long way to keeping the game from dragging. 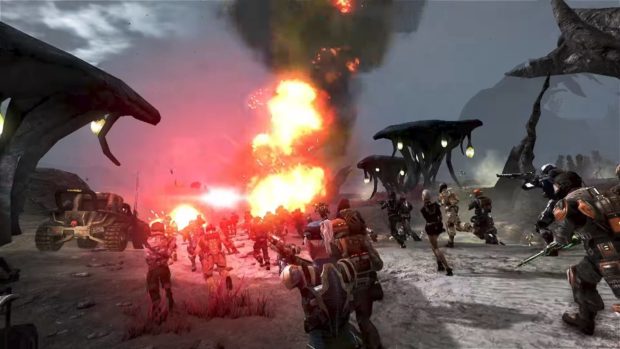 "Trion does have lots of balancing work to do with the weapons over the life of the game, a pistol really shouldn’t be a better damage dealing option than my grenade launcher"

The controls are far closer to a shooter than an MMO as well, which might be one of the few things that would help a player new to the genre stick around. Super smooth movement and aiming with the keyboard and mouse was comfortable and familiar enough to slip right into, and extended functions like changing load outs were natural. While like most PC titles, the controls are 100% customizable, I found everything was rather comfortably where I wanted it to be by default. The lack of the ubiquitous Gears cover system threw me for a loop for only a short time, before I would take to the dodge roll.

Of course, being an MMO, equipment is a huge part of the reason you get into encounters in the first place. Guns are varied and very fun to use, falling into a handful of classes and distancing themselves from there thanks to Borderlands-like modifiers to them that can work towards your play style. Trion does have lots of balancing work to do with the weapons over the life of the game, a pistol really shouldn’t be a better damage dealing option than my grenade launcher, but while the numbers floating out might not feel quite right, the shooting certainly does.

Being free to play, the game is of course smattered with lootboxes. Having received a pile of the boxes themselves as well as some of the rewards you can get as part of the review, I can confirm the promise of lootboxes remaining for cosmetic items has indeed been kept, with the rewards even looking rather nice. Of course, they are just cosmetic, but the win here is that you don’t have to partake. 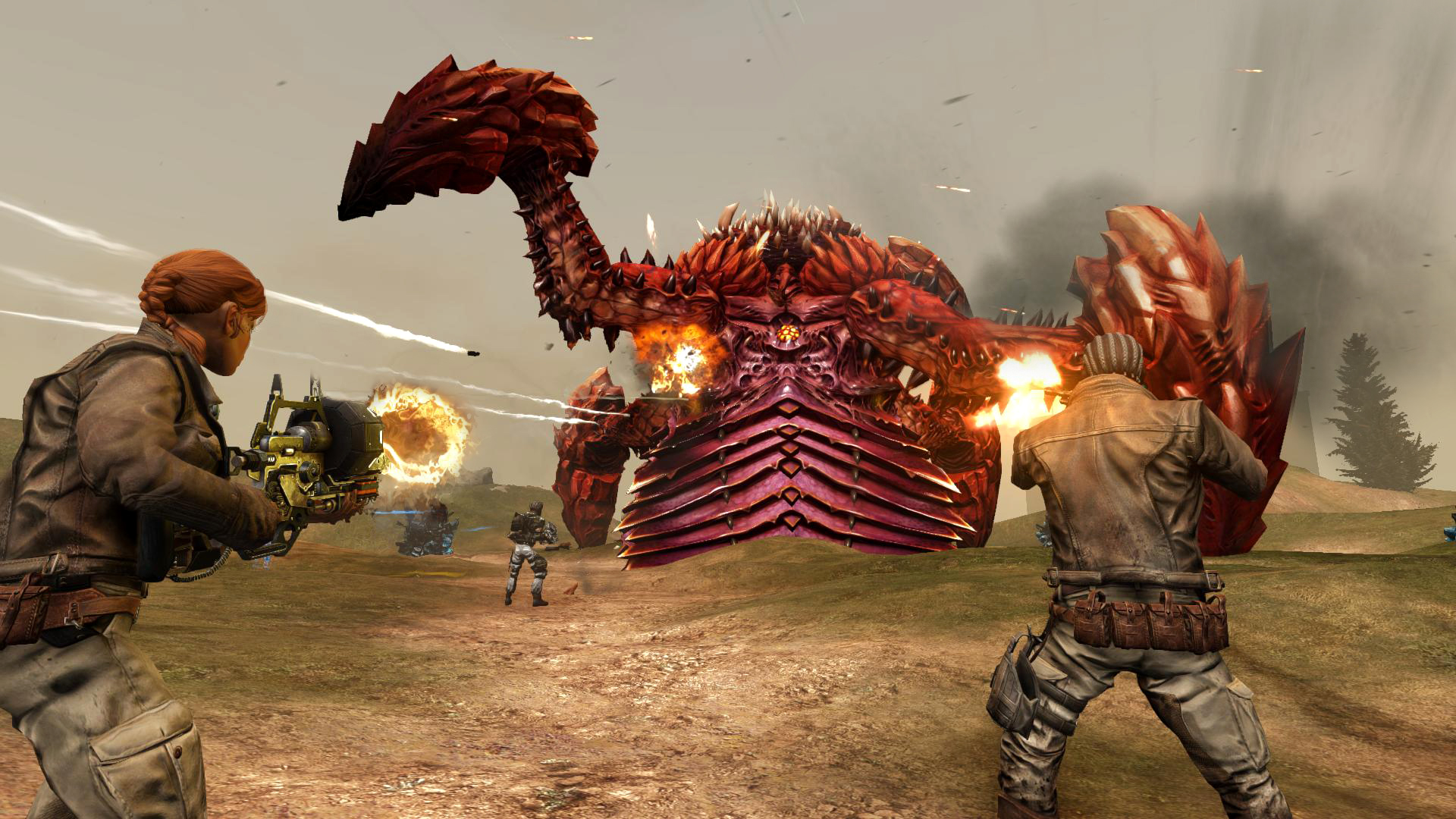 "There’s definitely a grip that the game has, though it’s hard to explain through all the small problems with it"

The whole game is tied together by a vaguely cel-shaded art style that thankfully isn’t afraid to inject a little bit of colour into the otherwise grim proceedings. Vibrant blues can fill a clear sky, and even the dirt leans a little brighter than the grime that so many shooters lean into. The character models aren’t winning any awards, looking pretty standard late era PS3 at their best, but they do the job. Visual options for resolution, character details and draw distance and other such deep options are kept from the player, which is disappointing. I can’t say the game is an eyesore, but it won’t push machines either.

Would I spend even more time than I have already within the world of Defiance 2050? There’s definitely a grip that the game has, though it’s hard to explain through all the small problems with it. As the kind of gaming junkfood that you can spend a few thoughtless hours on either solo or with some friends, grinding out some new gear, Defiance 2050 is a very decent ride for the price.

Very tightly designed shooting mechanics, controls and a well constructed pace keep interest and avoid MMO tropes. Lootboxes, though in the game, are not exploitative.

Certain features like the character creator are half baked, and the game leans way too heavily on knowing the lore of a show that last aired in 2015. Visuals are not very customizable. Weapon balance needs work.

Final Verdict:
GOOD
Defiance 2050 might lean too hard on players knowing a show that nobody was even watching in 2015, let alone now, but once you get past that, you find that the game is a very competent open world shooter wearing the trappings of an MMO. It’s nothing that’s going to change anyone’s life, but the price is right and the right people playing with you can turn the game into some great fun.
A copy of this game was provided by Developer/Publisher/Distributor/PR Agency for review purposes. Click here to know more about our Reviews Policy.