The Dawning on Rise of Iron, the newest update for Destiny is kicking off on December 13th and the first bits of information have been released at this year’s PlayStation Experience. For all of the fans who’d enjoyed the previous iteration of the Sparrow Racing League will be quite pleased with the newest installment as the tracks are about to launch again very soon. There will be new quests to go adventuring in, a whole bunch of brand new gear and different ways to compete in Strikes…it’s going to be a blast in the latest update.

Entering the tower will be a fresh experience as it will be set to a winter-holiday festival setting. Glowing, magical orbs will be lit up throughout the tower, snow fluffed all around, and glistening snowflakes to give the setting a more cheerful look.

Along with all of the glitz and glamour going around the tower there was more important matters to attend to. During PlayStation Experience 2016 Activision allowed us to give the sparrow racing a go on two brand new tracks for the first time ever, and, it was everything we expected

"In Shining Sands, unlike its snowy cousin the coarse terrain was not welcoming at any moment from. It looked deadly right from the start. Filled with traps and bad turns, I knew Shining Sands would be my grave."

With the two new tracks (and the same ones from last year) there will also be new variations of sparrows to choose from:

Hakkon Precipice Course – A winter wonderland track where not everything is as cheerful and bright as it appears. With steep and narrow winding roads, cavernous underpasses, and pine trees peppered all around, you’ll feel as though you were on a forest planet… of death.

Shining Sands Course – This wasteland of a planet is filled with junk like a spaceship graveyard. Great dunes and high plateaus formed on the planet’s surface show off the eccentric planet of a desert gone wild.

I tried Hakkon Precipice first. The snowy atmosphere made the environment feel safe and welcoming. When the race began it was anything but. Not only were my competitors trying to kill me right from the start (and they were physically sitting right next to me, mind you), tons of alien life forms were spread around each corner waiting for my to pass by so they could end my life. The steep climb up the mountain trails and tight corners left me with little room for error, and hitting those banks with a good curve almost always lands you near a speed boost port. These speed boost ports are key for those looking to reach maximum acceleration and it turns the track into an intense battle for control of who’s in the lead.

Near the end of the first pass, the level finished with what appeared to be objects that have walls and revolve around and around. They were undoubtedly there to end my rhythm, and they did, but luckily I hit a speed boost and got right back on track. At the end there’s a chance to take a split log and ride the smooth, but optional, alternate track above the trees without interference, it’s difficult to control on such a narrow path, but it pays off it you can manage it. I didn’t make it on the first try, as I flew right back down to ground level amongst the snow dwellers and rocks and was forced to weave my way through the forest and around the climbing road.

By the time I’d gone around the track for the third and final lap, I was a master racer. I was noticing different routes that gave certain advantages, shortcuts and easier paths that I clearly took advantage on. And when the log path near the end came, everyone fell down the hill and wove their path through the trees, rocks and snow, while I road high, right down the path and into a second place finish (I was racing against one of the developers, so second was as good as gold!).

In Shining Sands, unlike its snowy cousin the coarse terrain was not welcoming at any moment from. It looked deadly right from the start. Filled with traps and bad turns, I knew Shining Sands would be my grave. With plenty of speed boost ports immediately at the start, getting to the front of the line isn’t just an important factor, it’s key to winning. And not only do you have to hit every speed boost along the way, it’s also helpful to hope your opponent misses some of them — oh, and also be perfect when hitting the turns that can send you careening right into spaceship debris, or giant boulders. 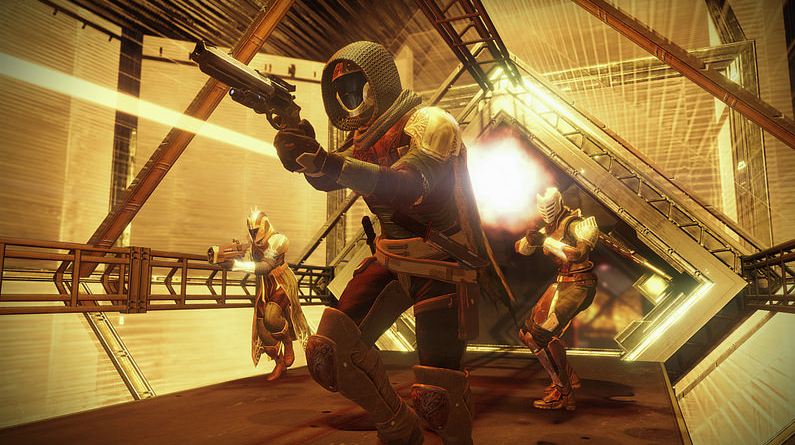 "Now, control wise, sparrow racing feels smooth and responsive. The handling of my sparrow was as precise as I’d have liked with little I would do to improve its performance."

With fun jumps through the smooth passes and deep drops following, Shining Sands makes staying in the lead one tough job. Much like the revolving walls of the Hakkon Precipice, Shining Sands also has some similar moments through its long tunnel areas that, if hit, can really hinder your speed.

Nearly halfway through the track there comes an area where much of the road is gone and its up to you to figure out what course to take where road still exists. It’s areas like this where falling down makes the situation feel that much more heavy. With nearly every pass done as best as I possibly could, I received another second place (right behind the developer) and it felt great.

Now, control wise, sparrow racing feels smooth and responsive. The handling of my sparrow was as precise as I’d have liked with little I would do to improve its performance. For racing aficionados, the depth of the sparrow customization wasn’t shown off at the show, and it will probably be minimal as it was in the first Sparrow Racing League from last year, with nothing more than color changes and whatnot.

Overall, the newest courses were fun and intense at times and should be an enjoyable experience for those looking to get back on track.