Diablo is one of the greatest and most impactful series ever made. It did for action RPGs what games like Grand Theft Auto did for sandbox games or DOOM did for first-person shooters. But while those series continue to maintain their relevance with new releases or consistent live service updates, we haven’t seen a new core Diablo in nearly a decade, and it seems like we might have a bit longer to wait until Diablo 4 finally hits shelves. In the meantime, Diablo 2: Resurrected is here to hold us over and celebrate the original’s 20th anniversary, and while its age shows in a handful of ways, it’s a beautiful, meticulously crafted remaster of the original that retains so much of what made the game so good with a handful of quality-of-life improvements that prove again why this game and this series are so successful.

Resurrected hits you immediately with the updates to its visuals, probably its most significant change. Cutscenes have been rebuilt from the ground up, and they look as good as any game’s cutscenes I’ve seen on the Xbox Series X. Granted, there’s only about half an hour of them total, since the rest of the story is told in gameplay, but it’s stunning what the cutscenes have become compared to where they were two decades ago. Visually, the rest of the game is upgraded as well. Improvements are naturally less obvious from an isometric perspective than in cinematics, but everything looks beautiful nonetheless. The way the environments evolve based on different times of day or sources of light, as well as the minute detail that’s gone into the different weapons, armor, or enemy types. Even from a distance, it’s easy to get lost in how good this game looks.

What the upgraded visuals magnify even more is how much variation there is throughout Diablo 2’s design, especially in character design. There are countless enemy types, some of which don’t even show up in every instance of an area, and they’re just as finely detailed and mesmerizing to look at. The seven different classes all look just as unique as well, both in the opening decision screen and in gameplay. The environmental design flexes its variation between acts, when you jump from the grasslands to the desert or you’re all the way down in the outskirts of Hell. Some of the dungeons are highlights, too, like the terrifying caves in Act 2 that are dimly lit, tightly packed, and filled with scorpions and spiders. It’s not as sprawling as other modern RPGs that are meant to hold your attention for thousands of hours with repeated updates, but there is still a huge amount of content here that you can spend dozens of hours playing and not see everything. 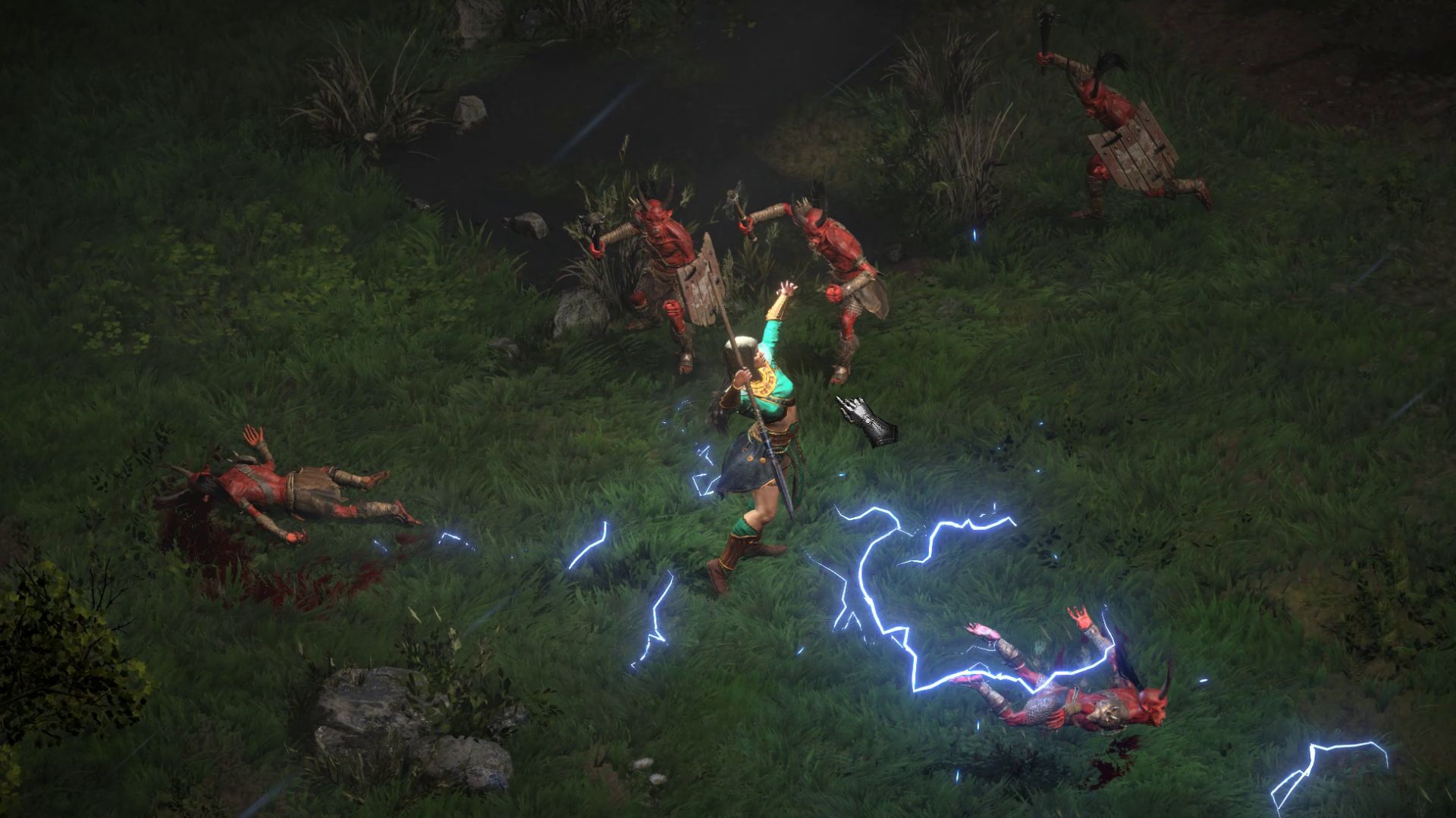 "Diablo 2: Resurrected is here to hold us over and celebrate the original’s 20th anniversary, and while its age shows in a handful of ways, it’s a beautiful, meticulously crafted remaster of the original that retains so much of what made the game so good with a handful of quality-of-life improvements that prove again why this game and this series are so successful."

Within acts, though, the level design begins to show its age, specifically because the game generates a new instance of each area every time you load into the game, creating a new layout and repopulating the area with demons. That means that unless you’ve activated one of the handful of waypoints in a certain area, quitting out of the game effectively erases your progress from that point. This design has almost come back around to being in style with the rise of roguelikes and procedural generation, but in this case it’s still more frustrating than anything. Losing all the demon-killing and layout-memorizing progress in an area is a disheartening step back, and in any mandatory dungeon, some of which can take hours, it’s a crushing blow to start back from level 1, especially when you lose it because the game lost connection to the servers, which happened to me more than once. The level design also shows its age in that many of the areas within acts look so similar. It’s the type of game where you may want to have a pen and paper handy to write down sequencing of different areas, since it’s as easy as a wrong turn to get lost and the minimap is passable at best.

But while I can nitpick all I want about level design, the gameplay is the reason so many people put hundreds of hours into this game, and for the most part, it has aged spectacularly with very few core changes from twenty years ago. Your class choice dictates a lot of what your experience will look like. Regardless of your class, Diablo 2 is a fantastic RPG, with so many different combinations of weapons, armor, and character skills that all feel almost equally satisfying. It’s common now to see loot-based games where some weapons are clearly more fun than others, but I was amazed at how consistently satisfying combat was in Resurrected, both in regular combat and against some of the grand and unique bosses. On top of that, it’s to this day a remarkably intricate game that requires your full attention. Demons have different weaknesses that your abilities and attacks can exploit, and totems scattered around each area can either give you a stat boost or refill your mana, health, or stamina. And for the first time, this is all playable on console, with a mostly seamless transition to many fewer buttons. Potions are mapped to the D-pad, while abilities can be activated by up to twelve different buttons or combos.

This all contributes to a very methodical, thoughtful experience. It’s very easy to lose track of your health or get overwhelmed by a horde of demons, but the game encourages you to take it slow, kill one enemy at a time, and absolve yourself of any shame in running away. Of course, if you lose track, this is also a brutally difficult game that can take your head off at a moment’s notice. Not only do you need to think of your current life, but you often need to plan ahead for a potential corpse run, thinking of the nearest waypoint, where you can place a portal to your base, or which enemies might be hovering over your body as you return unarmed. 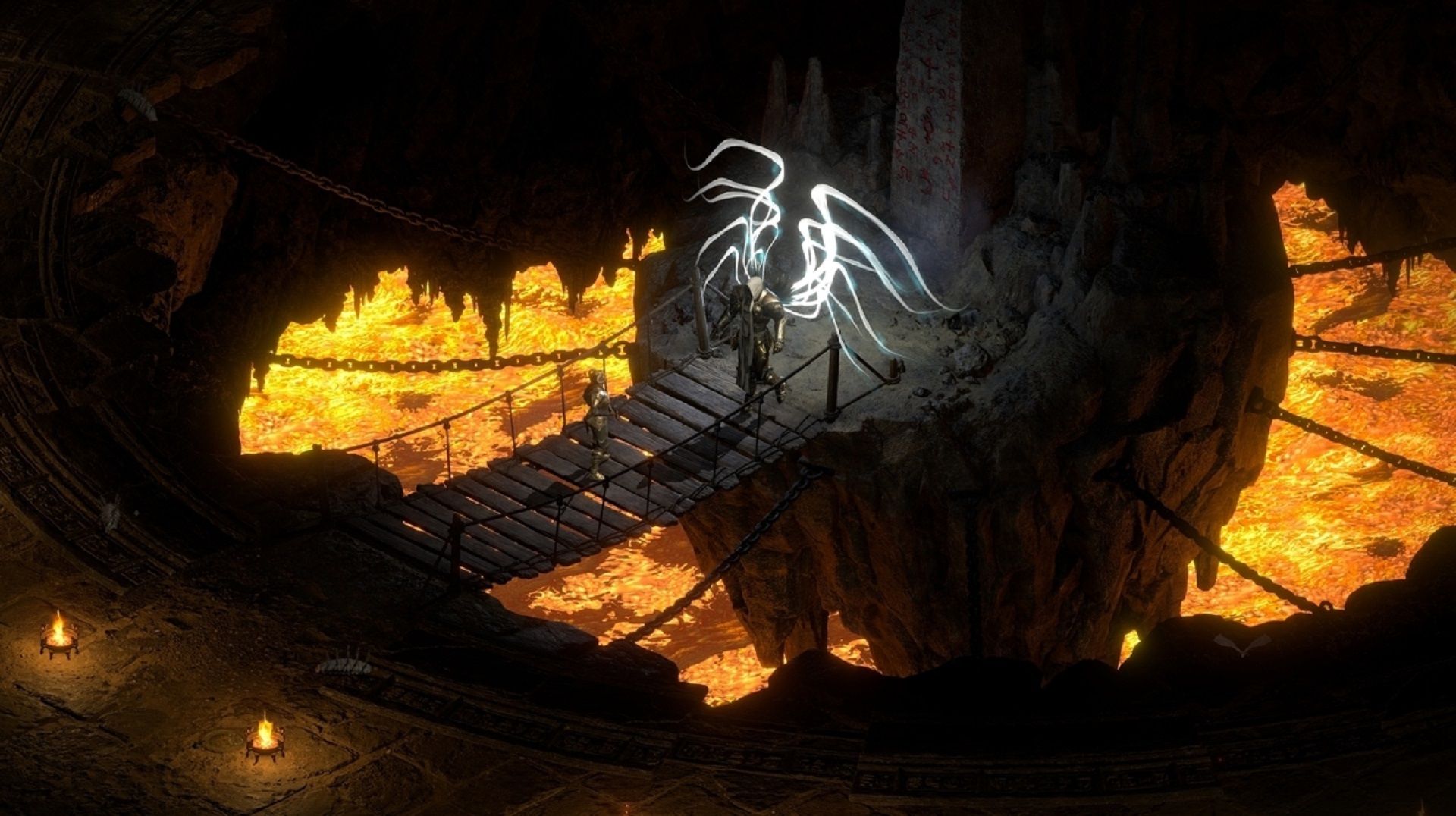 "Diablo 2: Resurrected is both a beautiful remaster of the original game and a stellar action RPG that, aside from a few aged details, could very well have been released today."

Every one of these gameplay mechanics saturates so much of modern-day gaming, especially in action RPGs, but it’s incredible to see how well Diablo 2 can still hold up against its modern-day peers. Still, there are some nitpicks I have that hold over from the original and show the game’s age. The point-and-click inventory management system is much less user-friendly on console than PC, especially with potions, which you often have to manually replace in your potions slot instead of having a dedicated button for each, which seems like an easy solution. The attack button and the interact button are also the same on console, leading to far too many occasions where I take damage or ultimately die because instead of attacking a demon I’m aimlessly opening and closing a dungeon door. Lastly, the amount of running through already-cleared areas becomes tedious, most notably in dungeons when you have to trek back down to a fourth or fifth level, and an ability to jump to the furthest uncleared level would be a quick fix that skips so much downtime.

Despite my nitpicks, though, Diablo 2: Resurrected is both a beautiful remaster of the original game and a stellar action RPG that, aside from a few aged details, could very well have been released today. Visually, both the cinematics and every detail in gameplay have been brought up to today’s standards with few drawbacks, and gameplay is as satisfying as most other games in the genre today. There are certainly areas where Diablo 2 is clearly from another era, but Resurrected brings it up to modern speed, and it can almost go toe-to-toe with its newer counterparts.

Final Verdict:
GREAT
Diablo 2: Resurrected is a faithful, meticulous remaster that shows just how well the original has aged.
A copy of this game was provided by Developer/Publisher/Distributor/PR Agency for review purposes. Click here to know more about our Reviews Policy.