It’s… pretty much exactly what you would expect.

Diablo 3: Eternal Collection is coming to the Nintendo Switch, making it the first Blizzard game to release on a Nintendo console in almost 20 years. Of course, given that context, plus the fact that Diablo 3 is generally one of the most popular games of all time, there’s a fair bit of excitement surrounding the release.

We still don’t know when the game is due out on Switch, since we have only been told it is some time later this year (I assume it is meant to be announced in the delayed Nintendo Direct presentation), but we do know what the box art for the game looks like, thanks to the game’s product listing on Nintendo’s site. It is exactly what you might expect it to look like, except it has this big old badge on it announcing the inclusion of the Ganondorf gear. It reminds me of the good old “featuring Dante from the Devil May Cry series” badge that was affixed on copies of Atlus’ Shin Megami Tensei: Nocturne. 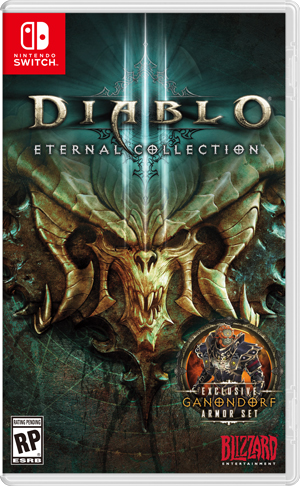