Digimon Survive has been a long time coming. Fans have been waiting for a new Digimon game ever since Digimon Story: Cyber Sleuth launched seven years ago. So it’s been a long wait, one fraught with repeated, multiple delays, a pandemic slowing things down, and even the game switching developers wholesale at one point. Now that it’s here, there are two things that are instantly clear: Digimon Survive is not the game many (maybe most) fans have been waiting for. It is also, however, very good.

The reason I say this is not the game fans have been waiting for comes down to what Digimon Survive is. Unlike Cyber Sleuth, which went on to become one of the most popular games the series had delivered in a while, and got a new generation of Digimon game fans on board, Survive is not a monster taming role playing game. It is very barely a role playing game, in fact. Primarily, Digimon Survive is a visual novel – and while it does include battles with your Digimon, they are very different from how they played in previous games (adopting a tactical, SRPG style system), and far more de-emphasized versus the visual novel sections.

What this means is that this is a far more narrative driven game, and that its gameplay flow is extremely different (and also driven by that story emphasis) as a result. For example, the bulk of your time is spent trying to observe and interact with your environment, and with the characters in it with you, making choices big and small that can have a profound impact on how things play out – from which characters you end up being closer to, to how your stats grow, to how your Digimon evolve, to even who lives and who dies (we’ll get back to this in a moment). The visual novel portions of the game are also where the bulk of the story takes place – while there are some cutscenes and anime-style sequences, the bulk of the story playing out is with some only slightly dynamic sprites juxtaposed on backgrounds, and text and voice doing the heavy lifting.

"Past Digimon games have touched upon some pretty dark themes, and even had some deaths – Survive ramps that up to eleven, with its horror story vibe and aesthetic. The story, which begins in a nice, idyllic summer camp that the main characters are attending, quickly shows its true hand, presenting a disturbing narrative which sees the characters you are with starting to crack under the stress they find placed on themselves as they attempt to survive, their sanity slowly unravelling."

Suffice it to say, given this emphasis on the visual novel side of things, it becomes paramount for Digimon Survive to nail the execution. And happily enough, it does. This comes primarily down to the strength of the story. Unlike the Pokemon series, to which Digimon has often been compared (for often superficial reasons), Digimon media generally isn’t afraid to get dark with its narratives and plots. Past Digimon games have touched upon some pretty dark themes, and even had some deaths – Survive ramps that up to eleven, with its horror story vibe and aesthetic. The story, which begins in a nice, idyllic summer camp that the main characters are attending, quickly shows its true hand, presenting a disturbing narrative which sees the characters you are with starting to crack under the stress they find placed on themselves as they attempt to survive, their sanity slowly unravelling. As mentioned previously, these characters can die – and who does and does not will ultimately depend on the choices you make, and sometimes even the order you make those choices in.

The writing is top notch, and instantly sells the atmosphere and tone that the story is going for. This is a story about trauma, about the sinister undercurrents behind folklore, this is a story about how bonds and friendships can be tested under strenuous circumstances, and yes, it is a story about survival. These are the kinds of themes that it is easy to get wrong, and get too hamfisted with, but Digimon Survive does an admirable job of telling its dark story without ever going overboard, thanks to its writing. There are occasions where it does veer into seeming slightly too “anime” or too convenient – but on the whole, Digimon Survive’s writing is a big part of why the story works, and why the game strikes the chilling aesthetic and tone that it does.

But arguably equally important to the story’s triumph in these regards is the art style. Digimon Survive is not a graphical showcase – it’s a visual novel with largely static images for a lot of its play time, and it’s not even fully leveraging the power of the last gen hardware that it is available for. But the art style is absolutely fantastic, instantly conveying the idyllic but eerie nature of the locations you find yourself in, and the horror that you encounter in these places. Characters and environments all feel incredibly expressive, and end up establishing an incredible sense of place – fully immersing you in the game and the story, and where it takes you (literally and figuratively). 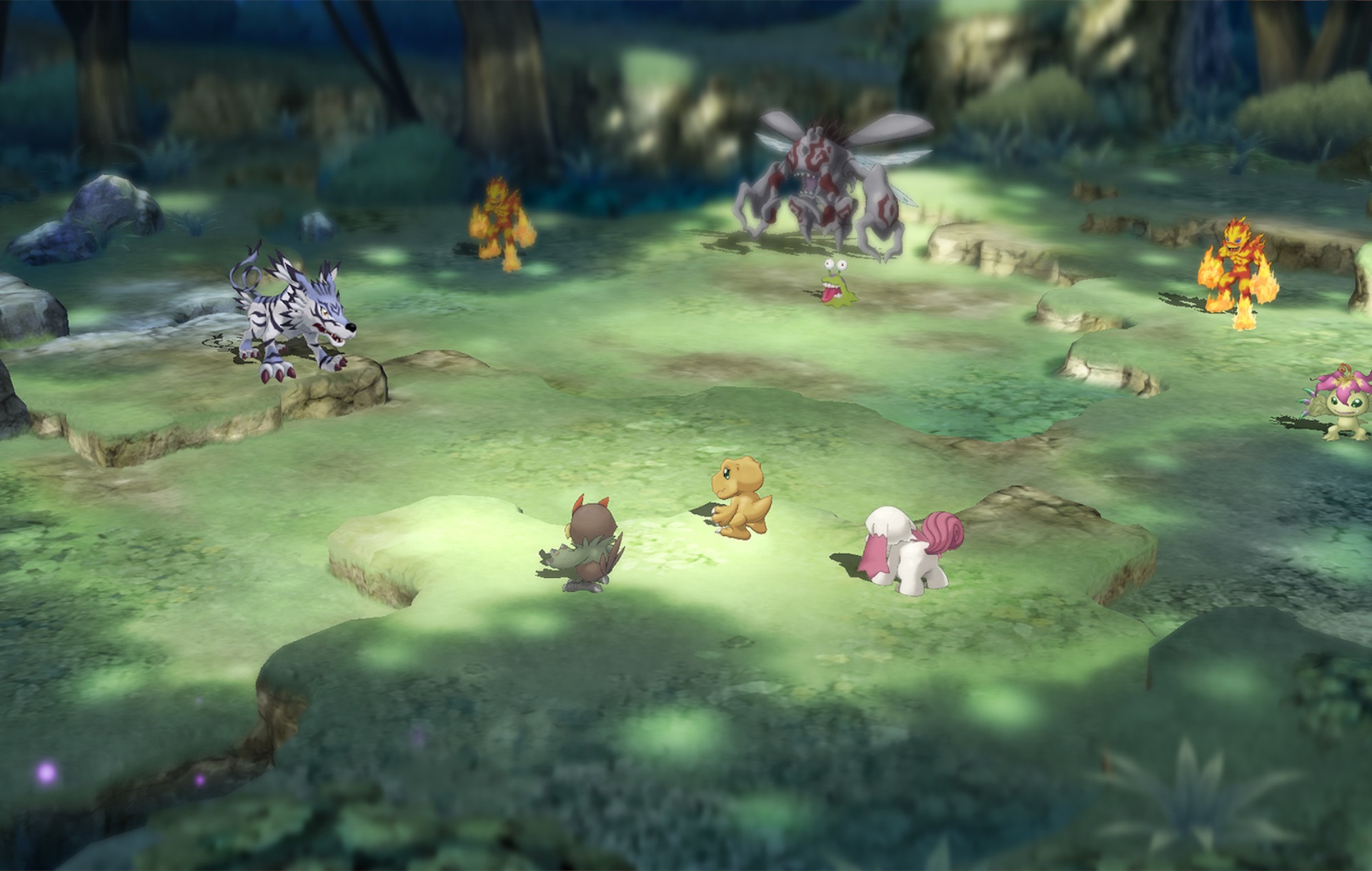 "This is very clearly not a follow up to Digimon Story: Cyber Sleuth – but honestly, given how well it turned out, I am okay with that."

The big stumbles the game makes with this storytelling focus feel like they were largely avoidable (which makes them more frustrating to begin with). For starters, the game lacks an English dub (or a voice track in any language but Japanese), which is definitely a huge bummer. The Japanese voice acting is great, don’t get me wrong, but Digimon as an IP is big enough to be afforded English voice acting for a global release (which this is), and the lack of that only adds a layer of friction to being able to immerse yourself in and enjoy the story.

The other issue with the story is the pacing; once it picks up, it’s almost impossible to put down, but the starting few hours can be extremely slow – they are, in fact, so slow that it can be a good couple of hours before you have your first non-tutorial battle (we’ll get to battles in a second). While all of this is ultimately additive to the tone and aesthetic, as well as the character payoffs, that make the story of Survive so compelling, there must have been a better way to do it that felt less soggy at the outset.

The battles themselves are fairly straightforward affairs. If you have played any grid based tactical role playing game, you’ll know how they play out. Digimon Survive does mix things up by taking cues from other games – for instance, while recruiting new Digimon involves you talking to them and trying to answer the questions they pose to you to your liking (so basically, like Persona).. The battles are well balanced, and managing your build, skills, and load out to try and do well in each can become wildly compelling on its own (and is probably the closest to the RPG style that fans of some of the previous Digimon games may have been looking for). These battles are very clearly not the point, and extremely de-emphasized in this game, but when they take the stage, they are great, and feel every bit worth it.

As I said at the start of this review, Digimon Survive is excellent, even if it is not the game that many may have been looking forward to or hoping for. Players who approach it with an open mind and take it at its own merits may find much to love here, from the unique story to the striking atmosphere, to the sheer deployability that the game’s divergences in how the story plays out can afford. This is very clearly not a follow up to Digimon Story: Cyber Sleuth – but honestly, given how well it turned out, I am okay with that.

Great story, with a very cool and unique horror story atmosphere; strong writing, great art style, and an immense sense of place; the battle system can be engaging.

No English voice acting; the story pacing can be off, especially in early hours; battles may be a bit too deemphasized for many's liking.

Final Verdict:
GREAT
While it is wildly different from Digimon Story: Cyber Sleuth, Digimon Survive makes a strong and compelling case for itself on its own merits. Fans of Digimon looking for a strong story, or fans of visual novels, will find the game to be a treat.
A copy of this game was provided by Developer/Publisher/Distributor/PR Agency for review purposes. Click here to know more about our Reviews Policy.