Against all odds, NIS have managed to put out a new Disgaea game. However, their catastrophic brushes with bankruptcy and the turbulence the Japanese publisher has undergone the last few years have definitely affected the final product, and Disgaea 6 ends up coming out very distinctly diminished as a result. It’s still Disgaea, which means the core formula that has captivated fans across the globe for two decades is still present here – but a lot of things surrounding it have taken a hit, often when you wouldn’t expect them to have. It’s clear that this is a product of a troubled birth, on top of the trials and tribulations that come with the territory of a transition to 3D – which, yes, this game marks the jump from sprites to 3D models for the very first time as well.

The story and storytelling remain charming and quirky, with loads of the type of snappy dialog and sharp writing that has made these games so consistently successful over the years. The game has some fun with its own premise, and Zed makes for a delightful narrator of his own adventures, particularly since he keeps subverting expectations with his recounting of how things went down several times over. If the charm and humor of the series is what you play Disgaea for, you’ll be happy to know Disgaea 6 delivers on that front. 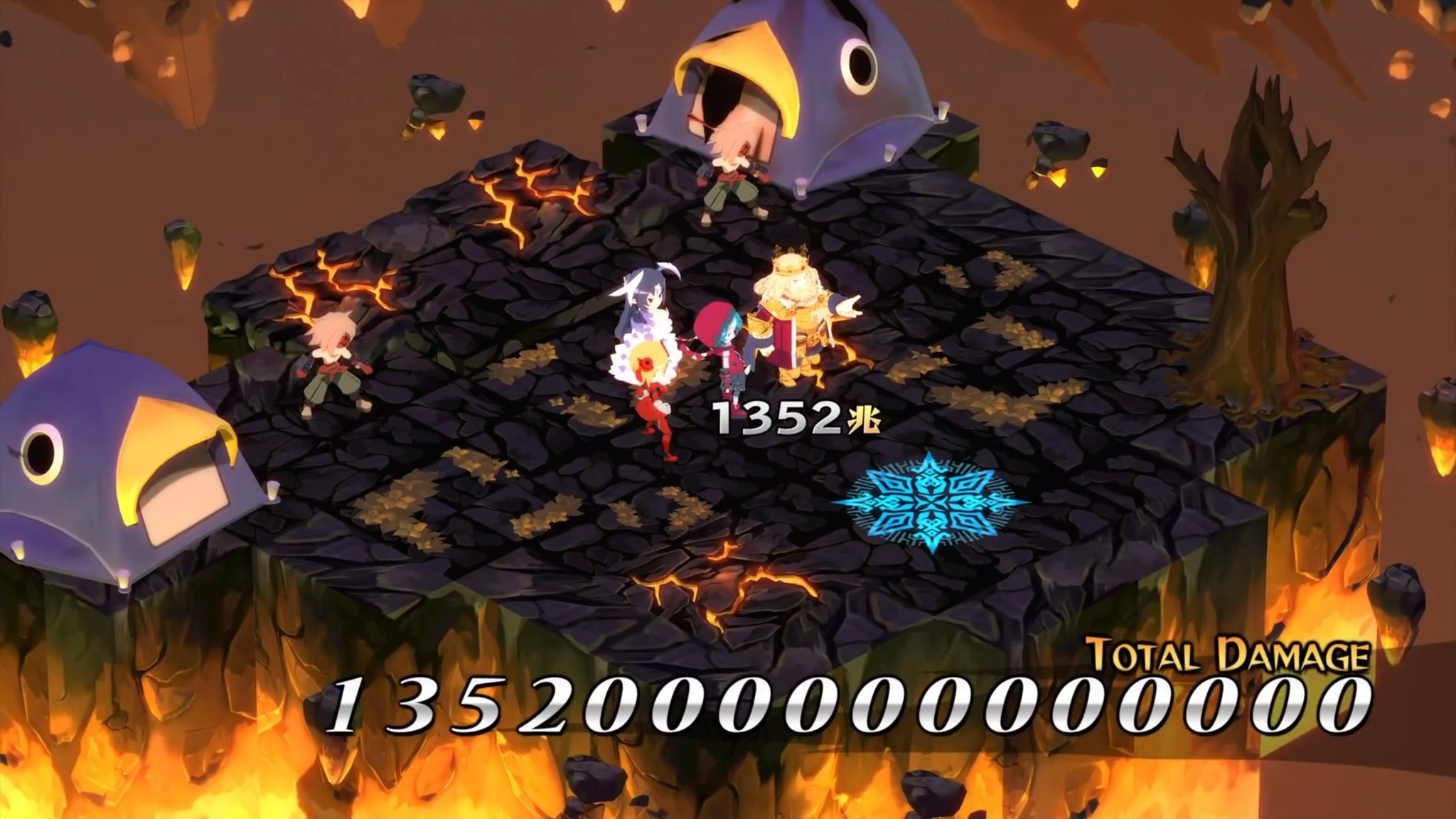 "If the charm and humor of the series is what you play Disgaea for, you’ll be happy to know Disgaea 6 delivers on that front."

It’s elsewhere that the game seems to have suffered, and most of this seems to come down to the troubled development cycle discussed earlier. This is most apparent in the switch the series has made to 3D models over sprites, and how they have impacted things across the board. A very obvious example is Special Attacks now being canned animations that cut away from the field, with the only visual effect for them that you see on the field being the number representing the attack’s effect (whether damage or heal or buff or otherwise). It’s obvious in the amount of classes that are gone – presumably because NIS simply could not have them done in time or with the money on hand. Even obvious attack animations feel far more generic and less exciting than you might remember. The game’s attempt to counter this is to make the numbers on screen bigger – so the new level cap, for example, is 99,999,999, up from 9,999 in older games, and damage scales up to ridiculous numbers as well. But the law of diminishing returns kicks in, and effectively, soon enough, a 99999 damage attack just feels like a 999 damage attack in an older game.

There are cutbacks elsewhere too. A lot of systems from the older games have been removed, which in some cases leads to some great streamlining, but in many others, leads to a lot of the depth that fans in the series may be used to being removed. Things like automatic heals after each battle are not something that I’m going to complain about, particularly since they keep the focus squarely on the actual core gameplay – but on the other hand, seeing all monsters use generic weapons, or seeing equipment aptitude gone, does remove some elements of planning and build minmaxing that fans of the previous games may have enjoyed.

To Disgaea 6’s credit, it does add in a lot to the mix even where it removes a bunch – the most intriguing feature it has is the auto battle, which allows players to thoroughly program how your party members react to the flow of battle to a ridiculously granular degree. You can spend forever playing with these. The amount of depth and wealth of options available to players is ridiculous, and the flexibility with which you can program AI routines for your party puts anything similar that I can think of to shame. 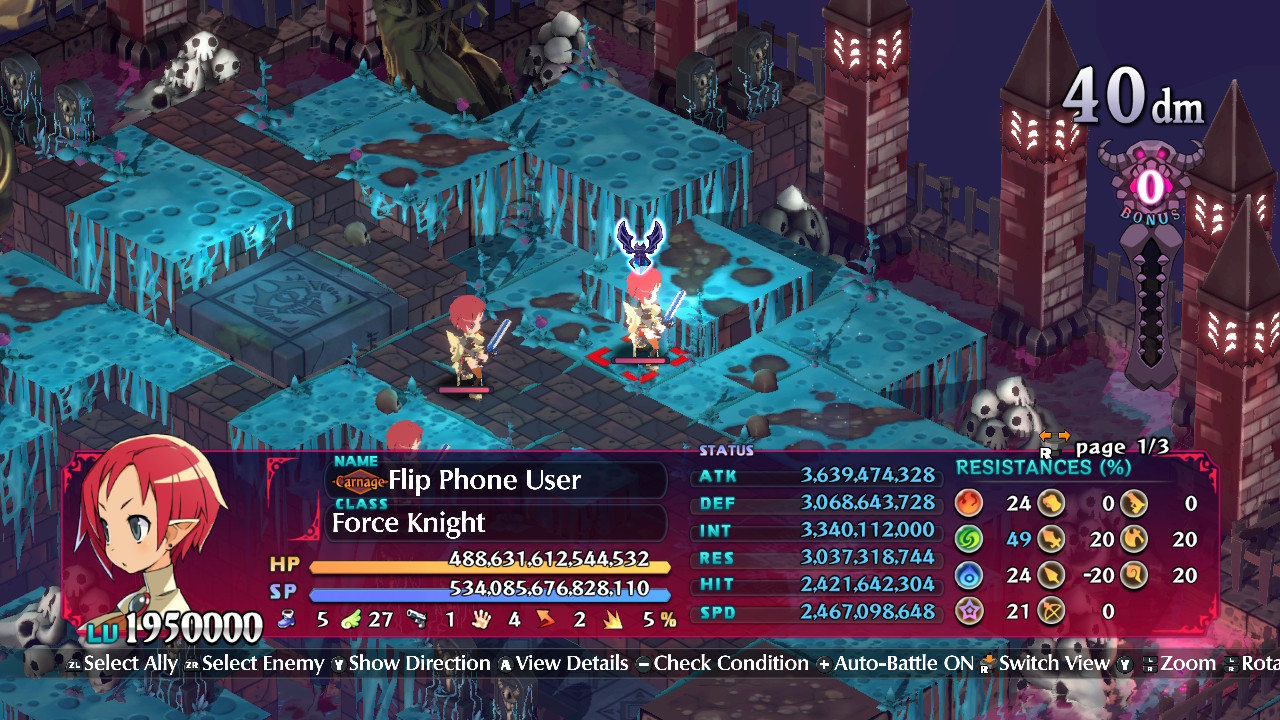 "More than anything else, Disgaea 6 feels like a transitional foundation for future games in the series."

There’s a whole bunch of other changes – outright removals, as I have noted, but also new additions, as well as changes to existing systems. All of this leads to a Disgaea game that is very different playing from the past few ones that we have gotten, while still retaining the distinctly dense nature of those titles (albeit a bit less so). I think if you’re just looking for a systemically packed strategy RPG, Disgaea 6 still fits the bill. It still has a lot going on, and a lot of its changes are even for the better. And QoL elements it adds, such as the auto battling and battle repeat features, which can help literally automate grinding, are absolutely for the better for compulsive min-maxers. Even with the changes it brings to the table, many of which are likely to be divisive, I think there is a lot in Disgaea 6 for fans to like.

What is undoubtedly a dramatic step down, however, is the visual presentation. Disgaea games are not technical showpieces – which is what makes Disgaea 6’s poor Switch performance that much more puzzling. The game simply does not look good on the Switch. Some of this has to do with the blandness of the 3D models over the livelier sprites of the older games, but even otherwise, on a purely technical front, Disgaea 6 suffers. The default mode presents acceptable picture quality, but the framerate can suffer; you get a performance mode, where the framerate is steady, but the game, somehow, ends up looking worse than Disgaea did on Vita, because of how much resolution suffers. There’s a balanced mode, which is a compromise, but it ends up neither looking nor running too well. It’s just a shame overall, because even for a game like Disgaea, where how it looks isn’t really the point, 6 can look distractingly bad a lot of times.

The final takeaway from Disgaea 6 is decidedly complex. It’s not a slam dunk, obviously, and it’s a distinct step down from Disgaea 5 Complete in a lot of ways. But it’s also not the total misfire many fans were afraid it would be. There’s a lot here that works, and works really well, and more than anything else, Disgaea 6 feels like a transitional foundation for future games in the series – if NIS is still around to make them. I’d say it’s most comparable to titles such as Pokemon Ruby/Sapphire, Monster Hunter Tri, or Disgaea’s own 3, which at the time made the jump to HD, all of which had to make some pretty big jumps for their series, and ended up losing a lot of what fans had liked about their predecessors. Those games, including Disgaea 3, ended up being the foundation for several great, beloved by fans, entries in their respective franchises that would follow.

Hopefully, Disgaea 6 can be that for its series. There’s a lot here that’s very good, and NIS seems to be on the right track – they just need to be able to build on it. In the here and now, Disgaea 6 itself is good for what it is. It’s not going to be most people’s favorite entry in the series, to be fairly honest, but it’s still a good, addictive, and deep SRPG that should manage to keep people engaged for a very long time.

The series' traditional charm and humor are retained and in top form; a lot of the streamlining of the cruft and changes and additions make sense and make for a better experience; still compelling and addictive at the core

The graphical presentation is awful, and there is no reason the game should look and run that bad on the Switch; a lot of the cuts are excessive (such as the reduction in classes, or removal of several interesting mechanics); the escalation in damage numbers feels flaccid

Final Verdict:
GOOD
Disgaea 6 isn't the total misfire fans were afraid it would be, and in spite of several stumbles, still comes out as a solid, compelling game that will hopefully serve as a foundation to better, more fleshed out games in the future.
A copy of this game was provided by Developer/Publisher/Distributor/PR Agency for review purposes. Click here to know more about our Reviews Policy.