Posted By Will Borger | On 31st, Dec. 2014 Under Article, Reviews | Follow This Author @bywillborger

Mention Fantasia, and most people’s minds will instantly go to The Sorcerer’s Apprentice, the film’s third and most famous musical sequence, which was based on the Johann Wolfgang von Goethe poem of the same name. Some people might also remember the Night on Bald Mountain segment, mostly because Chernabog is horrifying (though the sequence itself is an incredible accomplishment in terms of animation), but The Sorcerer’s Apprentice is the one that everyone knows, even if they haven’t seen the film. You remember, the one where Mickey is up on this mountain conducting water and the celestial bodies while awesome music plays in the background? Yeah, that’s the one.

Everyone who has ever seen that sequence has thought about how cool it would be to do what Mickey’s doing. Well, someone at Harmonix must’ve thought that it was crazy that there was no video game that would let you do that, and someone at Disney must have agreed with them, because that’s exactly what Disney Fantasia: Music Evolved allows you to do. Seems like a match made in heaven, right? The creators of Guitar Hero and Rock Band teaming up with the most beloved entertainment company of all time – sounds like a win-win to me. This time, though, Harmonix has ditched the plastic guitars, microphones, and drum sets and is asking you to use your arms.

Basically, this amounts to waving, pushing, and drawing patterns in time to some licensed tracks playing over cool backgrounds as Kinect tracks your movements. Wax on, wax off, Daniel-san. Sounds like a recipe for disaster, doesn’t it? Surprisingly, it isn’t. Fantasia tracks your movements pretty accurately, which means that any mistakes are on you. Hit your notes accurately, and the music grows louder and you’ll earn points, multipliers, add new instruments to the tune you’re playing, and all will be right in the world. Mess up, and the song will gradually fade out until you manage to get back into rhythm. Admittedly, the motion tracking isn’t perfect, and you’ll notice the odd inconsistency, but more often than not, you’ll feel like any mistakes you made were your fault, not the hardware’s, and that’s a good thing. 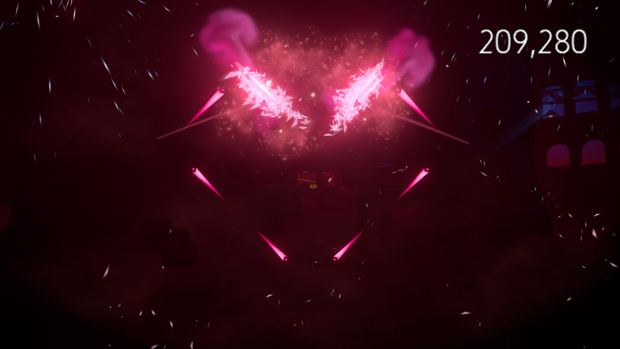 If you were just conducting some good tunes over some cool backgrounds, ranging from space, to the sea, and even a peaceful forest, Fantasia would still be a pretty good game. The music choices, which include both classics like The Police’s Message in a Bottle, Queen’s Bohemian Rhapsody, Vivaldi’s Four Seasons, and even Mussorgsky’s Night on Bald Mountain (because how could they not?) and newer tunes like Lorde’s Royals, Drake’s Take Care and Nicki Minaj’s Super Bass are well-chosen and impressively choreographed, and fit the game’s various backgrounds well, and it’s incredibly fun to bring them to life.

But that’s not all Fantasia offers. Just as the game will introduce more complex motions as things progress, so too do you unlock abilities that allow you to change the songs as you play them. The first thing you’ll get the ability to do is remix songs on the fly, with the player having the ability to swipe and select different instruments at key points during the song, allowing you to mix and match different instrument and vocal tracks together to create a Frankenstein’s monster of a song. Have you ever wanted to add violins and cellos to Jimi Hendrix’s Fire, or a guitar and drums to Night on Bald Mountain? Well, you can, and almost all of it sounds good. It’s a lot of fun, and it adds an air of replayability to every song.

Get a little further, and you’ll get the ability to record loops of music by moving an on-screen icon around in a circle or over a set of “keys” that creates a symbiotic melody for the song. Once you’re satisfied, you can key it into the song and incorporate it into the main tune. It adds a new level of customization to the game, and makes you feel like a consummate musician to boot. 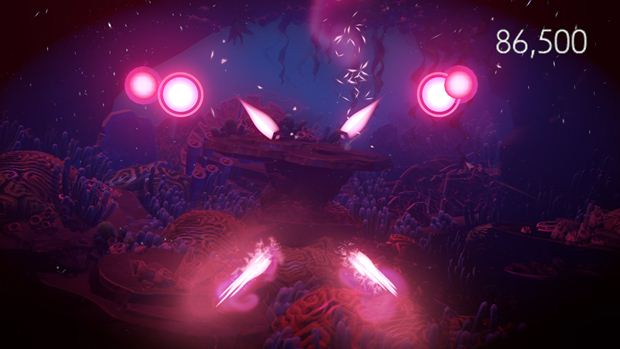 "Disney Fantasia: Music Evolved is the best kind of Kinect game: one that shows off the potential of Microsoft’s peripheral and gets you up and moving in a meaningful way to play something that wouldn’t be nearly as engaging if played with a traditional controller."

All of this comes together with some incredible choreography that brings the music to life, and will get you up and moving. There’s a distinct ebb and flow to the action, and once you get into it, you won’t want to stop. If a music game could ever be said to be well-paced, Fantasia is that game. The upside to this is that the game will get you animated and into the music far more than a traditional control scheme. The downside is that the game can be tiring. You have to make a wide range of motions in Fantasia, and it will take its toll on you after a while, even if you do decide to play sitting down (which is absolutely the wrong way to play, by the by).

All of this is anchored by a rather simple, but charming tale as you become the apprentice of one Yen Sid (the sorcerer from Fantasia; also Disney spelled backwards), and the game follows you as you earn your sorcerer’s hat and visit the various worlds that contain the songs. Some will no doubt find this part boring or childish, but I have to say that, as a fan of Disney and Fantasia, I was enjoying myself, and thought it fit the game rather well. Maybe that’s just me.

Regardless, Disney Fantasia: Music Evolved is the best kind of Kinect game: one that shows off the potential of Microsoft’s peripheral and gets you up and moving in a meaningful way to play something that wouldn’t be nearly as engaging if played with a traditional controller. Like Fantasia itself, it’s somewhat before it’s time. Like Fantasia, it also looks to be the last of its kind, as Microsoft has shifted as much focus from Kinect as possible in recent months. It’s a shame, then, that this may be the peripheral’s best game, and if there were more like it, people would probably be more excited about the platform. As it is now, however, it serves as a respectful ode to a great movie and a great moment, and an encore performance to one of the finest animated films of all time. Well done, Mickey.

Wonderful choreography brings the songs to life. A great track selection. Multiple versions of each track, plus the ability to add your own spin, adds a ton of replay value. Motion controls are very accurate. The story is charming. Makes you feel like a wizard.

Kinect still requires a lot of space. The odd instance where Kinect doesn’t want to do what you tell it to.

This is one of the best Kinect games out there. If you like music, movement, Fantasia, or Disney, you owe it to yourself to give Disney Fantasia: Music Evolved a shot. It serves as a respectful ode to a great movie, and a great moment, an encore performance to one of the finest animated films of all time. Well done, Mickey.

A copy of this game was provided by developer/publisher for review purposes. Click here to know more about our Reviews Policy.
Tagged With: disney fantasia: music evolved, disney interactive, Harmonix, microsoft studios, xbox 360, Xbox One