The NT stands for Not Today, Square Enix. Not Today.

Remember when Sony thought they could compete with Nintendo in the handheld market with the PSP? That was funny – you bought a lot of Square Enix games. Part of that was because the PSP suffered from a dearth of quality titles, due to software piracy and lack of sales and Square Enix continued to support the system when other publishers wouldn’t. It’s also because Square Enix cranked out some of the best games on the platform. It’s hard not to be impressed when you look at some of the games Square released on the platform – Final Fantasy Tactics: War of the Lions, Tactics Ogre: Let Us Cling Together, Crisis Core: Final Fantasy VII, and of course, the two Dissidia games.

Point is, when it came to the PSP, Square Enix delivered. If anything, the most disappointing thing about many of those games was that they were confined to a handheld. People didn’t want to see the prequel to Final Fantasy VII or the first fighting game made up entirely of Final Fantasy characters on a handheld. They wanted to play those games in high definition on their televisons. Alas, for Crisis Core, that dream will probably never be realized, but none of those games suffered for it. The Dissidia games in particular were a delight, marrying an all-star cast with a deeply customizable fighting engine, a ton of single player content, and a lot of new abilities and upgrades to unlock. In short, it was a Final Fantasy fan’s dream that combined the series’ RPG elements with some delectable brawling.

I spent a lot of time playing the PSP’s Dissdia games, both online, locally, and solo, so when Square announced that they’d finally given Dissidia the treatment it deserved, and that the next game was going to be a console title, I was pretty excited. Unfortunately for everyone who is a fan of Final Fantasy, Dissidia Final Fantasy NT is a profound disappointment that actively throws out much of what made the original games great and lacks content, to boot. 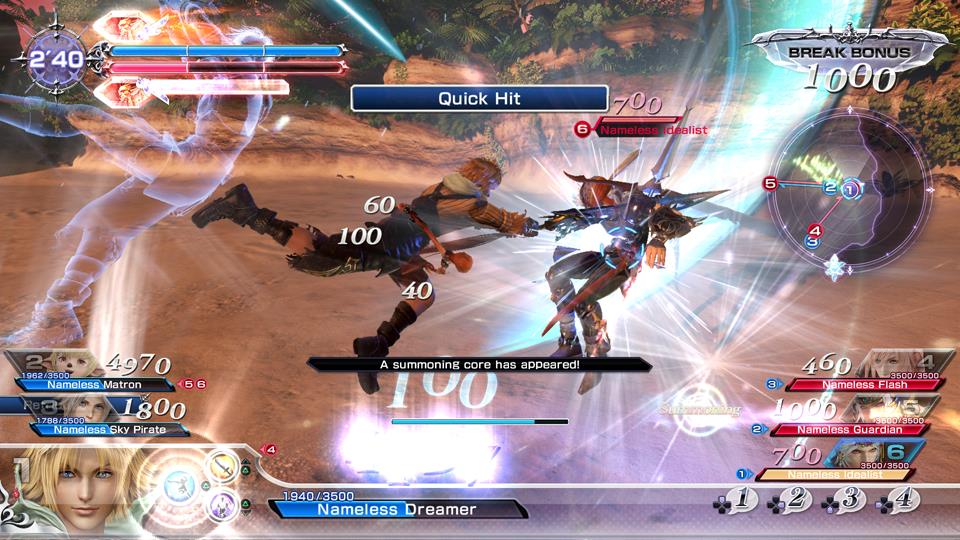 "When I say the game lacks content, I mean it. There are two modes in NT: offline and online. That’s it. Offline consists of a tutorial, practice mode, a gauntlet mode (think your standard arcade mode), and a story mode."

And when I say the game lacks content, I mean it. There are two modes in NT: offline and online. That’s it. Offline consists of a tutorial, practice mode, a gauntlet mode (think your standard arcade mode), and a story mode. The story mode is misnamed, as it’s little more than a glorified cutscene viewer. Worse still, you can’t even play it at your leisure. You have to unlock cutscenes and fights by gathering “Memoria,” which you can only get by running through the gauntlet. The story’s pretty good, but gating the content behind a mindless mode is actively insulting.

It’s understandable though, because outside of the online mode, which lets you battle three on three or one on one, that’s all of the content the game has. Seriously. To make matters worse, the only offline mode that you can actually fight in doesn’t even support two on two or one on one battles. Only training mode does. So you can forget about getting some actual experience against the AI before heading off to fight one on one online.

The incredible lack of content might be fine if the customization options from the original games were present, but alas, Square Enix has removed those, too. The only moves you can change are your characters HP attacks (more on that distinction later), so customizing your bravery attacks to suit our fighting style is out. Admittedly, you can unlock other things, like new summons (you pick one at random at the beginning of the game), and new costumes, weapons, and songs from various games in the series are available in the shop, but the options are all extremely limited, and aside from the summons, entirely cosmetic. You can also acquire treasure boxes (because absolutely everything must have its variant of the loot box now), which yield a set of randomized rewards. Thankfully, so far, these are devoid of microtransactions, but in this era of mindless corporate greed, I’ll be shocked if that lasts. 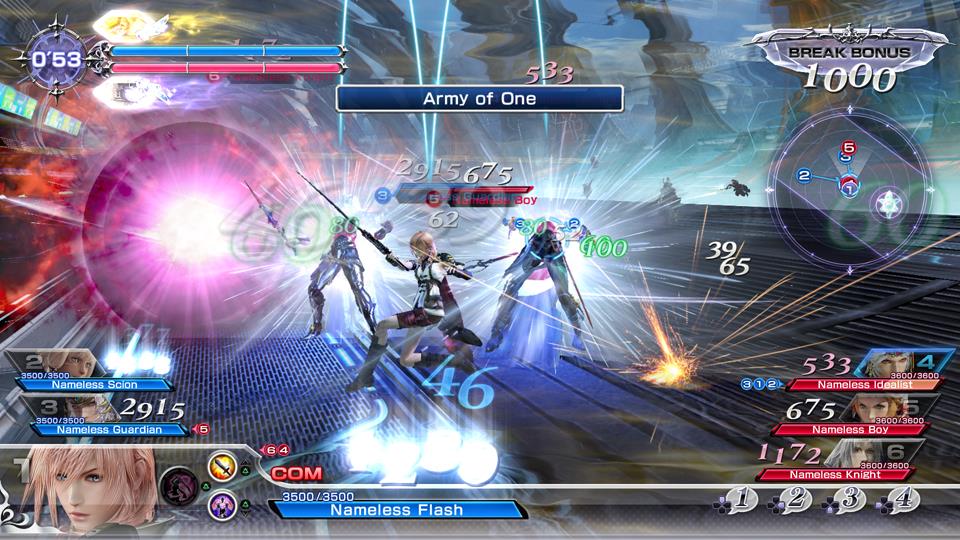 "Couple this with a lack of customization in terms of characters, an extremely simply battle system, and the utter lack of variety in most character’s move sets and the lack of variety jumps off the screen."

I know what you’re thinking: “All of that sounds terrible. The PSP games had more content and they’re nearly ten years old. Surely the gameplay improvements make it for it?” You’d be forgiven for thinking that, but it’s not the case. In fact, I would argue that the gameplay is worse. The system itself is largely the same: your characters have two types of attacks: Bravery attacks and HP attacks. Bravery attacks are non-lethal, and hitting an opponent with them knocks down their Bravery and builds up your own. Building your Bravery is important, because your Bravery determines how much damage your HP attacks do. Build your Bravery so much that it’s over an opponent’s health, and you can knock them out in a single swing. There’s also character specific skills – magic spells and buffs and the like – and summons, but none of that mitigates the fact that the gameplay is a step down from the PSP games.

The problem is that NT’s Dash mechanic – which was the staple tool for extending combos in the original games and is supposed to serve the same function here – lacks speed and feels off, while many of the strikes themselves lack a sense of impact. The chaotic nature of the 3 on 3 fights doesn’t help, as everyone is often bunched together, often cluttering a screen already overrun with one of the worst, most overstuffed UIs I have ever seen. Couple this with a lack of customization in terms of characters, an extremely simple battle system, and the utter lack of variety in most character’s move sets (everyone only gets one HP attack at a time and there are only a few Bravery attacks) and the lack of variety jumps off the screen. There is some variety in how the fights play out, as you can choose to play an elimination game (where you knock out three of you opponents; they can revive) or one where you’re tasked with taking down the enemy’s core, but that doesn’t keep most matches from feeling the same.

This is all a very long-winded way of saying that Dissidia Final Fantasy NT is a profoundly disappointing game that fails to live up to its predecessors. Some will excuse the lack of content by pointing out that it is a port of a Japanese arcade game, but that doesn’t excuse the complete lack of effort that’s present here. In a world where Netherrealm continually puts out great games packed with content, where Capcom has finally made Street Fighter V worth your money, Arc Systems Works continually puts out games like Blazblue, Guilty Gear, and the newly released (and excellent) Dragon Ball FighterZ, and even 10 year old PSP games are better designed, this is unacceptable. This game is for the die hard fans only. Everyone else should spend their money on a good fighting game instead.

It looks good. There are many characters to choose from.

Poor, overstuffed UI. Basically no offline content. Story mode makes you play arcade mode so you can earn items to unlock more story mode. Complete lack of customization available in the PSP games. Battles are mechanically simply and lack variety. No 1 on 1 or 2 on 2 modes offline. Dash mechanic is slow and imprecise. Hits lack impact.

Final Verdict:
BAD
In an era of standout fighting games, Dissidia Final Fantasy NT's lack of content and character customization and mediocre gameplay mark a step down from previous games in the series and an unacceptable lack of effort from Square Enix. Fans of Dissidia should stick with the PSP games. They're better.
A copy of this game was provided by Developer/Publisher/Distributor/PR Agency for review purposes. Click here to know more about our Reviews Policy.