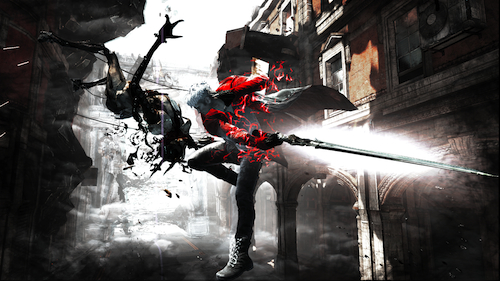 Unlike previous Devil May Cry games, DmC is being developed by Ninja Theory, responsible for the Playstation 3 flagship title Heavenly Sword, averaging 79% on Metacritic.

DmC will follow a much younger Dante, before he went all hipster with his ivory hair, in his early days of demon slaying. It will also take place in ‘Limbo’, a twisted version of reality which is home to all of the demons. Actions and events that occur within Limbo also affect those in the real world, an interesting twist on the Devil May Cry environments of yesteryear.

Capcom have confirmed they will be showcasing DmC at E3, so we can expect to see a whole host of new details and gameplay.

DmC hits shops on 15 January 2013 in North American and Europe on Xbox 360 and Playstation 3 and expected to reach PCs some time later on in the year.

For more information on DmC, visit the Ninja Theory website.